Getting started with the ABAP in Eclipse SDK

Aim of this document

We want to make it as easy as possible to get started building plug-ins using the ABAP in Eclipse SDK. This document tries to collect all available information on one page. It features links to the official documentation, tutorials, existing community projects and a lot more. If you think something is missing make sure to notify us via the comments so we can add it.

1) How To Guide – Walks you through a simple example. Shows you how to build your own RESTful resources on the server and invoke it from the client side

2) Javadoc for the released APIs

Both the How-To-Guide + Javadoc and be downloaded here: http://scn.sap.com/docs/DOC-40894

Adding Javadoc to the IDE

After downloading the Javadoc its a good idea to add it to your IDE. This way it gets displayed directly in your IDE.

Without the Javadoc no documentation is available in the IDE.

You have to configure the Javadoc location for each .jar your plug-in references:

2) Right click on the .jar which needs the Javadoc reference

3) Select the menu item “Properties” in the right click menu

4) The following pop up should be shown. Configure the Javadoc location

Now, the Javadoc should be displayed.

“Starting with ADT SDK is easy” by Martin Steinberg

Shows you how to build a simple transaction launcher.

Shows you how to extend the existing transport organizer view. Adds the possibility to create a transport of copies with just one click.

Several community members have created plug-ins with the SDK. You can learn a lot by studying the source code of these plug-ins.

The ABAP in Eclipse team worked closely together with the core SAPlink team on the plug-ins for Eclipse. The plug-in shows you how to:

– create a wizard which incorporates the ABAP in Eclipse transport page

– use the transport API

– read and write files to an Eclipse project

– create a new program from Eclipse

– call backend RESTful resources from the client side

Allows you to design ABAP classes and interfaces by using a UML modeling tool. After the design step it is possible to create the modeled entities in the ABAP server. The plug-in shows you how to:

Create new ABAP classes and interfaces in the server repository via the client APIs. Be aware that the plug-in uses unreleased APIs to achieve this.

When creating a new Eclipse plug-in project the tooling give the possibility to start with a simple example. These example are great to get started with basic concepts such as: adding new views, menu items, … 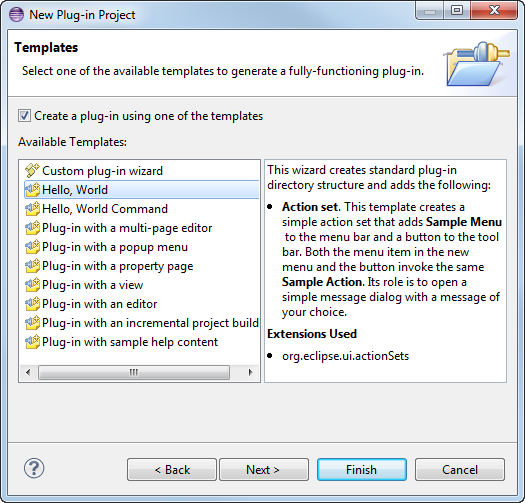 Eclipse contains tools which assist you while building plug-ins:

Menu items can be inspected by pressing ALT+SHIFT+F2 before executing the mouse click which opens the menu.

Learn more about it here: http://www.eclipse.org/pde/incubator/spy

Use it to track the communication between the client and the server. Open the view via menu “Window -> Show View -> Other…”. Click on the green play button to start tracking the communication.

Where can I ask questions?