The Founding of Academy Cube gGmbH

There have been many exciting changes at Academy Cube in the past months: about 11,000 talents have registered, offices have been opened in Spain, Italy and in the German-speaking countries, and we were able to attract new partner companies such as CISCO and Versino as well as several new partner universities all around Europe. Additionally, Academy Cube gGmbH was recently founded as a non-profit organization based in Berlin.

The Founding of Academy Cube gGmbH

The job and training platform will move forward and continue its work as a nonprofit organization known as Academy Cube gGmbH. As an independent organization, Academy Cube will continue to fight the shortage of skilled workers and the skills gaps in today’s industry 4.0 (Internet of Things) working climate.

More details you can read in the press announcement (in German) published on November 19th, 2014.

In order to roll out the Academy Cube all over Europe national offices in Spain (Real Academia de Ingenería), Italy (jobadvisor) and in the German-speaking region (PDAgroup) have been set-up by regional partners.  They have been reaching out to the political and business communities and introducing the Academy Cube at events with executives, political decision-makers and at universities as well as at career fairs to ensure that Academy Cube lays a strong foundation with a local touch in each country.

Events with high visibility have been for example:

In addition, Academy Cube took part in career fairs all around Europe in 2014 and had representatives present at numerous partner events.

About 11,000 talents from all over the world have registered and have been using Academy Cube to attend e-learning seminars and/or apply for jobs. “With Academy Cube I found a practical way to start my professional career,” Academy Cube talent Georg Trenovski (33) from Austria explained. 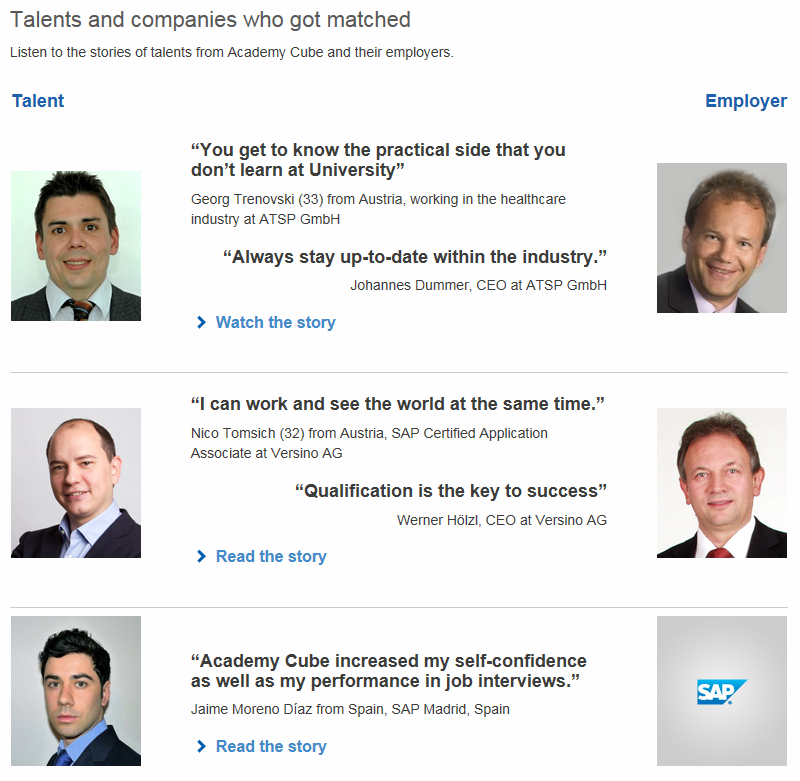 Further success stories can be found here: Academy Cube experience of talents and their employers.

The Academy Cube is on track to become THE successful job and e-learning platform due to the fact of the unique matching functionality of competencies between talent
profile, job profile as well as competencies delivered by e-Learnings for up-skilling.

In order to attract even more young jobseekers in Europe to the platform, Academy Cube will continue reaching out to them on social media and intensifying its collaboration with European universities. At upcoming events such as the 2014 European e-Skills Conference in December or at SAP FKOM in January 2015 new partners will be attracted.

Academy Cube’s goal for 2017 is to have at least 150,000 registered talents that can apply to more than 30,000 jobs and are able to attend more than 2,000 e-learning courses. Academy Cube expects approximately 300 industry partners to join the initiative in the future as national offices across Europe and beyond will accelerate the international roll out.