What is real-time in ABAP and why ABAP Channels?

But what does real-time mean for the running business? From the business user point of view, one of the most important definitions is low latency, meaning how fast the application responds to a click or other user interaction (independent on a computer or a mobile device). Ideally users expect that the input data is processed within milliseconds and they receive immediate responses.

Real-time means also always having the latest up-to-date information about application data and state (e.g. the current stock market prices, airline seat availability, latest deadlines for delivery, accurate information on inventory – value, status, receipt, location and disposition), and react in real-time to incoming events. The events can be of various nature and span from the simple notification (e.g. the vacation request was approved in the system), broadcasting (e.g. new repurchase prices are available and must be distributed to the users), process control information (e.g. delivery of sales orders took place, the billing process for customers can start) to events, which require immediate reaction (e.g. illegal trade pattern is detected). Another aspect of real-time is best support for collaborative scenarios (e.g. business users work on the same data records, collaboration platforms, interaction centers).

All in all developing real-time applications in ABAP is about the fast, event-driven, highly interactive and collaborative scenarios, which must be supported in ABAP applications.

How is it implemented in ABAP? ABAP development for SAP HANA enables real-time processing for huge amounts of business data by exploiting the strengths of In-Memory technology. Using SAPUI5/SAP Fiori on top of AS ABAP offers real-time UI experience and simplified business interactions by means of intuitive highly-responsive consistent UIs across multiple devices. The ABAP channels complete this real-time offering by supporting interactive and collaborative scenarios based on event-driven paradigm independent of database (yes, not only on HANA!) and UI (yes, it works also ‘as prototype’ for Dynpros!). ABAP Channels infrastructure is general available with SAP NetWeaver AS ABAP 7.40 Support Package 5 (SP05).

As described above, one of the important real-time characteristics is immediate access of users to the frequently changing business information and data in ABAP backend, which will support timely business insights, decision making and productivity.

The examples for this can be for instance bringing the irregularly and often changing product information and sale conditions to browser UI (SAPUI5, Web Dynpro ABAP, BSP) as soon as data change takes place in the ABAP backend, pushing short-lived financial data relevant for trades to the browser UI, statistics, process information (sales figures in different areas, financial statistics, manufacturing process status). In all these cases the data presentation on UI (charts, diagrams, text and numbers) must be updated immediately accordingly to the modified data in the ABAP backend.

In such situations in order to present the latest up-to-date information from the ABAP backend in real-time on the browser based UI most ABAP applications used polling techniques with multi-seconds intervals or refresh button periodically to get newest updates to UI. These approaches are quite resource consuming result in insufficient performance and poor user experience. The availability of real-time data in ABAP backend is unpredictable and it is unnecessary effort to make requests and open and close HTTP connections.

The ABAP Push Channel (APC) technology replaces such inefficient polling approach through WebSockets. ABAP Push Channel is bi-directional message based communication channel representing the WebSocket integration in ABAP, allowing e.g.to push notification to the UI as soon as data change in ABAP backend happens. This is a sign for a user to request the changed data from ABAP backend and update UI. 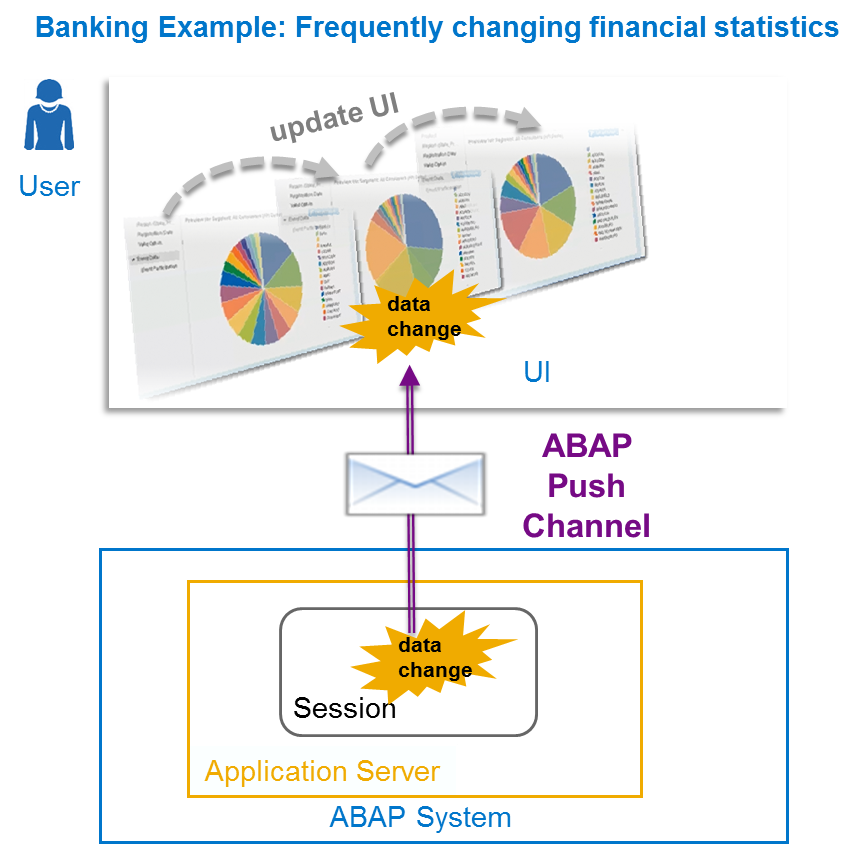 More details about ABAP Push Channel and step-by-step guidance how to implement it in ABAP in Masoud’s Blog:

Other aspect of the real-time behavior is reacting immediately to the events. Event-driven communication between ABAP sessions across the boundaries of ABAP application servers will streamline the business process workflow, speed up performance and reduce the rate of consumption of database resources. An ABAP application might need to identify and react to certain events in the other ABAP session as soon as they occur. Moreover an ABAP application might involve data processing in order to provide some output to be delivered to another application, running in another ABAP session and therefore has to send notification. Traditionally to realize such real-time event-driven behavior ABAP applications often poll periodically for the state information on the database. Bottleneck problems on the database may occur with numerous active polling from many ABAP applications simultaneously.

One of the examples of such real life situations can be long running calculations (sales statistics, loan calculations). A user may initiate a loan calculation (via asynchronous RFC) and it is running so long, that he is not any more interested in the status of calculations and the results and may want to proceed with another actions. In such case the running session (initiated e.g. by RFC) only consumes resources and the calculation must be stopped. In current implementations the ABAP application polls for the status of the calculation on the database. Another example is long running batch jobs (mass data changes, create deliveries from open sales orders, create invoices) which process data gradually. To simulate the real-time behavior, the calling ABAP session polls in short time intervals on the database for the status in order to request already processed data or get updated information.

Another example is the business workflow e.g. the manufacturing process, which consists of several productions steps (e.g. manufacturing of components), which are initiated in parallel by the central process (e.g. assembling) on different application servers and must report back their status as soon as they get accomplished. The central process would need to poll on the database periodically in order to get the status of the productions steps. All these situations result either in heavily loaded database by batch jobs, bottlenecks, or by resource- and time-intensive applications reducing database performance.

Instead of using periodically polling technique, a publish/subscribe mechanism can be used for prompt notification which can eliminate unnecessary database load. The ABAP Messaging Channel (AMC) infrastructure replaces the polling through publish/subscribe mechanism and acts as a broker for the messages exchange between different ABAP sessions, which can reside on different ABAP application servers. After ABAP sessions act as publisher and receiver respectively, as soon as an ABAP session publishes notification to AMC, all subscriber ABAP sessions get notified. 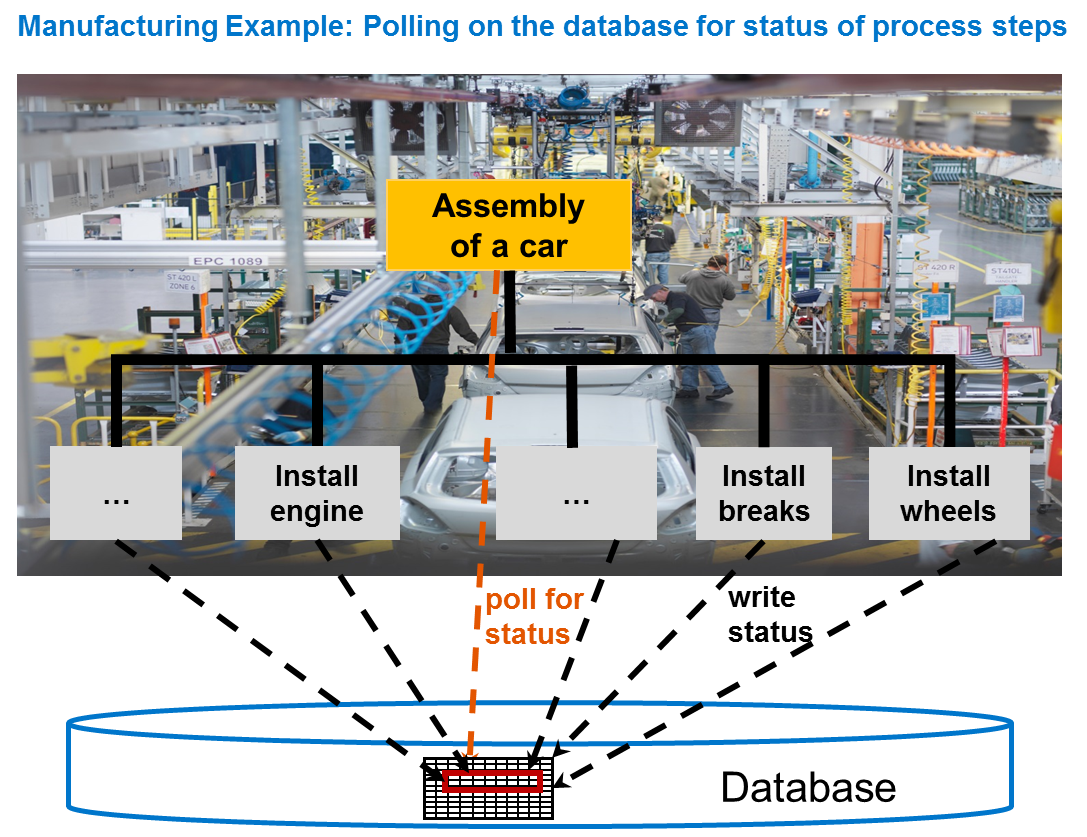 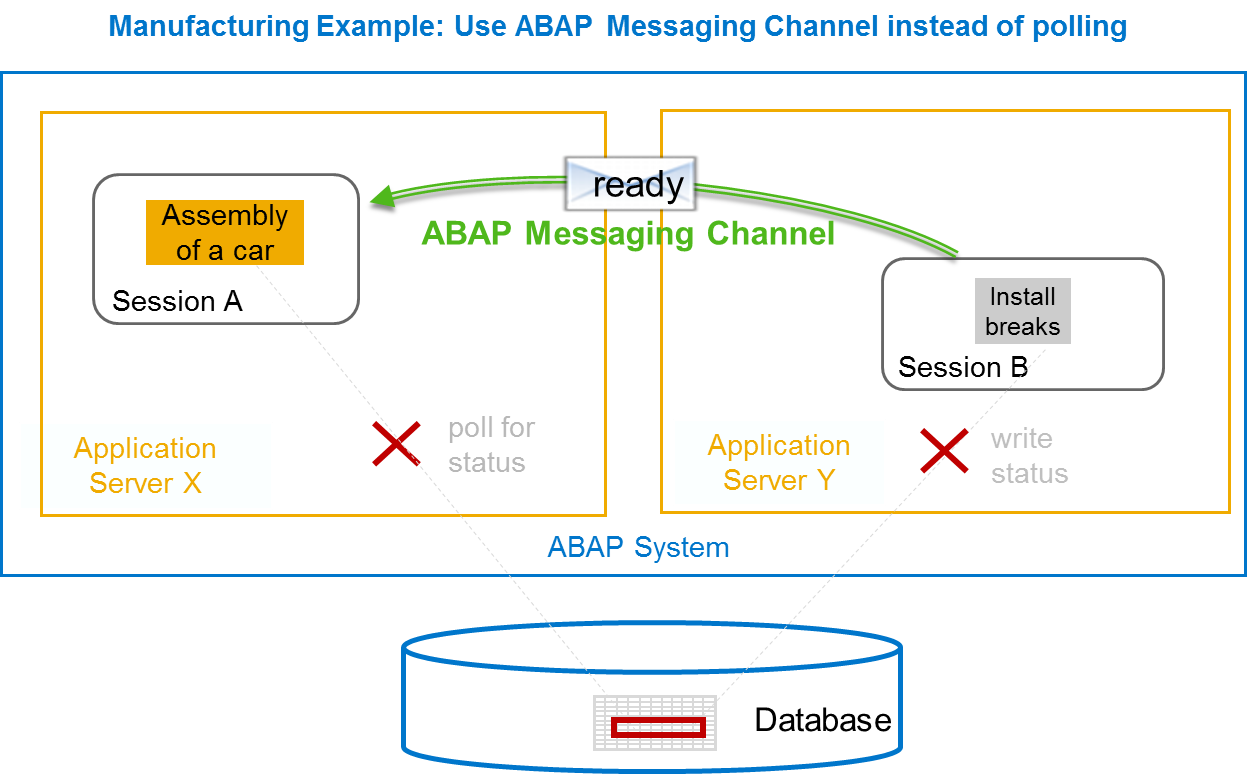 More details about AMC and step-by-step guidance how to implement it in ABAP in Masoud’s Blog:

Another essential element of the real-time business are real-time collaboration scenarios, which allow multiple users in different locations in internet to communicate instantly or work on the same business objects simultaneously sharing the same backend resources and even allowing collaborative real-time editing. Applying this to ABAP would mean for example SAPUI5 users in different ABAP sessions which reside on different ABAP application servers can communicate (send messages) and work together on the same ABAP business data records.

Another real-time scenario would be collecting the data from any kind of hardware device (e.g. traffic control tool, medical equipment, RFID scanner, vehicle tracking control, multimedia system, etc.) in the ABAP system and display them on the UI, or react to event (robot reached its destination in the warehouse,telephone call/chat arrived in the interaction center) in ABAP system with subsequent UI update with latest data without having to poll for the data changes.

In situations when multiple users work with the same data (e.g. customers or suppliers information) in the browser UI, and one user changes several data records, they must be updated immediately on all other user UIs.

If one goes a step further there are also scenarios of collaborative real-time editing of business object data in which multiple browser UI users have to edit jointly the data of the same ABAP object and modified data should be displayed on UI of other users in the real-time without having to lock the whole object. More details about using AMC/APC for collaboration and step-by-step guidance how to implement it in ABAP in Masoud’s Blog: