here is my personal summary of Teched&&D-Code in Berlin. It was my first time and I was really impressed of this event. I just focus on some of my courses I attended because I think this reflects the whole event in my opinion and I don’t want to just repeat my statements with other words.

Evolution of the ABAP Programming Language

This was an awesome experience to me. Very well prepared and a lot of good examples. I’m absolutely fascinated about the powerful new features and ABAP it’s on the way to get a really cool syntax. As Lukas already mentioned in his blog I was also confused in the workshop itself and couldn’t get all the point there. This wasn’t a fault by the experts; it was me, because I was too long thinking how I could use a statement and therefor I missed some important information about the next one…

All I need to add besides Lukas entry is a big thank you to the presenters for a very well prepared session. Maybe you can check your examples and implement the SAP name-convention (I had a small conversation with Uwe about it), because it was sometimes a bit confusing if we were talking about a variable, structure or a table, but that is a really small detail to argue about.

CDS was a big point to me. Jasmin did a great job and I really liked the way she was presenting it. In my opinion CDS is the next major step to prepare systems to switch easily to HANA. I think a lot of customers will have an easy switch to Hana without having big trouble when implementing constantly CDS in the custom developments. Not  the right spot to talk more about this topic, but if you are a developer and don’t know about it, search SCN 😉

I went here, because I was a bit confused why SAP develops the next IDE. Eclipse isn’t that long established and now there is again something new? That question wasn’t solved by the workshop, but I can understand why SAP Web IDE is introduced. I liked the examples and it really looked very easy, but in my opinion I think there is more than just click – template – click – WYSIWYG (my new favorite word) –test – done … but, the experience factor from my first try to that what it was shown in the demo seems to be on a good way right now.

After a talk with Thomas I got the information, that the version-saving and also the test-environment might be the major reasons why it is published in the “cloud”. So if anybody out there thinks it is going to replace Eclipse… forget about it.

I found that picture right next to the fiori cafe and I absolutely agree with the sentence “Be our frontpage”. Additional to that I got a theory about the 135degrees, but if anybody exactly know what is meant by it, please leave me a comment 😎

I’m not sure what to say to this Code Review, because I did not understand half of the time, because of problems with the microphone and that the “tent” was placed right next to the roadmap-guys (and their microphones worked perfectly fine). What I took out of this was that I got the chance to find my speed-problems with an HTTP-Listener and the Gateway itself sends nice statistics about separated by the different components. So pretty cool in the end, but I hope the organization fix this next year.

DataViz Challenge with Doctors Without Borders 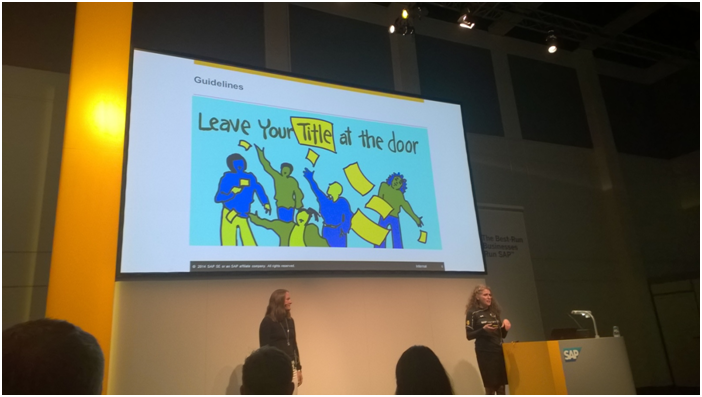 My personal highlight! I reversed my plans for Wednesday to join this event. It was absolutely worse to be an Attendee here. DwB is so important and it was a pleasure to spend some of my time to perhaps give them a new insight in their data. Of course, it was also great fun. Our team was really international; we had the following countries on the desk: Sweden, France, Netherlands, Denmark and Germany (Hope I remember it correct).

Team Tiger (who thought this is a good name?) ends at forth place, which isn’t important by the way.

I booked this Hands-On and liked the presenting. Screen Personas is a very cool tool the business waited for a long time. To me it seems that the tool is robust and I will have my tries to implement some screens. Also nice, that Steve has introduced some real life examples and talked about the pitfalls he and his company went through. What I didn’t like here was the hand-out. Not because it wasn’t exact that what was shown in front. I expected something I could reuse at home and have also some additional information in my hand. Luckily I know the SCN-space

As a moderator of the space and of course one of the biggest fans from ABAP in Eclipse I took my time to attend in this mini codejam with Thomas. A lot of people showed up and that is pretty cool, because Eclipse shifts the experience to a new level. Not all people had a notebook-seat and so after a group of attendees recognized me as the moderator of the space we had a really good conversation about what to expect from eclipse and I hope I could get their mind on the way to AIE.

This was a great session right before leaving d-code. We started talking at the planned time and my first thought was, that not much people joined us. So we started talking about SCN and what could be improved and during that, one after one joined us and in the end we had a nice community-event with a lot of active SCN-members. Lukas received his present from over sea and the Sleepless on SCN-Photo was introduced next/after this session. All I cann add here is that Moshe /Marilyn and the rest of the SCN-team doing a great job! Keep going and thank you for listening. 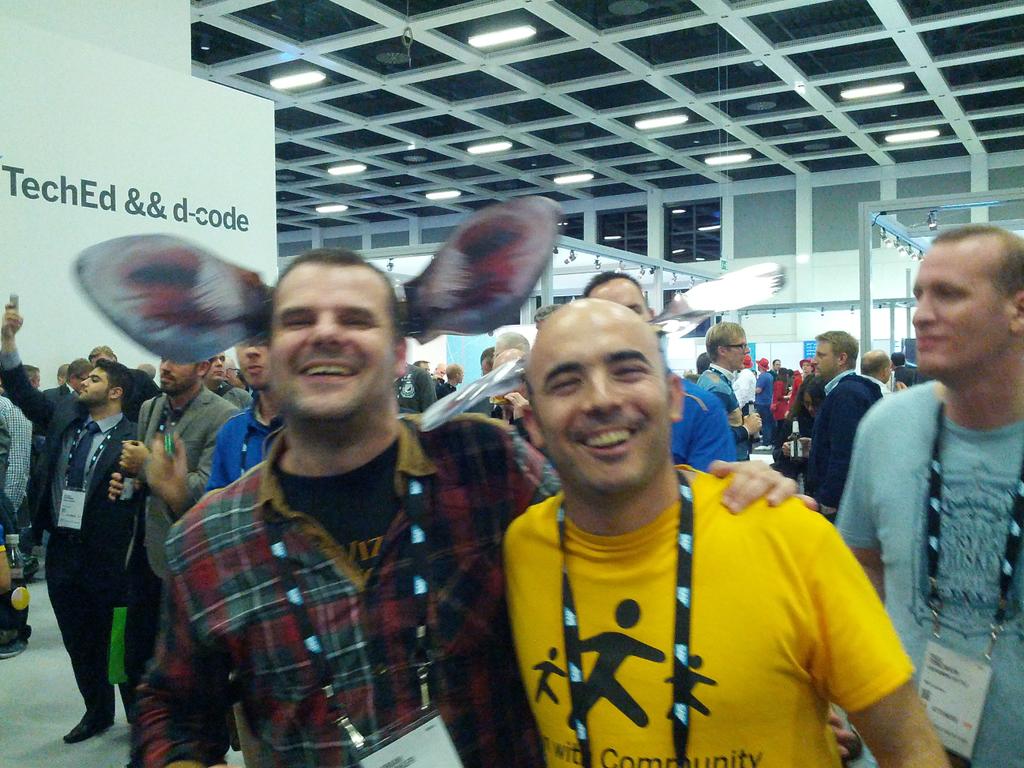 That’s it. I could mention a lot more people here, but the message remains the same: Attend to such an event if you got the chance to, you will not regret it! 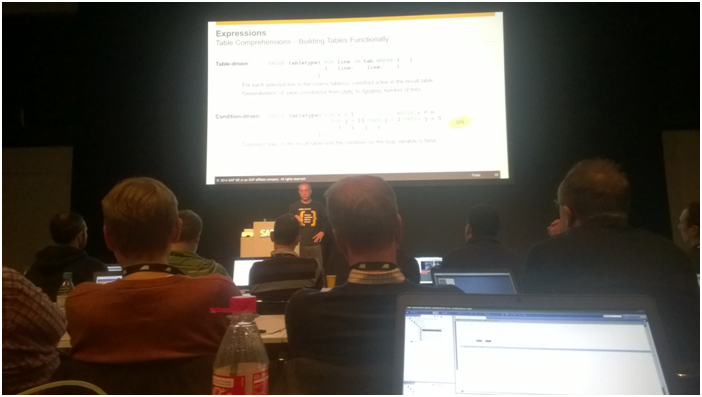 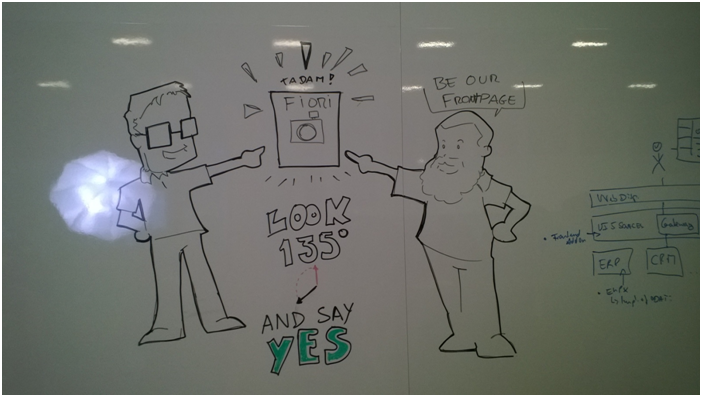 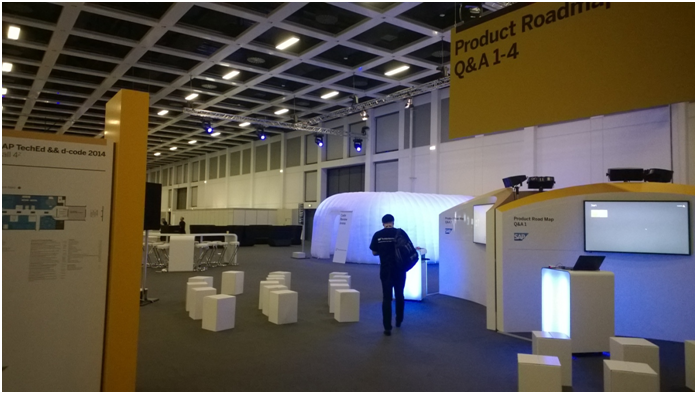 I see you are wearing Moshe's ears

One thing - I can't see your Doctors without Borders pictures - could it be Chrome?

I thought it would be a good thing, if not just Moshe had to do it. I took his second pair to ally with him.

You're right, the pictures do show up in Firefox.

Separately, and regrettably, I haven't attended an SCN moderator meet-up since I became a moderator.  I attended one back in 2010 but I wasn't a moderator....I have to attend one again!

It was great meeting you and I had a lot of fun with you. Thank you for giving me the courage to widely use the ears!:)

Hope to see you soon,

thanks for the job and great meeting you in Berlin.

And I have to say, I'm a bit jealous, should have asked Moshe Naveh to borrow his ears as well 😉 .

You visited DEV202 and CJ626... but you definitively missed the hands-on sessions on ABAP for SAP HANA. Yet, help is near, make sure to join us in the Virtual Hands On session (SAP TechEd Virtual Hands-on Workshops) for DEV265 ("Building an End-to-End App from SAP HANA via ABAP to SAP Fiori", 4h Hands-On) or DEV263 ("Building ABAP Applications Using Code Pushdown to the Database", 2h Hands-On) 😎 .

you are absolutely right. It wasn't enough time for all the sessions I wanted to attend. Thank you for the link. This is a great option and I will take it.

PS: I will spend my weekend with your paper End to End Development Example in SAP® NetWeaver 7.4&SAP®HANA 😉