The best things in life are free.  Another beauty of life is not knowing what’s going to happen. Anticipation is often more thrilling than acquisition. As data gets bigger and the technology becomes better at interpreting it is easy to think that anticipation will become rarer. Will there come a time where you don’t even need to think?  With forecasting becoming better, decisions that used to task us will become “no brainers”.  However, as we have seen with telecommunications, we are not all working from home for 4 hours a day and driving to work in flying cars.  Joking aside, the human element means there will be different decisions to make perhaps more important ones that rely on understanding of people rather than flows of data.

This tutorial entitled PAL: 74. Time Series – Single Exponential Smoothing Measures looks at the new forecast accuracy measures that available with single, double and triple exponential smoothing and other algorithms with SPS09 provided by the SAP HANA Academy.  This document is for the busy people out there who just want to know what I always wanted to know when software changed.  What’s new? Will I need retraining? 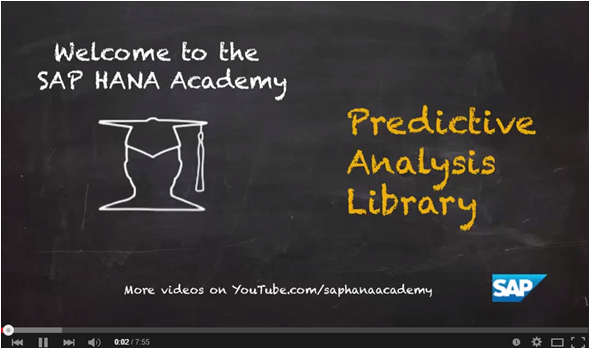 The tutorial starts by showcasing the documentation before using prebuilt tables and code to demonstrate SPS09 in operation.

There are five things that are different in SPS09 when using Exponential Smoothing Measures.  The first is the way you call.  The second is a new optional statistics output table which you don’t need to specify for backwards compatibility. Both are shown below. 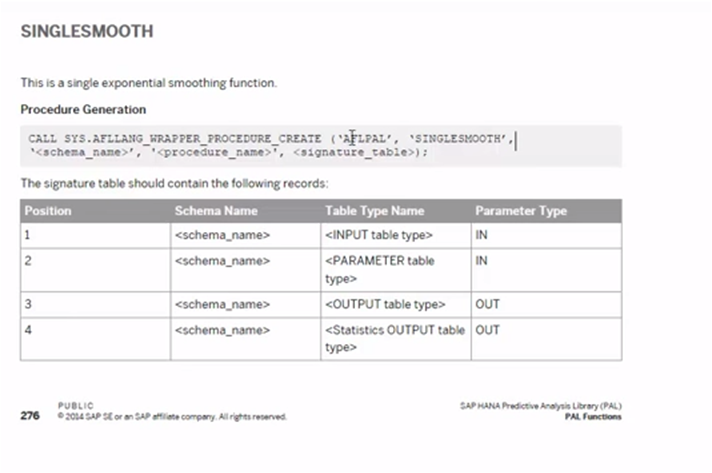 There are also some new parameters. The third difference with SPS09 is the parameter MEASURE_NAME which allows you specify up to 9 statistical measures. 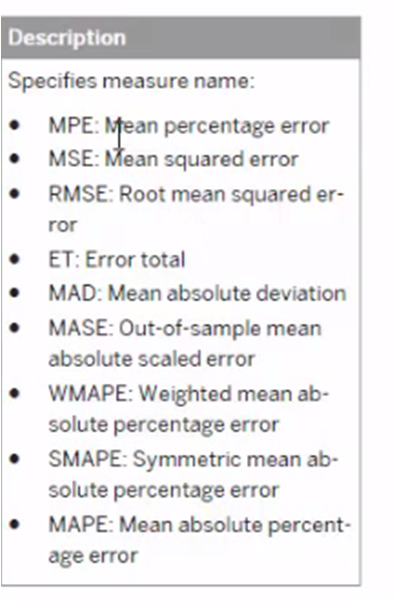 In SQL view in the default schema with the DEV_USER you can use these parameters as below. 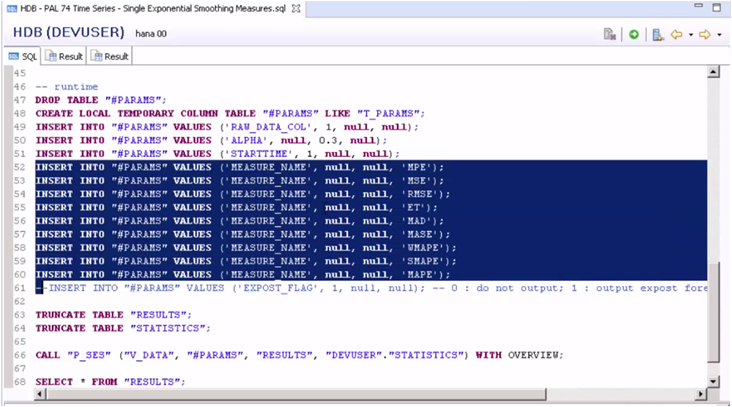 The code will return values in a separate table as below.  Note you don’t have to use all 9 measures. 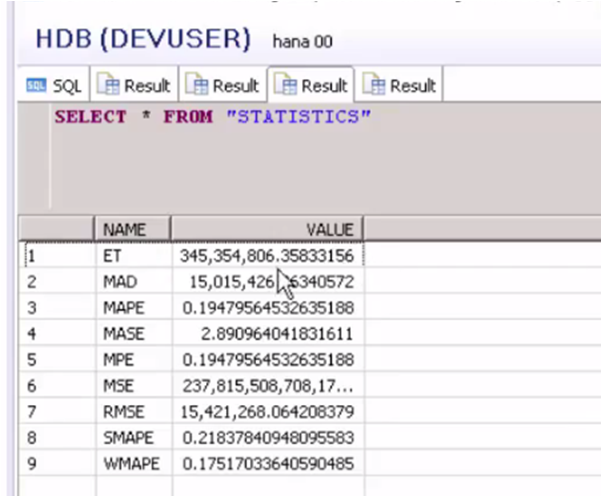 The tutorial then shows an example of this working when logged on a DEV_USER.  It is at this point that Philip reminds us of the fourth thing that is different in SPS09. You should use capitals not lower case when indicating whether tables are in or out. The highlighted code above shows the additional type of signature table.  This is the optional output type referred to earlier for your statistics table. Also notice the order of parameters and the name of the schema being separate in SPS09. 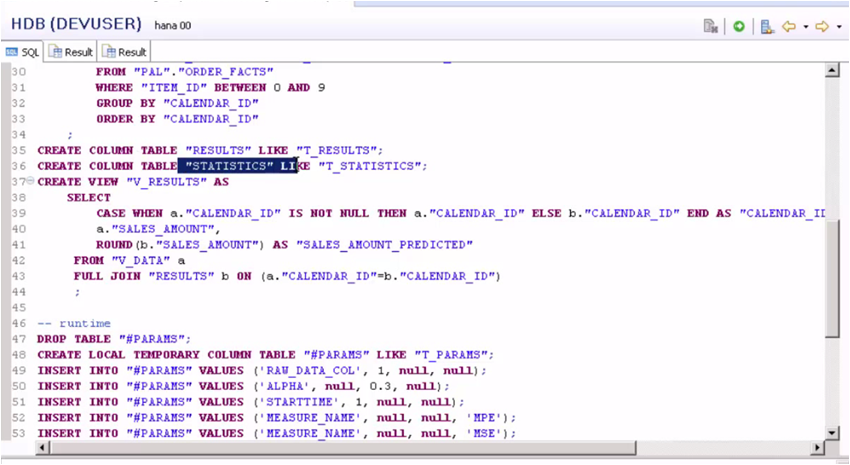 The fifth difference introduced by SPS09 is that you need to specify the location of the schema you want to create your new procedure in, previously you had to store it in SYS_AFL.

When you run the code above you can see the results table has the smoothed data which goes all the way to a new value which is one month ahead with a forecasted or predicted amount. 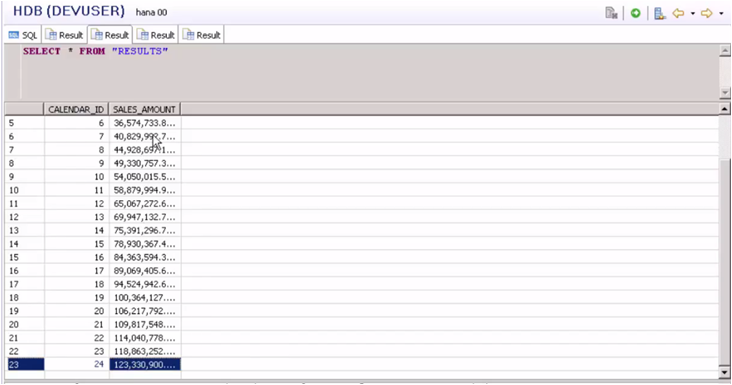 If we go to the last results table you will notice that it takes the original data set and joins it with the predictions and the smoothed values. 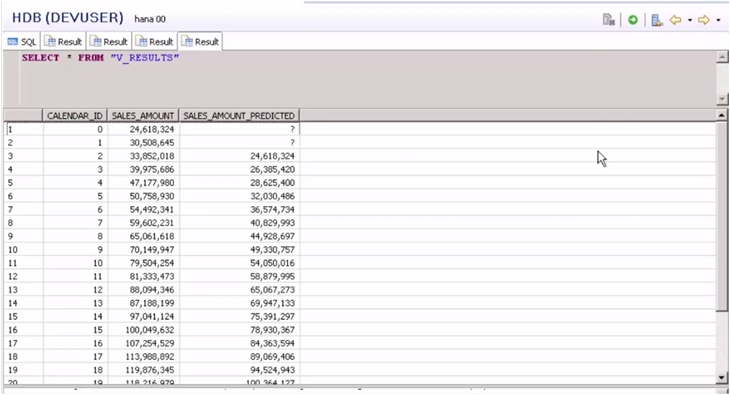 Will I Need Retraining?

I don’t think retraining will be an issue.  The tutorial confirms this by moving onto using data from previous videos to make charts in SAP HANA.  There have been no changes in functionality or the interface which is a comfort to developers, most of whom want improvements in the back end and for SAP HANA are less interested in having more charts. The new statistical measures, rights needed for the DEV_USER (covered in Philip’s previous tutorial), parameters, output tables and increased options for saving your schema have been neatly integrated into SPS09.  Continuity of interface is an increasingly a selling point of SAP products.  A point I covered in a chalkboard I will share some time.  So this improvement in Exponential Smoothing was going to look more like an evolution. I suspect even if radially different with a huge increase in functionality there would be efforts to keep the developer from needing to re-skill.  This is fitting with the current SAP strategy regarding customers and partners and is to be expected given that the platform is the same.