Canadian Robot Goes to Work – Even When it Snows!

Ivan Bowman lives in Halifax, Nova Scotia, 1888 km away from the SAP Waterloo Labs office in Ontario. However, when colleagues in the Waterloo office want to talk to him, they walk across the hall and ask Ivan to pop by when he’s free. For the last seven years, Ivan has telecommuted via a robot that his colleague, Ian McHardy, created and named IvanAnywhere.

When Ian’s manager encouraged and supported his team to spend a portion of their time on innovation and professional development, Ian used standard robotics components, as well as a tablet and moveable webcam, to construct a working telepresence robot that Ivan can control by using a gaming joystick. Colleagues stop by and chat face-to-face with Ivan, just as they do with local co-workers. 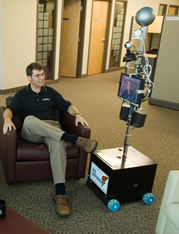 The robot allows Ivan to quickly: 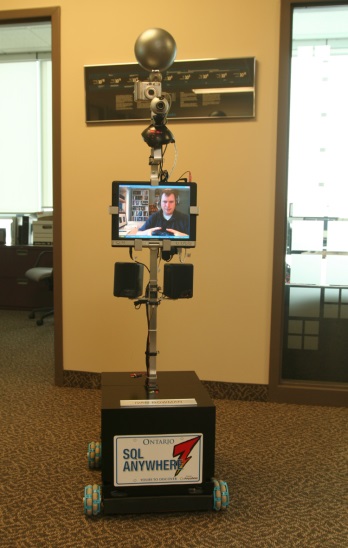 One advantage to having a physical robotic presence is that Ivan can maintain the casual human interaction and sense of community that characterize
the collaborative and close-knit culture of SAP Waterloo Labs. One great example is the YouTube video that Ivan and his colleagues made that is a spoof on 2001:A Space Odyssey, with Ivan in the starring role as “Hal”:

In Canada we show up to work even in a snow storm!

Ivan if you can shovel my driveway in -40 you will really impress!