The only thing worse than a complex, difficult-to-resolve problem is a simple problem made complex and difficult to resolve by human errors, foibles and just plain bad ideas.

I imagine it was a manager exasperated by such challenges who came up with this infamous (and profane – you’ve been warned) problem-solving flowchart, a PG-rated version of which I’ve had one of our great graphic artists recreate here. I first saw a typed version of this in the boxes of my sister’s 1980’s paperwork she was cleaning out. The fact that it has survived from mimeograph to meme is proof of the enduring appeal of horribly bad advice, tongue-in-cheek advice. 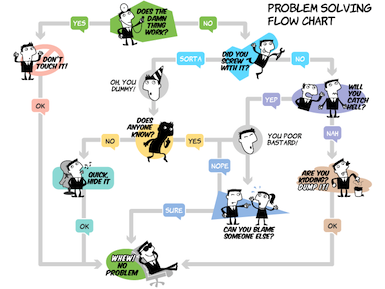 So, in that spirit, here’s how to ensure a simple problem gets much, much worse:

It’s not a problem if it’s not your problem, right? This is an excellent time to show how good you are at delegating by delegating this nightmare to someone else. Your new intern, for example. Hey, it’s a learning experience!

Your team is totally hitting all its checkpoints and your unit tests are going great. The guy from user experience needs to understand what minimum viable product really means and stop being so unrealistic about what your customers want. It’s totally fine that it takes seven steps to save a document.

It’s important that you prove to your manager that you can handle anything. Asking for help just shows weakness and lack of resolve. It’s your ability to keep going straight forward, no matter the results, that really shows your leadership potential.

Sure, you’re technically the project manager, but it wasn’t your fault that sales took three weeks to get back to you with their numbers or that IT never got around to installing the software you asked for.

You believe it’s important to be really invested in your work. So if anyone criticizes this project, you should totally react as though they kidnapped your child. Everyone knows that shouting loudly and/or bursting into tears helps motivate people to do their best work.

This is not the same thing as lying about it. If your manager asked you why the redesign was six months late and 50% over budget, you’d totally tell her. But in the meantime, there’s no reason to be a Debbie Downer and bring it up at status meetings.

7. Don’t learn from the past

Just because other people have tackled similar issues before doesn’t mean you have anything to learn from them. If they knew so much, you wouldn’t have the project now, would you?

You’re just not a negative person. If you read the latest progress reports, it’ll just depress you, and that’s no way to go through life. You get enough negativity from that member of your team who keeps bringing up missed checkpoints. Also, if you keep doing what you’ve been doing, eventually the results will be different, right?

There’s no point in solving just this one problem when you really need to solve these three related problems, and for that you really need to get buy-in from two other department heads. Also, maybe what this company really needs is different project tracking software to begin with.

10. Lie about your results

Everyone knows that the metrics were unreasonably high to begin with, so it’s not like nudging your numbers up is really that big a deal. Everyone does it, and no one ever, ever gets caught. Plus, you’re just right-sizing them to where they would be if other people had done their jobs correctly.

Of course, this IS all tongue-in-cheek and my advice is the exact opposite:

1. Own the problem. It’s what the grown-ups do.

2. Engage stakeholders. You know, the ones whose interests you are serving.

3. Ask for help. Whenever, however, whatever, early and often.

4. Own the blame. Blaming others is one of the fastest ways to lose respect.

5. Commit to success without taking things personally. Maintain perspective at all times.

6. Be open about problems. Hiding issues only makes them worse. Address them head-on, right away.

7. Learn from the past. There’s no bigger time-waster than repeating avoidable mistakes.

8. Don’t try to will problems away. They won’t fix themselves on their own. I promise.

9. Contain the issue. Don’t try to hide it within a bigger issue.

10. Be honest about results. Honesty is, still, the best policy.