here I’d like to give you a wrap up about my dCode session CR717 about the SAP Web IDE WYSIWYG aka Layout Editor which I held in Berlin on Tuesday, 11th November 2014 – and which will be part of #sitNL 2014. I did the preparation together with my colleague Tino Butz, who held the same session in Las Vegas. Few words about me: I am a JavaScript developer at SAP in Walldorf (Germany). In my session I first introduced the SAP Web IDE and after that I walked through the tutorial “Less Coding, More Designing: The New SAP Web IDE Layout Editor” from my colleague Lisa Monshausen (a how-to guide “How to use the Layout Editor of SAP Web IDE” by Wolfgang Scheer is also available).

I put the source code of the app – which was created with the “Fiori Starter App” template – onto Github – CR717.

You can import it as ZIP into a folder into the SAP Web IDE by right clicking the folder and selecting “Import -> Archive”. There you choose the file and don’t change the default settings.

To run the application select the file “index.html” in the Repository Browser and choose “Run –> Run with Mock Data” in the menu.

You can modify the Detail.view.xml and the Master.view.xml in the Layout Editor. 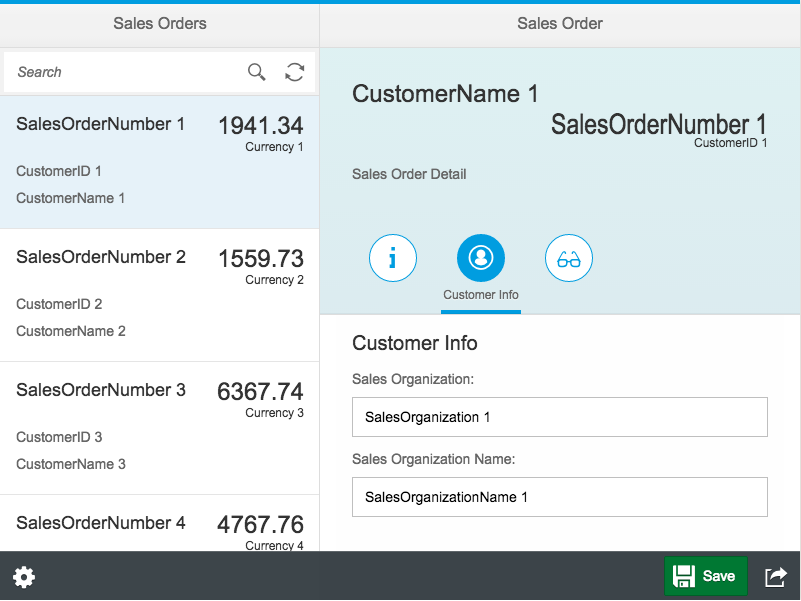 Here are the different sections from the layout editor: 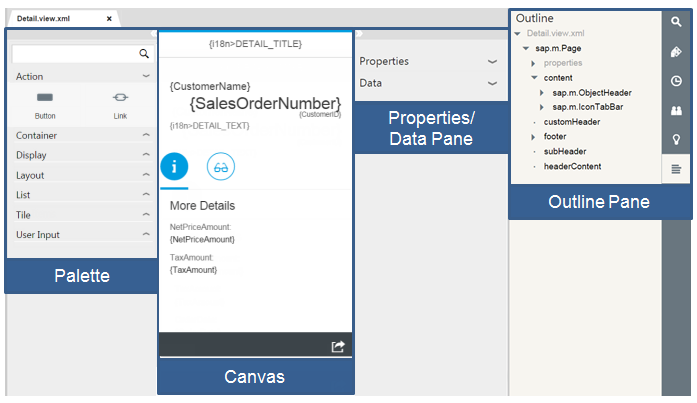 If you have an XML view right click on a file and choose “Open with –> Layout Editor” to start it up in Chrome. 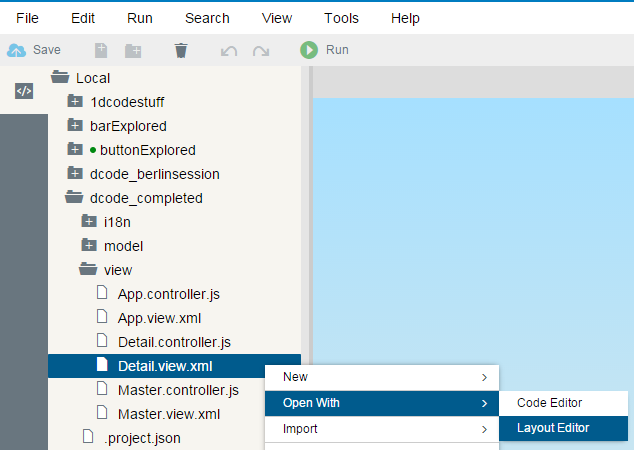 There are several things which make me very excited about the layout editor. First off all: I am a visual oriented person – I’d like to see an instant preview of what I am doing.

With the layout editor I can have a quick look at my view, without starting the whole application and write code for setting up the navigation. 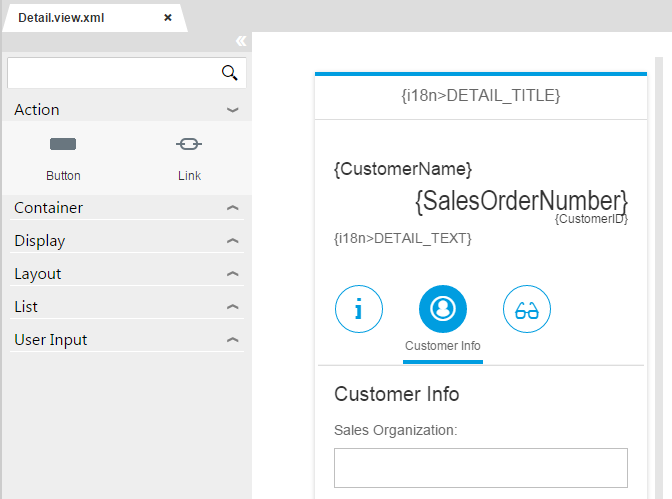 In the palette I can get a quick overview of the currently supported controls which are draggable into the view area and can be modified in the layout editor. There are a lot of different controls in UI5 and I really like to snoop around in the different categories like layout or input to see what is available. 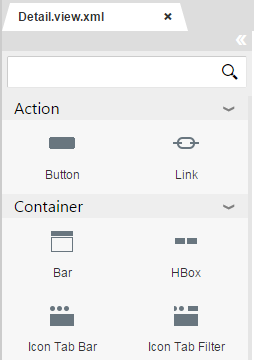 Buttons for example have a lot of different properties which can be manipulated. In the properties pane I can play around with those properties and see an instant preview of my changes. For me it is really good to see which are the most common properties of a control, so that I am able to learn how to use those controls. 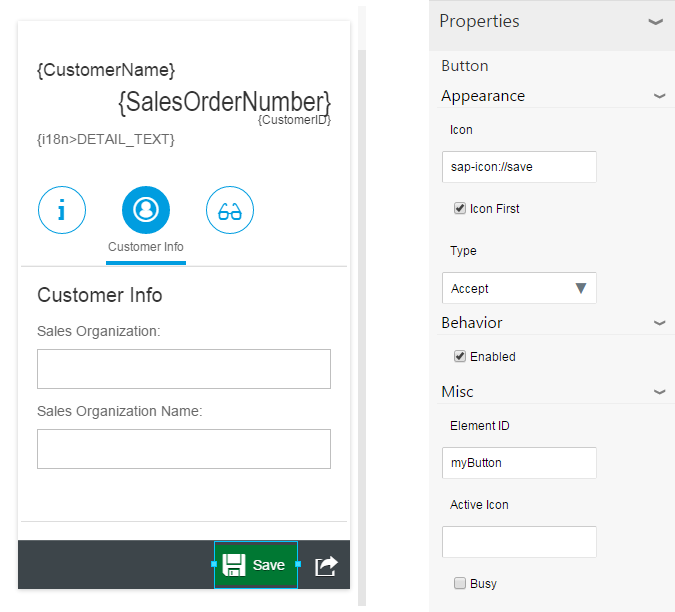 It is pretty handy to grab a control and just place where you want it to be – I mean in contrast to sniffing through XML code and finding the right place “manually”. 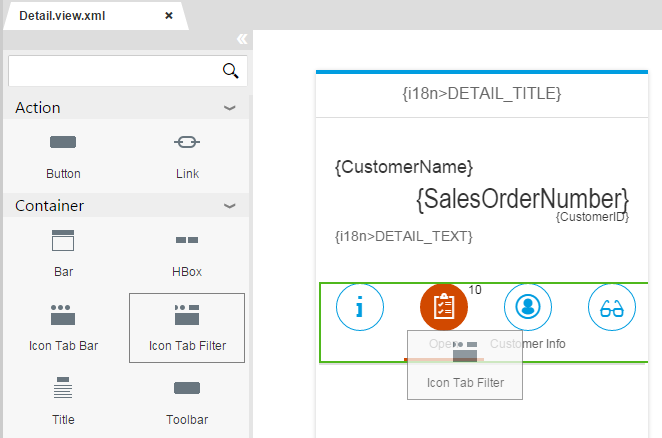 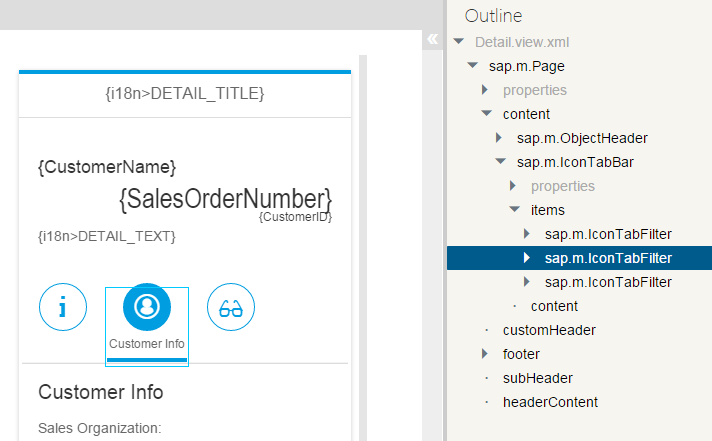 If you select in the outline pane for example the value of a list item, the data binding pane pops up and there you can see the different properties of the collection. 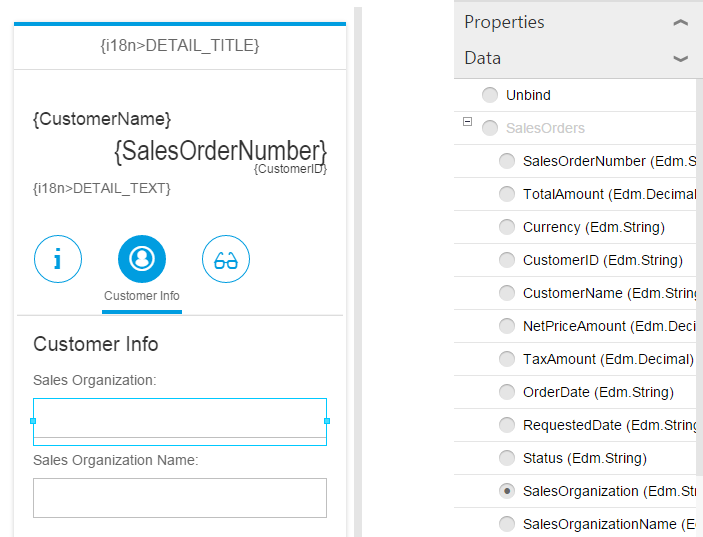 And now we come to my favorite feature:

There is a documentation about the keyboard support available.

At the end we had enough time for Q&A. Here is a wrap up:

As stated above, the Layout Editor is currently available only on trial and works at the moment only in Chrome.

It is possible to display controls which are not supported by the Layout Editor, it means you can only manipulate them through code.

Actually there is no support for defining the events of a control in the properties pane.

The Layout Editor is in “developer preview” – so bugs could happen. When you restart the SAP Web IDE, it also restores your opened files. If one file crashed the layout editor you can get rid of the files which would be restored via url-parameter which is documented in our user settings:

The Layout Editor can be a big benefit to quickly put together a layout and manipulate the controls. It works like a charm when editing the file in the code and layout editor at the same time, so you can have a quick view at your changes without saving. Try it out for free with Chrome.

If you want to provide feedback to the Layout Editor you can put it here.

If you have specific problems or questions I’d kindly ask you to open a new question here in SCN and put in into the SAP Web IDE category.

The cool stuff is leaving the igloo ... 😉