How Will The Internet Of Things Really Work?

Thanks to The Internet of Things (IOT), millions of “hyper-connected” smart homes, smart cities, smart refrigerators, and smart cars are coming down the pike, with the promise of helping people and businesses run simple while creating an estimated $65 trillion in global trade. A never before seen powerful infrastructure must be able to accommodate the massive volumes of data these “things” generate. 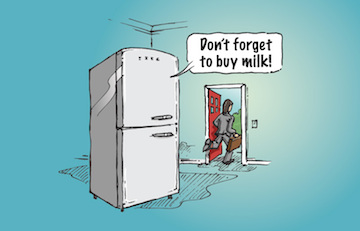 Thankfully, today’s smart businesses are building a new communications fabric that is uniquely suited for IOT. How are they doing it and what challenges are they facing along the way?

According to Dan McNamara, Chief Executive at Keytree, the backbone exists to handle the large data stream being generated from everyday objects but the industry-at-large still needs to figure out why IOT adoption is important in the first place.

“We have to understand where this technological experience is going to meet human experience,” McNamara said during a recent SAP Radio broadcast. “I think that focus will make the adoption of the Internet of Things much stronger.”

Denis King, SVP of Global Field Operations and Strategic Alliances at Solace Systems agrees, believing the real appeal of IOT is when the story lies close to the end user, the smart device, where people can make intuitive decisions. So what happens when 30 million applications connect to an infrastructure?

“There’s been an incredible amount of R&D in advancement and innovation in instrumenting and lowering the cost of the sensor and the devices,” said King. “And there’s actually been quite a bit of work in the analytic space moving from the traditional business intelligence to more real time predictive analytics.”

King believes the IOT infrastructure, communications standards and what data actually makes it back to the cloud of a data center needs to evolve.

Christine Hertzog, Founder and Managing Director of the Smart Grid Library believes there are many potential uses and benefits for different IOT stakeholders – and this creates privacy issues.

“There is definitely a monetization of this data and monetization can create privacy issues,” said Herzog. “It’s going to be important to keep in mind where ownership of that data should reside and what rules need to be put around it.”

IOT privacy comprises much more than people, according to Hertzog. For example, if data is being generated on the energy consumption of a building that becomes a privacy or competition issue as a business may not want competitors knowing how their business is doing based on that energy consumption data.

“It’s not a person, it’s not an individual, but it is an individual company and there might be some sensitivity to that data,” said Hertzog.

The killer IOT app may be here soon, thanks to the high level of interest in smart cities, buildings and transportation.

For example, air conditioning, lighting, fire alarms are all systems and can cede into central network. This can become a bit more advanced, possibly a bit more intelligent and behavioral based, which is already starting to happen, according to Keytree’s McNamara. “There’s a good business case with sustainability goals and efficiencies to be considered so I see smart buildings being an area of interest,” he said.

And even though home automation, smart metering, manufacturing, oil, gas and mining are catching on to IOT, according to King of Solace Systems, railways are benefitting from IOT big time. Some of the largest railway systems in the world have quadrupled the number of sensors on tracks to control trains better.

“And for every single mile an hour faster they can make those trains go with better control saves them in the order of $200 million on the bottom line,” said King. “These are use cases that we don’t hear about or we don’t talk about, but certainly ones that we see quite regularly.”

“There’s fair amount of automation involved so that may be a killer app for them. It includes traffic flow and alleviates one of the problems or complaints of the citizens of that city have and it helps to make it more livable.”

Listen to this SAP Radio broadcast in its entirety here and talk about “things” with me on Twitter @TClark01.

Learn more about IOT and the Networked Economy here.

Internet of Things for Business: SAP is Making it Real

The Ubiquitous Internet of Things: Managing Cities the Smart Way

Thanks for the helpful article.

"IOT privacy comprises much more than people, according to Hertzog. For example, if data is being generated on the energy consumption of a building that becomes a privacy or competition issue as a business may not want competitors knowing how their business is doing based on that energy consumption data."

“And for every single mile an hour faster they can make those trains go with better control saves them in the order of $200 million on the bottom line,” said King. “These are use cases that we don’t hear about or we don’t talk about, but certainly ones that we see quite regularly.”

These two paragraphs simply impressed me.

I find the traffic data very interesting in order to solve the congestion problems that many city centers suffer.  Many people lose hours a day because of these issues (traffic jams and looking for parking spaces), not to speak of the energy costs.

Hi Miguel, couldn't agree with you more on both points. And if IoT proves to be an innovative way to reduce traffic snarl, I am all for it!

Personally I can't wait for traffic data to reach levels where not only I can reroute to avoid traffic, but prevent the congestion all together. Look at this video on how a traffic jam appears without a bottleneck being present just because drivers don't keep enough distance, brake a little to keep more distance and a chain reaction of small brake actions create a jam.

If the first car that needed to brake 'told' the other cars what he was up to the next drivers wouldn't have to brake and could probably just suffice with releasing the gas. This way a lot of traffic jams get prevented.

Or just think about the information that is probably already available on what lane to keep when entering a traffic jam. But I'd prefer to keep that information to myself, if you catch my drift. 😉

I see this phenomenon happen all the time near me. I'll be riding along on the highway at a normal pace and out of nowhere, hit a traffic jam. I always assume there's been an accident or maybe construction going on. 9 times out of 10, the traffic suddenly opens up for no apparent reason.

With an increasing number of devices getting an IP address, new applications such as SAP Predictive Maintenance & Service, SAP Manufacturing Execution, and SAP Connected Logistics as well as others based on the SAP HANA Cloud Platform will enable IoT deployment. SAP Services & Support needs to be taken into considerations for secured network of connected businesses. These trends require cross LoB collaboration.