With the newly released AS ABAP 7.4 SP8 we have further enhanced the features relevant for Code-Push-Down and DB-Near Programming. The focus has been further strengthen the ABAP Platform as the Sole-Master for all optimized development for HANA. Regarding all the new features introduced in the last release AS ABAP 7.4 SP5 take a look at this blog: New ABAP for HANA features in SAP NW 7.4 SP5

So what is inside this release for ABAP on HANA developers?

Open SQL is a DB abstraction layer in ABAP that defines a common semantic for all SAP supported databases.

Several limitations concerning the Open SQK in terms of support standard SQL features (SQL92) have been removed starting with ABAP 7.4 SP05 in such a way that Open SQL can be used with the new advanced features for access to SAP HANA and as well as other database platforms. 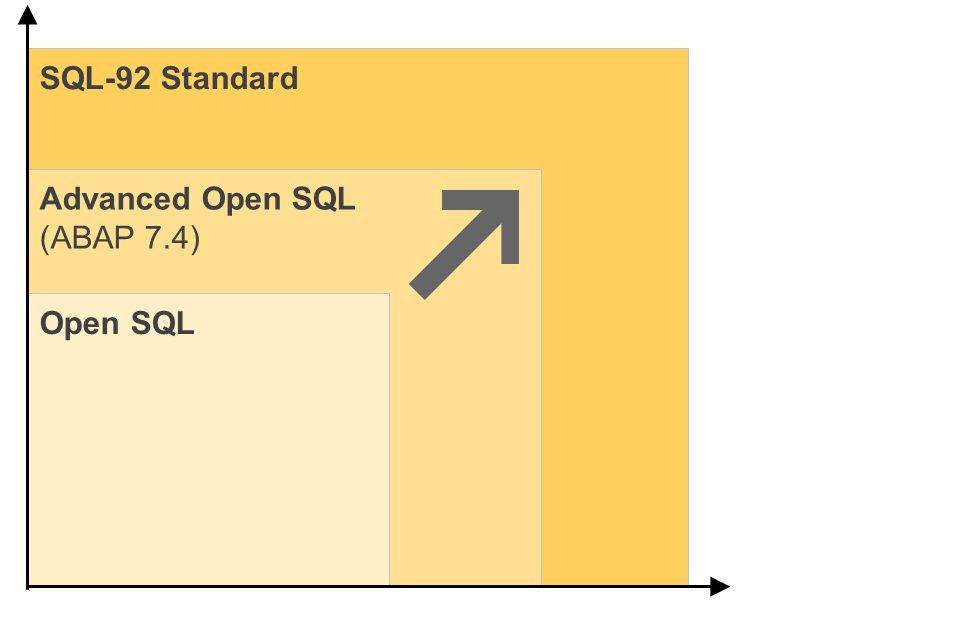 The key idea here is that the Code Push-Down for HANA can start with ABAP Open SQL with the advanced features of Open SQL.

Just name few of the features that have been introduced,

You could also use the Brand new Open SQL Console to play around with the new features of Open SQL.An overview about the new Open SQL features introduced in AS ABAP 7.4 SP8 by Horst Keller can be found here ABAP News for 7.40, SP08 – Open SQL

Alongside the advances in the Open SQL CDS was also offered starting AS ABAP 7.4 SP5 as the next generation model for database access with the goal simplifying and harmonizing the way how data models are defined and consumed independent of the consumption technologies. This is yet another avenue for optimized database access and code-push down to the database.

An overview about the new CDS features introduced in AS ABAP 7.4 SP8 by Horst Keller can be found here ABAP News for 7.40, SP08 – ABAP Core Data Services (CDS)

Advanced Open SQL vs CDS – When to use What?

Here is short guideline on when to choose which technology

Just a recap of ABAP Managed Database Procedures (AMDP)   another amazing feature for code push down introduced in AS ABAP 7.4 SP5.

AMDP allows you to do code-push down to HANA and is ideal in cases where there is  scope for making use of HANA specific features during code push down. AMDPs enable you to create database procedures directly in ABAP using e.g. SQL Script and to seamlessly integrate it in modern ABAP development. An AMDP can be implemented using an ABAP method.

More details about AMDP can be found in this document ABAP Managed Database Procedures – Introduction and the video tutorials in our YouTube Channel: ABAP for SAP HANA – YouTube.

The beauty of using AMDP is that fact that ABAP remains the sole master for managing the entities for code push down but at the same time the application can take advantage of consuming HANA specific features using AMDP.

With the AS ABAP 7.4 SP8 release AMDPs have further been enriched with the following features,

An overview about the new AMDP features introduced in AS ABAP 7.4 SP8 by Horst Keller can be found here ABAP News for 7.40, SP08 – ABAP Managed Database Procedures (AMDP)

With the latest release of ADT the ABAP Development on HANA becomes even more exciting. The new version the tool has several features that make the developer’s experience more fun filled and productive

Just to name a few,

An overview of the new IDE features available with the latest version of the ADT tool by Thomas Fiedler  can be found here ADT 2.31 – New version of ABAP Development Tools available now

I hope the news about the latest features introduced with AS ABAP 7.4 SP8 excites you. The new AS ABAP 7.4 SP8 Developer Edition is already available since 25th September 2014 – See here for more details Developer & Trial Editions: SAP NetWeaver Application Server ABAP and SAP Business Warehouse powered by SAP HANA for more details. Please check back on this ABAP for SAP HANA for detailed information of the new features and how-to use them.

Thanks Sundaresan for brief overview.

Its a good article .

The document came very handy when am checking for new features in SP08.