Confessions from the Managing Director of SAP Labs Canada

For the next few weeks my incredible team will share with you all of what makes us unique and proud to be a part of SAP Labs Canada.

In the spirit of sharing, I thought it was time to share a secret of my own.

With all the #MadeInCanada tweets I post, SAP Canada pins I wear and “eh”s that I use (in every sentence) people are often shocked when I tell them my secret.

I was born in the USA and on the 4th of July no less.

It was August 1965 when I arrived at Vancouver International Airport with my mom. I was 6 weeks old. My dad had made the trip a month ahead of us to set up his new office in the Psychology Department at Simon Fraser University. It wasn’t until forty five years later, in August 2010, that I finally decided to apply to officially become a Canadian citizen.

Why would I want to become a Canuck (that’s a nickname for a Canadian by the way) you ask?

First – I wanted to be able to vote! It’s hard to live somewhere without a voice to influence public policy.

Second – I absolutely love Canada and I wanted to show my commitment to this amazing country.

Last – It was really about time, don’t you think?

Being born on the 4th of July has always made me a proud American. And, in November 2011, I was one in a room full of proud new Canadians swearing allegiance to the Queen. I now have the honor of carrying two passports: one from where I was born and one from where I was raised. No matter which way I travel across the longest international border in the world I am always welcomed home.

I was thrilled in 2012 when offered the role of Managing Director for Canada to accept as a full-fledged Canadian.

The entire SAP Labs Canada team is delighted to share with you what makes this country so special and how our Made In Canada innovations are helping the world run better @SAP.

That’s another secret we don’t want to keep anymore. 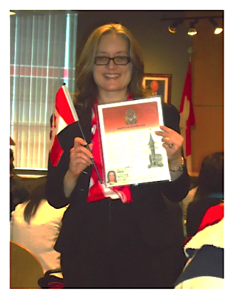 Congratulations on your dual citizenship from another dual citizen (New Zealand and USA)! As it happens, the use of "eh?" to end a sentence is also a speech pattern that differentiates North Islanders from South Islanders in NZ. It's just not as well-known as among Canadians, eh? 😉

Nice to meet another dualie, eh! Thanks for your comment. I'll proudly use eh as a Canadian and maybe one day someone will mistake me for a NZ North Islander!

Haha, a well-kept secret!  But we should have guessed: nothing like "recent" converts to praise high and loud their local identity (even down to its snow, started yesterday in Montreal, the icy version).  And dual citizenship may be the most frequent case with our colleagues here.  What can we say?  They stay for the warmth 🙂 .

Great post! It's cool that Canada / U.S. allow this. I've been in Germany for almost 10 years now and totally identify wth your reasoning to take on another passport  (voting + liking the country). US/Germany don't allow it though ... I'd have to give up the U.S. passport which isn't something that I'm willing to do just yet. Who knows why the next 10 years will bring though ...

Good to know about you and your dual citizenship secret !! 😛