As described in the requirements in the first part of this tutorial the attributes in the example application should be checked according to the following rules:

The basic approach to check the attributes in BRFplus will be the following (thanks to Christian Lechner for helping me out with the initial design):

Especially allowing an optional “Attribute 2” while trying to check the value ranges in the decision table required some special handling. There are two reasons for this. First, it is necessary to convert the string values of the attributes into number. Second, optional attributes are not easy to handle in a decision table. I’ll discuss both topics in more detail in the subsequent sections.

Implementing the validity checks described above in a BRFplus application require to some changes to the implementation approach an experienced ABAP developer would take. The reasons for these are twofold. First, BRFplus has some special properties, like e.g. the handling of data objects, that are counter-intuitive for an ABAP developer. Second, an even more important, is the need to think in rules and expressions instead of objects, attributes and methods. This was, at least for me, the biggest difference.

In the following sections I’ll describe the necessary steps in BRFplus as well as the underlying rational to the approach as detailed as possible. This way I hove to simplify the first steps in BRFplus for developers by helping them to avoid common mistakes and trap doors. 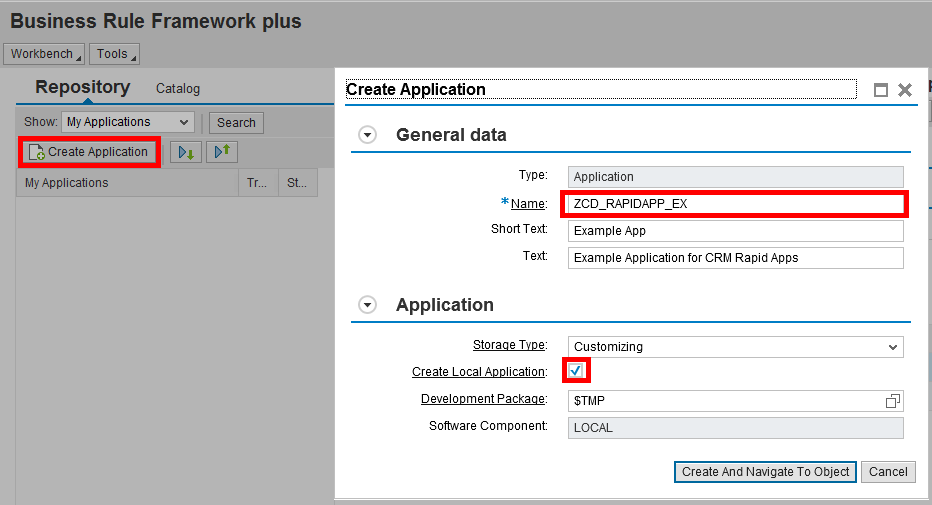 With the application in place the next step is to create the required BRFplus data objects. BRFplus offers two options for creating data objects like elements, structures and tables. Either these data objects can be created in BRFplus using build in data types or they can be created on the basis of existing DDIC object. As mentioned before BRFplus handles data objects differently then an ABAP developer would expect. In particular it is not possible to reuse a data object across functions. As a ABAP developer one would naturally try to reuse a data structure like ATTRIBUTE_1_DATA e.g. as the data type of a variable and the line type of a table data object. However, this is not possible in BRFplus. Each time a data type is used in BRFplus a separate data object needs to be created for it. In order to reduce the manual modelling effort I will therefore base the data objects in BRFplus on DDIC objects.

Most of the required DDIC objects where already created in the first part of this blog. The only additional DDIC object necessary is the structure ZCD_BRF_RAPID_APP_RESULT_S that I will use as the data type for the result of the BRFplus function. The following table shows the details of this structure:

With the necessary DDIC objects in place it is now possible to create the required data objects. The first data object that I created is the table object ATTRIBUTE_TABLE. Data objects are created by  right clicking on the application in the repository explorer and selecting “Create -> Data Object -> Table”. 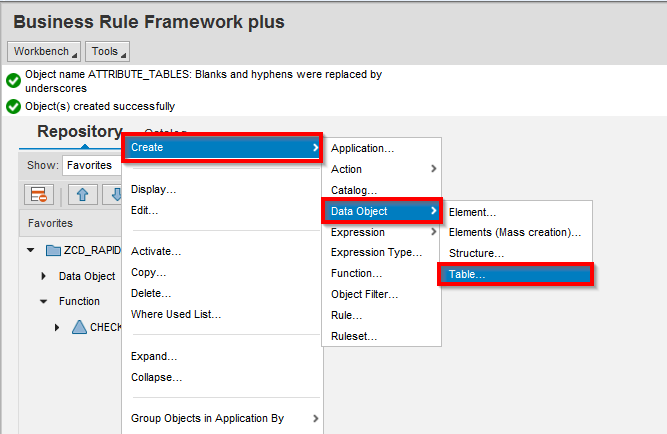 In the following dialogue I set the name and description for the table data object. Furthermore, I set the binding type to “DDIC Table” and selected the DDIC type ZCD_RAE_ATTRIBS_ATTR_T. This table type was automatically created during the modelling of the Rapid Application in part one of the tutorial. 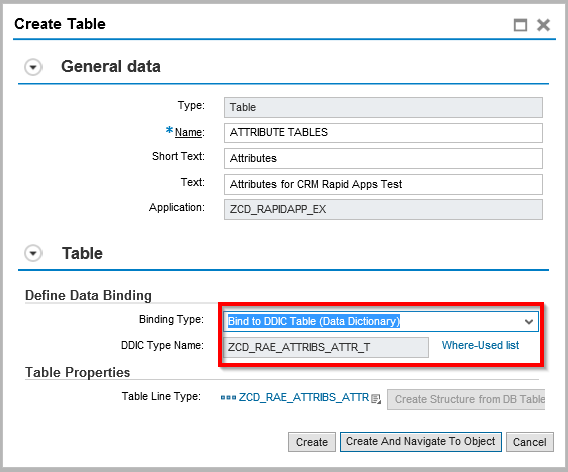 After clicking on create a number of data objects are automatically created. Besides the table data object ATTRIBUTE_TABLE the structure ZCD_RAE_ATTRIBS_ATTR and the two data elements ZZ_ATTRUTE and ZZ_VALUE are created. The following screen shot shows the created data object: 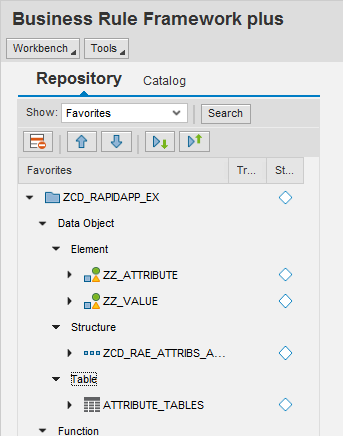 Creating the Function and the Rule Set

With the data objects in place the next step is to create the CHECK_ATTRIBUTE_VALIDITY function and the rule set implementing this function. A function is created by right clicking the BRFplus application and selecting “Create -> Function”. Once the function is create make sure it is set to “Event Mode” (cf. the following screen shot). 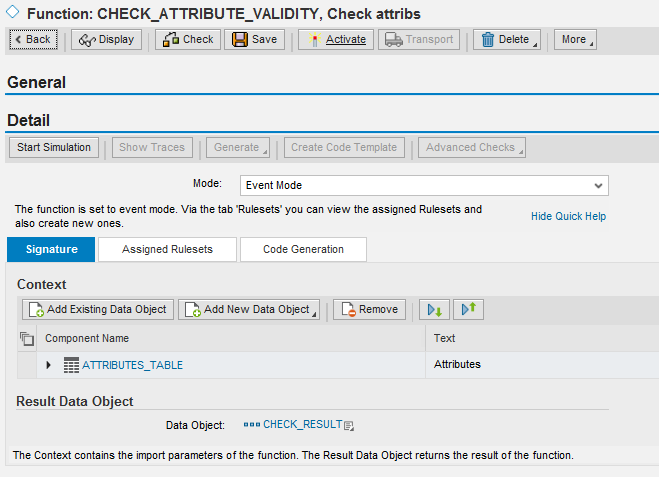 After creating the function the next step is to create the CHECK_ATTRIBUTE_VALIDITY_RS rule set implementing the function. Again, a function can have multi rule sets assigned but for the example application only one rule set is needed. Rule sets can be created by selection the tab “Assigned Rulesets” and clicking on “Create Ruleset”. Once the rule set is created I added the two data objects ATTRIBUTE_1_DATA and ATTRIBUTE_1_DATA as variable to the rule set. 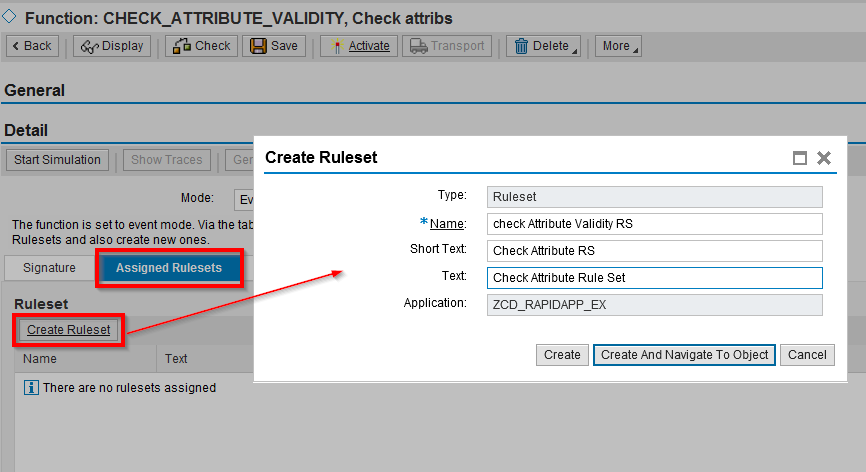 The following screen shots show the implementation of the two table expressions IS_ATTRIB_1_VALID and GET_ATTRIB1_VALUE. IS_ATTRIB_1_VALID uses the operation “Has exactly”. Using this operation it checks if the attribute table contains exactly one row where the value of ZZ_ATTRIBUTE is equal to Attrib1. Note that BRFplus automatically provides the possible values for the data object in the value help. I modelled the possible values using the Rapid Application Tool in the first part of the tutorial.

The GET_ATTRIB1_VALUE function uses the operation “First line” to select the first row where the value of ZZ_ATTRIBUTE is equal to Attrib1.

The other table expressions are implemented accordingly.

Next, on the simulation screen simply accept the default values. 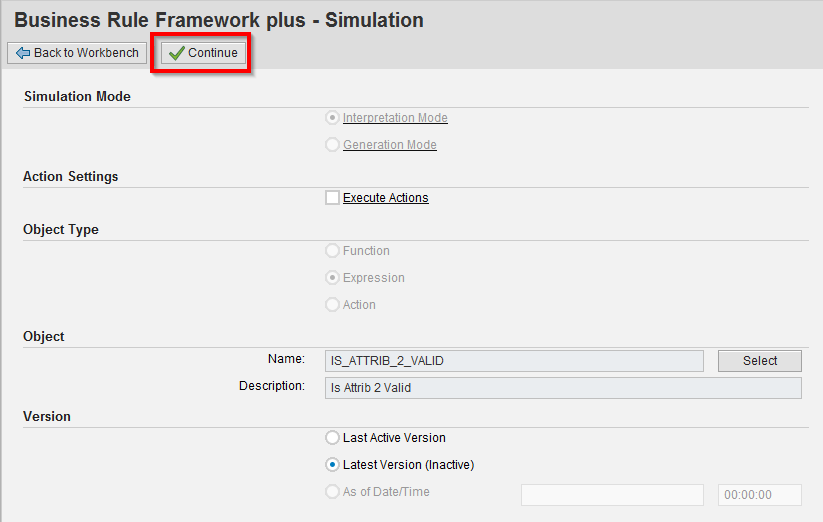 In the following screen it is now possible to provide input data for the simulation. As one would expect it is also possible to store the entered data as test variants or to upload test data from an excel. In my simple example I simply entered the test data manually. By clicking on “Execute and Display Processing Steps” the function is executed and the result as well as the executed processing steps are displayed. Especially when developing complex expressions or functions the simulation is helpful to test the development and analyse errors. 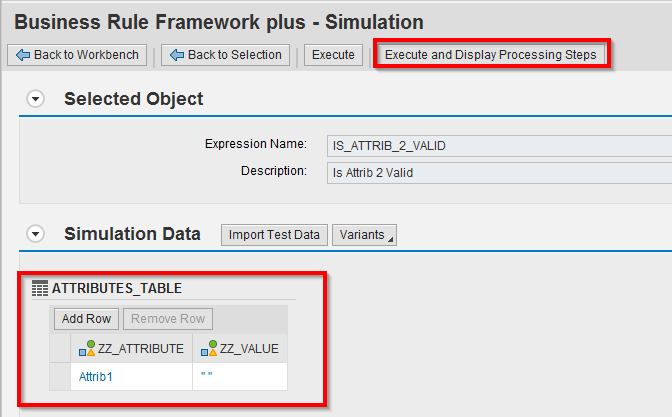 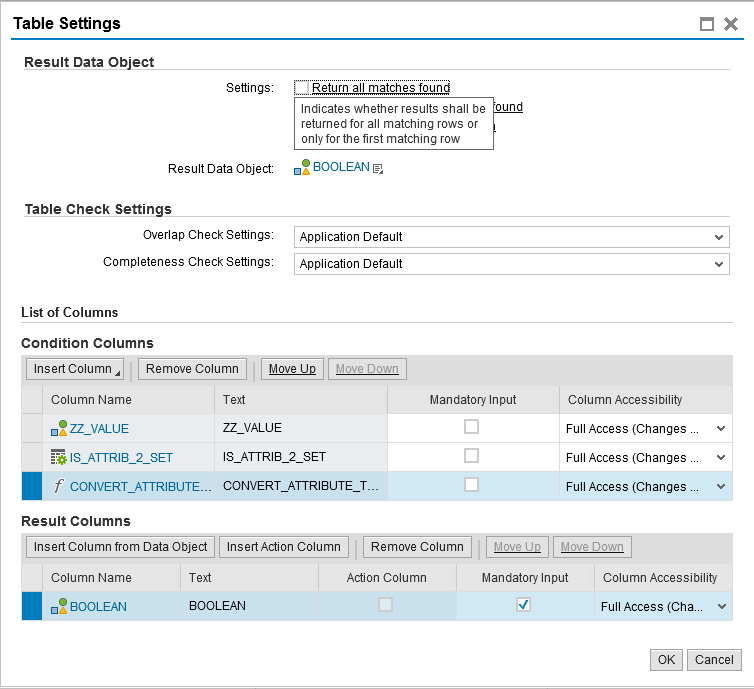 Using this set up I modelled the following rules in the decision table, which basically checks the third requirement of the application design.

The following screen shot shows the implementation of this decision table in the BRFplus workbench.

Creating the Rules in the Rule Set

Finally, all the necessary building block to implement the rule set are in place. Using the rule set the following logic (mention already in the application design) will be implemented:

The following screen shot shows the implementation of the first step in the logic implement in the rule set. The first rule uses the IS_ATTRIB_1_VALID table expression to check if the Attribute 1 is present. If this is the case the CHECK_RESULT-ARE_ATTRIBS_VALID is set to true and the variable ATTRIBUTE_1_DATA to the result of the GET_ATTRIB1_VALUE table expression. The second rule is an exit condition that checks if CHECK_RESULT-ARE_ATTRIBS_VALID is false. If this is the case the error message of the CHECK_RESULT is set to some message class value and the rule execution is terminated. 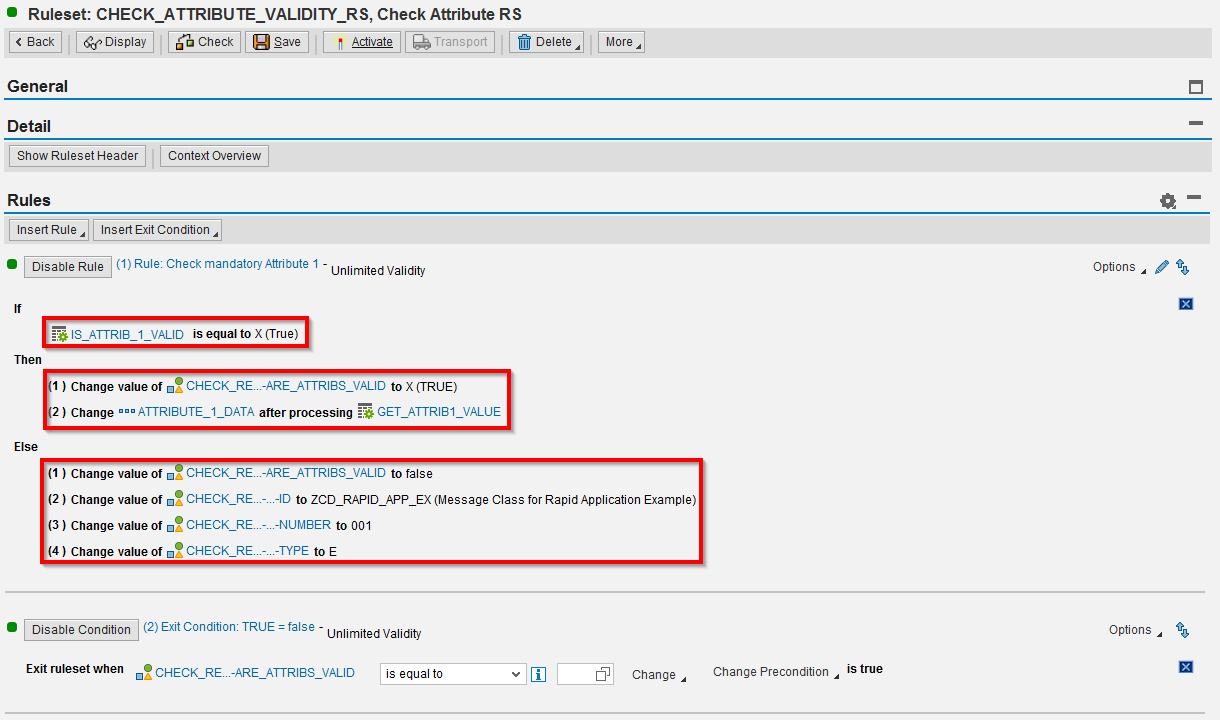 The following screen shot show the implementation of the second and third step of the logic. Rules three and four are similar to the rules one and two. This time only Attribute 2 is checked instead of Attribute 1. The fifth rule finally uses the decision table CHECK_ATTRIBUTE_VALUES to check the validity of the attribute values. 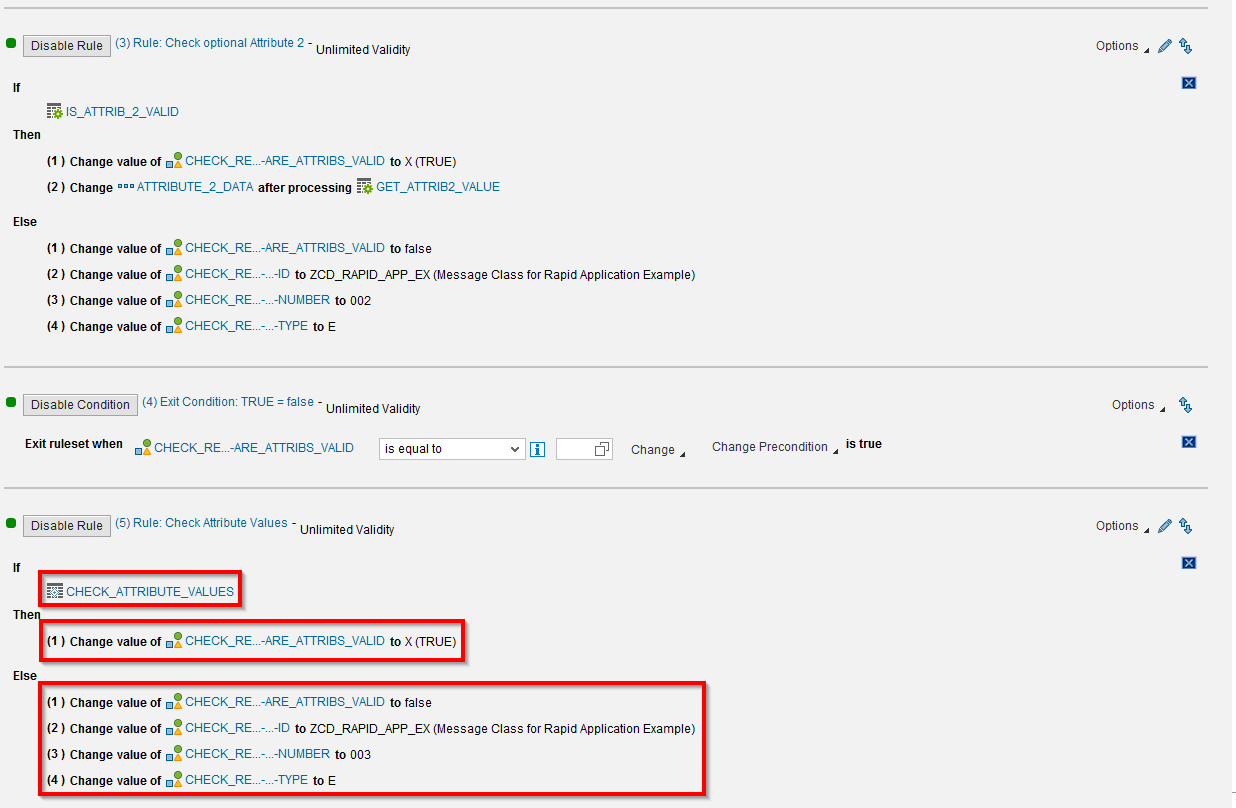 Integrating BRFplus in the Rapid Application 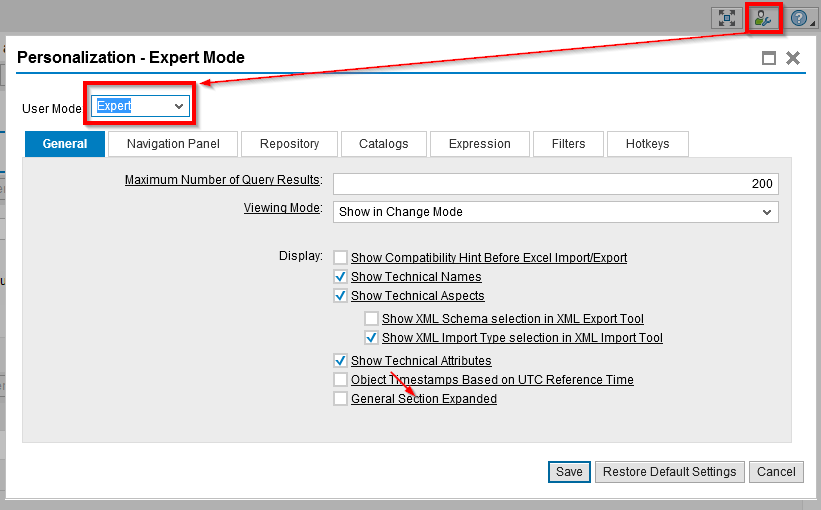 Once the expert mode is set the “Create Code Template” button becomes visible in the BRFplus function. The code generated using the button contains nice comments as documentation. Consequently, the generated code is basically self-explanatory. The following code snippet contains the method EXECUTE_CHECKS_USING_BRFPLUS which I omitted in the first part of the tutorial. Lines 13-35 is the code generated by BRFplus with its comments removed. Lines 37-45 is some addition error handling I added for the integration with the CRM Rapid Application framework.

Finally, the following screen shot show the complete example application with some error messages returned from the value check in BRFplus.

One thing that always puzzled me while working on this blog was the questions if performing the value checks in BRFplus is worth the effort. After all, the simple validity rules could be checked in just a few lines of ABAP code. In my opinion using the BRFplus approach is useful if either of the following hold

In the example application I could easily add a third attribute and value checks for it without touching any of the ABAP code. The change could be performed by just modelling in the Rapid Application and the BRFplus application. This is in my opinion a very important factor as it will reduce development and test effort.

As this blog was my first endeavour in the area of BRFplus I would be happy to discuss my approach in the comments section. I’m sure there are areas where my design could be improved.

In summary, this two part blog showed that the combination of CRM Rapid Applications and BRFplus is a very effective approach to develop small business applications from scratch.

Thanks a lot Christian.

Your blogs close another gap in the documentation of the many possible scenarios and use cases to apply BRFplus/DSM.