Right, it’s that time of the year again. TechEd season. To me, as a software engineer, this is better than Christmas. This year, it’s the first time I’m going there as an SAP Mentor, so it’s even more exciting and energizing. But also a lot more tiring…

I don’t want to focus on the content too much, because

A: I haven’t attended many sessions and

B: plenty of other people will cover that.

What I want to talk about, is about the atmosphere on the floor.

For me, it all started at the keynote.

Contrary to other years, the keynote was much less serious. In fact, I found that the speakers were taking themselves, and SAP, much less serious. And that’s a good thing. Even the videos were a little bit silly, even though the message they brought was still very clear.

I like that. Self-mockery is a clear sign of confidence. SAP has moved from a defensive position, into a confident state of mind, where they know that their products are good, and they can joke about it.

That same attitude continued on the show-floor. I’ve seen multiple execs doing lectures (which I never really noticed a couple of years back) and they were delivering very clear and confident messages in a very humoristic way. (even the German ones. Yes, they do have humour)

Obviously there were a couple of sessions dealing about existing technology here and there. I was actually hosting one of those. I tried to give a bit of counterweight to SAP Marketing and wanted to highlight existing technologies such as WebDynpro for ABAP, NWBC, BSP and even SAPGui. I figured that maybe 10 to 20 people would show up, but I was pretty amazed by the enormous crowd standing in front of me by the end of the session.

To me that proves that most customers are still way behind on SAP, and are actively looking for ways to leverage their current skills and to get on the journey towards SAP’s vision. We as Partners, but also SAP, should actively help those customers to understand what strategy they must follow, in order to not get left behind.

The thing is though, I’ve seen a couple of UX presentations at TechEd, and unlike 2 years ago, they actually did a really good job at explaining that

When I went to TechEd in the past, I was always a bit shy to approach the guys in the mentor shirts. I was curious to see if that was just me. To my disappointment, it’s apparently not just me being shy, because there were very little people that reached out to me on the showfloor.

In fact, the only time that people reached out to me was right after my presentation, when I was wearing a plain white shirt and a vest.

That’s something that needs work.

On the other hand, SAP executives suddenly became much more approachable when I was wearing the mentor shirts.

Maybe next year, we’ll just have to put something on the shirts like: “Talk to me, I’m lonely” 🙂

But there’s no doubt that the SAP Mentors are really jamming the community and the culture.

There were a lot of good things going on at TechEd, but it’s never perfect. One of the things that I always put on my wishlist every year, is a fully equipped Community Clubhouse. Every year there is a clubhouse, but…

I feel that the clubhouse is not even close to what it could potentially be.

Now it was basically a coffee stand and some seats -which isn’t bad to start- but I was hoping for whiteboards (and markers), hangout corners, posters, a photographer… Or even better, a real bar.

Something like an Irish pub where you can come to relax and talk to eachother. And maybe that’s the perfect place to feature topic-leaders, meet eachother in real life, feature the other communities such as StackOverflow, ExperienceSAP, SAPHANA,… and bring communities and people alike, closer together.

Another thing that struck me, and even annoyed me, was the poor acoustics. The lectures given on the show floor really suffered from all the noise out there. The expert sessions were even worse. 2 tiny speakers to make yourself heard by 50 or more people, whilst only 15 yards further, someone else was trying to do the same and make his voice heard over yours…

That wasn’t working too well. It’s an issue to be tackled next edition. How can we isolate sessions from the noise on the showfloor? 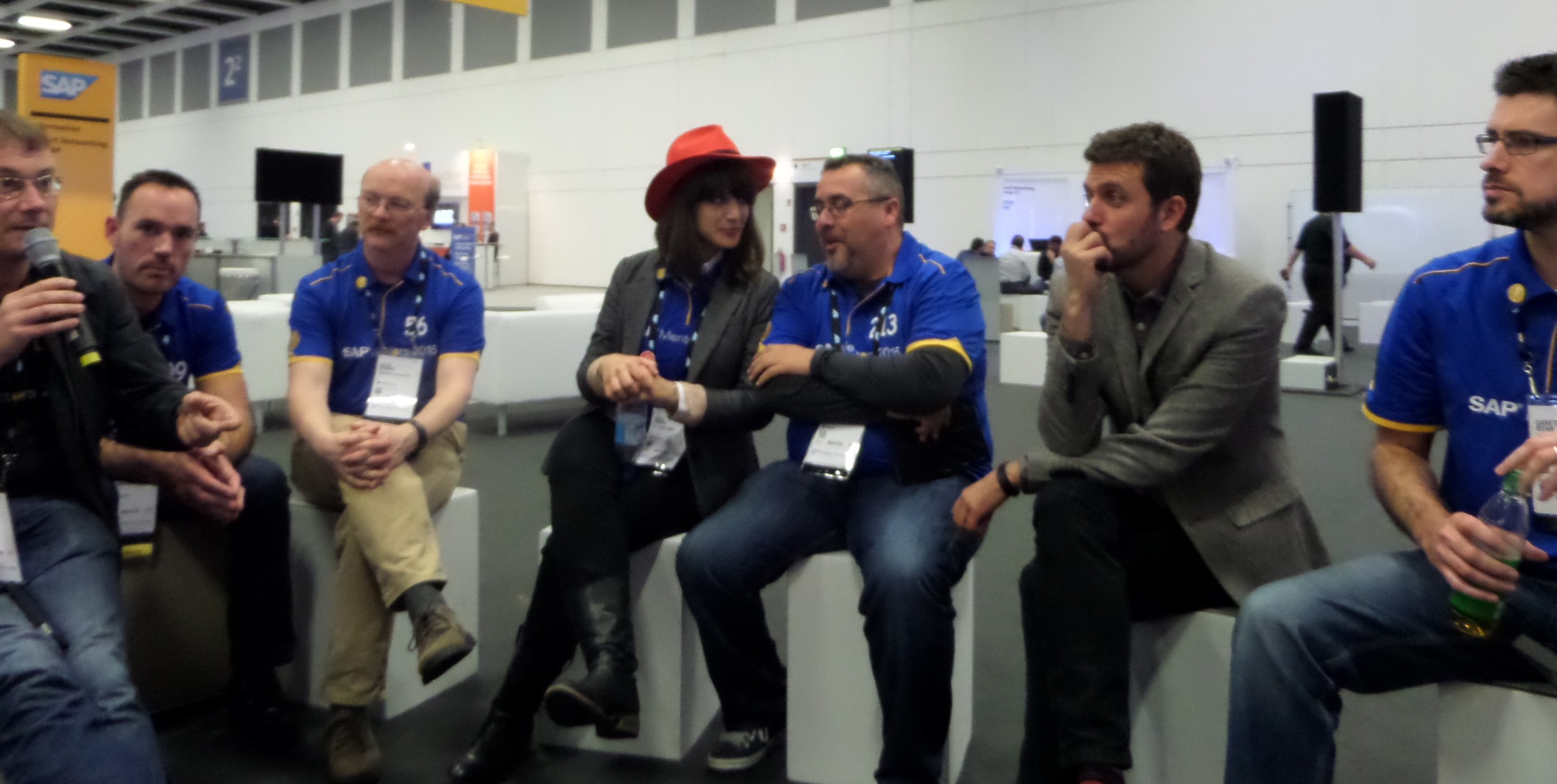 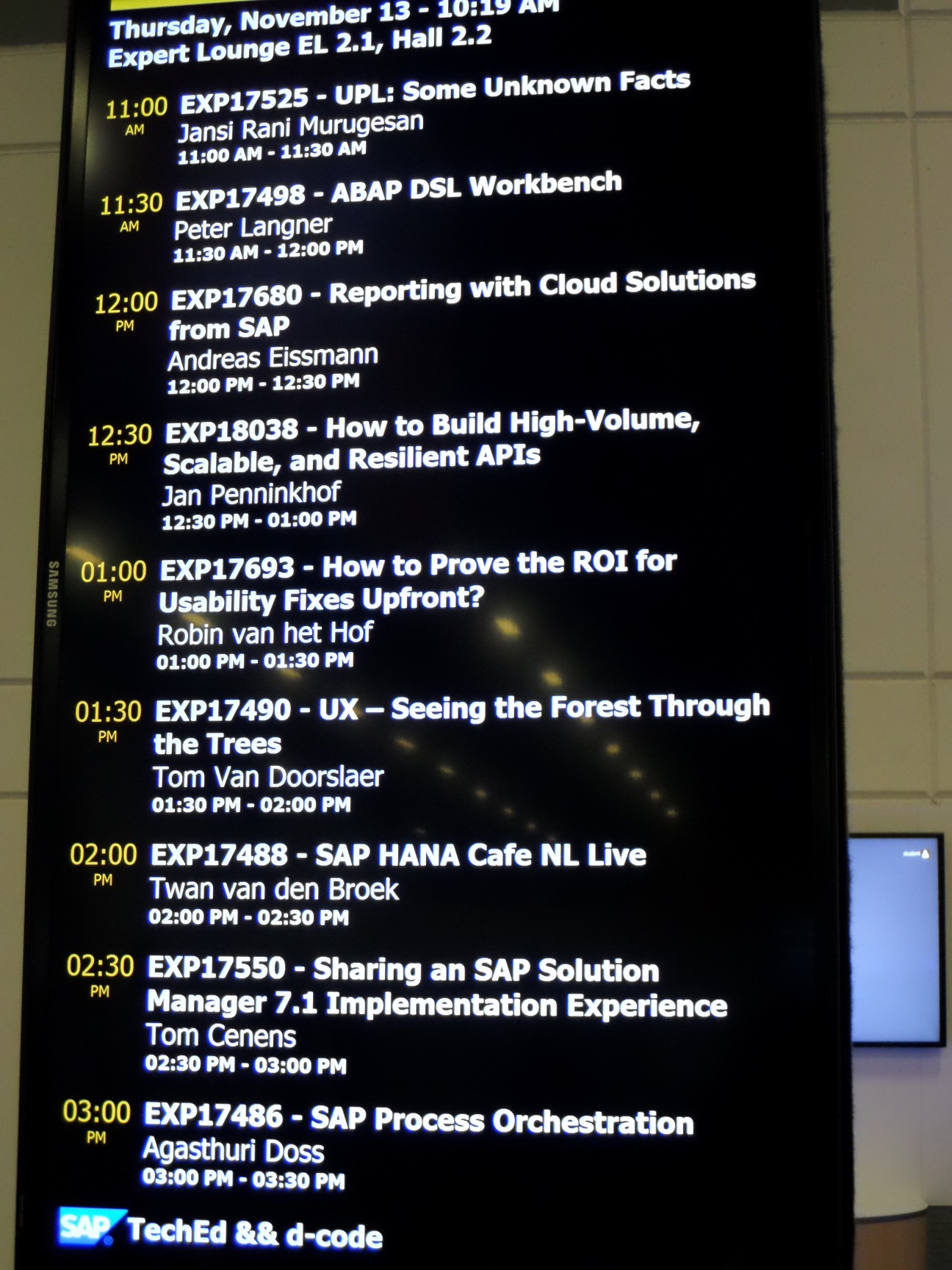 I'd say the acoustics on the show floor in Berlin were the same in Las Vegas; such a shame as there are so many great sessions going on at once.

I agree re: the Community Clubhouse; someone had to explain to me in Las Vegas the clubhouse was where the bean bags were located.

Congratulations on the crowd at your session...

Great summary of the event too.

The acoustics was a bigger problem this year than I remember from Amsterdam last year. Especially in the Expert Networking lounges, as you say. Standing at the front I thought I sounded loud enough, but apparently by the second row of the crowd I was inaudible. Ah well...

And tech in general was a problem, which is ironic for a tech conference. The provided laptops wouldn't play my screencams, but at the expert networking lounges I couldn't connect my own laptop for lack of display adaptors. I did mange to get connected in a hands-on venue, though. And of course, WiFi was largely unusable for me, at least on the show floor. I had screencams because I had no intention of trusting the WiFi. I'd love to have done live demos if I had a working network connection.

I still don't understand why WiFi is so hard...

Tech aside, TechEd Berlin was a great event. I didn't get to any sessions other than my own either - there just wasn't enough time. I didn't get to many Mentor meetings either this year - I was too busy talking to people.

I like idea of a bar in the clubhouse. I could certainly have done with a drink after my TechEd Live session 🙂

I can imagine that Denis Browne asked you some tricky questions, so a drink afterwards is certainly welcome 🙂

The WiFi doesn't have to be a problem. As a speaker you could request access to the "private" Wifi, which worked pretty well, although it was only available near speaker booths. (not on the showfloor.)

On the other hand, every speaker booth also had a network cable. The lack of HDMI connectors, was pretty embarrassing though. I understand all SAP employees have a display port on their laptop, but I don't. So I had to re-do my presentations half an hour in advance to include screenshots 😯

The idea of a (craft beer) bar in the clubhouse is hilarious, let's try to give support on this as much as we can.

One point not mentioned by you was the food. Maybe I am a bit overly critical when it comes to food but I was really disappointed of the food offerings there.

It tasted like all ingrediences where the cheapest available. Also the lack of some breakfast on day two and three was really disappointing.

But in total it was a really great experience. I liked most things like Mini Code Jams and Hackers Lounge.

jup, hacker lounge and mini-jams are definitely worth mentioning!

Food, who needs food? I was all energized from the event itself. no need for food, or sleep

oh wait, maybe that's why I needed 2 days to recover 🙂

Great blog about TechEd, I agree to all of your points.

Being a new mentor myself, I have to admit that I am still even now to shy to talk to other SAP Mentors I only know by their excellent blogs or tweets. Seeing them in person was a very impressive experience for me (quite literally as I wanted to express my deepest respect to DJ Adams...). And it was really exhausting... 🙂

WIFI: I never trust any wireless connection, being it WLAN or the mouse from my laptop. A free Internet LAN cable with Applelish connectors should not have been to hard to organize for an event of this size.

And to the acoustics: For me it was a complete failure at the show floor. With a small hearing damage I could only try to listen for a few minutes. After that, it was impossible to follow.

But overall I think this year's TechEd in Berlin was one of the better I had the chance to visit. A good keynote (if you don't look at the not so inspiring real-world examples).

And another point in your blog that I very strongly agree with: Many Customers are not yet ready to move up to where SAP is already. In Germany, I see especially the cloud thing as something that needs a lot of more explanation.