At Berlin I have taken part in a couple of Design Studio sessions and some discussions. In this blog I will mix all those experiences and describe the things I got out of all those interactions.

In the premiere session it wasn’t really discussed live and in the template demo you saw a moving graph on the left top. However I think it is a bigger thing then it was made to be. 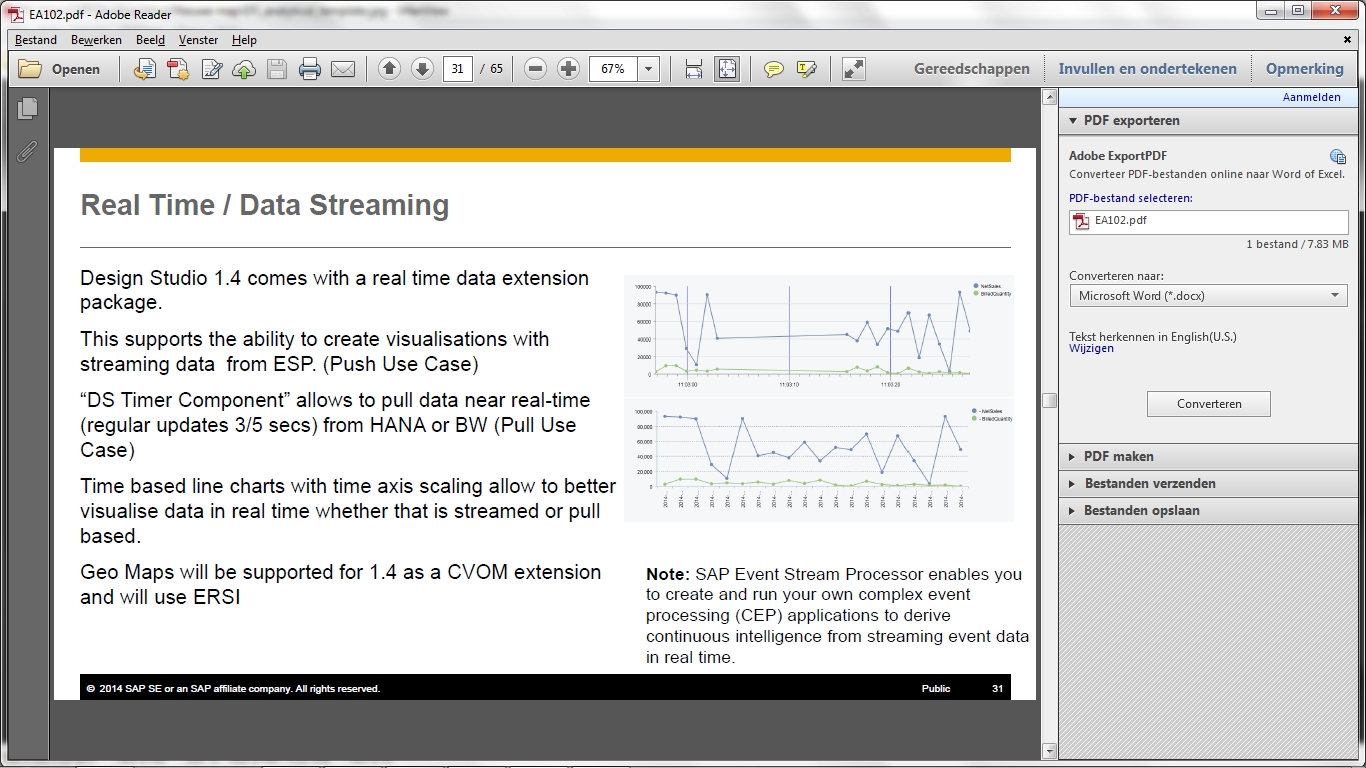 I was lucky that I also attended an expert session by Michelle Miley who showed a demo (movie due to network, but additionally she showed the application at design time afterwards). Where the live streaming updates were used for an Oil refinery. In the app you saw 4 tanks, colored red or green based on how well they were doing. Clicking on a tank resulted in a second page where you could follow live the temperature , pressure and two other measures of the tank.

The real live streaming datasources are provided by Sybase ESP, which Michelle showed us, but in the future there will be a Hana stream that will also be able to deliver a stream of updates.

Additional to this you have off course already the usage of the time update (look at the samples of SDK in http://help.sap.com/boad). Set this thing to 5 seconds and you’re pretty close. (but make sure the update takes less than 5 seconds!). Nevertheless I think live streaming is a pretty big thing as an addition. I know I want to make at least some example apps to showcase this. 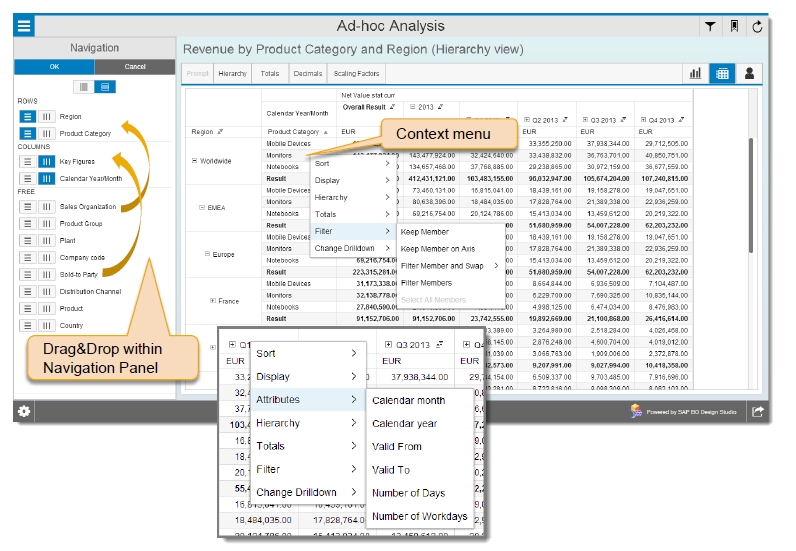 On the right top you see a filter button where you can manually enter a keyword. Based on the keyword you get a selection of queries where the keyword is part of the description and you have authorization to. On the left you can use the navigational panel to drag fields within the panel to rows or columns. An additional filter button within the query shows a checkbox group with all the dimensions. Selecting dimensions will result in listboxes with values for those dimensions which enables you to filter the query by selecting a value.

I think this can be even further enhanced to make a panel that groups queries into segments. For example queries on sale, purchasing, HR, production etc. based on authorization I think this is already doable in 1.4.

This template is a great starting point for IT to create a company template to enable users to navigate through a number of queries. Additionally you have control over the queries and options that the user can see.

In my opinion there is now a start on the way to Fiori integration. SAP fiori applications are known for their live tiles and ability to click through to applications. 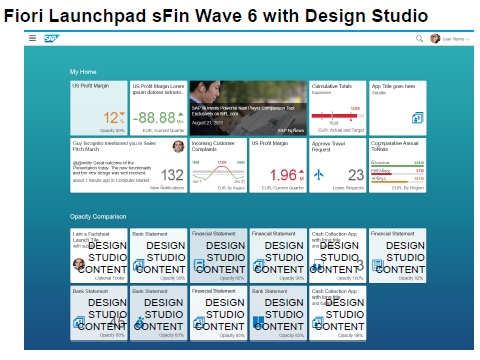 You can now do the following :

What is still to come :

So be aware of the current limitations, but the future is that you can fully integrate Design Studio into Fiori.

Global Scripting Functions
Currently the best way to avoid double coding is to use invisible buttons (until 1.3)  Now there will be a new technical component of the type “Global Script Holder” 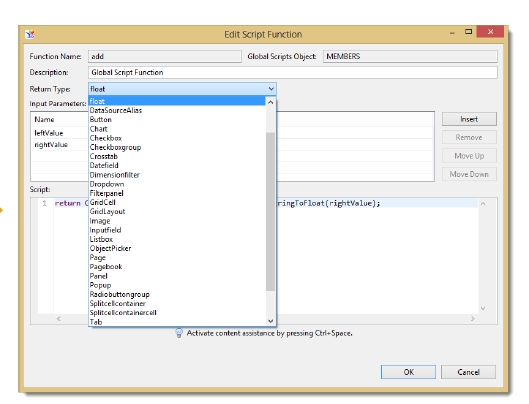 You can create a number of these components and add Function names to a component. In the example you see that there is a global component “MEMBERS” with the function name “ADD”. My guess is that in script you can address this by using “MEMBERS.ADD” but I haven’t tried this yet so don’t trust me and check for yourself 😉

Now that I zoomed in to create the screenshot I noticed the amount of return types. This intrigues me a lot. In JavaScript this would mean that I can return any object from coding in the function. That seems to be a very big step in the code. So I am curious to what this exactly means (or that this was the reason to keep the image relatively small). 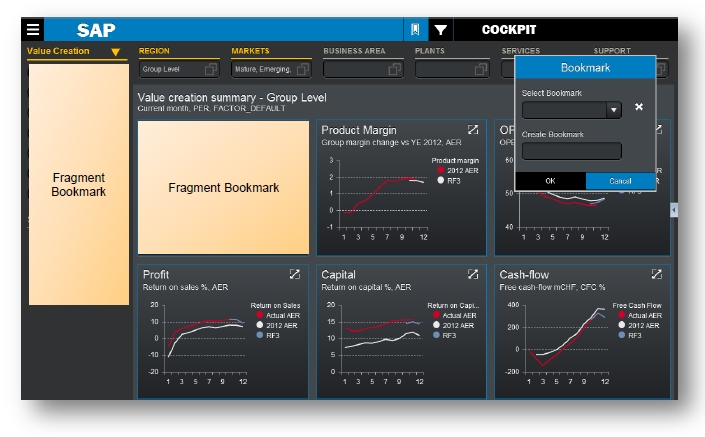 It will now possible to create Report to Report interfaces using a technical component of the type “Context Menu”. You can call other queries , transactions, reports and Applications from different source systems from this component. Although it is not specifically mentioned I guess that you have to tie the component to a crosstab component. My guess is based on the line that parameterization is based on the cells you jump from, in my eyes that means, tied to Crosstab.

Although transactions are mentioned here, that may not mean all transactions. In the roadmap for 1.5 it says call RFC modules from DS script. RFC modules are used for calling R/3 transactions. So I wonder if this is already possible from this component but not for script or that this also does limit the RRI component. In the screenshot you see that the query monitor in SAP BW is a jump target. That would indicate that RFC is possible.

In the SDK extension you now have the ability to create datasources. This is actually a big thing. It enables CSV, EXCEL, Odata or any datasource to be a datasource that is able to tie up with standard components. 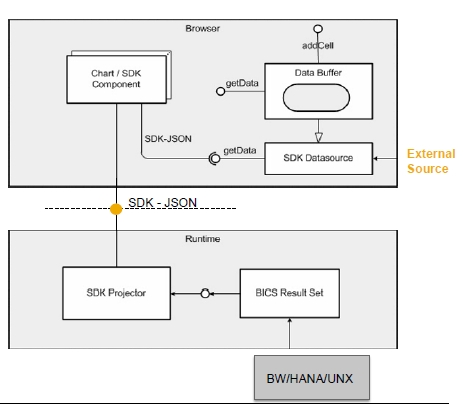 I have to admit that the image doesn’t result in me having a complete understanding of the datasource SDK, however I think that you now can create an component that inherits all the properties/methods of a standard datasource and that you internally need to build the SDK-JSON according to the standard specification. It can also be that in the samples of 1.4 you will find a template Datasource SDK that you copy and create internal functions that supply the data.

A part that holds some promise is the Data Buffer option. This will allow you to add a cell instead of replacing the current recordset. I imagine that combined with the timer function you can poll the current state at short interfalls (you’re only collecting one number) but with addcell you will be building a history that can be shown in a component.

Lots more script enhancements not mentioned
From people who tried 1.4 I heard that there are a lot of more scripting additions then mentioned in the presentations. These are things I have to try out for myself. I asked Eric Schemer if he could elaborate on the new scripting api, but he couldn’t really give me an answer on that. When you try 1.4 be sure to scan the what’s new manual and the actual manual for things that are new.

Further down the Roadmap

Off course does the development not stop. In the sessions the roadmap was also mentioned and explained. 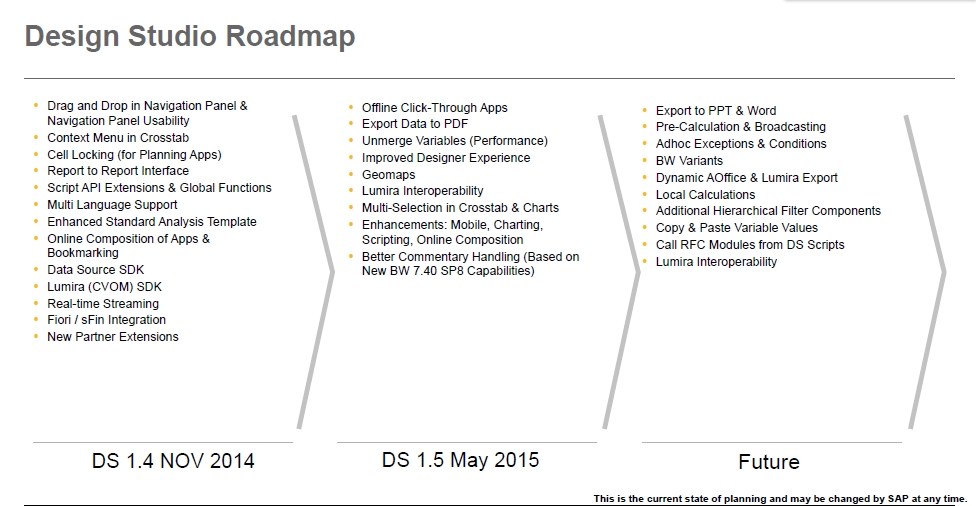 Some points that were discussed :

This is only the state of what it was on the 13th November 2014. Be sure to go to the newest version of the roadmap if you want to know the state of a particular development.

A lot of changes have been made for 1.4. I still have to work with the new version to really have an opinion but I already can say that I am the most excited about the realtime capabilities and the ability to create datasources based on CSV, excel or manual input.

On the other hand I was missing a number of updates regarding the responsiveness and layout of applications.

But most importantly Now we have to wait impatiently until November 30th until the GAT of 1.4.