For me the keynote had two major messages: SAP HANA Cloud Platform is really impressive and enabler for product innovation for SAP and customers. The announcement of Bernd Leukert of SAP about s-innovations was another highlight of the keynote. In this blog entry I will muse about possible key technologies for innovation strategy of SAP but I will also scetch my impressions about the event in Berlin.

I was Born in Berlin and I remember the wall very well. So I used the chance to travel to Berlin the weekend before and took part of at the events and projects refer to the anniversary of ‘25 year Fall of the Wall’ especially the ‘Lichtgrenze’:

I really enjoyed the event since the fall of the wall especially when the ballons of the “Lichtgrenze” went up to the sky and the wall vanished. There was as well a strong political signal since the European Anthem was played instead of the German national Anthem.

The Atmosphere at SAP TechEd&&d-code

This SAP TechED&&d-code was different compared to previous events: SAP sent out many developers to Berlin and so the most interesting discussion had been at various information points, the hacker and code review area as well as the expert networking lounge to mention just a few. So I could address my questions directly and discuss with people who actually built those frameworks and libraries I was interested in. This was really a great experience and I think the people at SAP learned a lot from it.

IMHO it was a good choice to have celebration night instead of a concert because there was room for networking and talks with peers.

Run with the Community

Networking and meeting peers is another reason to take part at the event. SCN is one important part of the Ecosystem and its members are helping others by providing information, development and implement support in times, where evolution of SAP technology is so fast that many books about SAP technology are outdated when they come out of print. And yes, I’m also a proud member of the community and of course I took a selfie with community advocate Moshe Naveh. 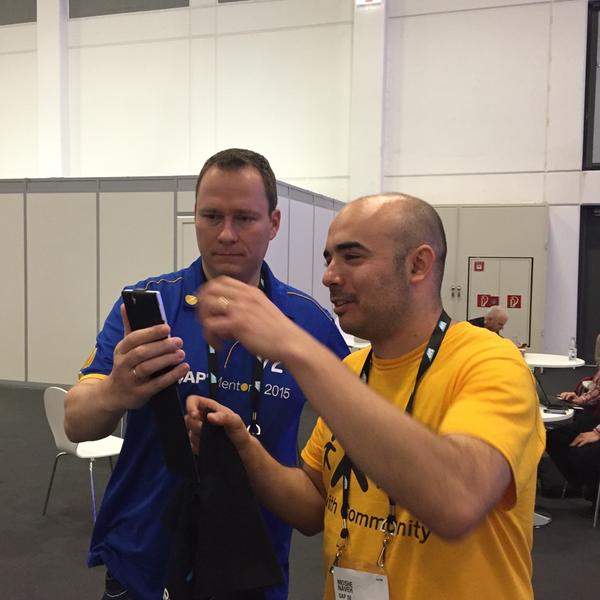 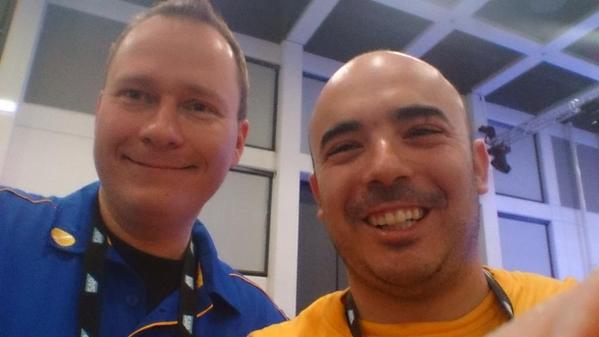 It was fun to meet many active members of SCN like Lukas Weigelt and Florian Henninger. Florian encouraged me to write more blogs and to focus on one single topic like business rules management. I agree with him and so I will also blog about topics like output and document management in new HTML5 based UIs.

SAP introduced in many areas REST-based architecture models (UI5 uses OData in most cases) and up to my knowledge this is considered as state-of-the-art for web based applications and has been successfully applied in many cases even as enterprise architecture and is main driver of innovation if think that all APIs are RESTful (think of Google, Amazon and so on). For SAP this approach solves the following problems:

And this is why I think SAP will continue to invest in SAP UI5. And this is consistent with the announcements of the future of UI5: SAP is working on “heavy transactions”, optimistic and pessimistic locking and so on. So I expect that UI5 will be as mature as FPM (as long as you use OData). But I will come to that topic later.

I blogged  about Simple Finance before – it is the frontrunner of a suite of HANA-optimized solutions on top of SAP Business Suite (for HANA): http://scn.sap.com/community/business-suite/blog/2014/08/03/sap-smart-financials-evolution-to-hana-optimized-solutions-and-follow-up-questions It was already announced that more of such solutions will come. Personally I have many follow-up questions:

I hope SAP will clarify this but I would like to muse about those questions. There must be a transition path from Business Suite on HANA to s-innovations so s-innovations can’t be completely different. If you look at Simple Finance you might get an idea how SAP can ensure this by using CDS as silver bullet like I explained in my blog.

But s-innovations must evolve and the UI will be part of it. In my opinion UI5 should play a major role as well: it is consistent to SAP’s UI strategy the Cloud strategy and will enable to build new processes and new UIs.  But is SAP technologically ready for this? I think so because in the last time SAP invested in many technologies at the application layer that are UI agnostic resp. allow pushing business objects and views to OData and so to USAP I5: BOPF, SADL and CDS.

In my opinion SAP has to ensure the transition path from Business Suite (on HANA) and s-innovations so it would be wise also to port these new technologies back to SAP Business Suite.

But please be aware that these are speculations. – perhaps the RESTful APIs will be enabler for completely new integration scenarios, just think about above mentioned Google and amazon APIs. Perhaps this will lead to a kind of new “enterprise mashups”.  So with the speed of innovation of SAP technology in the Cloud it is hard to predict what will be there in one or two years.

As you might know I am very active in the area of business rules management and so I took the chance to interview Wolfgang Schaper and  Charles Dagalla about operational decision management with predictive analytics.

I think this is a missing corner stone in SAP’s business rules management strategy. Another very important aspect is the convergence of the different rules technologies. I consider especially the code pushdown to SAP HANA as very important since it leads to completely new possibilities of code pushdown and usage of rules in Big Data scenarios. So far I consider those possibilities currently as limited as I explained in my blog: http://scn.sap.com/community/brm/blog/2014/10/10/a-first-look-at-dsm-hana-expression-dynamic-database-view

In fact at SAP TechEd&&d-code we could see mockups of a new expression type that can be compiled to HANA Rule Framework but I would have liked to experiment with it in hands-on session. IMHO SAP should definitely spend more resources on it since it is an impressive technology with many use cases – think of deployment of business logic into the cloud for example.

In that last three days I spent the focus on UI technology. SAP presented many possibilities to improve the UI: existing UIs can be improved using SAP Screen Personas. For complex use cases (UIs for power users  f.e.) FPM is still the best choice especially in connection with NWBC (for integration purposes) and we will use techniques in the future too. But UI5 is getting more and more momentum and I expect it to become the leading UI technology in the future in the SAP world. This correlates with the fact that the “m” in sap.m libraries in UI5 stands for “main” instead of “mobile” as in the past.

Nearly of my concrete technical questions (UI5, Fiori Launchpad…) could be answered be since SAP sent out many developers and I liked the discussions with them more than the lectures.

So let me come to the conclusion: SAP presented cool technologies and as well a vision for next-generation applications. I worked with UI5 and from my experience it’s a stable and mature and fast evolving technology – but this topic for another blog.

There are many follow-up questions (especially to s-innovations) and I can’t wait for the answers. And it seems to me also clear that SAP is using synergies between their key technologies. And in the cloud all technologies will evolve very fast.

For me SAP TechEd&&d-code was definitely worth attending and in fact the most important event this year.

nice chapter on s-innovations asking the right questions, esp with regards to partners' involvement. i think it's up to customers how it will evolve, though. depending on market demand SAP will probably adjust the road map to satisfy their requirements.

It's been a pleasure meeting you in person, Tobias! I'm positive that even the company I work for in the dusty public sector will be able to benefit from some of the new UI technologies, i.e. using the look and feel of the Fiori-Launchpad once we use browsers that support HTML5 (urgh) and, more importantly, SAP Screen Personas 3.0. After all who in their right mind would not be tempted trying out Personas after witnessing Steve Rumsby 's example of turning a transaction with a billion tabs / navigation screens / scrollbars into one single overview page? 😉

It was to pleasure to meet you, too.

It was great meeting you in person:)

Great wrap up. TechEd && d-code was the event of the year for me too.

I had the chance to arrive to Berlin just before the "Lichtgrenze" balloons were released. I have been to Berlin before and like the city very much, and also remember very well the news about the Fall of the Wall 25 years ago, so being there on that historic day and participate in that celebration at least for few hours was very touching for me. I could feel the emotion on people's faces. I have no words to describe it.

Well, in the past I had mixed Feelings about Berlin but now I start to like it again. You are absolutely right - the Lichtgrenze was an amazing event. I also visited many other installations and learned a lot about the the history of the wall. Let me give you an example: there have been "ghost stations" of west Berlin undergound trains and as a child I was really scared at those empty and dark stations. There had been brigs with armed soldiers who controlled the stations and I could see their angry faces. Now I learned that those soldiers have been mistrusted by eastern government as well and they were locked in the whole day in the brig. This was new for me I'm sure that I would have an angry face myself if I would have been in their situtation.