Day 2 started early. Half past 8 was already my first session. So we needed to get up early and head to the ‘Berliner Messe’ to get to our sessions in time.

A 4 hour developing workshop on HANA under the safe hands of Thomas Jung, Rich Heilman, John Astill, Nikolai Tankov and Rui Nogueira  In this session we would be going through all kinds of development artifacts in HANA. Starting with an empty eclipse environment we logged on and started with ….”hello world” off course!

Fair enough. At this point it became apparent to me that quite a few had problems with their connection and were getting quite frustrated. The staff tried to mend things as good as possible, but some couldn’t do all the things that were scheduled for the workshop.

But before we got going first some theory. 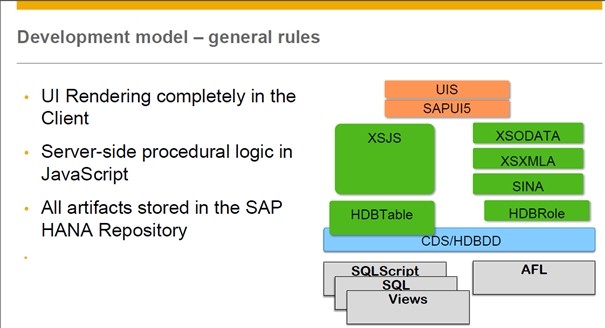 As I already did the theoretical session yesterday it was already familiar, but it a good start to get everybody going. First step was to set Chrome as the standard browser despite declarations for everlasting love for explorer. “it’s not you it’s me”.

In the workshop we handled html, xsjs, odata, tables, views, associations. Hdbdd, xslib and some other abbreviations. In the end it was a content packed morning where I had material enough to be kept busy until the last minutes of the session.

Then things got a bit slow as my next main event was only at 14:15 and I had some time to kill. Luckily I found an expert session by Christian Braukmüller discussing D3 javascript library. This is one of my favorite subjects so I stuck around. He was in the unfortunate position that he couldn’t show his slides on screen so he had to fall back to a whiteboard. But he was clearly of the type who won’t give up if things get difficult and did a big part of his presentation on a white board. Respect!

I also heard from Twan van der Broek that there were connector issues, last year they were issued by the organization, but this year you had to take them with you yourself. That left a lot of presenters caught offside. Twan had to skip his demo, but luckily he was prepared for this kind of issues and had taken screenshots so he had a backup plan for his presentation.

BW 7.4 SP8
At quarter past two it was time for BW 7.4 sp8 on HANA. by Lothar Henkes. Lothar went through all the new features that are present in SP8. In the beginning he impressed me with the structure of his presentation. He started out by highlighting the subjects he would address in the presentation and then he followed this up by showing the features. 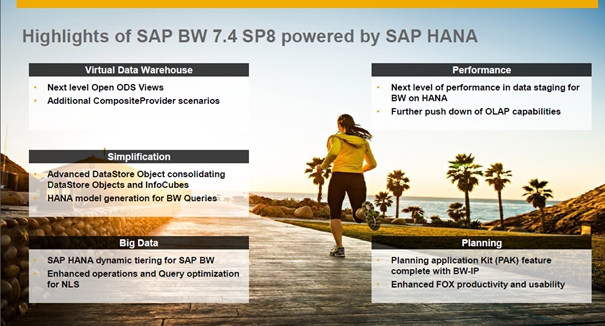 The main themes were along the lines of Simplification, Performance, BIG data and planning….. and miscellaneous off course !

In SP8 the 7.4 theme of pushing transformations down to HANA was continued, inventory key figures and handling of reference info objects. It was actually quite a long time ago that I followed a BW presentation. To really make me feel at home again they even presented SAP note numbers on the slides. For your reference: it was 2063449. This is a document where you can follow the status of pushing down code to Hana.

In terms of Big data BW talks about Hot warm and cold data. Each type of data can be modeled and stored in its own way.

As a special aside he mentioned the ability to create XXL attributes. That was actually funny. (in my eyes at least). IF I think back how long we waited until finally in SP5 the length of the attribute went from 60 to 1333 characters it is very surprising to hear that only a couple SP versions on it went another step up and now you can store PDF’s, XML, Office Files, Images, Video-Files, Audio-Files as XXL attributes into BW and very long strings such as tweets, file paths and url’s. (although tweets are not that impressive.. in opinion…. 140 characters right?)

Dataviz with Doctors without Borders

My Final session was Dataviz challenge with Doctors without Borders. I already heard the story yesterday in an expert session, and was determined that I wanted to take part in the challenge. The challenge was to make some sense out of the data that they got from people all over the world who filled in excel sheets. Doctors without Borders just was able to collect the data at some scale and asked if we could find ways to add value to the data by creating visualizations in Lumira.

We formed groups, got 2 hours’ time and presented hour solutions. It was a challenging session, especially because the data quality was low, what was to be expected seeing how the data was collected.

All teams had a way of addressing the data and came with solutions. I hope we delivered a valuable addition to Doctors without Borders. Personally I felt our group had some good ideas, but we lacked the time to execute them. Perhaps it was best to go with just one idea, but everyone felt they wanted to add something, so that is worth something too. I was certainly happy that I could contribute to this challenge.

Finally the well-deserved party. There were stunt bikers, music, food, drink .. a big party. I didn’t stay too long however. Tomorrow 08.30 will be the start of my first session!

thanks again for participating in the MSF Vizathon, & great to meet you.

You did fantastically supporting your team, and really nailed some clever workarounds to manipulate that dirty data!

Thanks for sharing, in particular the part about the #dataviz challenge for Doctors Without Borders.  That was a very enlightening event at SAPtd &&LV so I am glad that it also took place in Berlin.

Amazing what they can accomplish, isn't it?
Go MSF!
Sue

It was a pleasure having you join us for TechEd && Dcode both as a topic leader (congrats) and as an active participant in the Data Viz MSF event. As Henry Banks says : "you did fantastically supporting your team!"

You can find some great pics of activity here: