Hello everybody. I have decided to join Data Geek Challenge number 3 and it was very good reason to start using SAP Lumira. I have to say it was for first time I have used this application and even if it took couple of hours to prepare some data and graphs for this blog, I have found it very interesting to learn how to use this wonderful tool. Since I am big fan of volleyball and I am also registered player, it was very easy for me to find topic for Data Geek Challenge. Well, let’s go to my data.

I have chosen only final four teams (Brazil, Germany, France and Poland) to investigate. By the way, do you know the results of the championship? If not, even better. Then do not look on the end of this text and you can assume final results.

I would like to show some hopefully interesting facts from the volleyball game.  Keep in mind that all the data are only from final four matches, which means only four matches at all (two matches each team). But I will try to conclude some probably basic facts from these graphs and show you what can be deducted from volleyball statistics. Of course, I am not expert, so if you can see something more or anything which is not correct from my side, please, react in comments.

On the graph below you can see countries, which had qualified for the tournament. Only 24 teams must have been chosen out of 140 from all over the world. So be only even in those 24 teams is very good result. 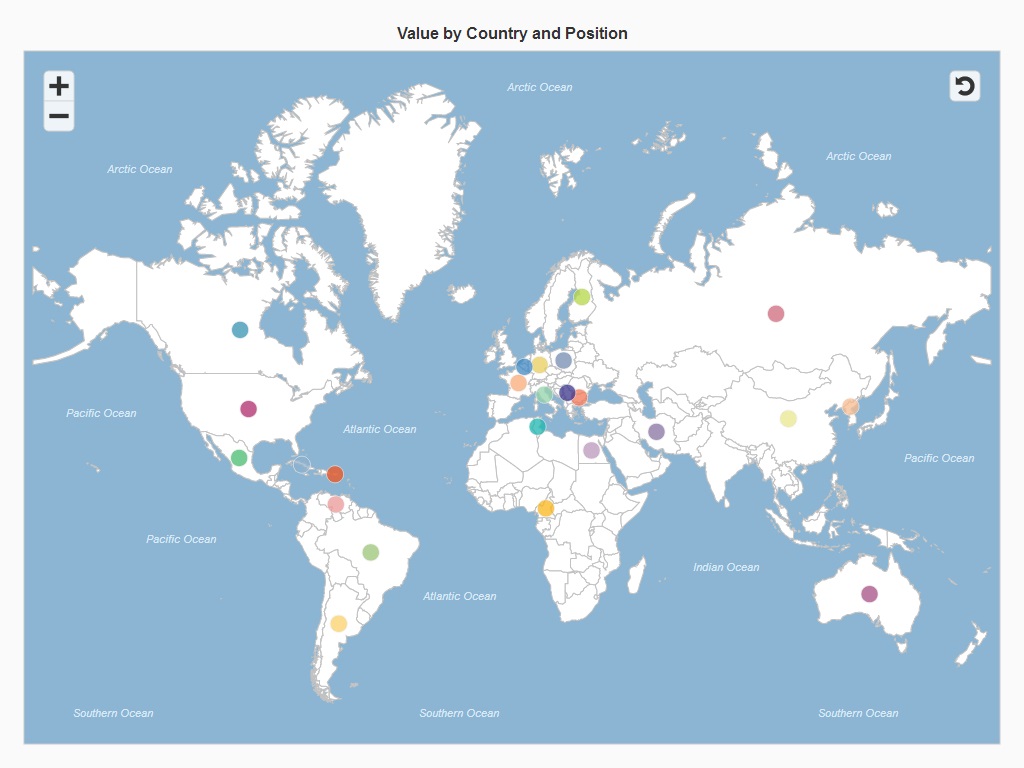 Here we have graph of players divided by a country and showing serve faults and attempts of each player.

We are mainly interested in four or five players with the most attempts, because they were playing almost all the time. According to the serve activity it seems France had the best performance. But it can be very misleading, because all players from France could have served just “easy” serve without mistakes, but leading to let other team easily attack. On the other hand, players from Poland more faults, but it probably means they also had more direct points from serves.

The fact, that Brazil and Germany has no player on the top of the graph could mean two things. They substituted more then other teams and probably no one of their team played all the time. Or they were mainly loosing, which means they had less chances to serve. 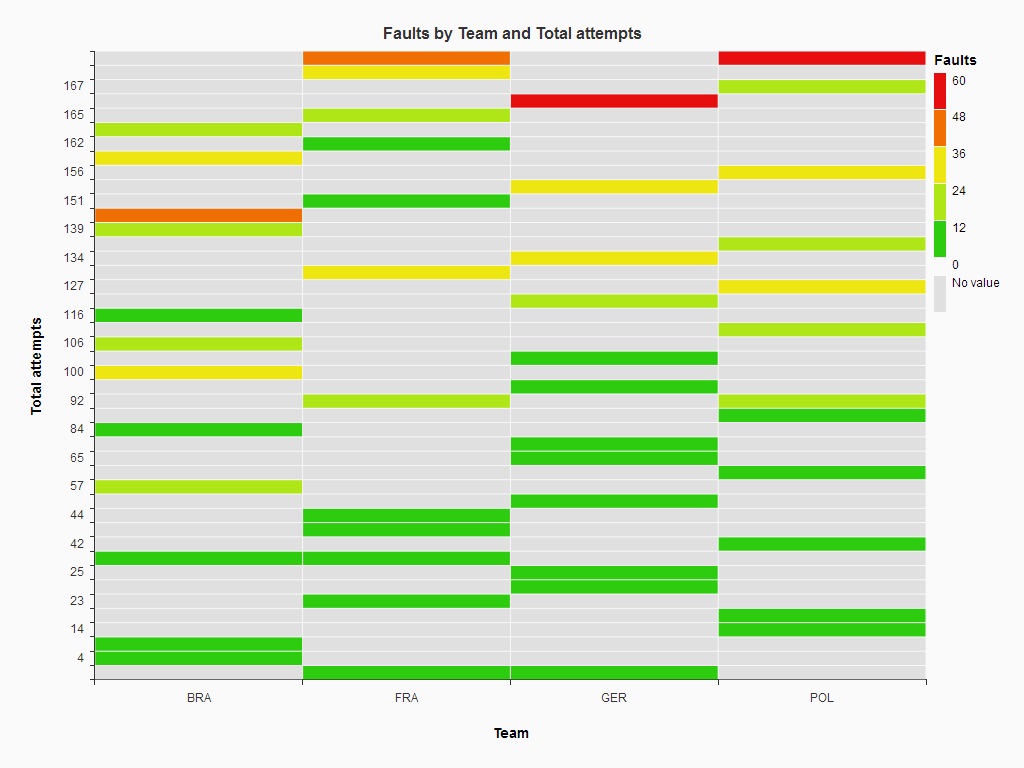 For the completeness here we have exact number for each player in a table.

Here is the similar graph for setters. You know, setter is only one for one team on court and that is the reason why not so much players are presented in the graph. And it is usual to have one main setter and if he is performing well, there is no reason to substitute him. And there are only two setters in total in whole team, so only 2 most top values of each team are relevant for us. The others are accidental passes from other players.

We can see that German and France setters had quite a lot faults in compare to the others and even though they have played almost all the time (high number of attempts). But high number of attempts can also mean, that a ball could be long time in a play and therefore setter could have more attempts. But anyway, we can assume setters from Brazil were better then others – only 2 faults together in total. 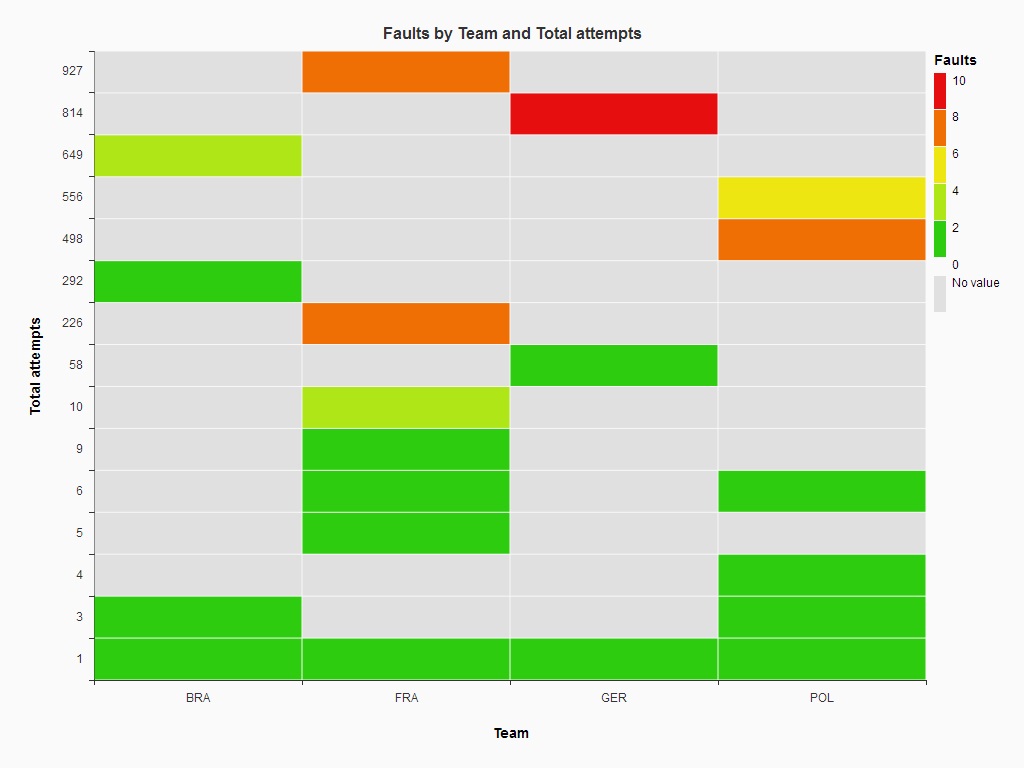 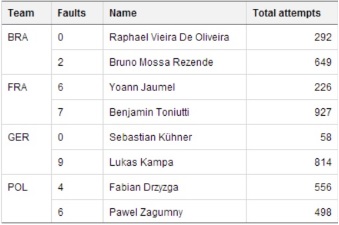 Blocks are very hard, but also very important activity. You can see blockers have quite a lot faults in compare to number of attempts. That is because point achieve from block is quite hard and also in some way also a coincidence.

Unfortunately, here we can see all teams performed very similarly. 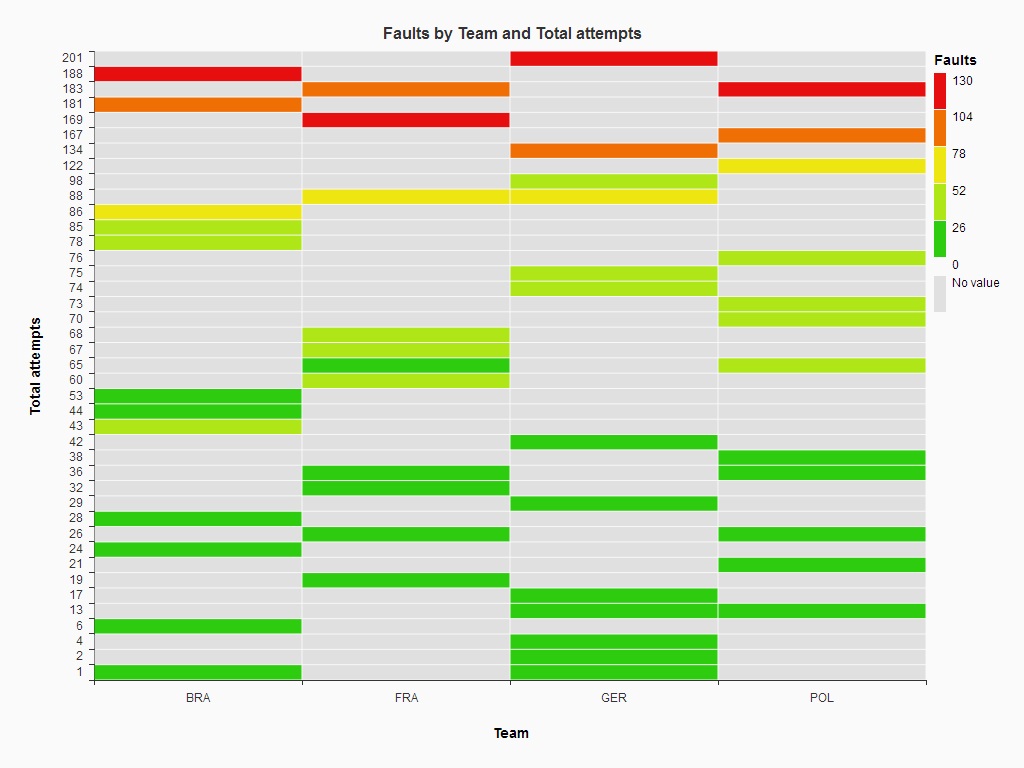 Spikes, activity which is the most impressive for the spectators. I think you all know how nice spike looks like.

Graph shows that spikers from France were not so successful. On the other hand, Brazil looks like very precise in this activity. But it also depends on how hard and striking is each spike. Easier spikes means less faults, but also no points for the team. 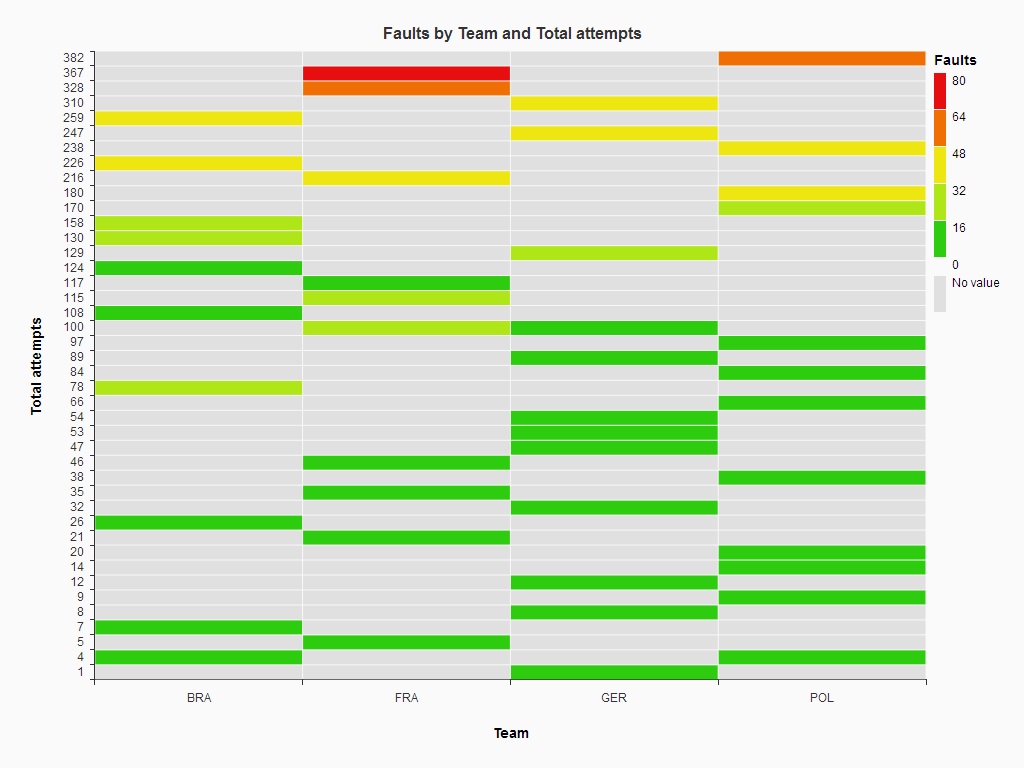 Well, from the graphs above I would assume France and Germany would not be the best one. Also I would say Poland would be in the middle. And my winner would be Brazil. But as you can see below, final standings are quite different. 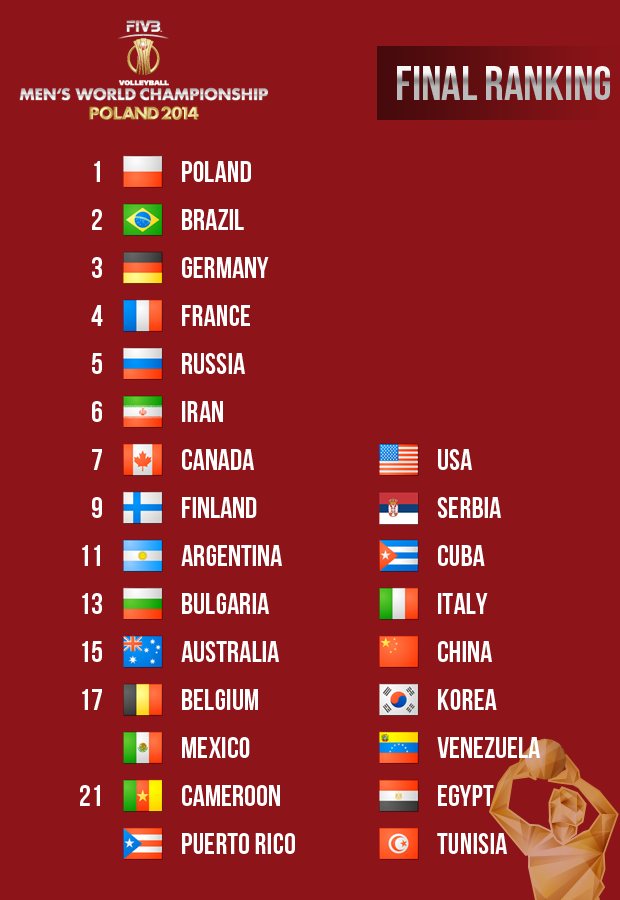 Just to show you something more, unfortunately it is not connected in any way to SAP Lumira – sorry for that.

In connection to Doctors Without Borders/Plan a Fundraiser here on SCN, check my personal blog about My personal challenge for 2015.