Ever wish your smartphone’s GPS and mapping features could paint a path on the ground for you to follow? Smartglasses may be able to do just that by projecting helpful images on top of what you see with your naked eye. And it can do more than help you find your way — it can help you get your work done.

“Holography maintains its sense of magic, but … the growing interest in what is known as augmented reality (AR) may finally change that,” The Economist noted Wednesday. “AR is an approach to take the world that consumers see and overlay information or interfaces onto it.”

This technology was on display at SAP TechEd && d-code (#SAPtd) 2014 in Las Vegas, where a new mobile app showed how a lone worker might repair a gearbox. SAP AR Service Technician offers additional information to remote workers via smartglasses, wearable computers that — you guessed it — augment reality.

It’s All in the Glasses

Users of the SAP Work Manager mobile app could check their tablet computers for a new work order, which would contain all of the information necessary to complete the task. Work Manager would also display a secure, job-specific QR code.

Scanning the QR code with smartglasses uploads all of that information into the wearable technology. From then on, the user will not need the tablet — or any paperwork — to complete the task.

“As soon as we do that, we have a rendering in 3D of the actual piece of equipment,” Pascal Lessard, product owner for SAP’s augmented reality and wearable technology portfolio, said on the show floor. “So the service technician can look at the physical piece of equipment while he sees what he needs to do, step-by-step.”

There’s also feedback via audio or text. And all of the applications are voice-activated, allowing the user to modify the existing work order — or create a new one, for example, to return and fix a worn out part.

“The most important feature is remote expert calling,” Lessard said, describing the system’s ability to let users engage in a kind of video chat with off-site authorities. “These people can see the equipment via the camera on the smartglasses, and they can direct the service technician to complete his work.”

In short, an expert anywhere in the world can be with the user virtually, without being there physically. Here’s what it might look like when fixing stadium lights.

“With SAP AR Warehouse Picker, the user’s Google Glass is authenticated on the back end via a temporary QR code,” Tim Clark noted in his blog post about the Hackers’ Lounge, adding that users receive daily tasks via their wearable devices. “The system confirms the picker’s activities, and the picker must answer ‘yes’ or ‘no’ via voice recognition before getting their next task.”

VIDEO: IoT Pumps Data into the Cloud to Save the Day, #SAPtd 2014 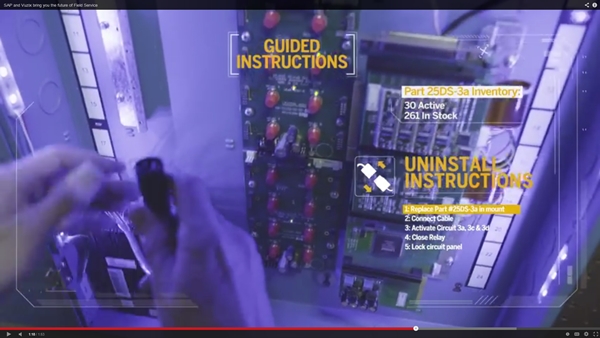