In the second semester of the academic year in South Africa, during the period of August to October 2014, SAP University Alliances (SAP UA), the SAP Innovation Centre in Pretoria and the University of Pretoria (School of Logistics) collaborated on an extended Design Thinking project with a large group of 3rd year Business students.

The project formed part of the course work for the e-Commerce Module of the B.Com. Degree. The students were divided into 11 groups and they were all posed the same challenge, i.e. “How to Design a Social Media Strategy and Campaign for a Multinational Company’s Academic Collaboration Programme in Africa” (with SAP University Alliances in Africa as industry example and by using Design thinking principles).

The project was constructed in such a way so that the students could gain maximum exposure to Design Thinking tools, techniques and processes whilst at the same time being made aware of the SAP UA programme and the potential benefits it holds for students. The Design Thinking workshops where ably facilitated by Elmarie Venter and supported by Zelda Geyer from the SAP Innovation Centre in Pretoria, South Africa. The academic oversight and guidance was provided by their the lecturer, Dr. Marcia Mkansi. De Wet Naude from SAP UA performed the role of project customer. 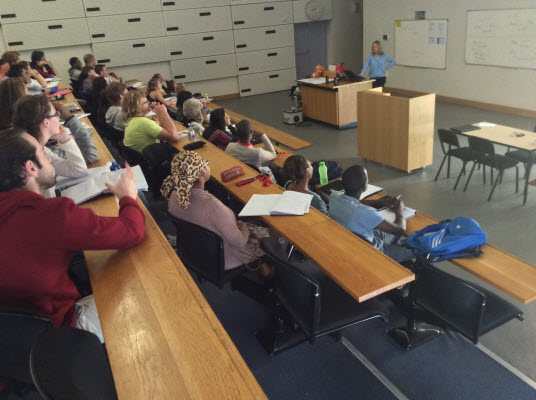 Four workshops (dealing with Scoping, Ideation, Synthesizing and Prototyping) were distributed over a 2-month period, giving students time in between sessions to explore and to do their research. Due to the large group of students and the fact that the Design Thinking sessions were run during regular lecture times, the session were held in large lecture halls at the university so that the facilitators could provide support to all teams, but at the same time giving the teams sufficient scope to focus on their specific tasks.

Teams Hard at Work on Ideation… In mid-October the students presented their projects to a panel of evaluators consisting of University of Pretoria and SAP staff members.  Since this project results contributed to the teams’ semester marks, a marking scheme was followed and all groups measured against set criteria.  Students were required not only to propose their solutions, but also to provide feedback with regard to their Design Thinking journeys.

One Team’s Journey with Design Thinking 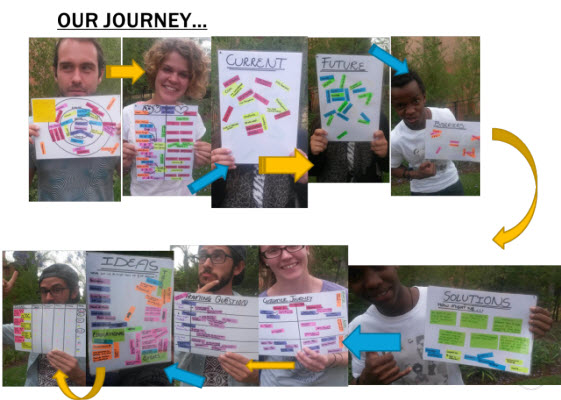 Once again the innovation capabilities and originality from the students were inspiring.  Since this project was also run as a comptition, sadly, there had to be a winner. The winning team was presented with small prizes (from both SAP and the University), handed over by Elke Simon-Keller, Head of the SAP Innovation Centre in Pretoria

De Wet, Elmarie and Elke from SAP, the winning team and their lecturer, Dr. Marcia Mkansi 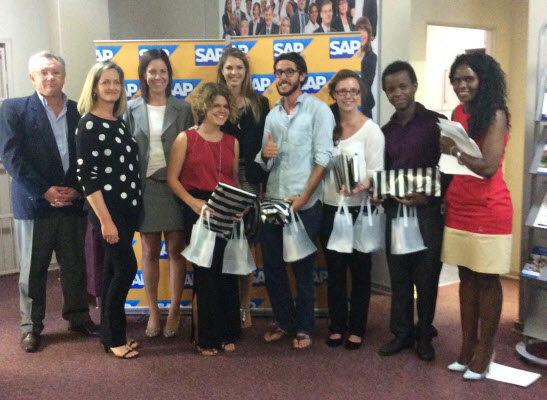 So impressed were the SAP UA team in Africa that they are now studying all the reports of the all the teams in more detail to extract relevant components from all the efforts that may make communication with students at African universities easier and more efficient and effective.

The aim of this project has always been to provide students with a real-world challenge which they had to resolve by making use of Design Thinking. The responses from students were overwhelmingly positive, with many commenting that their original scepticism towards Design Thinking as an innovation and problem-solving tool gradually disappeared over the course of the project.

A further positive outcome was that the student group gained an in-depth knowledge of SAP globally, SAP in Africa, the activities of  SAP UA and last but not least, good insight into the principles of Design Thinking.

A big “thanks” to everyone who made this project a great success – especially  Marcia, Elmarie, Zelda … and the students.