Out & Equal Workplace Summit: Driving Change from the Inside Out

This week in San Francisco, I was lucky to attend several sessions at the Out & Equal Workplace Summit 2014, which convenes annually to “share strategies and best practices to create workplace equality, inclusive of all sexual orientations, gender identities, and expressions.”

My impressions after this summit are that more than ever, workplaces are driving social change and equality from the inside-out. 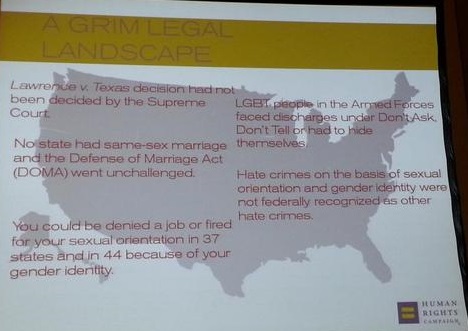 Out & Equal itself has been around for almost 20 years and has seen quite a lot of workplace changes in its time, none as sweeping as in the latter ten years. (See image to the right of the legal landscape in the US in 2002). These changes can be as complicated for businesses as they are far-reaching. As Out & Equal states, “It’s one thing for corporations to have a commitment to creating workplaces that are welcoming and supportive of gay, lesbian, bisexual, and transgender employees. But it’s another thing to develop policies and programs that can lead to equitable work environments.”

What do we mean by equitable work environments? If you are not LGBT (lesbian, gay, bisexual, or transgender) or working in corporate benefits, you may not have been aware of inequalities that have affected the workplace over the years.  Let’s take a quick look:

How exactly does this translate to transformation in the workplace? How have changes such as benefits equality and non-discrimination protections come about?  What should, and what can, the workplace do to help?

Thanks to over 3,000 attendees, many of the over 300 US corporate champions scoring 100% on the Human Rights Campaign’s Corporate Equality Index, and many other organizations present, I learned more of the answers at this week’s summit.

Leading the change are LGBT-related employee resource groups (ERGs) working together, often hand-in-hand, with corporate benefits organizations. (I’m happy to say we do this at SAP and have achieved 100% on the Human Rights Campaign’s Corporate Equality Index this way, and if you’re in the Bay Area you can attend a session in-person to find out how).  If conference sessions are an indication, ERGs have become in fact so powerful in business transformation that there’s a movement underway to re-brand them to BRGs: Business Resource Groups.

Access to healthcare alone is a good way to raise the equality conversation, since most have it either through their work or their spouse, said Gautam Raghavan, Vice President of Policy, Gill Foundation, formerly the White House liaison to the LGBT community.

It turns out that benefits drive a lot of change in corporate equality.  Companies such as Thomson Reuters use leverage like threatening to change insurance vendors if their policies are not equal – even worldwide. They are also as far as they know first multinational to offer same-gender benefits in the Philippines, and one of a limited subset of companies doing the same in India, where the high court has turned the equality landscape murky by declaring being gay illegal.

It hasn’t been easy. Thomson Reuters benefits leaders continue to wrangle with insurance brokers in order to keep policies in place for LGBT colleagues in India. Livia Konkel, Senior Diversity Lead partnering on behalf of HR with Thomson Reuters’ Pride group, says to that end it has been helpful to distinguish the relationship from “the act:” “If you’re giving a benefit to someone to cover a partner, it’s not illegal.  What is illegal is the ‘homosexual act.’ A relationship is different from an act.”

The Complicated Patchwork of Marriage 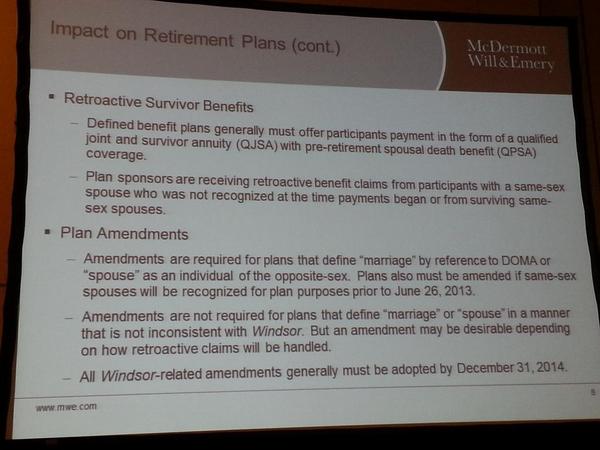 As for the complicated patchwork of marriage in the United States alone, Brian Tiemann and Todd Soloman, associates at McDermott Will & Emery, delivered a legal seminar’s worth of information in a panel called Employee Benefits … in a Post-Windsor World.  Below are just some of the mind-bending ways it costs businesses to sort through tangled marriage laws:

In Pursuit of the Perfect Score: Corporate Equality Driven by the HRC CEI

The Human Rights Campaign’s (HRC) Corporate Equality Index (CEI) has been an incredibly useful tool to help companies increase their workplace equality in pursuit of a perfect score on the CEI. Criteria continues to increase, with some the latest changes moving the needle on transgender healthcare coverage.

2016’s index will raise the bar even more, in the following areas: Some examples set by top-rated companies were provided by Deena Fidas, Director, Workplace Equality Programs at HRC. AT&T’s supplier standards, for example, go above and beyond CEI expectations, expecting suppliers to “treat all employees with respect and dignity” with call-outs not only for sexual orientation, gender identity but also for metrics like caste.

Most businesses (66%) headquartered in the US have a global footprint.  Many have a footprint in places that criminalize same-gender activity. Global codes of conduct can help greatly, said Fidas.  See the image to the right for a callout from Coca-Cola’s Global Mutual Respect Policy.

Citi’s Code of Conduct is so extensive that even visitors to the company are expected to comply with (and are protected by) non-discrimination policies.

In addition to the question of unmarried partner benefits, evolutions in workplace equality for same-gender couples also seems to be creating a tipping point in driving plan changes for straight couples. Adoption coverage, surrogacy, fertility benefits, and maternity and paternity leave are some of the trending benefits topics that can apply on both sides.

James Sumortin, Global Benefits Program Manager at Twitter, says surrogacy for opposite-gender as well as same-gender couples is a hot topic at Twitter. Now that other companies are announcing the benefit of freezing of eggs, the conversation is raised more.

As for parental leave, Twitter is one of the many companies now using the “use as you need” approach to vacation time, but you are not allowed to use this towards parental leave. This together with equal access to leave for both same-gender and opposite-gender couples may have led to an expansion in their parental leave, now at 20 weeks maternity leave and 10 weeks paternity leave.

Corporations also lead the way because corporations make technology, such as software.  Panelists mentioned the idea of a “gender audit” where we can take a look at all the touch-points where people are asked their gender, including in the hallways and, yes, in the software we create.

In the end, what matters at work matters beyond work, and vice-versa. As Deena Fidas said: “Business has a vested interest not just in 9-5 but in 5-9. Where do kids go to school? Where do spouses work?…”

I like to think Eleanor Roosevelt put it best:

“Where, after all, do universal human rights begin? In small places, close to home – so close and so small that they cannot be seen on any maps of the world. Yet they are the world of the individual person; the neighborhood he lives in; the school or college he attends; the factory, farm or office where he works. Such are the places where every man, woman and child seeks equal justice, equal opportunity, equal dignity without discrimination. Unless these rights have meaning there, they have little meaning anywhere. Without concerned citizen action to uphold them close to home, we shall look in vain for progress in the larger world.”

As Out & Equal founder Selise Berry said during the opening of the summit, “The world is a better place for all of you who show up to work every day.”  Thank you for showing up and being the change. 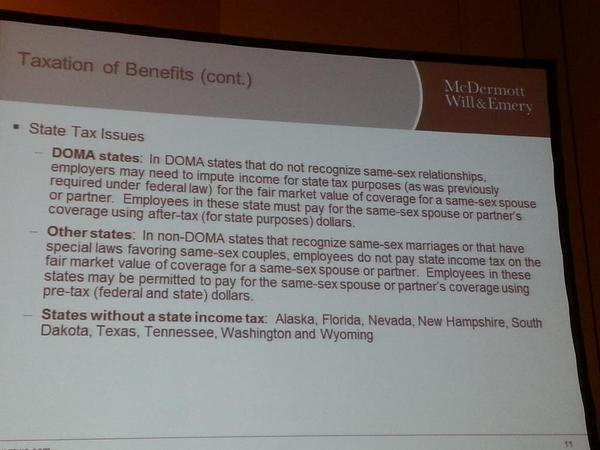