I want to provide an overview about possible decimal issues in BPS Planning used in the CRM Marketing scenario. There are some known issues related to decimal settings in PBS planning. This blog should provide information about the design of the decimal validation and how to set up the planning layout correctly. Furthermore this should contain a collection of solutions for known issues.

When looking the the planning layout created for a trade promotion in CRM we can see a key figure in the plannning layout defined with 2 decimals.

I will take these example to explain the design.

When setting up the planning layout the following 4 level dependencies need to be considered.

When the planning layout is rendered the first level that is considered is the UPX Layout Definition. In transaction UPX_MNTN the number of decimals can be defined: 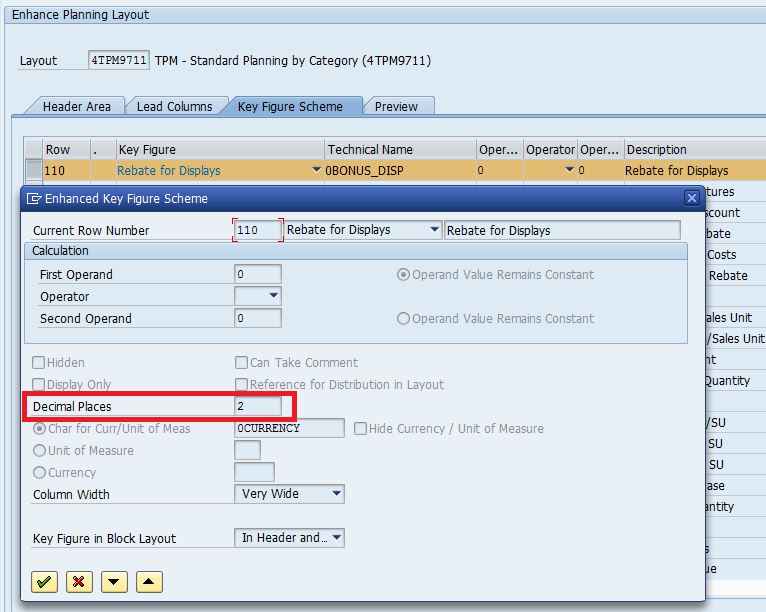 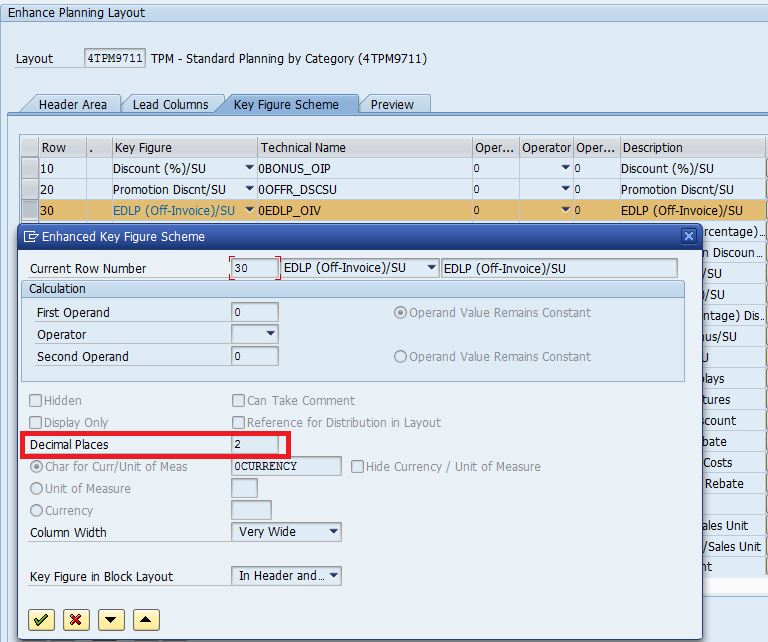 The decimals places set in the UPX layout defines the number of decimals displayed in the planning layout. This number is for display reasons only.

On the second level there is the BPS0 Customizing. This is the first level that defines how the key figures are stored. That means key figures are rounded to the number of decimals defined in BPS0 and stored as the rounded value.

If there are no decimals defined in BPS0 the same rule is valid for the key figure definition in RSD1. 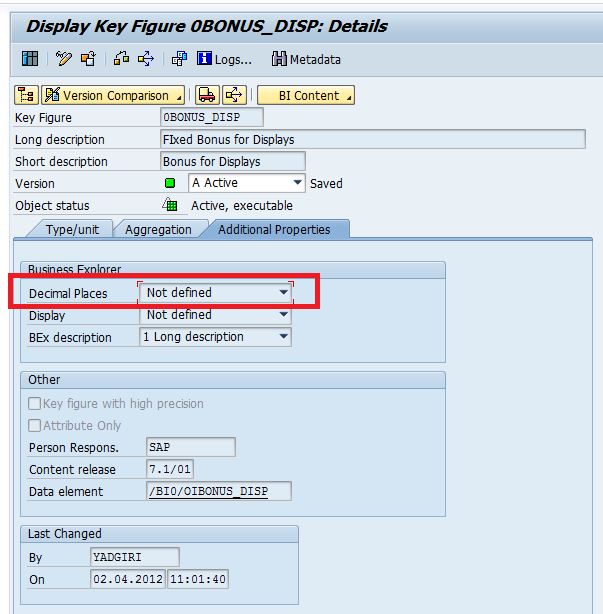 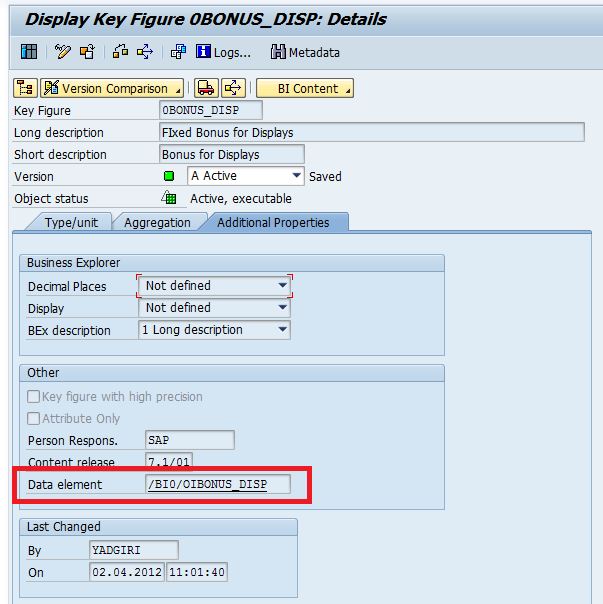 Please refer to the following KBA for further information about the dependencies between the different levels:

For key figures defined with having zero decimal places the following needs to be considered.

When having 0 decimal places defined in UPX_MNTN, system considers the BPS0 settings. To display the key figure with 0 decimals, both the UPX_MNTN and BPS0 decimals need to be set to zero. 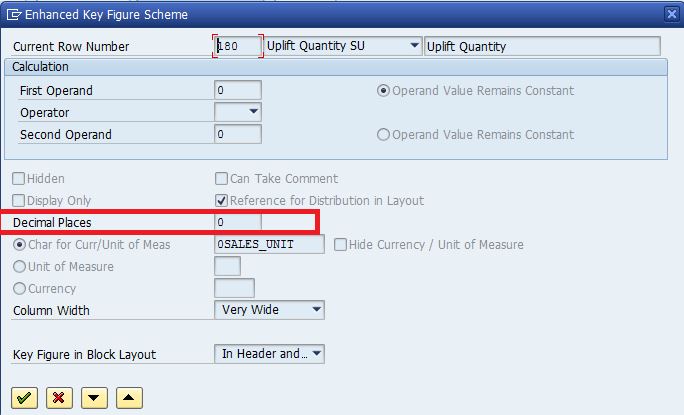 In case UPX_MNTN has defined 0 decimals but BPS0 has 2 defined 2 decimals the settings from BPS0 will be considered and the key figure will be displayed with 2 decimals.

This design is valid for zero decimal key figures only. For further information please refer to the following note:

What needs to be considered for percentage based key figures?

The number of displayed decimals is taken from the UPX_MNTN settings as well. 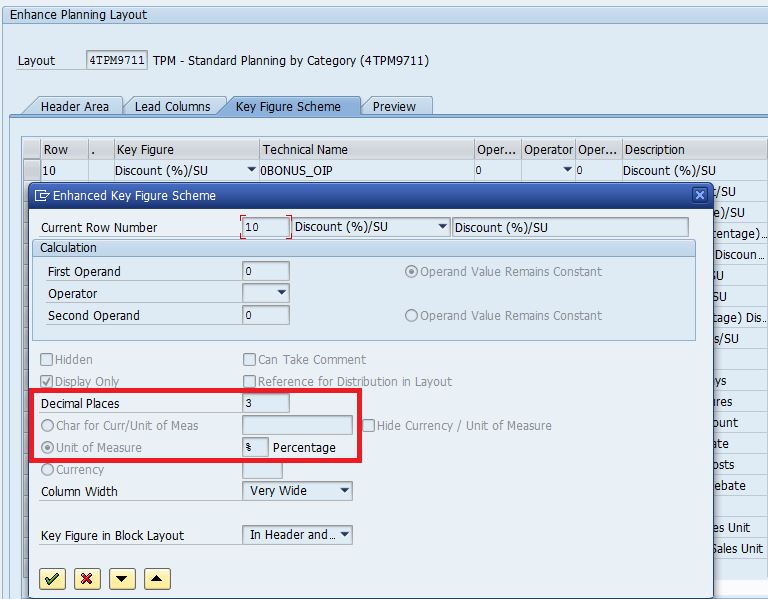 This is documented in the following SAP note:

There are some known issues for percentage key figures, those are solved with the following SAP notes:

If percentage key figures need to be diplayed without any decimals the following settings are to be applied:

UPX_MNTN: the key figure needs to be set to 0 decimals

BPS0: the key figure needs to be set to 2 decimals

This fulfills the rule for zero decimals in addition to the percentage key figure rule to require 2 more decimals as displayed.

2106896 – Decimal issues in Planning Layouts when working with exceptional currencies

1535708 – Plan data for currencies without decimals

Certain key figures use a Unit of Measure – in that case the decimal settings for the UoM defined in transaction CUNI (table T006) are considered for the key figure.

When generating condition in a CRM trade promotion using BI rates the BPS key figure values are retrieved for getting the conditions amount. This may lead to rounding issues. The following note should solve those rounding issues:

2196545 – Discounts are getting rounded while generating conditions

There are some known issues that are corrected with the following SAP notes:

2106896 – Decimal issues in Planning Layouts when working with exceptional currencies

2085223 – Decimals issue in Planning Layouts rendered with the class CL_UPX_LAYOUT_RENDER

The blog will be updated on a regulare basis. If you find any information missing please let me know.

We are facing an issue: If we edit 20th field in the planning layout, which is at far right side, and press enter then the cursor would come to 1st field. In order to edit the 21st field user has to scroll again.

Could you please indicate, where would have we gone wrong?