Between the cloud and a hard place

The cloud computing infrastructure (aka data center) business
is a tough place to be these days – and it just became a whole lot tougher.

This week Google doubled down on its efforts to grab a
bigger share of the cloud computing infrastructure pie by slashing its IaaS
(Infrastructure as a Service) pricing for the second time this year.

The price cuts, which range from about 25 per cent to almost
80 per cent, cover a broad range of infrastructure services and are likely to force
Microsoft, IBM and Amazon – the 800lb gorilla in the space – to respond. When
Google cut its prices earlier this year, the move was quickly matched by Amazon
which has around a 27 per cent share of the cloud infrastructure market at
present. 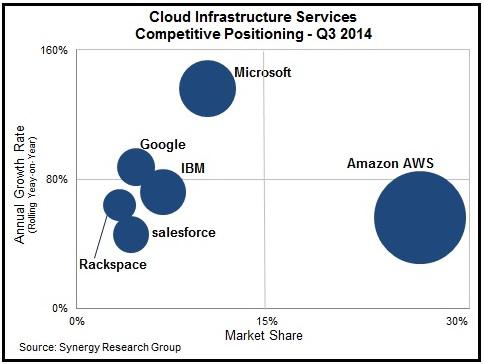 Google, which is the smallest of the big four cloud
infrastructure providers (but the second fastest growing behind Microsoft)
according to figures from Synergy Research, has said it wants cloud pricing to
fall at a pace equal to Moore’s Law, implying a 50 per cent price cut every 18
months.

Some analysts believe this ‘cloud pricing war’ could last a
decade. As in other rapidly commoditizing markets, that implies shrinking
margins for all participants, and the growing importance of scale which is already
squeezing smaller cloud infrastructure market participants including Rackspace
and Salesforce.

Absent scale, it makes more sense to partner than to try and
go-it-alone – a factor that no doubt figured prominently in the thinking behind
SAP’s recently announced cloud infrastructure partnership with IBM.

At the same time as cutting prices, Google also launched
several new network connectivity options and cloud infrastructure services this
week that appear focused on meeting developers’ needs and persuading them to choose
Google rather than Amazon.

Among the new services, Google announced support for ‘Docker
containers’ – an increasingly popular alternative to virtual machine technology
– that we are likely to hear a lot more about over the next 18 months.