This Blog post documents one of my Fantasy Football teams, “Chips off the Old Block” and my lineup decisions for the weekend of Thursday, October 30 through Monday November 3rd. As a die hard Philadelphia Eagles fan, I am loathe to support the NY Giants (unless they are playing the hated Dallas Cowboys), but I was hoping against hope that Eli could deliver a stellar performance on Monday Night Football.

My name is Michael and this is my Fantasy Football story.

Right now, my team called “Chips of the Old Block” (in deference to Eagles coach Chip Kelly) is mired in 7th place with a 4-4 record. Every selection, every lineup change, every starter must deliver if I am to make the playoffs.  I got lucky last week and rang up a season high 124.25 points, led by Rob Gronkowski’s 32.9 & 23.0 from Matthew Stafford, 18.0 from Eddie Lacy plus 23.0 from Larry Fitzgerald. But this week, I will not have the luxury of three key players.

The bye has arrived for Detroit, Green Bay and Atlanta which is putting me in a tough situation. The bye is eliminating Matthew Stafford, Eddie Lacy and Julio Jones from my lineup this week. With these three out, I could use some capable fill-ins.  Here are the pick-ups I made for the week:

This is not an optimal situation, but I had to make the following adjustments to my starting lineup:

The big decision was who to start at wide receiver this week, so I took advantage of the SAP Player Comparison Tool.  Here are the relative rankings:

The player comparison tool tells me to start Reggie Wayne and Jordan Matthews over Steve Smith and Wes Welker.

Right now, I am losing 64.70 to 68.80, but I still have some cards up my sleeve. Tonight in the Monday night showdown, I have Eli Manning and Reggie Wayne.  Unfortunately for me, my opponent has Andrew Luck and the Colts defense.  The projections still have me winning 96 to 90.65.  My hope is that Eli can outscore Andrew Luck, while Luck throws all his TD passes to Reggie Wayne.

Going into the Monday night matchup, I needed to overcome a 4.1 point deficit to win, but the outcome was sealed based on the following:

All this resulted in a loss for my team 105 – 101.45, even though the combination of Reggie Wayne and Jordan Matthews scored 23.00, (compared to the 6.7 that the combination of Wes Welker and Steve Smith scored). At least the SAP player comparison tool provided the right advice.

Below is the final result, depicting a devastating loss, putting me in 9th place in our league.  With a 4-5-0 record, I think it is fair to say that I will be on the outside looking in when the playoffs arrive in a few weeks. 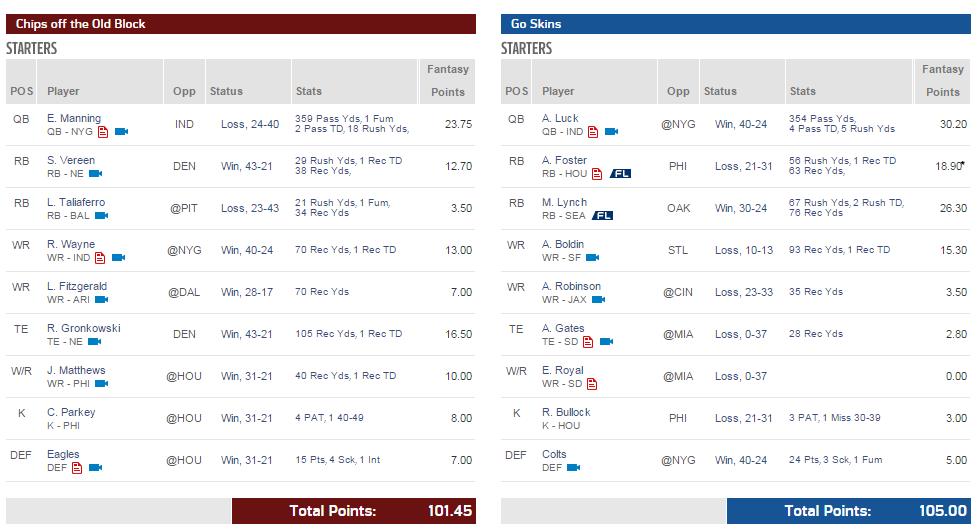 You're a better man than me for blogging about your fantasy sorrows.  But so it goes!  What a crazy year in fantasy.  I've had many heartaches  this season.  Not sure if the game is healthy for me!  I'm just trying to stay off the Benjamin Franklin Bridge at this point!!  Doh!!

Ross, All I can say is that I have a better record than you.  But that is not saying much. 😆