A team within SAP is developing an analytical application to help combat the spread of Ebola. The current outbreak poses a global health and safety threat and requires the help of everyone to be contained.

All hands on deck: The outbreak of Ebola in several West African countries, and the threat of it spreading to Europe and the United States have mobilized hundreds of volunteers around the world to combat its spread. Volunteers have ranged from individual healthcare workers to global companies like SAP, who have joined forces to develop a cutting edge advanced analytics solution to support the helpers in their challenging task of fighting the disease. Our goal is to provide large health organizations with this application to support their mission. This solution promises to be not only valuable in the field in Africa, but can also be used by state authorities to screen passengers of incoming flights from affected countries.

Our plan: We want to make an efficient and fast diagnosis of the disease possible, which is essential for medical personnel to make the right treatment decisions. The developed application will first enable doctors and helpers to gather data on infectious diseases. This information will be subsequently fed into a central database. Based on input from remote doctors and machine learning, the application identifies whether a patient may have been infected with Ebola.

Kevin Richards, Head of U.S. Government Relations at SAP interviewed the WHO and US State Department representatives to identify the key challenges that operators in the field are facing. It became clear that one of the biggest influencing factors is the ability to collect the patient data when in most cases there is no stable connection to the internet. Hence, the quality of collected data will be determined by the robust offline capabilities of the application, which then can be synchronised to an overall data hub as soon as an internet connection becomes available. 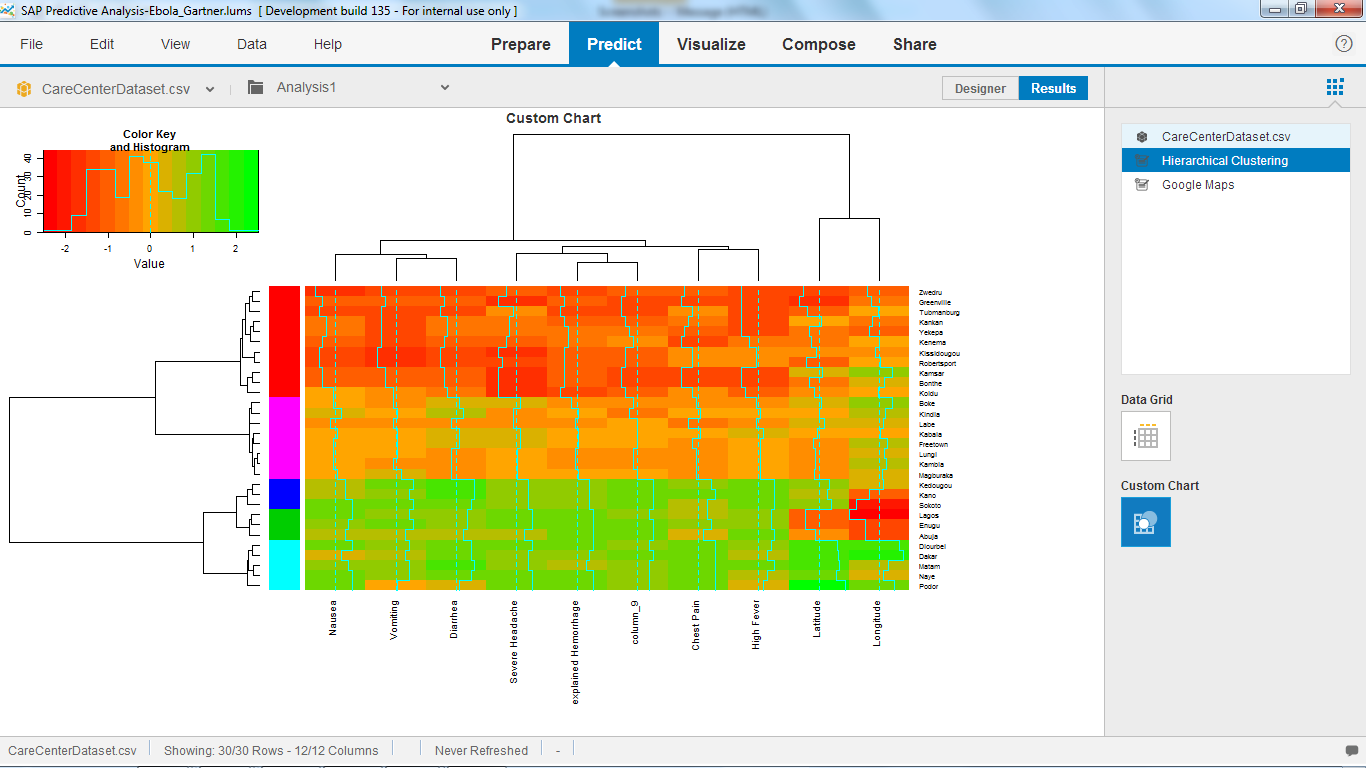 Data collection & Diagnosis: Whenever a doctor or a volunteer thinks someone may be showing signs of an infectious disease, they can open the application and navigate to the “Add Patients” Tab. The doctor can take a picture or make a video of the patient and report their symptoms. This data is then sent to a central database along with the doctor’s geo-location and submission time. The application is a cloud solution which can be accessed easily on any mobile devices. The collected data can be stored on the device and synchronised later, as soon as an internet connection becomes available.

Once the data is uploaded, remote doctors are able to comment on each patient, help with the diagnosis and give treatment recommendations. Meanwhile SAPs Advanced Analytics solution InfiniteInsight clusters the described symptoms, patient data and the judgments of the doctors in the background of the application. This way it can be determined what reported symptoms are most highly correlated with an Ebola diagnosis. For example the symptoms of chills, blurred vision, nausea and vomiting, ulcer, severe headache, and unexplained hemorrhage are the symptoms that are the most important in determining if a particular patient may or may not be infected with Ebola. Upon further analysis into the contributing variables, it becomes clear that ulcers, chills, and blurred vision are the most commonly reported symptoms not associated with an Ebola diagnosis. Conversely, the contributing variables of nausea and vomiting, unexplained hemorrhage, and severe headache are associated with the disease. As the Algorithm determines which symptoms are significant indicators, the application is able to push a preliminary diagnosis to the helpers even in offline mode and an appropriate treatment can commence without any delay. Additionally, the application will allow the tracking of any mutations and subsequent symptom changes of the disease over time and geography. 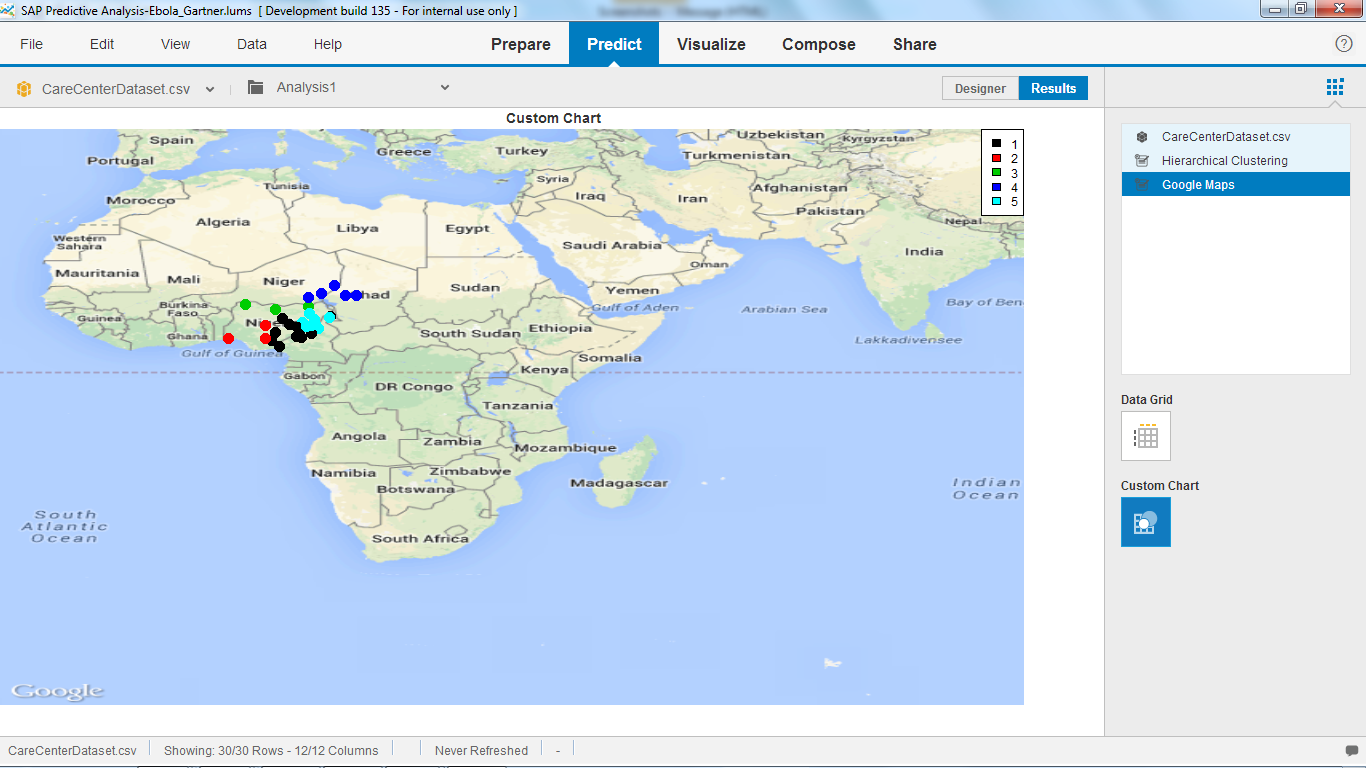 Forecast: One of the biggest challenges is to understand how the disease will spread during the coming weeks. Hundreds of lives could be saved if we would be able to predict in which cities Ebola is going to break out next – With SAP’s Advanced Analytics we can provide a tool that will give the necessary insights into the future spread and development of the disease based on the data patterns of the collected incidents. Users will also be able to view an infographic in the app to see the current spread of Ebola and information about the appropriate safety measures.

Well written Sara - how exciting to be involved in a topic that is so to the fore-front of our minds at the moment. Continued success in your project!

Thank you very much Wendy!

Mitchell Grewer Ashley McNutt Megan Laughlin I heard you were involved in an interesting DataViz challenge. Maybe you are interested in this project as well?

Susan Keohan , Marilyn Pratt mentioned that this project could be of interest to you?

I'd love to see what your team could have done with the data provided by Megan McGuire of MSF for the #dataviz challenge at #saptd.

I couldn't agree more Susan. We would love to get the chance to experiment more with real data!

This is awesome! What are the next steps?

Hello Mitchell. We have to work closer together with the big health organisations that we intend to equip with this solution and also leverage the knowledge from further internal parties. I would be interested about the data visualisation project that you worked on. Can I read about it somewhere?

One thing you can do is to watch this:

Then of course you could search SCN for the MSF challenge.  I know quite a few people have already blogged about it.  Maybe searching for Megan McGuire (the epidemiologist for MSF who has graciously spoken at both SAPTD LV and Berlin).

Here are some blogs about it:

The overall SCN MSF Initiative: I Care, I Gave, I Inspired

My Experience with The DataViz Challenge for Charity

Let me know if you have any questions.