In the Las Vegas TechEd after watching the video of Bjorn Goerke  keynote, where he announced the partnership of SAP with APIGEE, API Management Company, that got me going to find more about what is API and API Management. As commonly known API is Application Programming Interface, in the recent times has been emerging as tool for programmers to utilize and consume.

In my last article on High Performance application, I dived deep into low level programming, to understand the computer architecture and leveraging it to build high performance applications. Like HANA did for creating an In-Memory columnar database. API concept is quite opposite and encourages at different level and the objectives are as following:

Famous examples of API are Google Map API, Facebook API and Twitter API. The success stories of exposing google map within so many different scenarios have really helped the world to create beautiful application with google maps shown as user interface. Within SAP itself more than good percentage of the demo shown in various innovation event have google map embedded in it. This not only enhances the demo with visualization but also provides great feature for developers for actions (such as zooming, finding nearby places, etc..).  Key to API design is being intuitive (ease of consumption like iPhone usage), being intuitive helps developer to consume it directly without having to go through the documentation or tutorials etc..  and helps in quick adoption (viral).

One of the good resource to know what kind of API already exists is at http://www.programmableweb.com/, with nearly 12272 API listed, I would recommend all programmer / entrepreneur / business analyst to spend some time and check out the various services available for the business use case they plan to build or are thinking.

Figure 1 provide details of growth of API’s since 2005 (reference from research center programmableweb), it clearly shows an surge in API and the growth rate increase, which supports the theory of digitization and many companies taking on the API approach for the business adoption and expansion in multiple dimension with the power of developer community. 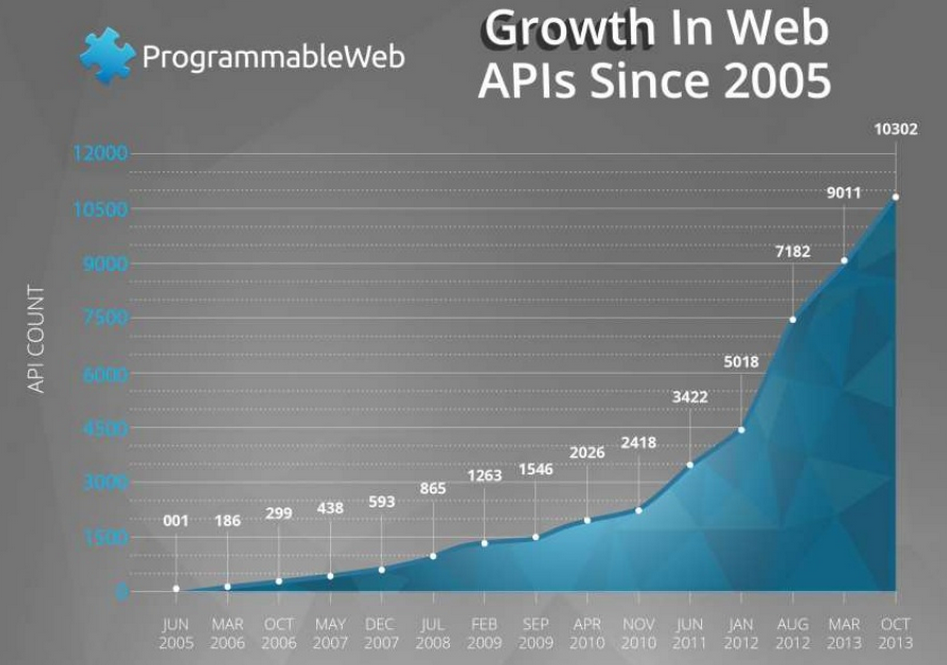 Figure 1, showing the increase in API’s

Figure 2, showing the increase as per category, one can clearly see the surge in social, financial and enterprise category. 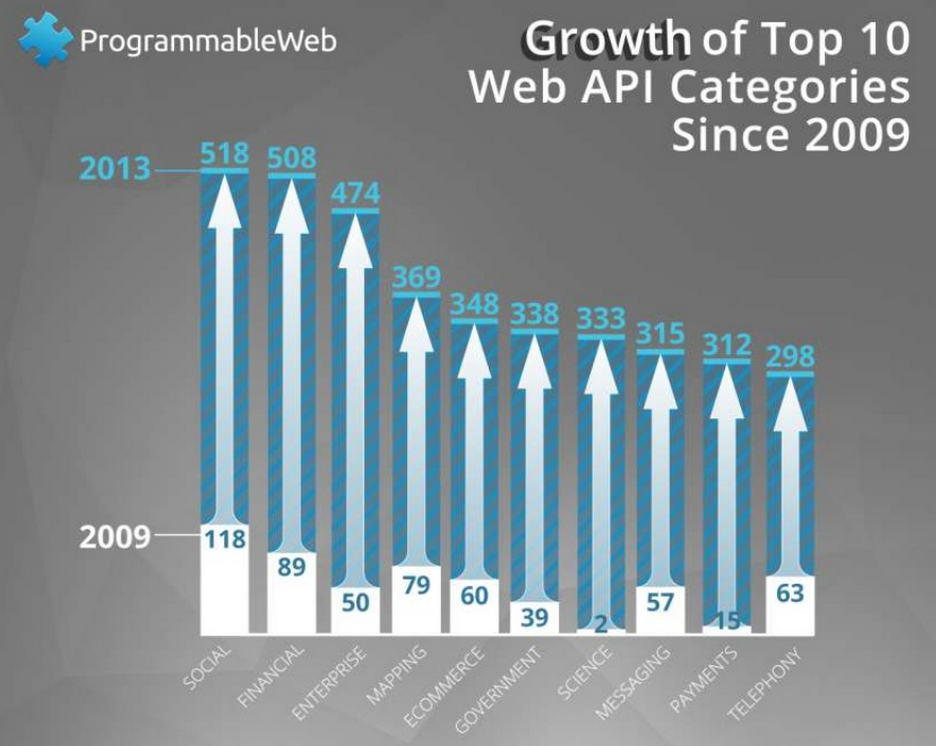 Thanks to the data provided for last 6 month (reference research center of PW) clearly shows the rise in Financial and Enterprise API’s, which means involving external / partner developers community is the new trend which IT industry is going through for digital experience and software application creations. Figure 3 shows the same. 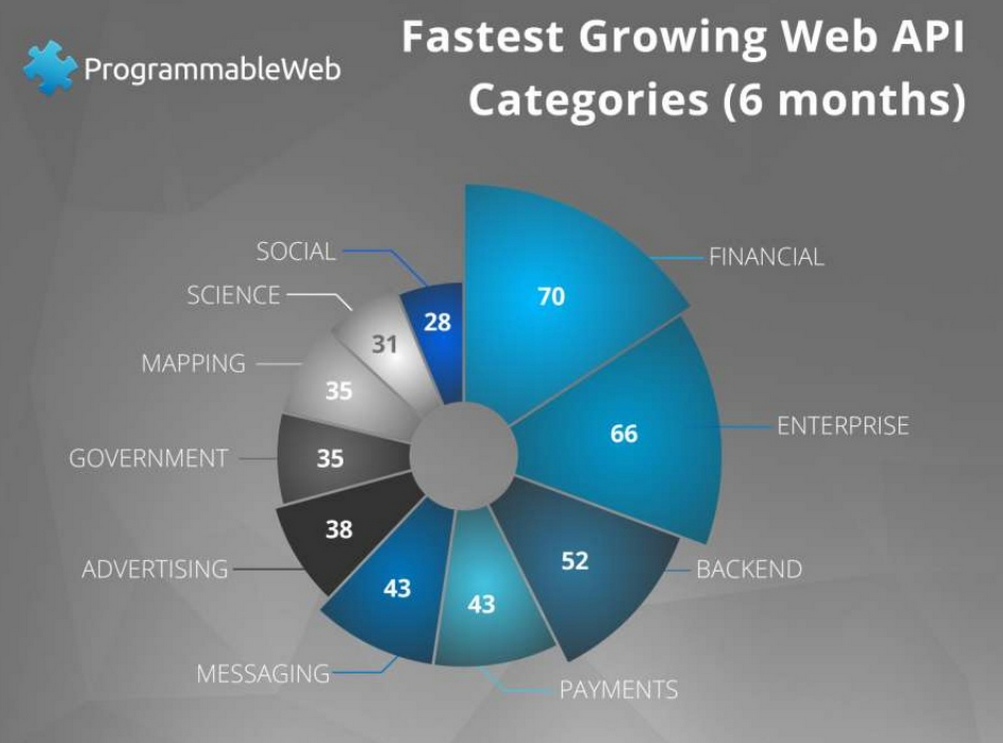 The above published data of Research Center | ProgrammableWeb clearly supplements SAP getting into partnership with APIGEE and encouraging internal as well as partners/ external developers to create API’s for enterprise business on premise, managed cloud with HANA Enterprise Cloud as well as within our cloud based offering of HANA Cloud Platform (HCP) and exposing the business functionality to external programmer to help our customer business further.

Companies such as Amazon, Google, Facebook, Netflix have created great business out of API itself. Each of them got benefited from the developer’s community for coming up with business use case and leveraging the API and resulted in win-win case of both company and application developing external developer or Partner Company. Good example is Netflix which could survive its competition from Blockbuster by ability to provide the API which allows the access of it’s 100,000 movies and its movie ratings etc… and they are accessed using secure OAuth standard security to expand its business in the digital media via internet streaming of videos and movie and TV related information.

API economy is the term of building the economy (review) around business development and moving towards the open yet secured culture. Open, since it opens up the internal data from company for usage to external developers. It is secure since the developers / partner company are authenticated for the use. Programmers are efficient in solving business problem while consuming the API to materialize the solutions. This is also driving toward ease of materializing the go to market (GTM) strategy for programmers or partner companies and evolution of mashup application (more than one API’s get used).

For API to be easily consumable they are accessed using HTTP request and are JSON and RESTFul service, which are intuitive and light weight too. Using the GET / POST of HTTP the programmer can consume the API’s. With the growth of API and every business looking to expand in various horizons is exposing the API’s for successful business target with the unprecedented power of developer and business community aspiring for entrepreneurship.

Another good example of API economy is banks, bank exposes API for loan or EMI’s, this is a great example of bank reaching out to users via various mashup applications in product and regions where it was not possible to think as bank. All ecommerce websites today provide EMI’s or payments using the API provided by banks. This is once again a win-win scenario for both programmer building the application and bank making more business with interest or fee per transaction for payment.

The term mashup application development evolved when more than one API’s are utilized in developing the solution, which generally is the case these days, most commonly used Google Map API’s generally get used along with other service such as payment API or one of the directory API’s. The mashup applications have grown within mobile based applications where the geo-location is easily known for the user and many use case leverage that for finding the nearest house, restaurants, hospital, etc..

API Economy is exposing data (hiding the personal data) to unlimited programmers and business expert to utilize it. Lot of time such as bank or other business have lots of legacy code for data which need to be converted into RESTful service for exposing to the world such as EMI calculator consumes the bank confidential data and provides the EMI calculation for the end user. This brought in place the requirement of API Management Interface which helps companies in quickly turning legacy code into RESTful API’s. They also provide management of the API’s for programmers in secure way by providing the token key for usage. Other features such as monitoring, scalability and gateway service are bundled with it. This area has grown and companies such SOA Software, APIGEE and Machery are few companies which are already in this space. They provide end to end platform from creating API’s, consuming existing API’s easily such as Google, Facebook etc.., managing your API’s, internally using API’s, enabling mobile consumption  via gateways, monitoring API’s using analytical service.

In today’s world of digitalization happening around us companies with collection of data and trying to build everything, aren’t going to be success, whereas the strategy to create an API and let the world figure out use case and consume, would lead to fruitful result. Philosophy of utilizing thousands of programmer and business’s instead of single handedly doing all works and drive the economy or revenue via API’s.

Today we see the evolution of mashup kind of application or architecture with many of standard functions being taken from API’s provided by third party. This also supports the microservice architecture of unit of task processing in it own process, such as in case of finding the hotel near you one, one would consume Google API and Hotel near the user with ability to check-in online using the payment gateway service of PayPal or local bank near the user. In this mashup application the programmer applied Google, Foursquare and PayPal API’s.

It is not just business which are publishing APIs also government such as US government publishes its API https://www.data.gov/developers/apis for its citizens and developer to utilize and build application for citizen awareness or other use cases to help citizens. The idea is same, let the masses work with the knowledge or data government have and create beautiful and useful solution for citizens.

The adoption of this economy can been seen with many example such as mentioned in the keynote gogo, walgreen, Google, Facebook, Twitter, etc.. to even India companies such as Zomato which is listed in ProgrammableWeb for its services of restaurant listing and its review, locations etc for programmer to consume in the new business application. I found about nearly 30 listed API’s from India companies such as PropertyWala (real estate property listing API), Sansad.co (Indian Government API’s for parliament and information on legislation and Bills), Aadhaar (government, provides online authentication service), Travelyaari which exposes more than 10,000 routes, and many in SMS space. It is good to see the API economy adoption within India too.

Let me take another example of taking an appointment of doctor from hospital, currently each hospital is getting customer appointment from its website or phone calls and hospital need to invest in creating a good user interface web as well as web application for doctor’s appointment, instead if they simply expose the doctors availability data to external developers as API’s, they could potential have several application creating appointments for them. This is a good scenario of mashup application where in future using Google API an developer can find out all nearby hospital from user’s location and find availability of doctor as per medical discipline with ease using multiple hospital API’s embedded  in the application. Similar to flight schedule data and seat availability shared between airplane career company and applications creator such as Expedia or Makemytrip.com providing the bookings.

SAP announcing partnership with APIGEE would help customers and SAP for externalizing the services as API’s and letting developers / partners of SAP HANA Cloud platform building application. This definitely is a good direction for SAP to help in being part of API Economy or digital world.

Good thought to start API Store like famous app Stores for mobile. Thanks for the insight. quite useful information and direction for next gen.

Great article  and  revelation  !! .. and  then its  just  a matter of  finding  right APIs to increase bank balances 🙂