The next event that showed how the Internet of Things (IoT) is taking over at SAP, was Innojam 2014. This was the first year that it was hosted on the SAP Campus in Palo Alto.  The theme this year was IoT Agriculture.  If you would like a good blog post about some ideas go to Ian Thain’s Blog about it, but here is a teaser:

In the current drought situation it is essential to lessen the environmental impacts of farming, due to better water consumption, reducing soil erosion & degradation, taking into account, crop specification, local climate (light & wind etc) & predicted weather conditions. This could possibly be extended all the way through to harvesting, transport & shipping (Field to Port) lessening infrastructure challenges, but thats another story!

So that is the set up. On to the details.

The attendees where given presentations from a number of partners and SAP about the technology that they were providing.  From SAP there were presentations about the SAP HANA Cloud Platform (HCP), SAP UI 5, Lumira, and others.  And since this was also a hardware hack-a-thon, they were given access to BeagleBone Blacks, Raspberry Pis, Ardunios, and a lot of sensors to build their solution.

As is the hallmark of Innojams, the attendees went from a bunch of strangers, to team members and started working on their solutions, using the training they just received from the SAP Design thinking team.  Soon ideas were on white boards and Post-its were everywhere.  The SAP IoT team helped by giving pointers on how easy it is to get sensor data into the SAP HCP, and then from there they could mash up, and visualize their data to tell their story.

Fast forward 24 hours, with little or no sleep (although there was good pizza and beer), numerous design changes, and lots of code written, the sleepy participates presented some great ideas. (to see more about each of the winners, head over to Ian’s write up).

The winning team from SAP presented their Connected Cow scenario.  Their solution would follow the cow through out their day, monitoring it for the amount of food/water that it consumed, how much milk produced, and its health.  They even demonstrated feeding their IoT Connected Cow by showing the cow being fed, and how they would monitor its scat.  They did this via the best use of coffee cups (their prototype cow), IoT feed bucket (another coffee cup), and feed and scat (skittles).  Two of the winners were flown to Las Vegas to present their idea at SAP TechEd && d-code’s Hacker’s Lounge and the IoT Lab.  Here they are presenting at the Hub.  (Look at the table and you will see the cow who is eating). 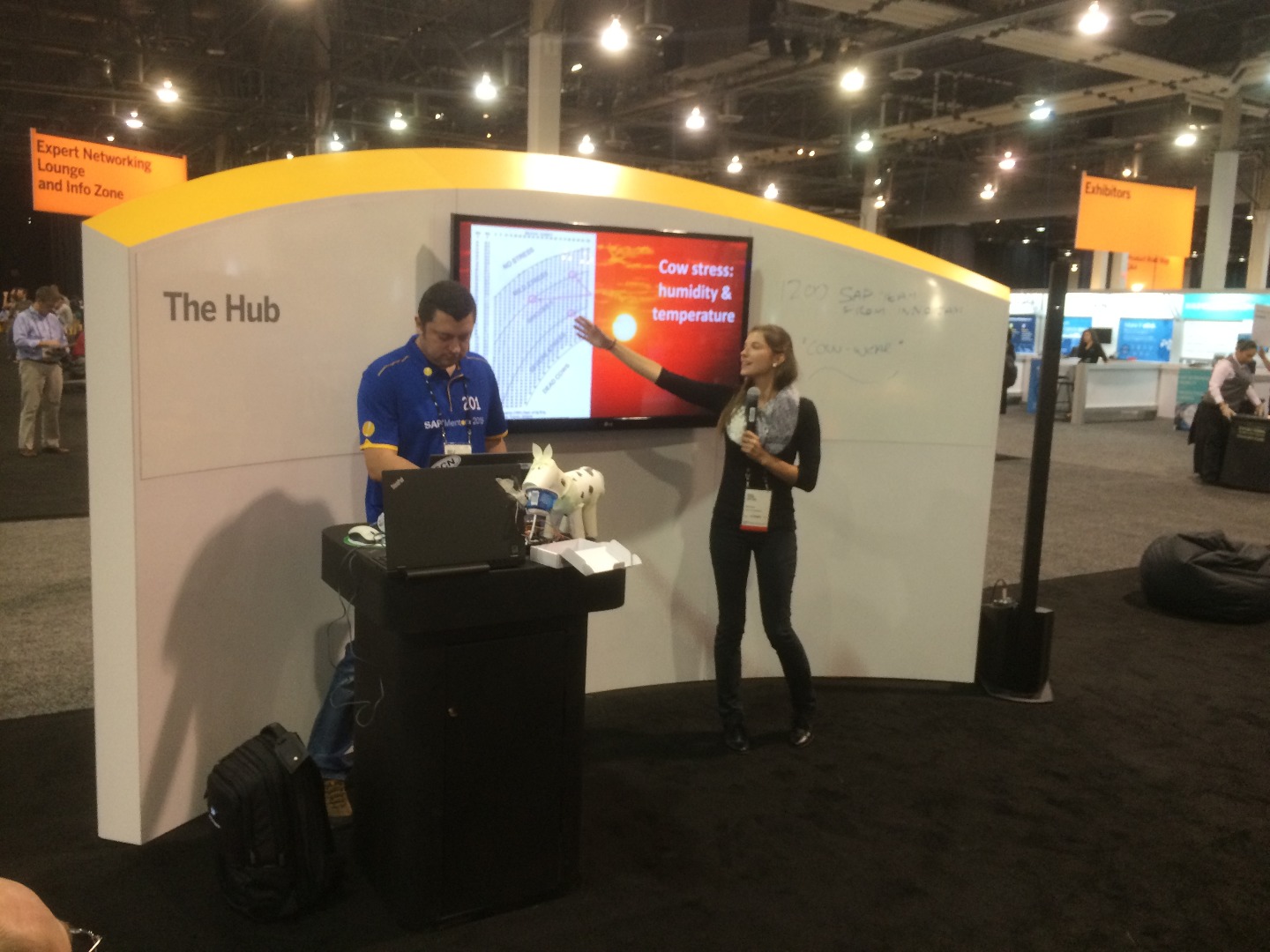 The winning external idea was from a team from California State University, Chico and their drone based weed control solution.  Their prize was a trip to Vegas to present their solution on the big stage as part of Demo Jam (spoiler alert, they got second)  Go here to see their presentation.

For us, two events down, but only have way through our 8 days.  Next stop, SFO and flight to the city that runs 24/7 and the big event SAP TechEd/d-code 2014.

Next up Vegas, some sleep, an IoT Scarecrow, and I finished the week up $42…