During Business Blueprinting of any SAP project, most of the time the implementation team and the client team of different SAP Process Modules needs to work together but it seldom happens. There will be always lot of meetings, discussions, workshops happening and many a time we tend to capture the outcome in some local text or word files later struggling to collate all of them. People tend to travel a lot especially if the client team is spread in multiple countries.

Keeping all these in mind, it always helps if we have a collaborative simple framework which will be accessible to everybody being hosted in public cloud and if the framework can host some of the reusable questions that are commonly raised in the workshops along with sample data.

When I first thought of building such a platform, I was thinking what should be the starting point . I know business processes and their designs are always big thing in the SAP projects but we already have lot of very powerful business process modelling tools available in the market including IBM’s BPM for SAP.  Hence I thought of starting with a simple questionnaire framework which will contain all the common questions that are in general raised during any businss blueprinting workshop and you need to either suggest the probable answers as implementation expert or would expect the client to answer it and you should be able to capture it immediately. It also makes sense to map those questionnaires to one of the most common deliverables in any SAP projects which is the IMG Configuration nodes Process area wise.

With these basic ideas, I started designing this collaborative platform using IBM PaaS Bluemix. The basic building blocks or steps to build and deploy the application in Bluemix was simple 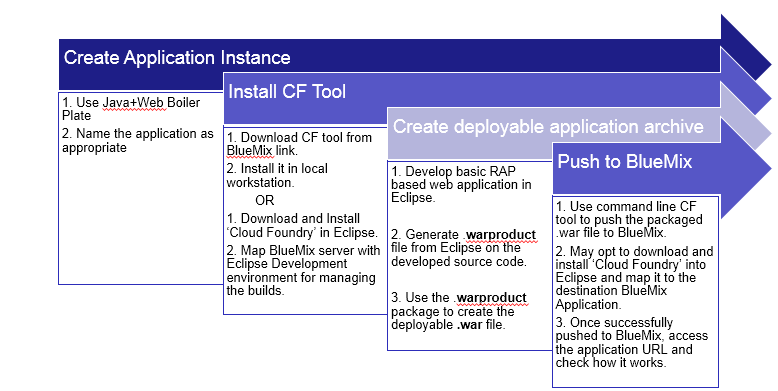 But we need to understand the overall architecture first especially if we need to build the integration layer with such SaaS with any enterprise application like SAP. So once this architecture is understood, you can now follow the steps described below to build the integration layer with SAP and your application in bluemix . 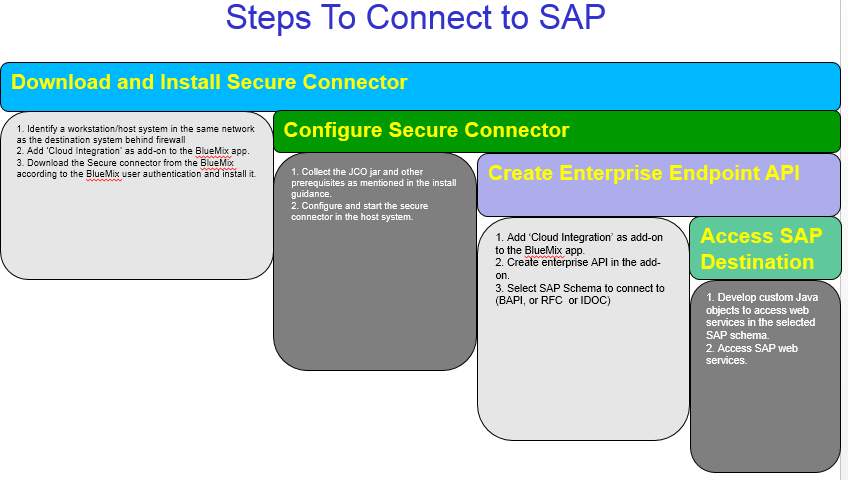 Now let us talk about the application which we built. It would be easier to understand if I provide some screen-shots first 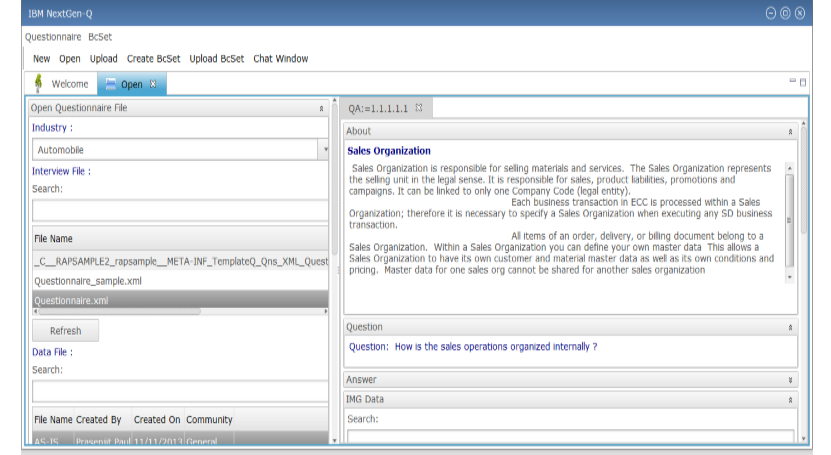 For the particular industry , if we open the pre-built questionnaire, it will contain lot of details of each of the entity that are used as Configuration objects.  Along with that, it will also open the relevant questions and there would be a form to capture the answers.

Once this questionnaire is saved , you can directly upload in Solution Manager BPH. You can also create the BCSet file and upload them to any target SAP instance if you feel. We tested the SAP integration in the BCSet upload case.

On SAP side, we created a Z function module which is RFC enabled and can read the BCSet file as a string and then in the code it transfers to an internal table in the correct format and then calls the standard code to upload and save in SAP. Then we created the enterprise API in Bluemix using the RFC function in Cloud Integration Add-on. The relevant API is then called from the java layer of the bluemix application.

With the advent of Cloud-based Paas like IBM ‘s Bluemix available, building such application from scratch and even creating the integration layer is now just matter of few days. It will really usher a new era to serve client’s any demand in much realistic and accelerated manner.