I accepted the challenge to join Thrones of Data.  With the Lumira Application I wanted to analyse the past Cycling season.  Who was the real champion of last season?  Regarding ProCyclingStats Valverde tops the ranking, Contador and Kristoff fulfill the podium.  Everybody who watch the season knows that Valverde was absolutely superb during the whole season.  So no question about that ranking.  But I wanted to zoom in the most legendary races.  And via that filter, check out whether the great champions in the ProCyclingList as well stand strong in races like the Tour de France, Ronde van Vlaanderen etc. 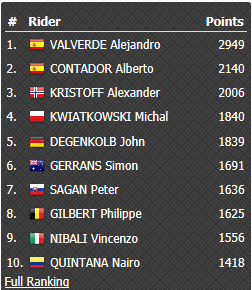 Let’s get more information out of our data and strech the list-reporting into a real slice and dice of data.  Let’s Lumira-ze !!!!!

My first analysis ranks the top 10 cyclists of the legendary races.  What we learn about that is that the cyclist who focuss on only one big tour, tops the ranking.  Nibali winning the Tour de France, Quintana, winner of the Giro; Contador winner of the Vuelta, but scoring no points in the other stages.  Aru who battled in the Giro and Vuelta (maybe) will have to choose in the future if he wants to be at the top of a tour.  While in the classics we see most of the top 10 cyclists reappear and Spartacus, Cancellara, topping it off with a win in the mythical Ronde van Vlaanderen, 2nd place in San Remo and a third place in the hell of the north, Paris-Roubaix.  Strangely enough this fantastic achievement didn’t result in a top 10 overall the season. 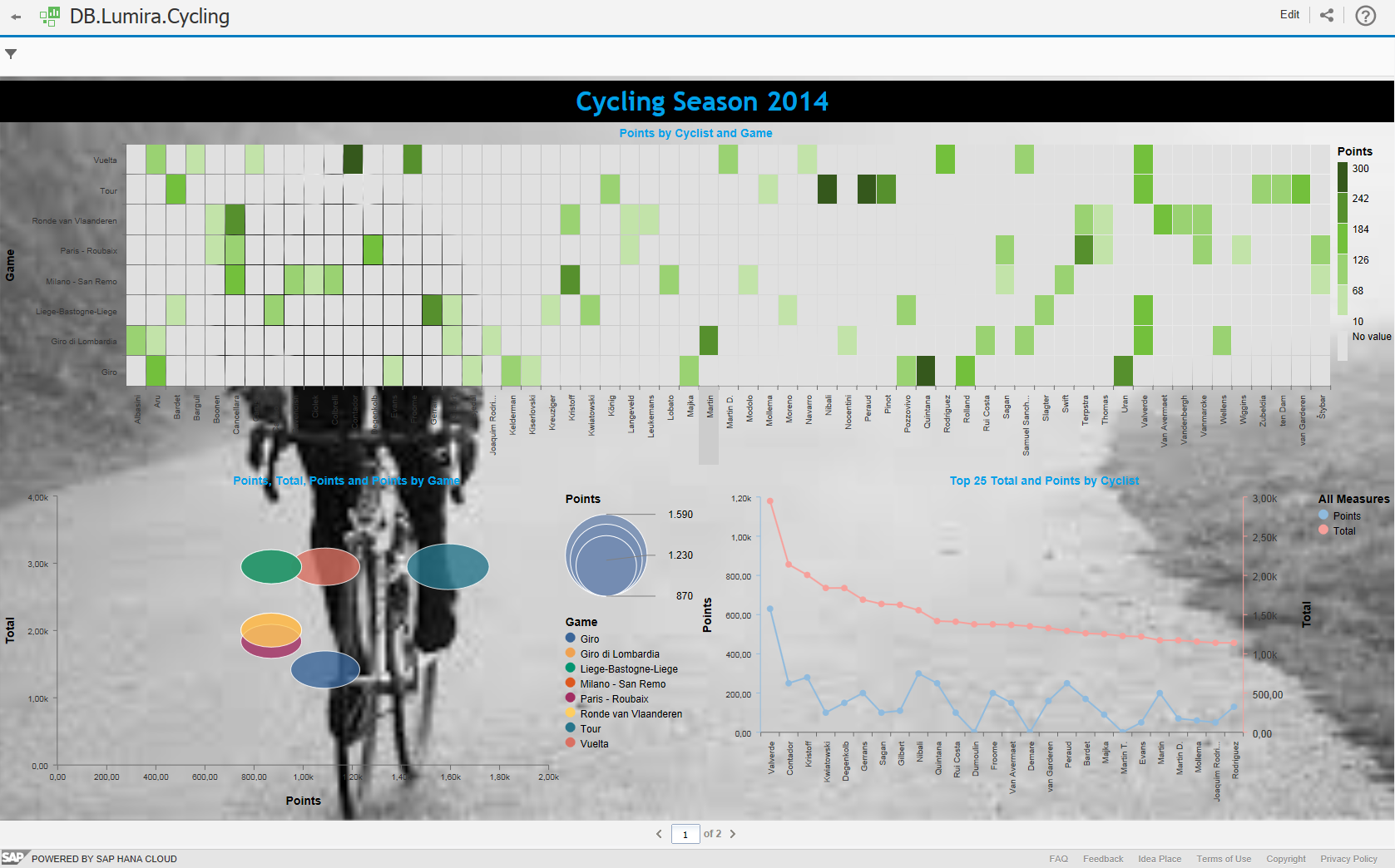 The spring classics in detail.  Only Cancellara was present 3 times on a row in the top 10. 8 other riders managed a 2/3, congrats!  So almost 2/3 of the top 10 spots are taken by reconcurrent riders.  So, the specialists are known 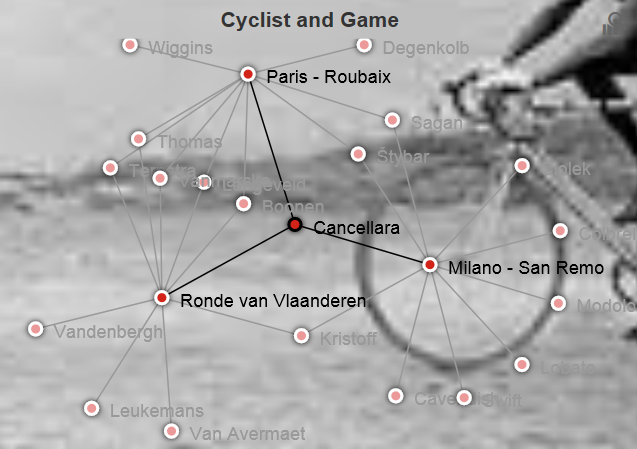 What about the points over all the races merited and the points gathered in the big 8?  Let’s analyse.  In the line chart we compare the stats, respectively via the pink and the blue line.  Valverde is topping both.  Contador second in the overall, scores rather low in the big 8.  So he merited most of his points in the other races.

Nibali, Quintana, Peraud, Martin D. achieved their top ranking almost exclusifly via the Big 8 – points.  Kwiatowski, Sagan, Gilbert scoring high overall but low in the Big 8.  Dumoulin, Demare and Tony Martin scoring 0 points in the legendary races.  Tony Martin won a stage in the Tour de France, but we only consider the general rankings.  So, sorry Kittel and co.

Let us focus more on those Big 8 races.  On page 2 of my analysis I embedded a filter so we can focus on one stage at the time or check out liaisons between them. 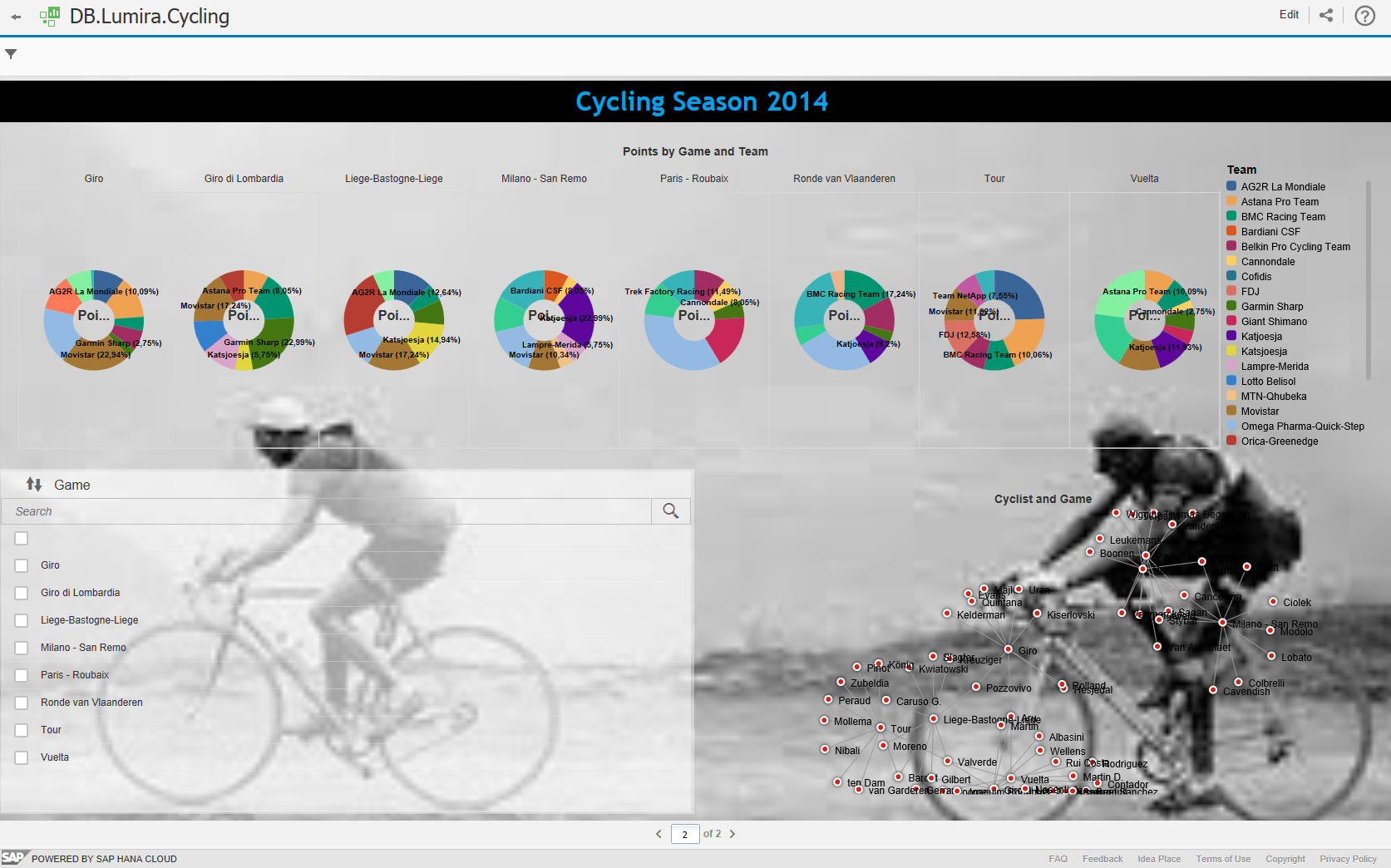 In the trellis-pie chart we can see which teams scored big time in which races.  The light blue of Omega-Quickstep springs directly out of the rest.  Being big in Paris-roubaix and Ronde van Vlaanderen, no surprises here.  But scoring as well in the Giro, Milano-San Remo and La doyenne, Liege-Bastogne-Liege.  Astana scored high in all the three great tours.  And Ag2R showed quality and quantity in the Tour and the Giro.  In overall presence, BMC scored highly with a top 10 in 6 of the 8 grand races.  Remarkable is that the continental teams were able to score points as well.  So World Tour teams, check out the continental teams, there is talent! 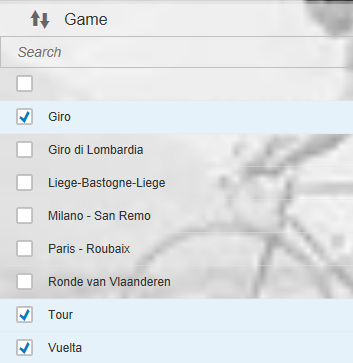 Now, lets check out some liaisons.  We filter now on the big three tours. 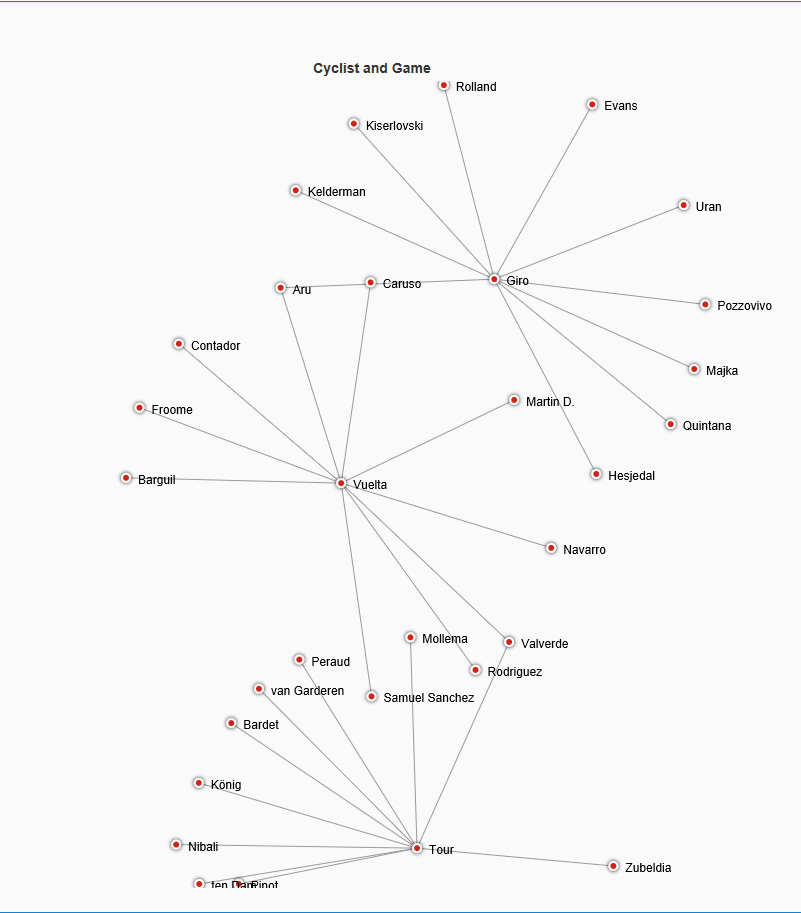 This chart is highly interactive and let us interpretate on a very easy way data.  A click on a cylist changes the view, so the data is showing more transparently.

Valverde, the name is reapearing in every stat, and Aru are the only two cyclist who were able to score in two Tours.  A remarkable prestation of the young Italian, we must say. 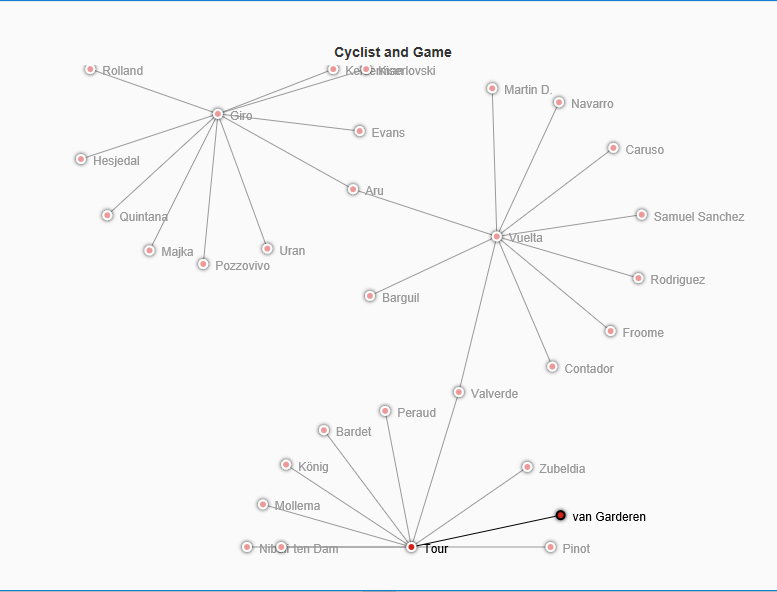 When we check out the legendary classics only.  We see 2 groups, the flat and the hilly ones.  And Omega Pharma Quickstep jumps out again.  While Trek was very present in the flat classics, was Astana presence noticable in the hilly ones. 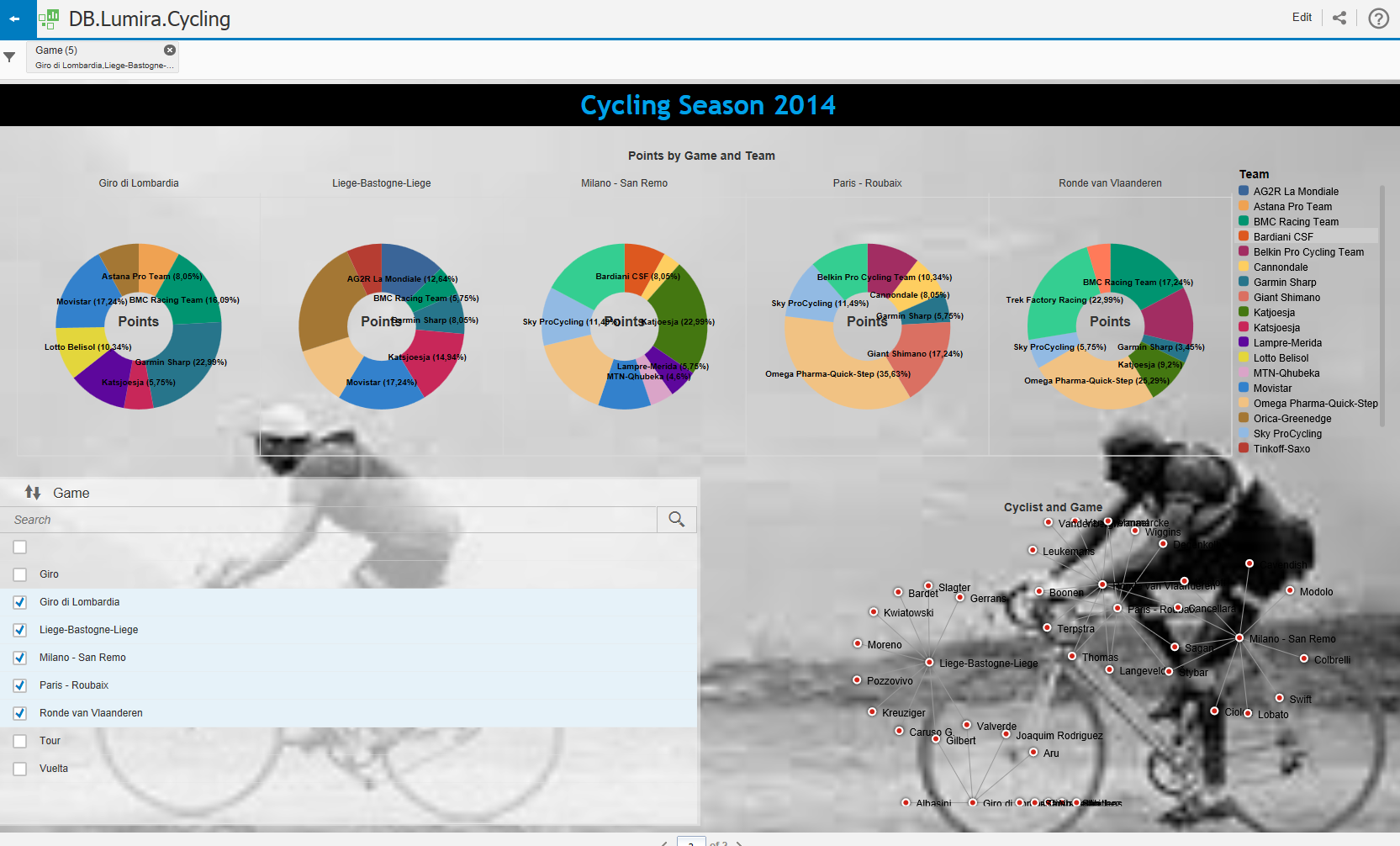 If we add the “flat” classics in the network chart, we see that nobody was able to rank in those two types of competitions.

But Wiggins, ex-winner of the Tour de France, ranked this year in the top 10 of Paris-Roubaix.  So cheers to him and we can hope that other cyclists follow his example! 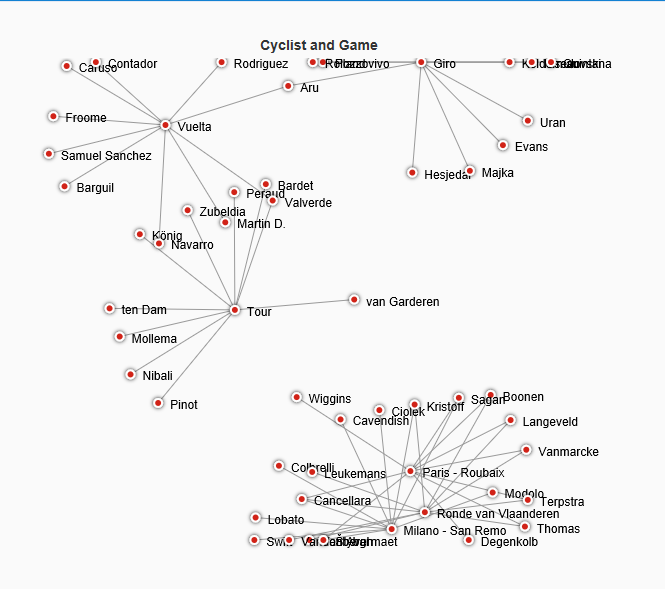 When we replace the flat classics with the hilly classics: Liege-Bastogne-Liege and Giro di Lombardia.  We see that this was absolutely the year of Valverde.

Ranking not only in the big tours as we already stated but also in two of the five legendary classics.  Although he didn’t win a legendary race, his ambition to win during the whole season deserves a great applause.  Winning the hearts of the cycling fans.  In his footsteps we notice surely Fabio Aru.  Who scored as well during the whole season points.  Being top 10 in Giro, Vuelta and Giro di Lombardia. 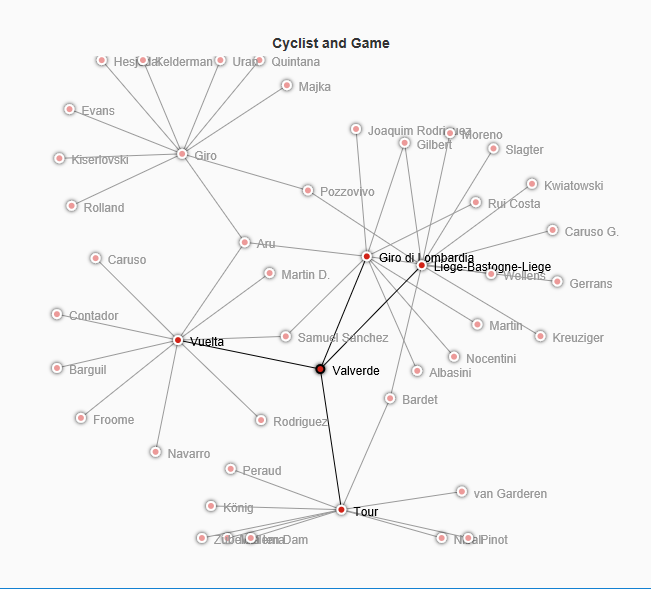 On page 3 we analyse the cyclists not grouped by team, but by country.  The Spanish overpoise in the tours is undeniable.  We can as well conclude that the cyclist are focussed or skilled in the races of their own country.  The Belgians are topping the ranks in the Ronde van Vlaanderen, the French in Le Tour, the Spanjards in the Vuelta.  While the Spanisch cyclists are great in the three-week contests, the Belgian ryders are in the one-day races.  The Italians showed they battle on both types of races. 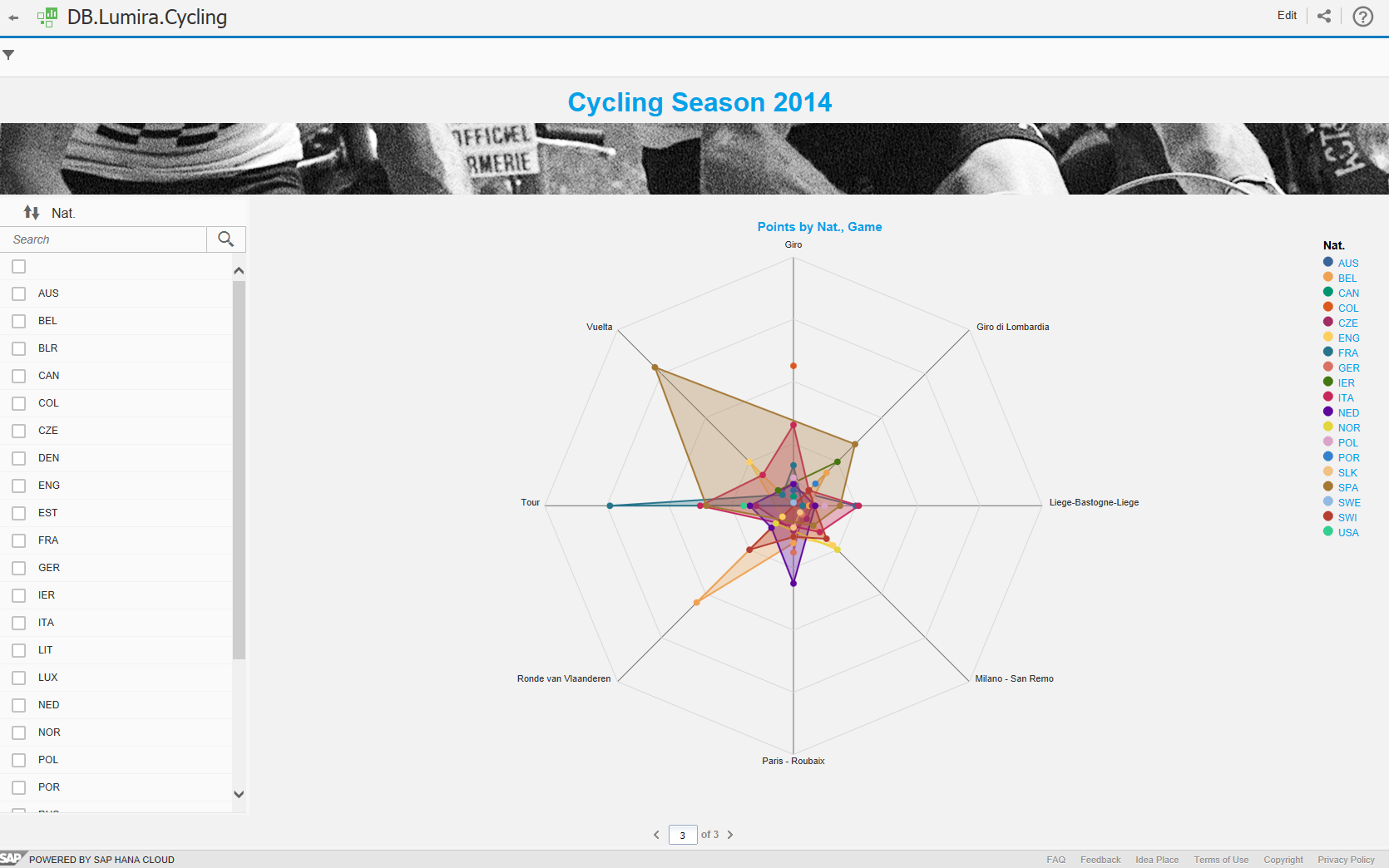 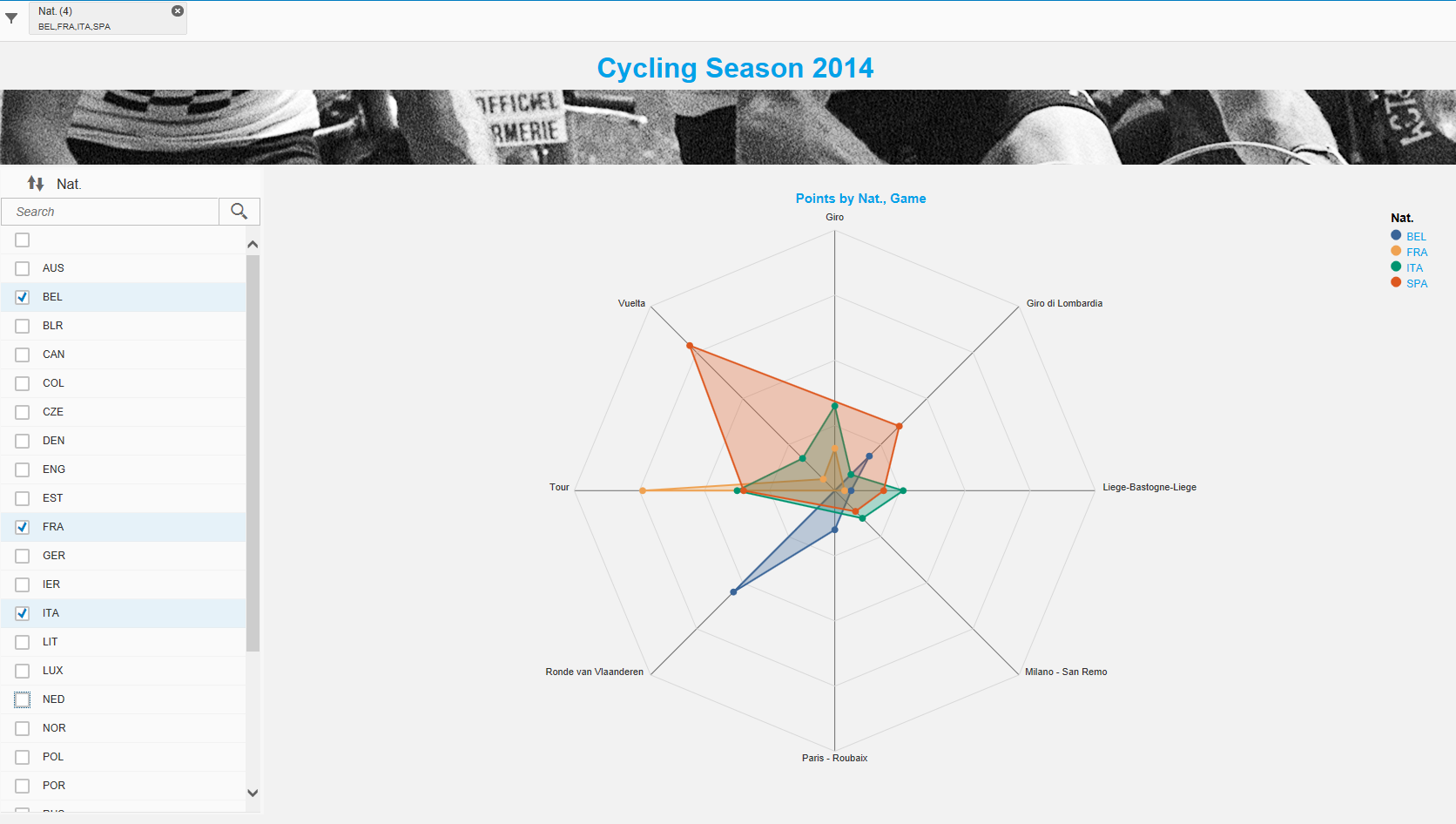 Conclusion of the analysis: Valverde merrily deserved his first place but the ranking has left out great cyclists as Aru and Cancellara.  They surely proved big contribution to a fantastic cycling season.

Via Lumira we were able to fetch more information out of our data!

Awesome job Koen Hesters i never imagined we could do Data analysis in such a unique way.