The Future’s Arriving Sooner Than You Think. Here’s How to Get Ready.

With the exception of mathematicians, we humans can’t handle big numbers. The blame falls squarely on our ancestors. To survive, our knuckle-dragging ancient forebears needed to count how many people to feed, and estimate if enough animals were nearby to hunt. These were small numbers that changed little over many generations. Since there was no evolutionary requirement to understand either large numbers or the concept of exponential growth, we humans never developed these abilities.

But we need to start. Ever since the first microchip rolled off the line, digital technologies have been advancing at an exponential rate. So far, this has been apparent mostly in faster boot-up times when we get a new laptop. But soon we’re going to experience exponential in a new way: it’s going to change everything about the ways we do business. We need to better understand what these changes will mean to our complex world.

To illustrate the power of exponential, futurist Ray Kurzweil tells a story about the inventor of chess, whose demo to the Emperor was such a hit that he was allowed to name his reward. This clever inventor was also a mathematician, and he requested his reward in rice; one grain for the first square of the chessboard, two for the second, four for the third, and so on, doubling at each square up to the board’s total of 64 squares. The Emperor granted his request, viewing it as humble, and for a while things progressed as expected. However, after 32 squares, when the prize passed four billion grains, the Emperor started to take notice.  By the 64th square the sum had zoomed to 18,446,744,073,709,551,616 grains of rice, a pile that tops Mount Everest!

The Emperor’s failure to foresee this result was completely human.  What’s more, this is pretty much where we are today; about 32 doublings since the first real computers were introduced during World War II.  Indeed, exponential acceleration continues across the full range of digital technologies including raw compute power, data storage, bandwidth, transmission speed, miniaturization and myriad others. Three years ago IBM’s Watson supercomputer fit into a bedroom. Today it’s the size of 3 pizza boxes. 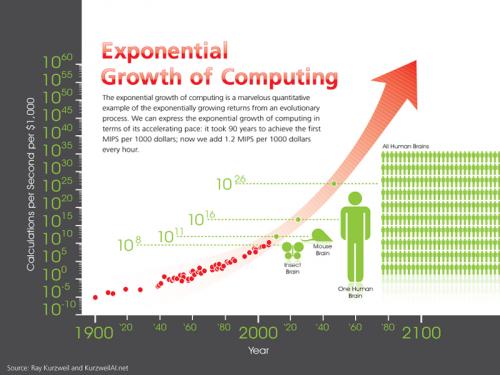 In plain English, under current trends the technological progress in this century could be of equal magnitude to all such progress over the last 200 centuries.

Consider that as recently as 2003 Facebook, Twitter, YouTube, the iPhone, Wikipedia and Skype either didn’t exist or were practically unknown. The explosion in mobile devices had barely started. Yet today these have transformed business and society. Now the likes of neuromorphic computing, 3D bio-printing, robotic bacteria, brain mapping, and next-gen virtual reality (to name just a few) are either here or just around the corner, with even greater potential to revolutionize.

Complexity holds us back

Advances in digital technology will march on at a mind-blowing pace, as will their potential to improve lives and help business run better.  But a big problem has arisen which threatens to hinder, indeed derail, the path to a brighter future.  Up to now, complexity has been a manageable downside to progress. Today it’s become a crippling issue of epidemic proportions. Research shows that children think life is too complicated, working professionals are having health issues from the stress of information overload, and personal relationships are suffering.  All this is a direct result of complexity. In addition, business executives say complexity increasingly impedes growth.  Perhaps complexity is the reason that labor productivity since 1999 is essentially flat despite a 49% CAGR in cost-performance of digital technology.

If left unaddressed complexity will undermine our ability to benefit from the exponential innovations on, and over, the horizon. Here are three things organizations should do to prepare.

To win the future, running simple today is the best way forward.

Isn't it ironic that technology, which was meant to simplify lives, has become so complex that it has complicated the lives more.

Anthony, thanks for your comment. It certainly is ironic. But I'm sensing a popular movement against complexity that's long overdue. Technology has always raced ahead of our ability to make sense of it. We'll never catch up, but perhaps we're catching on?