This blog was created as a part of Data Geek Challenge III in the category “House of Blacksmiths – Technology”.

Let’s imagine ! … A.D. 2030. Space Shuttle vehicles can fly to The Moon and Mars 😈 . It’s very profitable to carry cargo in space but total costs of those missions are immense. There are five main competitors in that challenge: USA, Russia, India, China and EU.

This is an analysis of all missions flown by Space Chuttles launched between 2020 and 2030.

The data used in this Data Geek Challenge blog was created for the sole purpose of developing visualizations in this story.

The data was saved to a MS Excel file. Then the data was uploaded to SAP Lumira.

I must admit, the uploading data in SAP Lumira is very simple.

In the first step the data was uploaded from the Excel file that contains data for mission designation, shuttle used, launch date, launch year, length of mission, numer of crew members, country, mission distance, amount of cargo taken, and total costs of the mission.

Then data was uploaded from another Excel file with country, city longitude and latitude.

This way two data sources have been created.

It was very easy to combine data from these data sources into one. SQL Left outer join was was used here.

Let’s have a look at some visualizations created in that story.

As it was written before there are two main destinations in Space Shuttle missions: The Moon and Mars. Only three space shuttles are used to fly long distance journeys to Mars, the rest fly to the Moon. 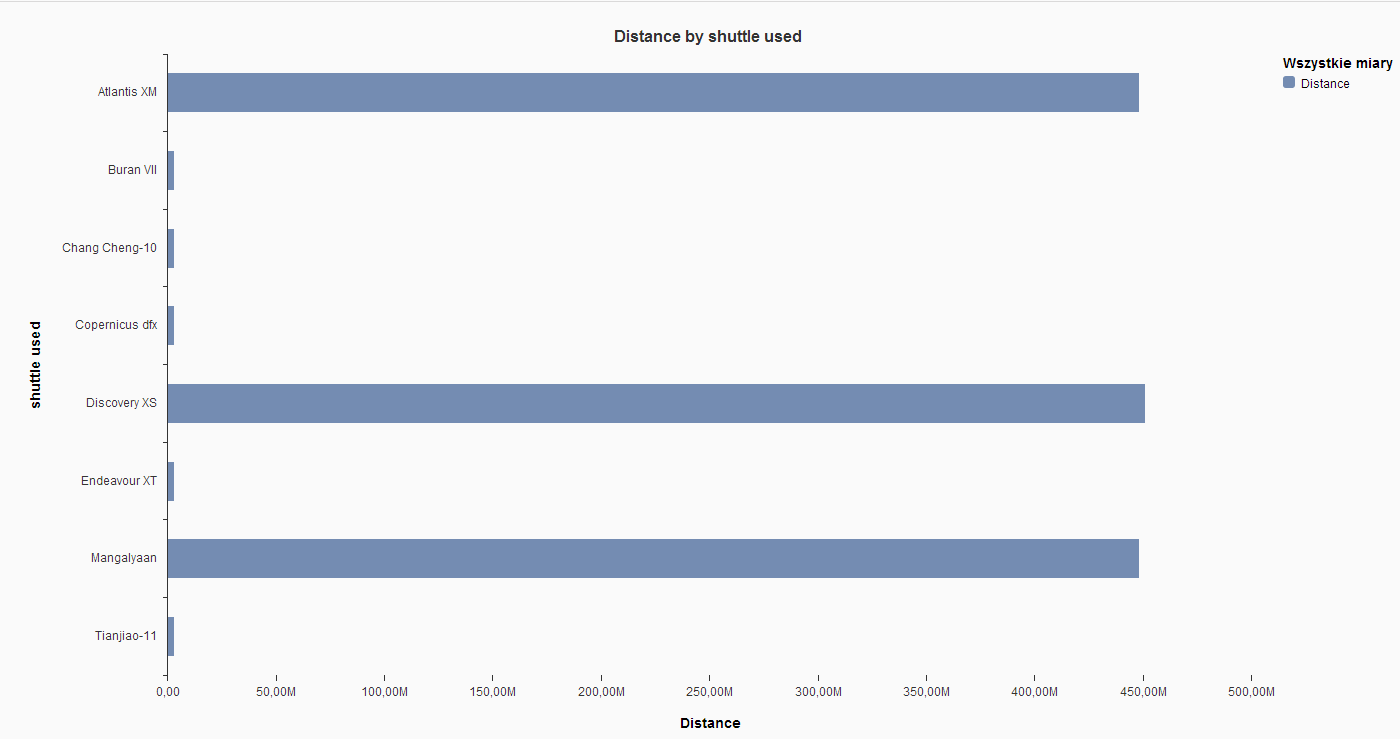 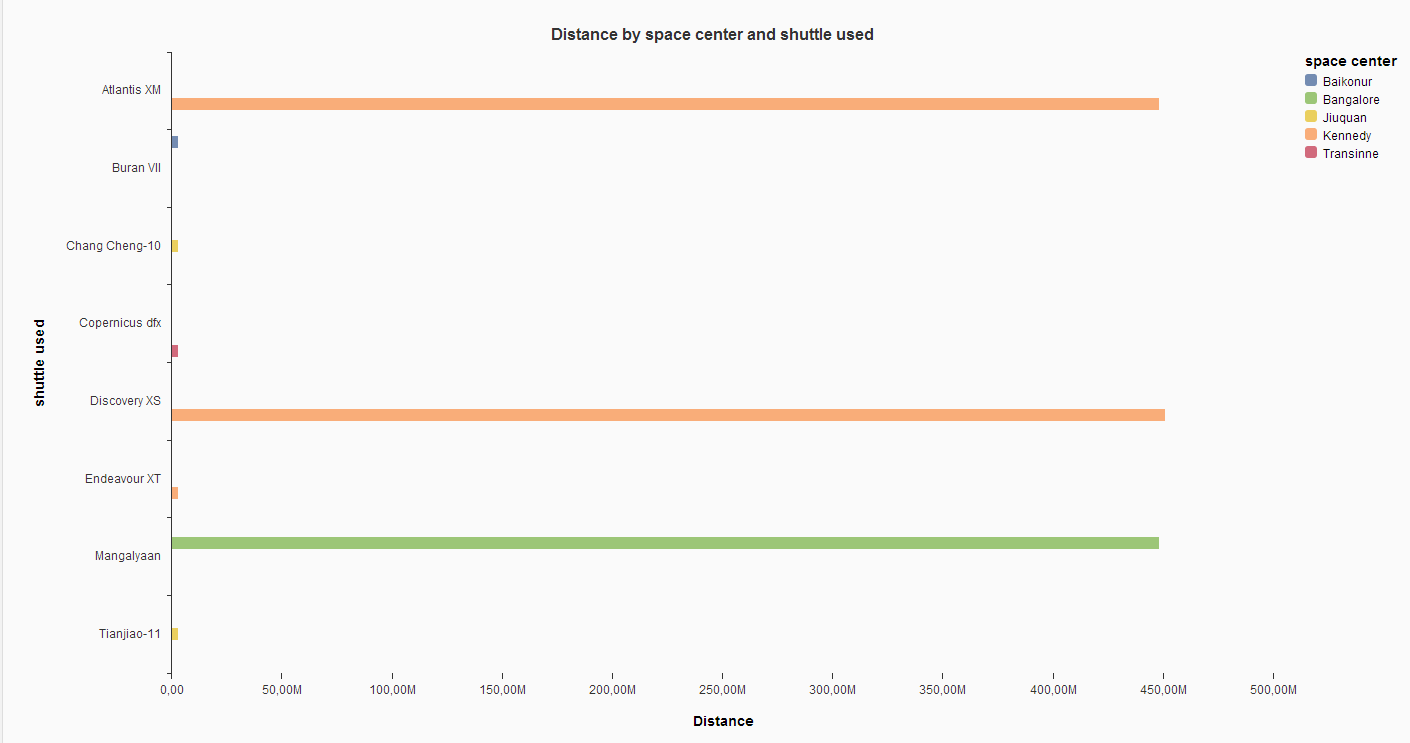 3. The amount of cargo taken by country and shuttle used.

Here we see the amount of cargo taken by space shuttles in different countries. The USA takes most. 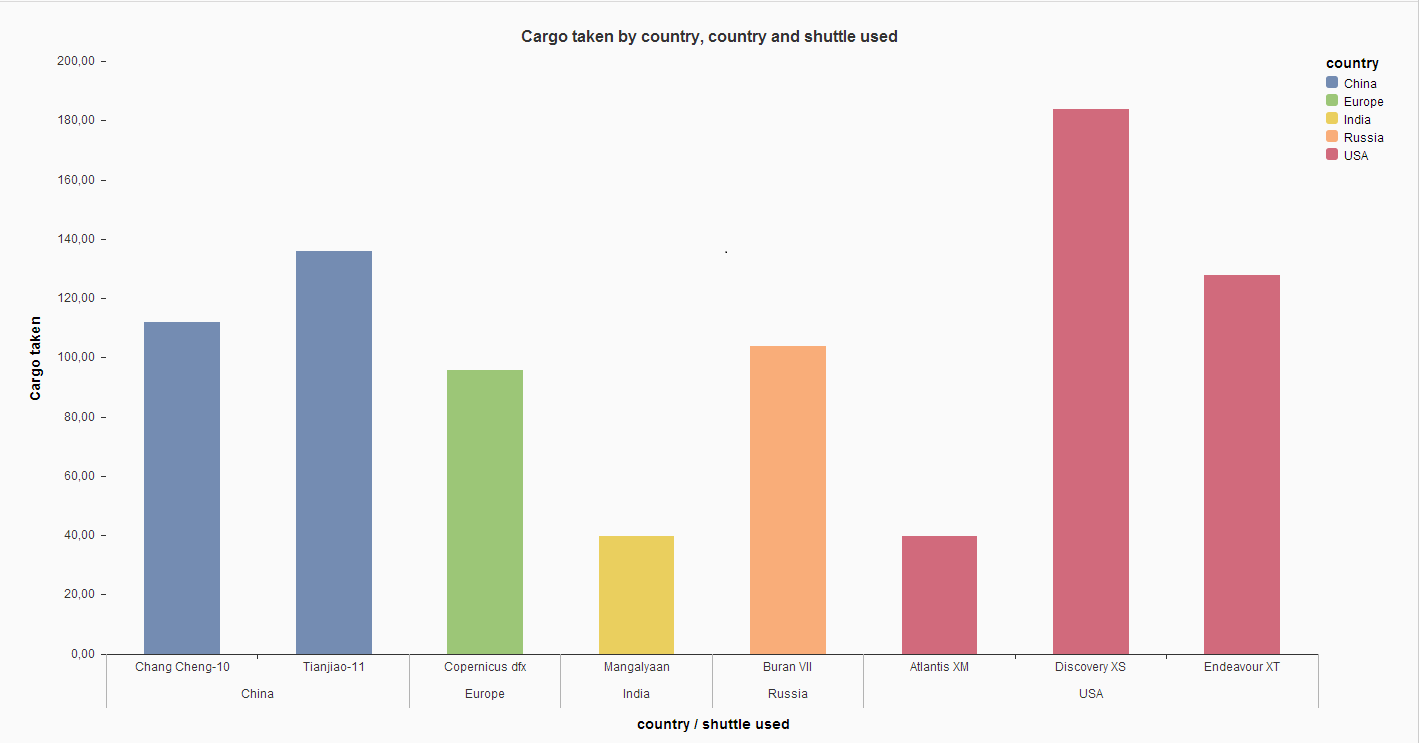 The data from above chart can be seen here: 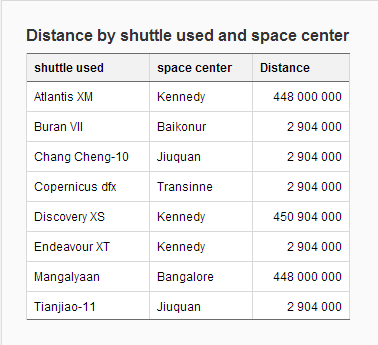 4. Costs of given mission are much higher while the mission designation is Mars. 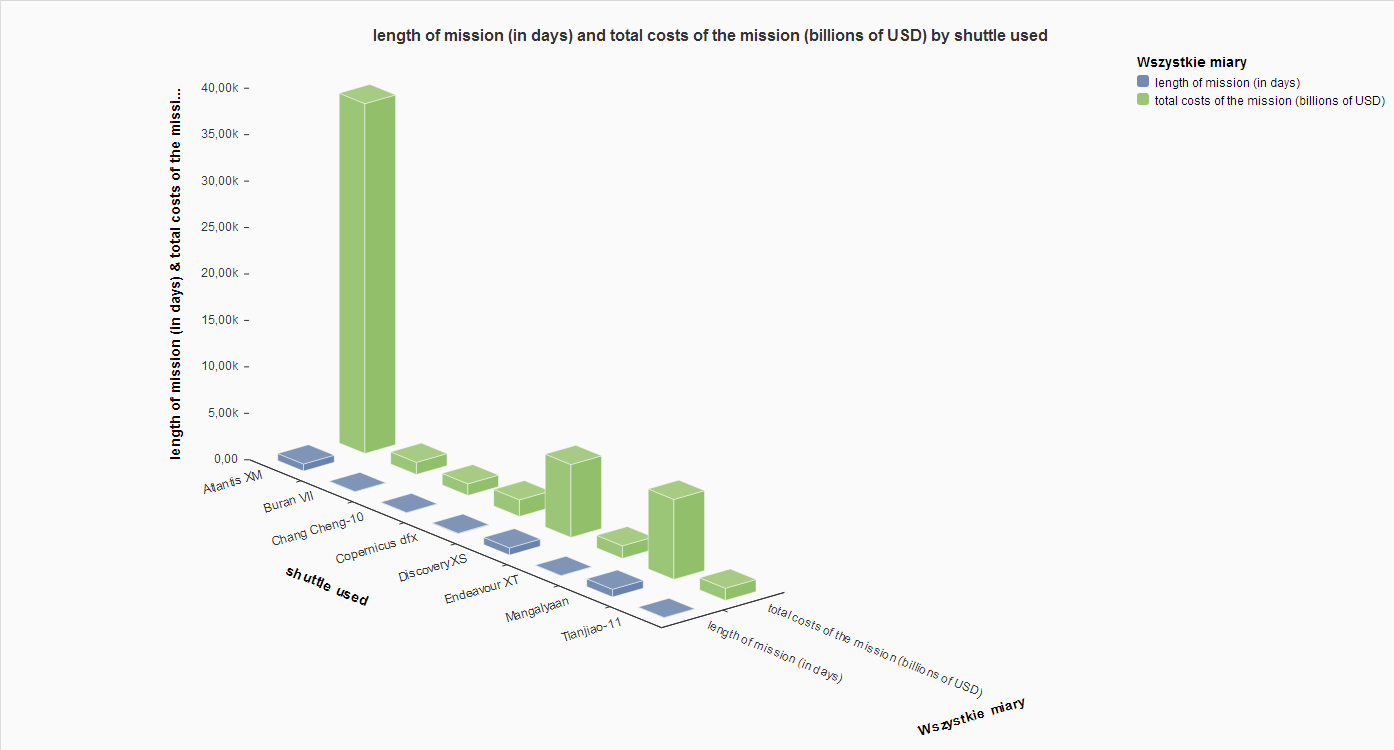 The data used in this chart 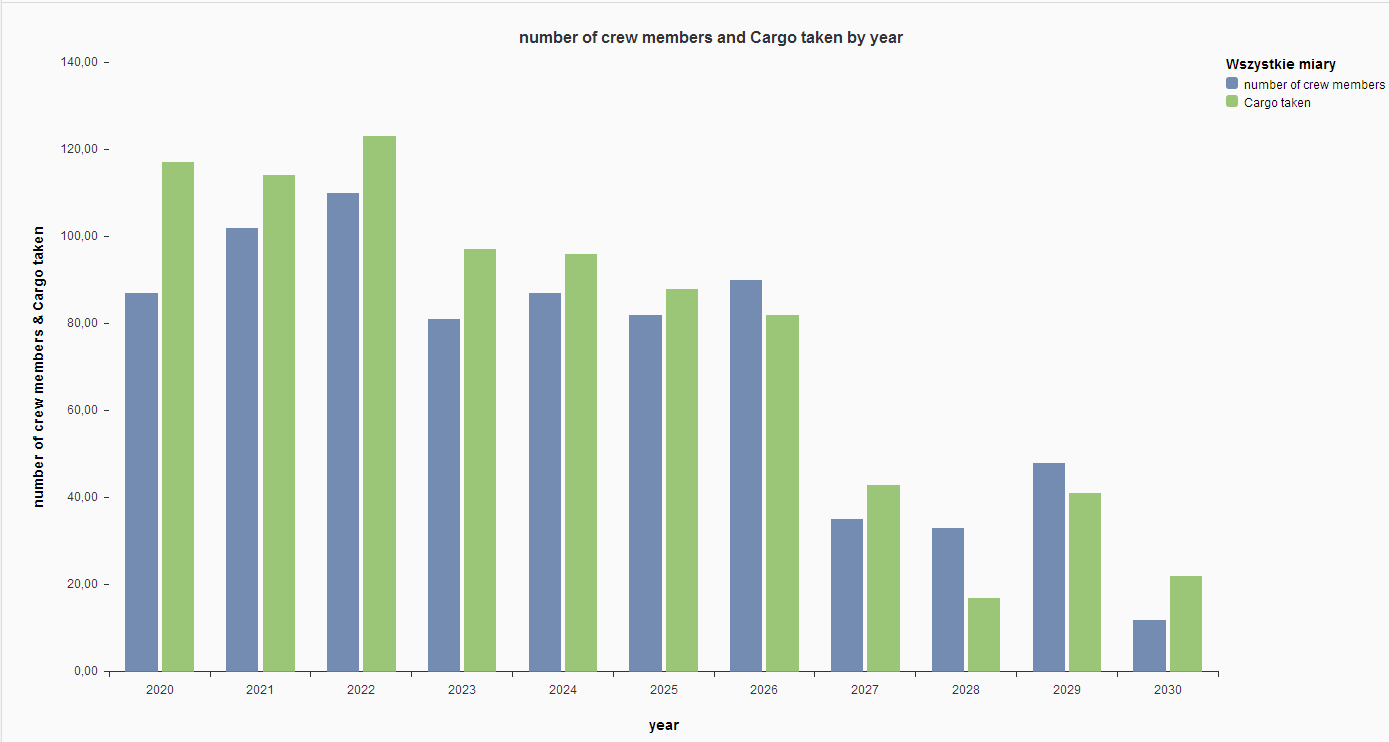 6. Another chart for the same – we see here that someone wanted to see it in an awsome way 😐 ) 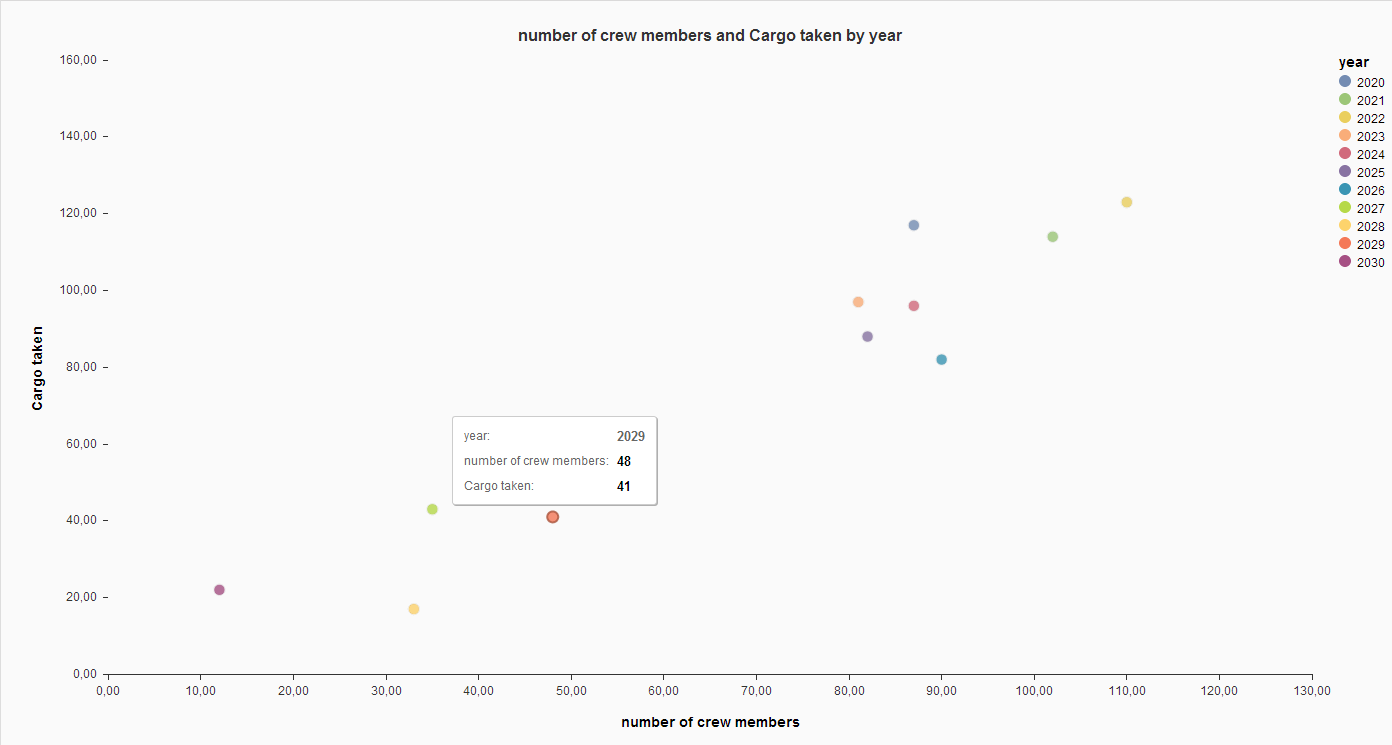 7. Distance and crew members by shuttle

Not always long distance means large numer of crew. Discovery XS takes the most austronauts. While Mangalyaan takes only part of it – it seems they use technology rather than austronauts. 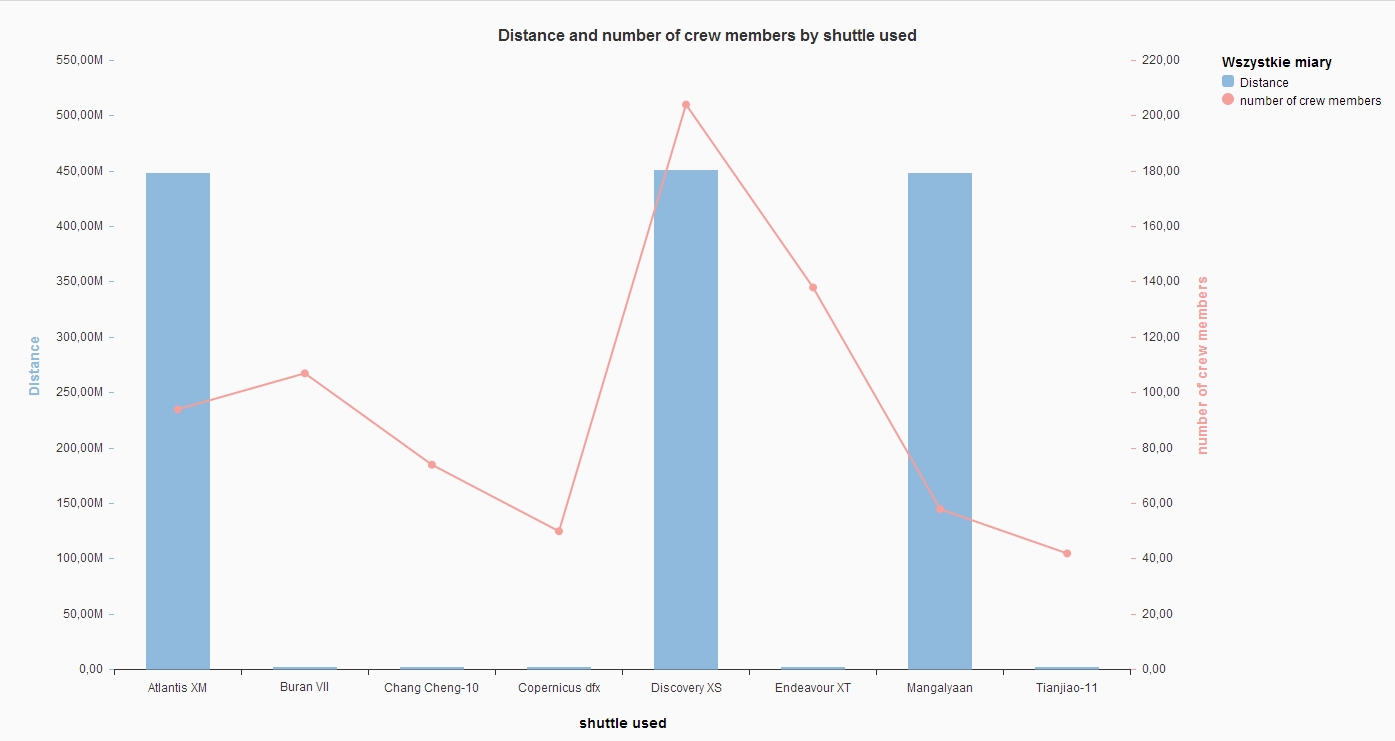 8. Number of crew members by shuttle used and mission destination

Here we see the largest numer of austronauts took part in the missions to The moon. 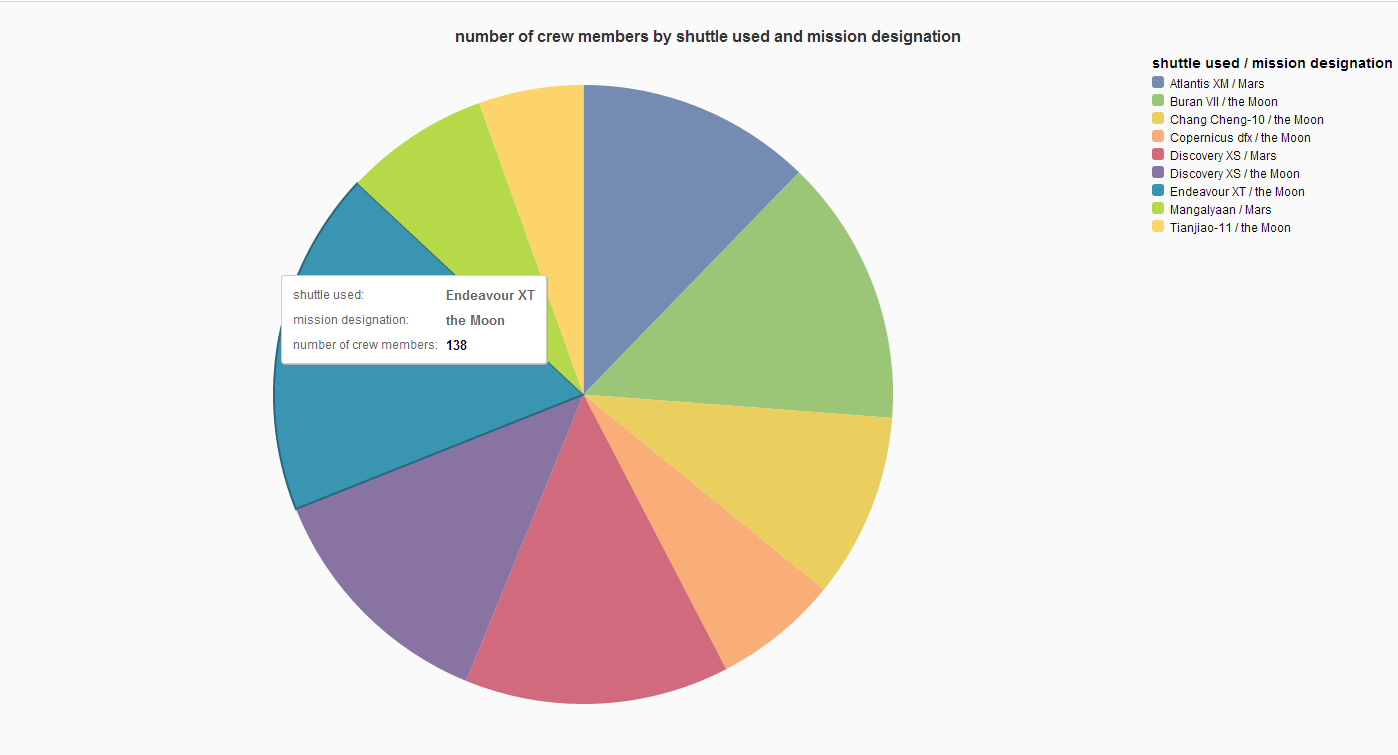 9. Total cost of the mission and numer of crew members

Apparently numer of crew members is not connected with total cost of the mission. See Atlantis XM and Discovery XS. 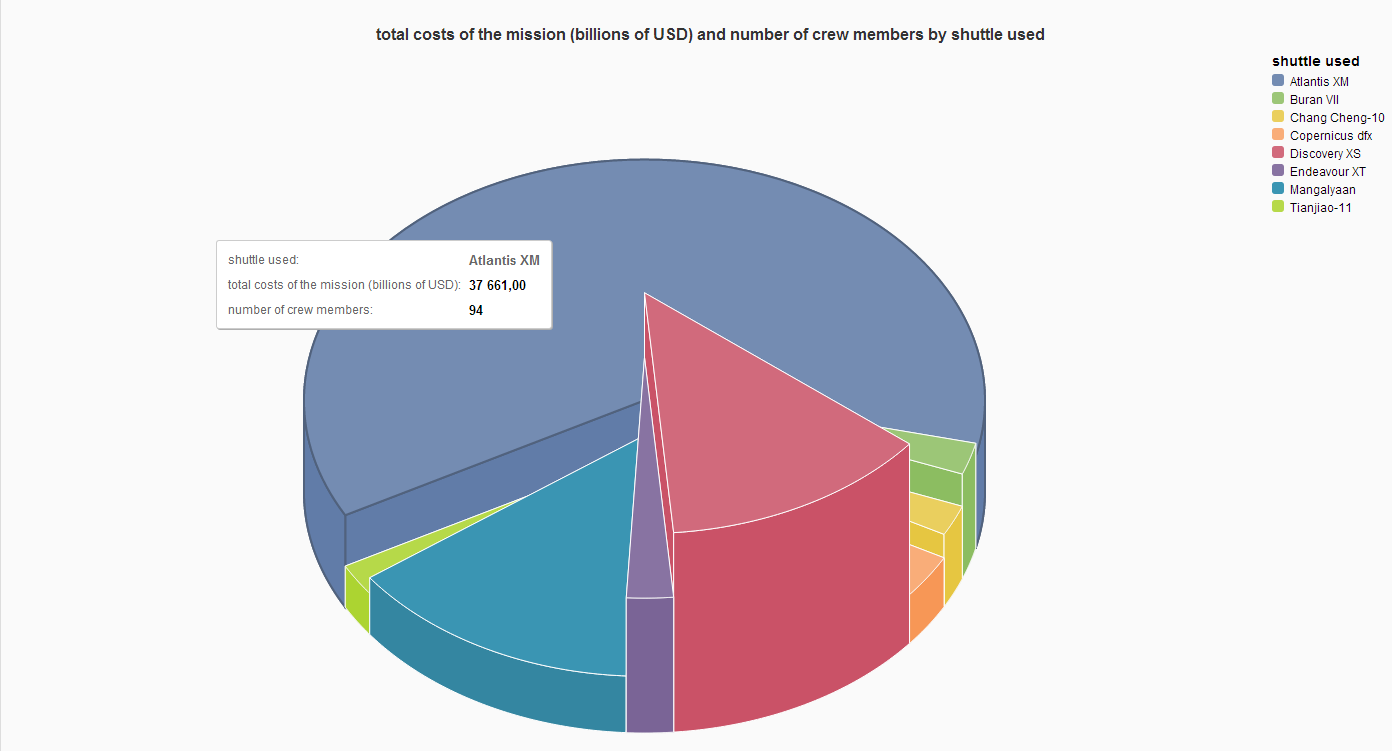 10. Total cost of the missions and numer of crew member by space center and shuttle used.

We see here that figure are biggest in Kennedy Space Center. 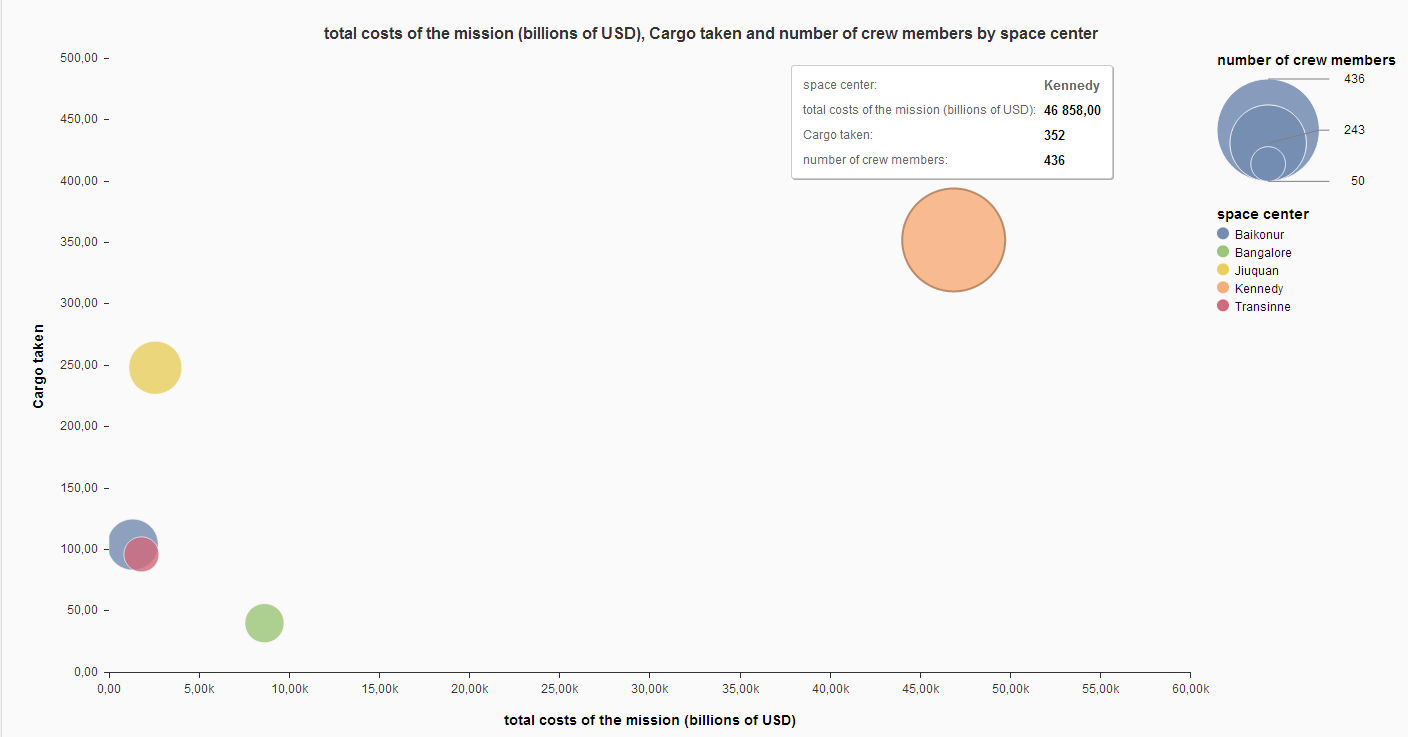 The data for this chart

12. Funnel chart ranking numer of the crews by space shuttle.

The largest number of crew was taken in Discovey XS. 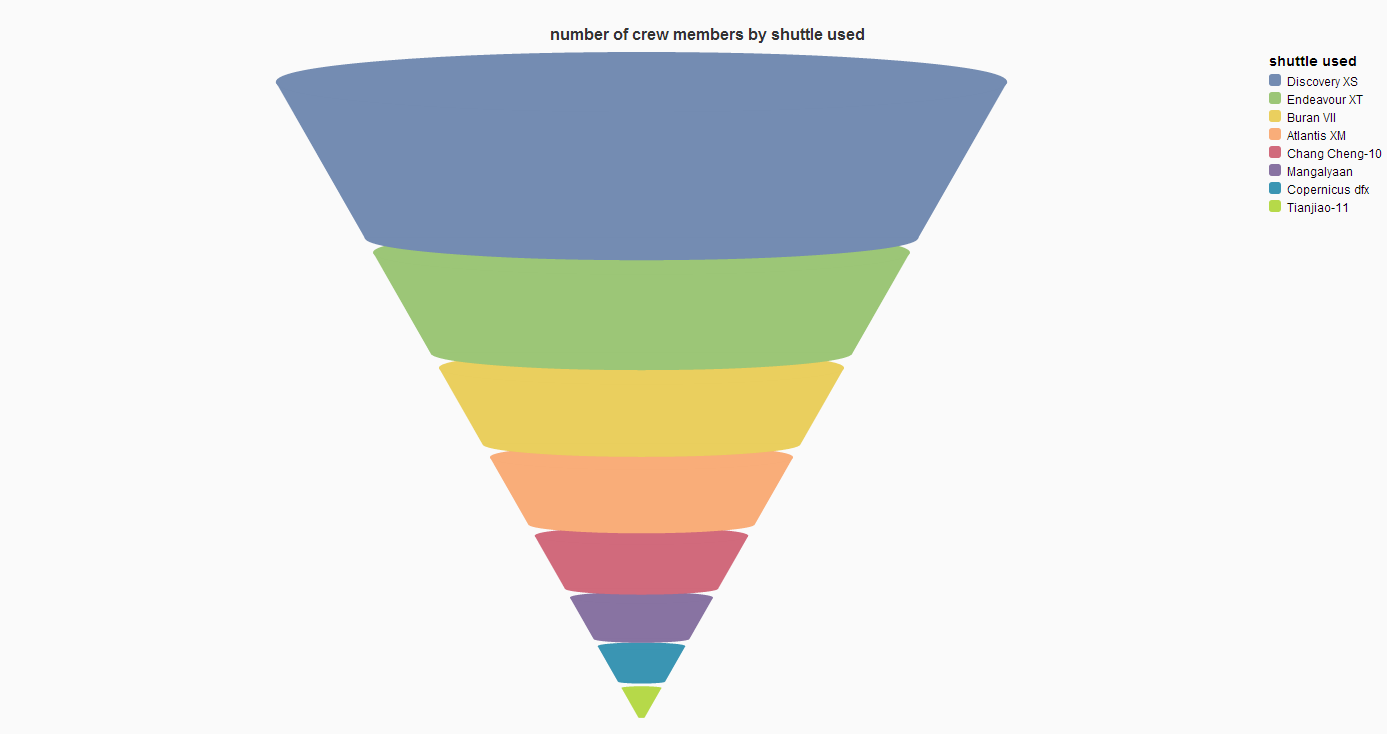 13. The total cost of missions by country in geografical chart 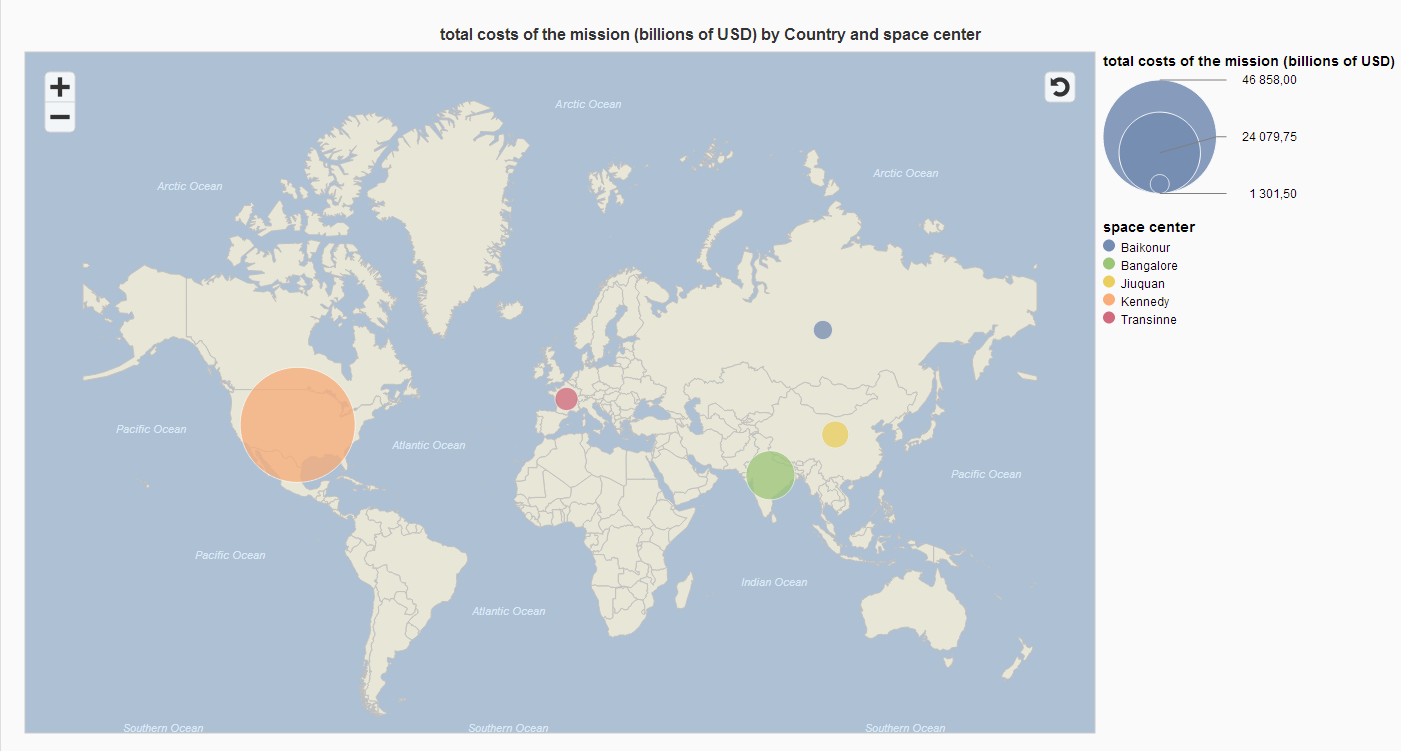 14. The amount of cargo taken by country 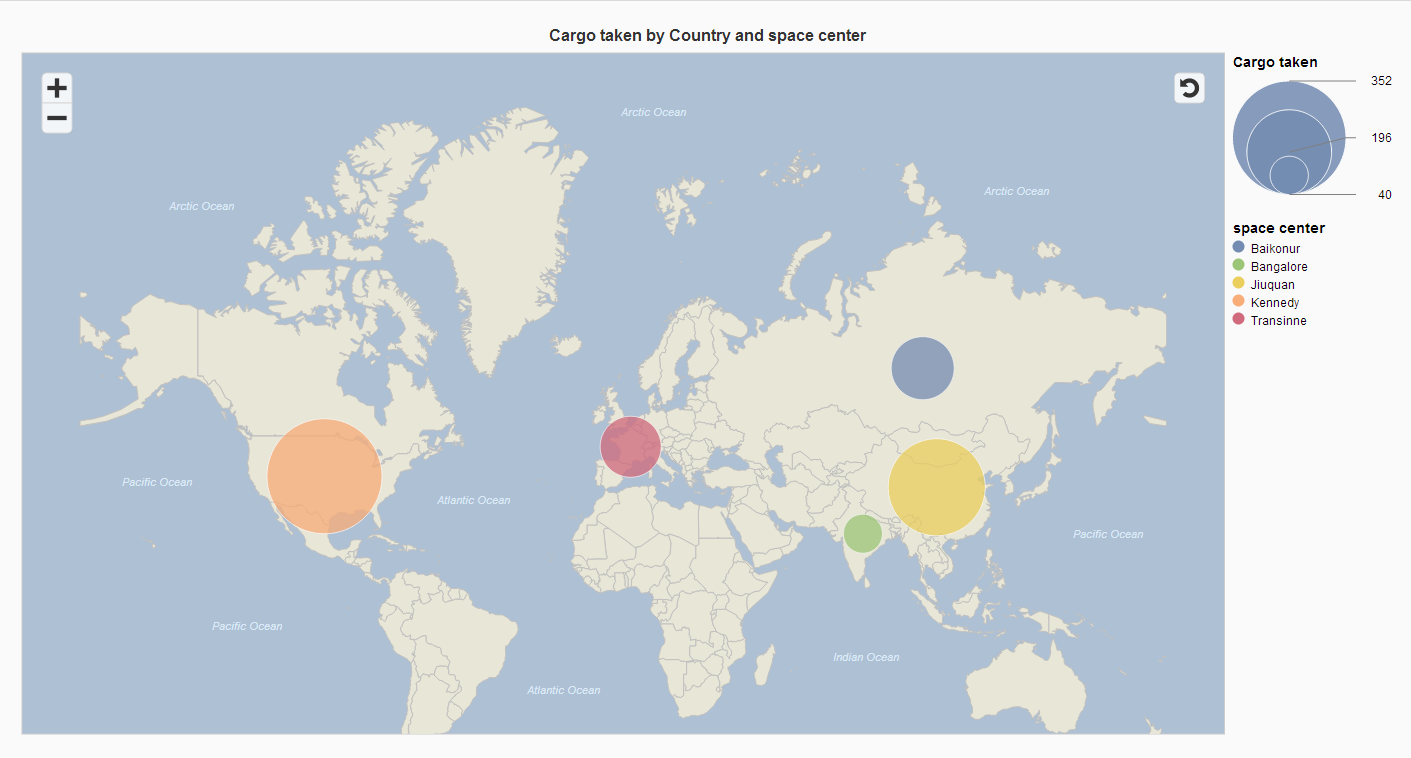 15. The distance covered by space shuttles by country 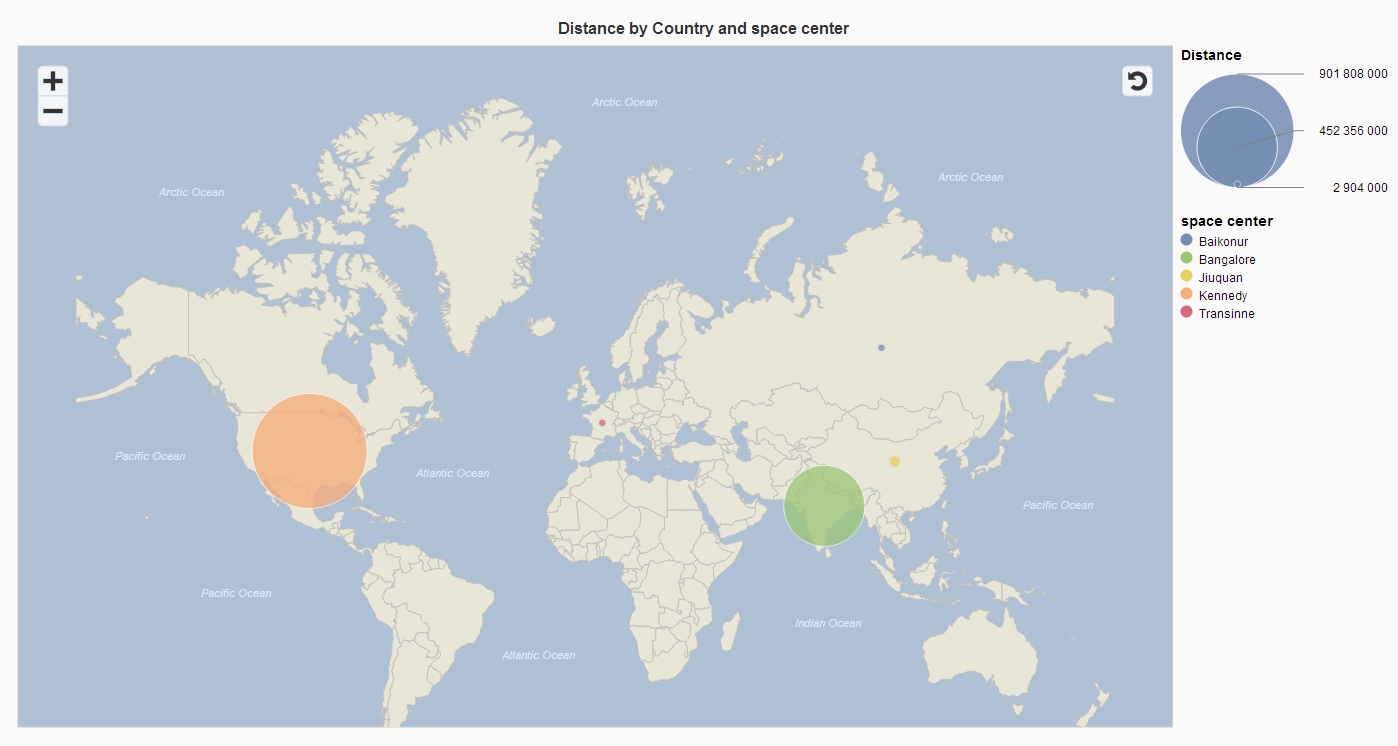 The data for geographical charts displayed above looks like this

At that point our trip to the future ends.

Thank you for reading. I hope you enjoyed watching the charts.

While creating this I found SAP Lumira to be a very friendly environment. Working with Lumira consists of simply uploading the data and creating visualizations. I’m sure that even those who knows little about database theory and mechanics of visualizations’ creation can do beautifull presentations in this environment in a very short time.