Handling of Applications with the BRF+ API (Part 1)

Many questions and descriptions here in SCN focus on the usage of the BRF+ via the workbench as interface for the creation and maintenance of objects of the BRF+. But there is also another way to get these things done namely the BRF+ API. This blog shall introduce you into some basic usage scenarios of the API. A comprehensive description of the API can be found in the book BRFplus – The Book of Carsten Ziegler and Thomas Albrecht.

The first question that might arise up to now is: Why should I use an API if I have the comfort of the BRF+ workbench with its quite usable Webdynpro UI?

The answer is: There are scenarios where the BRF+ workbench cannot be used for the maintenance. One example is the maintenance of the rules on the productive environment when DSM is not in place, In case you are using BRF+ applications of storage type S or C your system settings will usually prevent their maintenance on the productive system. There is a workaround by using an application exit but then you really have to take care on the synchronization process between the development and the productive system as those applications are still part of the regular transport process. This can get quite tricky and is not the best way to go.

Now you might say that a master data application might solve the issue but that one is not intended to be transported except for the XML export and import functionality which might not be the preferred way of your IT operations team. So this might be right time to switch to a generative approach using the BRF+ API. This approach might also be of favor when you want to (deeply) integrate an artefact of the BRF+ (e. g. a decision table) into an existing application so that the user is not even aware of using the BRF+ but on the other hand still being able to use all the nice features of the artefact.

Before the story gets a little bit too theoretical I want to introduce a business scenario where this approach can be used.

Each insured car finally gets one single policy issued with the premium corresponding to the properties of car and the agreement in the fleet master policy e. g. for a car with less than 1.5 tons and a performance of 80 kw you pay a premium of 250 €. Even this simplified description leads us to the point that a decision table might be a very good choice to tackle the scenario. But here come the problems:

So a possible the solution for that scenario consists of two tasks:

Before starting with the technical details just a short disclaimer: the usage of the API for the maintenance of the BRF+ objects is some quite advanced topic so if you decide to use it you should know what you are doing (which is in most cases a quite good approach 🙂 ). Especially when you are integrating the functionality into an existing application you have to be careful e. g. about the commit handling, the transaction handling etc. of the application and the BRF+ API and the interplay between them. Also intensive testing of the integrated components plays an important role.

In addition the coding snippets shown below do not have a sophisticated error handling so for a real usage some adoptions have to be made.

But now enough for that part and let us start with the real stuff … the coding with the BRF+ API!

In order to make the decision table available for the enhanced UI of the master policy management we will implement a handler class ZCL_BRFPLUSAPI_FLEET for the single operations that have to be triggered via the BRF+ API. This means that as a rough guide we have the following methods for the:

In order to create the decision table we first have to create a BRF+ application. We will use an application of type master data for the example as this is the obvious storage. For the task we design one method that creates the application including its sub-objects and returns a reference to it:

Within that method we first fetch a reference to the BRF+ factory which is the central point when creating BRF+ objects:

As already shown we then delegate to a method that creates the application with its basic features and returns the reference to it. The method contains the following logic (the numbers refer to the highlighted sections in the following screenshot): 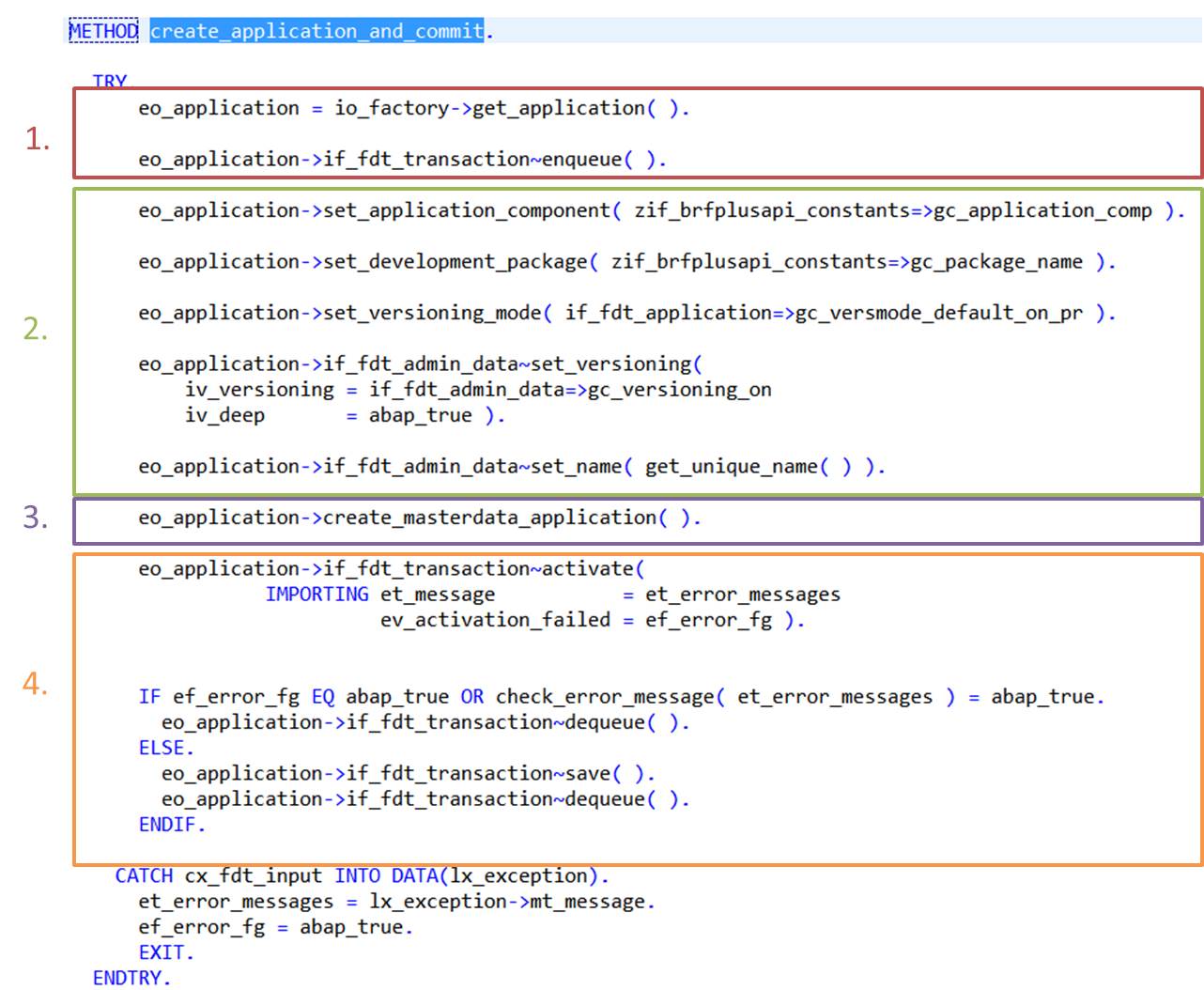 Some remarks on this first task:

Now let us go back to the main method for the creation operation. Next we want to create the decision table in order to have it in place when we create the function and assign it as top-level expression. But before we can do so we need to get access to the data objects used in the decision table i. e. their references that we have stored in the S-application for reuse:

Within this method we once again use the BRF+ factory to fetch the references to these objects: 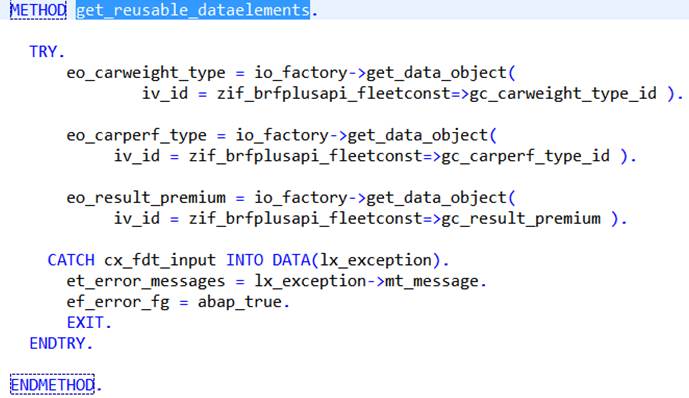 If you know the IDs of the data elements (that I stored as constants in an interface) the reference is just one call of GET_DATA_OBJECT away. Having these references we have access to all the attributes of the data objects e. g. their type. 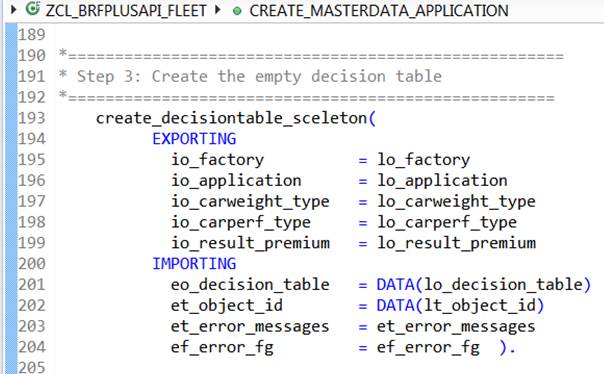 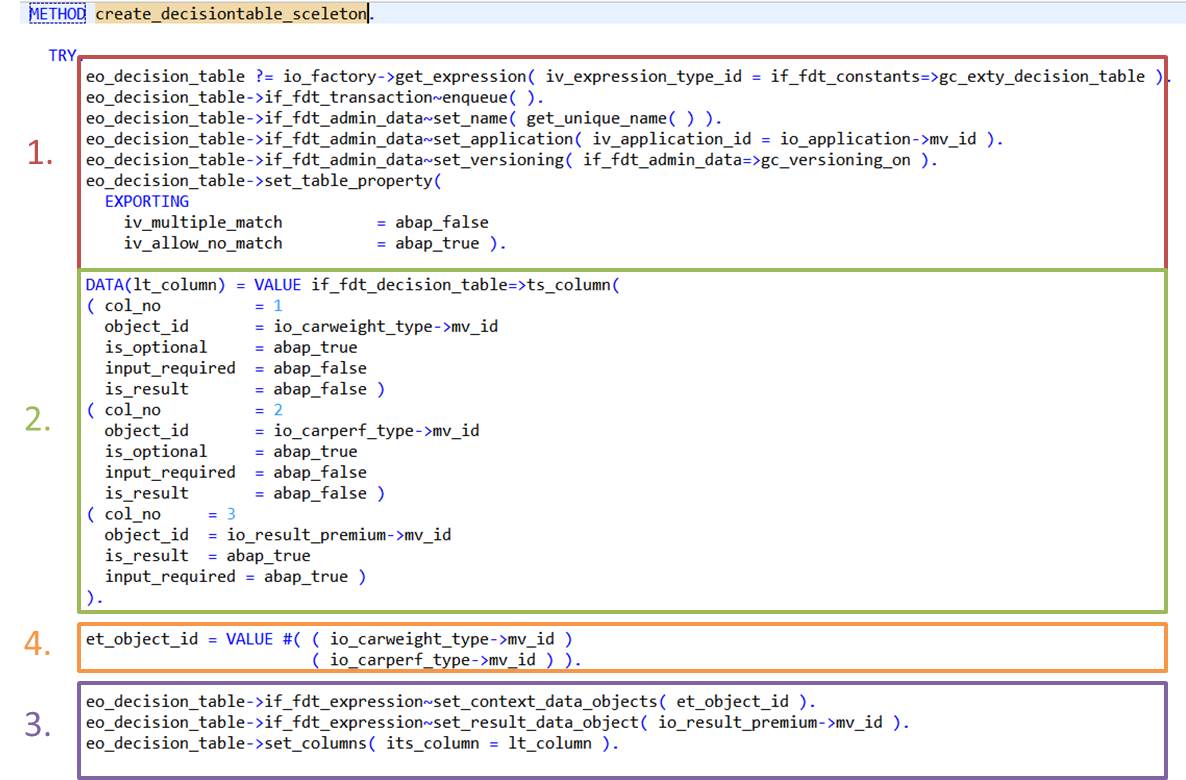 As you can see we did not yet activate and save the object.

Now we have the references to the application object, the (empty) decision table object and the data objects. We can therefore finish the creation operation by creating a function and activating the function andits sub-objects: 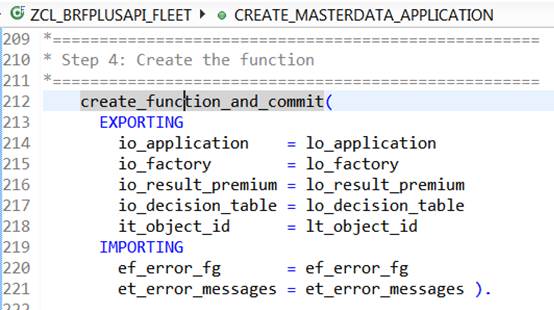 The key take-aways of this first section are:

Setting and Getting the Data 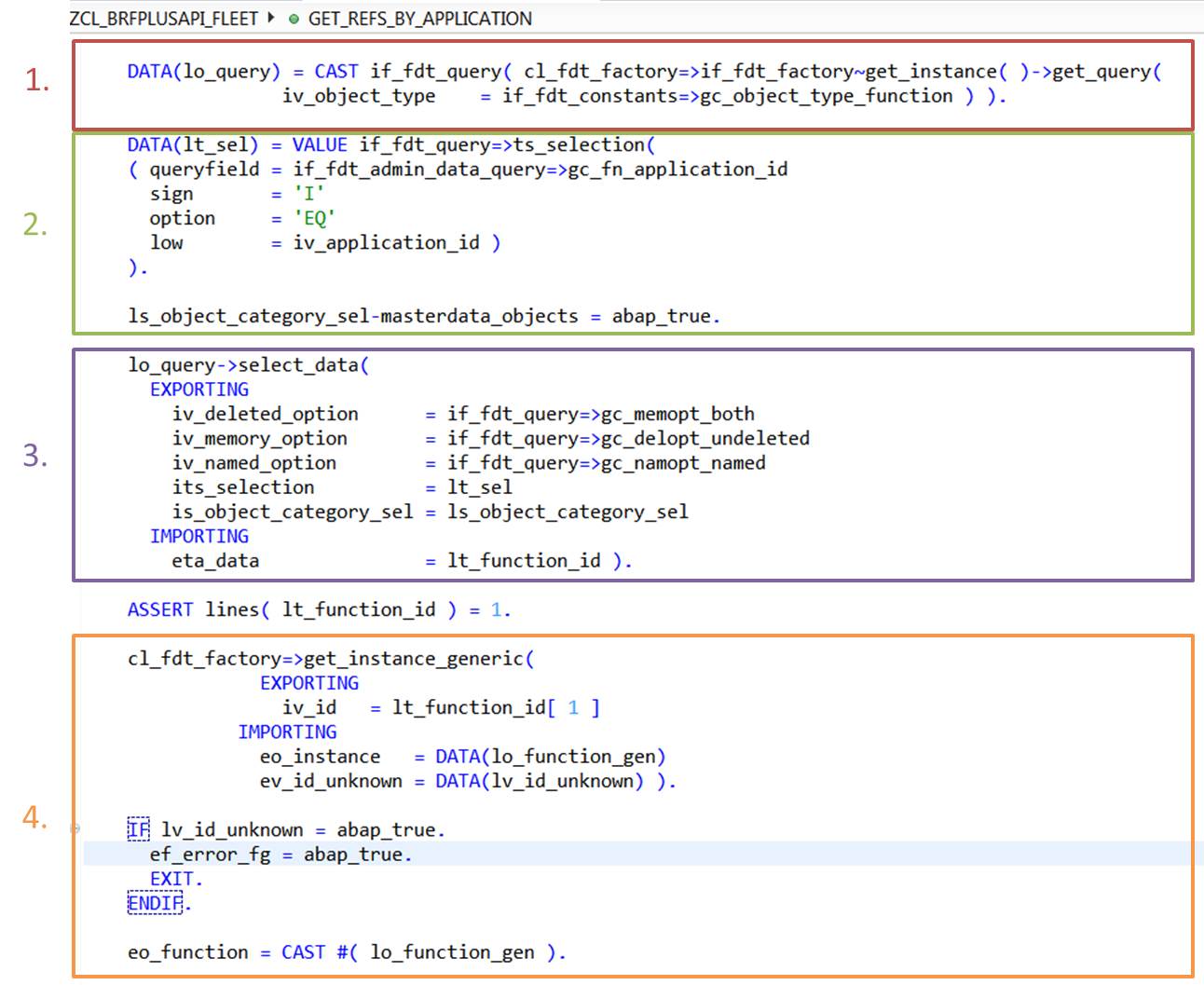 The implementation of the GET method is straightforward as we call the corresponding GET method of the decision table API:

The SET method is nearly as straightforward as the GET method so we call the SET method of the API but as we make a change to the table we have to enqueue/dequeue as well as activate and save the object in analogy to the case of its initial creation: 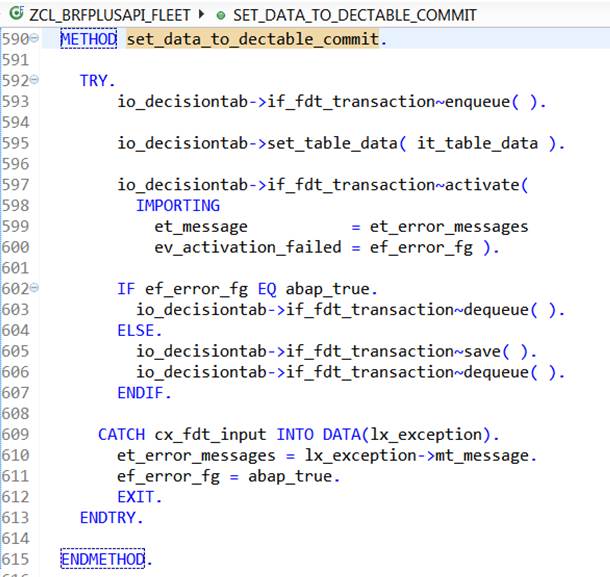 As you can see the setting and getting of the data itself is not difficult but it is certainly also of interest what the table data has to look like in order to be able to call these two methods.

The following coding snippet gives you some insight how this can be achieved:

First we create a reference to our handler class and fetch the reference to the decision table object (the application ID is a parameter of the report). 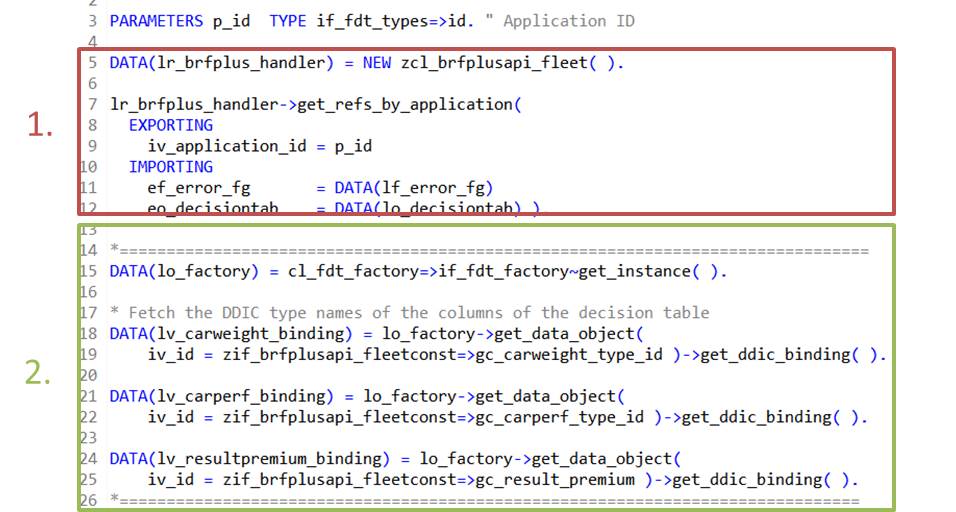 Then we fill the table parameters with the values for the condition columns where we specify the table column and row the operators for the comparison and the concrete value: After that we fill the result column which is more straightforward due to the direct assignment of the result value without options for comparisons:

This way we have to fill the table line by line and finally set it into our decision table using the handler class:

The key take-aways of this second section are:

Within this blog a scenario was presented which is an example for the usage of the BRF+ API to create and maintain BRF+ objects. We created an application, a function and an empty decision table in storage type “master data”. Then we determined the ways how to fetch the reference to the created objects via the ID of the BRF+ application and how to set/get data to/from the decision table object.

As there are several more functionalities that you can address via the BRF+ API that might be of interest and are listed in the function list of the handler above a further blog is available that describes e. g. the API to check for gaps and overlaps in the decision table: Handling of Applications with the BRF+ API (Part 2)

I just want to point out that the BRFplus book was co-authored by Carsten Ziegler and Thomas Albrecht. Especially Thomas wrote the chapter on the API. So we should not forget to mention him here.

Thanks Wolfgang for the corrective advice on that. I corrected the corresponding sentence.

Thanks for this blog.

Please can you help me to understand the correct approach on below reuirements.

i want to maintain certain combination of IF condition in BRF+ Application which will be called dynamically in ABAP .

then i will not change my ABAP code it should be handle thorugh our BRF+ application.

Any Help on this will be Appreciated.

I am not quite sure if I understand you correctly: you want to have one "generic" piece of ABAP that mainly models an IF condition with the single conditions linked by an AND.

I have several questions on that:

Many Thanks for quick reply , in this application i have created one decision table where i will maintain  field and values which will be called in ABAP for checking the condiitons.

and also chris can you help me to maintain the unique data in BRF+ decision table where it should not allow for duplicate entries .

this does not exactly answer my question. If you use the BRFplus API in order to add a new field you have to change the ABAP coding in order to add the new field. The same is valid for the call of the corresponding BRFplus function.

Non-duplicate entries within one single field cannot be checked using standard BRFplus functionality. You can do a check for overlaps of conditions for the complete decieion table

P.S. It would be appreciated if you post your questions as general questions in the Business Rule Mangement Space as they do not directly rely to the blog. This will also help others to find ansers to similiar questions much easier. Thanks

sorry for confusion , I got your question .

we will be maintaining fields also in decision table for eg.

if we have to check below condition in our program then,we will maintain LWA_T001 in one field  and 0500 in one field and like this we will be maintaining all if combination in multiple rows.

when we will retrieve the data together it will be string and same we will match.

is this answer to your question.

and can we avoid the duplicate entries using exit class.

if yes plz can you send me some example to achieve the functionality.

Yes I will post my question in Open Forum.

sorry I have no example for this check for duplicate entries at hand.

Regarding the below link,