The fashion weeks in New York, London, Milan and Paris are the most prominent industry events in the world, allowing brands and designers to show buyers, media and general public (shows are often streamed online) the latest trends and tell the world what’s going to be in and out for the next season.

The fashion weeks held in September showcase the clothes that we will see being sold in store for Spring/Summer 2015 (SS15), and carry all the glitz, glamour and after-parties you might expect from shows of this nature.

SAP used social analytics to track the conversations going on in social media and fashion blogs, keeping a critical eye on what happened, compiling our conclusions in five reports. Here’s just a small sample of the insights we took away from the ‘big four’ fashion weeks in September.

Social comparison of the four cities 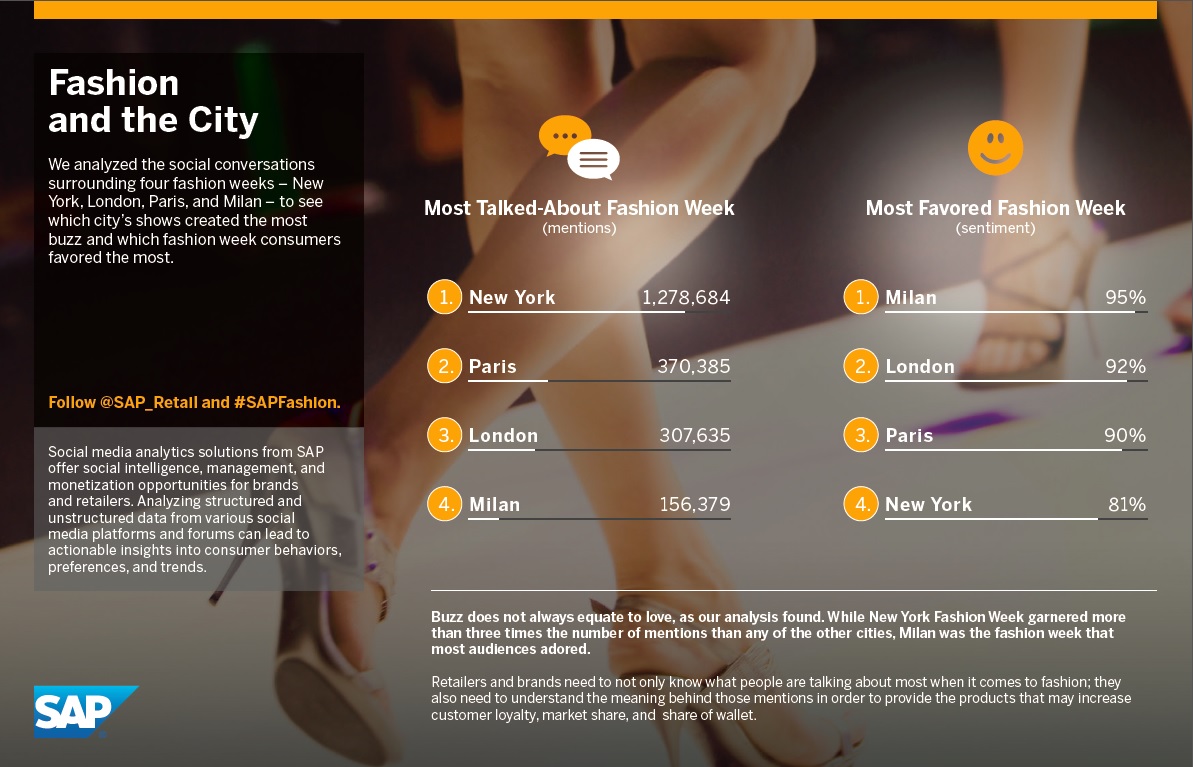 Of the four events, New York was by far the most talked about fashion week. American brands were particularly active in social engagement.   The data, collected and analysed by SAP from each of the fashion weeks, indicated that digital marketing is becoming a huge factor for the fashion industry.

In Twitter, city #hashtags were at the top of the #hashtag list. As well as being the four most popular, city #hashtags #nyfw, #pfw, #lfw and #mfw were in the same order as the cities came in social conversation.  In addition, American brands had the highest number of #hashtags. For instance, #marcjacobs was the most popular hashtag across the four cities. This was followed by #oscardelarenta.

For Twitter handles, it was a very different matter. London was dominant on social. @Burberry and @Topshop were the two most popular handles – Burberry was particularly successful with its digital marketing, having additional handles such as @Burberry Prorsum, @Burberry S/S15 and @Burberry #LFW high ranking, according to SAP analytics.  Paris brand handles were also popular. For Twitter mentions, internationally famous @Chanel and @Dior came just after the two London handles. Usually in tweets, the audience referred to these handles directly.  Michael Kors conducted a major digital marketing campaign, constructing a specific New York Fashion Week microsite called All Access Kors, which allowed users to add an event reminder to their calendars and was viewable on desktop, mobile and tablet. It also had an editorial content hub offering content such as live streaming and behind-the-scenes photography.

In contrast, Milan came in fourth for social conversation. Milan is a much more reserved and exclusive affair than the other three events, so it was never going to match in social media chatter.  But Milan was first for sentiment. In terms of the clothing presented, this is the land of classic brands like Armani and Dolce and Gabbana, so there was a lot of positive feedback from shows.

The social media analytics of Milan, more so than the other three cities, was much more likely to reflect the fashion trends of the country. This was because social chatter was much less influenced by digital marketing campaigning and celebrity. The Milan social audience and critics appreciated prints and styling, such as Marni flower print, Armani’s blue and nude sea inspiration, as well as bohemian and 70s styles from the designer Etro. These kind of fashions are very likely to make an appearance next year.  New York had the biggest response from social, but it was fourth for city sentiment. So getting a lot of people talking does not mean that all of it will be positive. 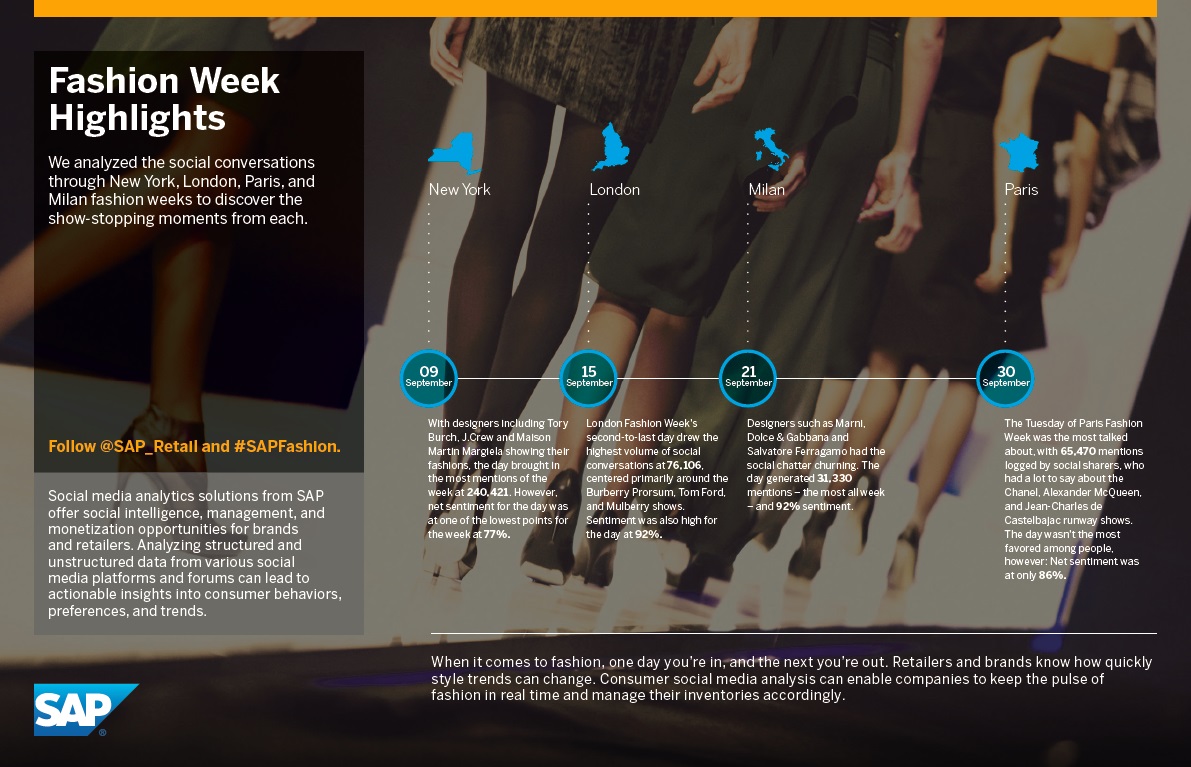 One great benefit of social analytics from platforms like Twitter is the way you can pull out data taken in real-time.  Through analysing the data captured from across social platforms SAP was able to create a timeline for each of the fashion weeks and compare and contrast social conversations day-by-day. Download the five reports.

In New York, Sept. 9 was particularly big on social conversation with the presence of American mass market designers J.Crew and Tory Burch, as well as (expensive) street fashion in the shape of Diesel Black Gold.

In London, it was Sept. 15, which drove major chatter with shows from big hitters like tech-savvy Burberry, as well as Tom Ford, and Mulberry. The 21st was a particularly social day in Milan, with shows by Marni (which critics praised for its flower market fashion presentation and show), as well as Dolce and Gabbana (which had a Spanish themed collection that was also well received). 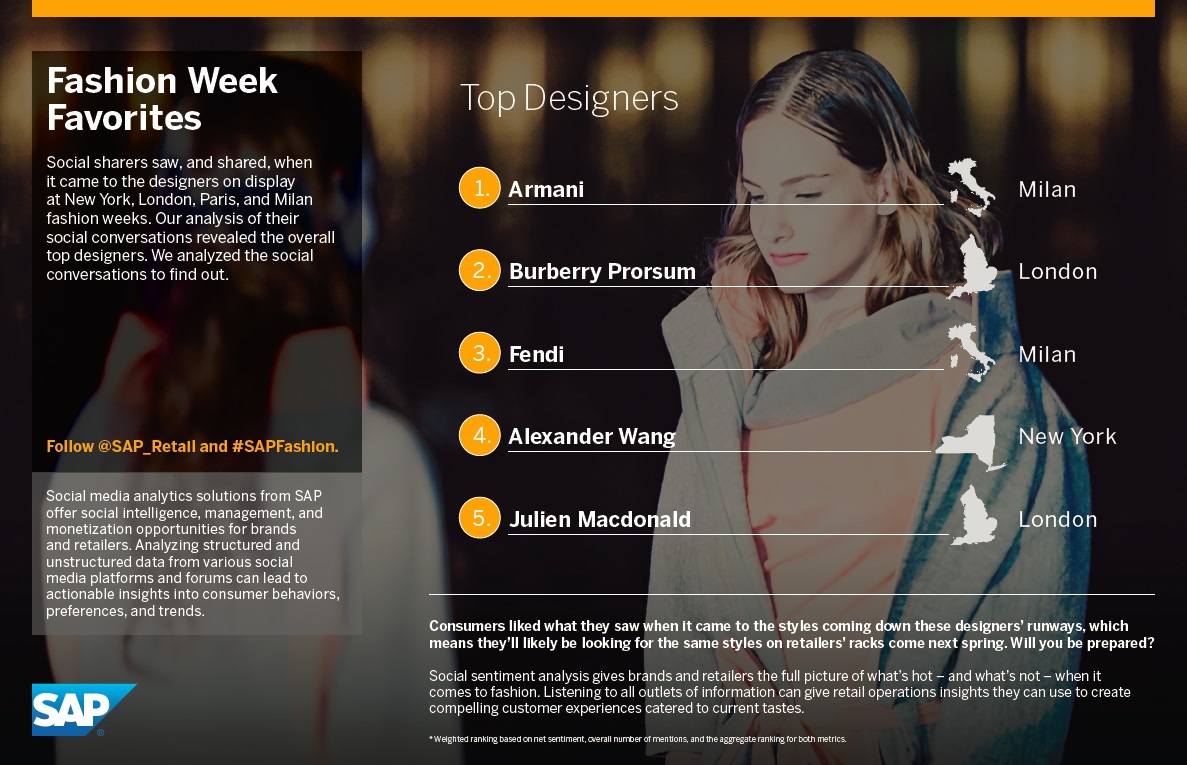 The SAP analytics proved that Armani is still a powerful international brand, ranking as the top designer on social media and with a relative lack of celebrity glitz at its catwalk show. Social media and critics seemed enjoyed Armani’s collection, demonstrating the designer’s timeless ability to remain relevant.

Burberry Prorsum was the second top designer on social media. A respected international brand, Burberry’s popularity this year was also a reflection of more than just the clothes showcased.

Like Michael Kors, Burberry focused on technology to increase its reach. The brand hosted a popular LFW live streaming and tested a Buy Now button on Twitter, where users could purchase items straight from tweets. 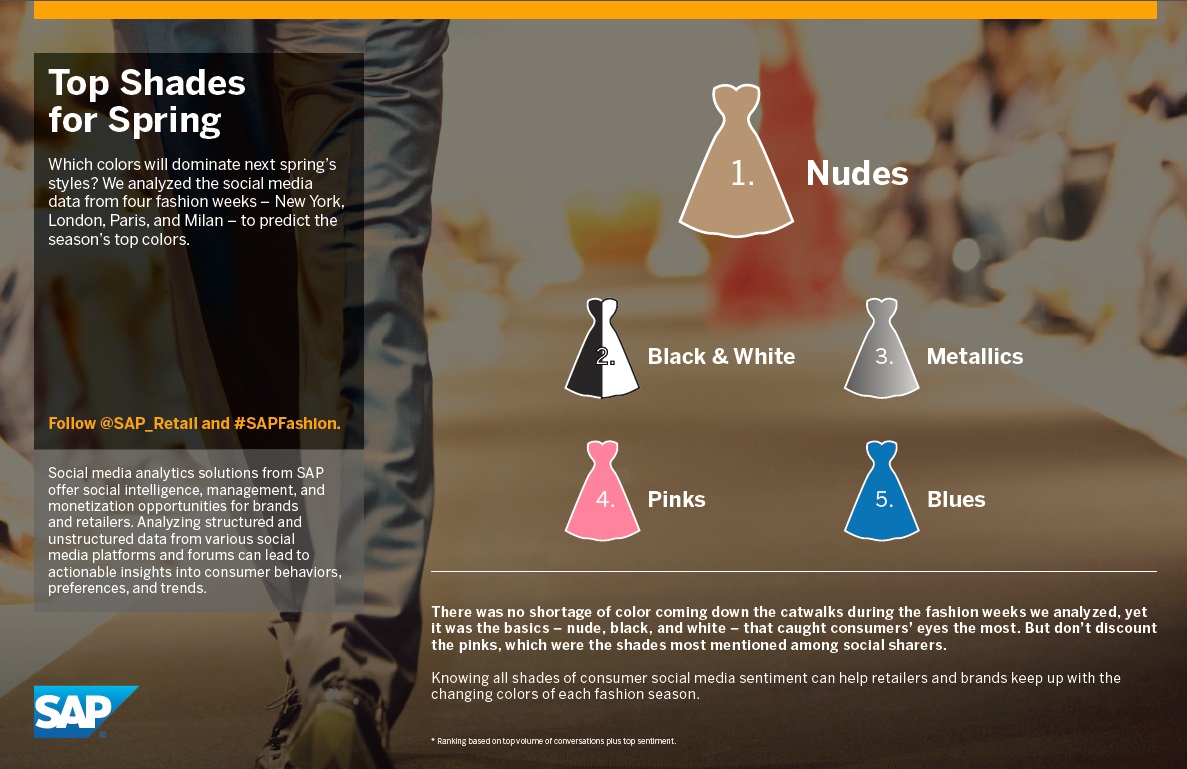 When it comes to the clothing lines retailers will bring out for SS15, they want to choose popular colour trends most in fashion, so the fashion-conscious are more willing to buy.  This is why using social analytics to track popular colours over the international fashion weeks is so relevant.

From the data we collected, nude was the top colour on social media, followed by the black and white combination. In third came metallic, with fourth pinkish and in fifth place blue. These results were collated by taking into account the most loved colours which are indicative of an upcoming fashion trend, as well as the most talked about ones.

Nude, black, white and metallic were always going to be popular colours, but it was interesting to see pinkish as high up as fourth. This may have been partly due to Moschino’s Barbie Girl collection which had a very visible distribution of pink!

Of course jeans and denim are always popular, and is part of the reason blue came in so highly. It could also be partly due to Armani’s popular SS15 collection, which had the sea highlighted in its theme. 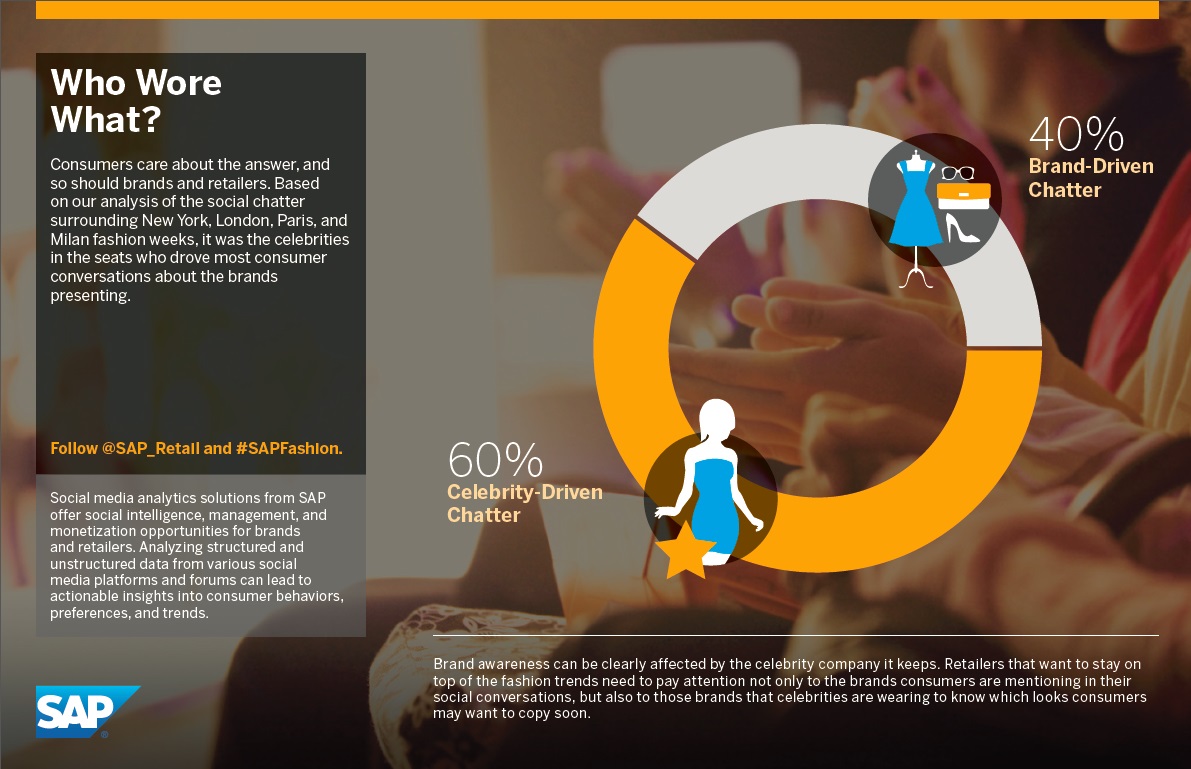 Fashion and celebrity has always had a close relationship, and our analytics proved that, with 60 percent of designers having conversation for their brand influenced by celebrity – or the mention of another famous brand in conjunction.

You have to consider the power of celebrity when it comes to the clothes the stars wear. Shoppers are influenced by famous people and actively imitate their looks – celebrity publications offline and online will often provide information on where you can copy or purchase the clothing pictured on the rich and privileged.

Regardless of who wore it better, our social analysis of the SS15 fashion weeks provides brands and retailers with a picture of what’s hot – and what’s not.  When shoppers run to designer racks next spring, retailers will know how to stock the most effective inventory while providing customer experiences that meet the expectations of their changing tastes.

Styles that struck a pose on the runway may not necessarily resonate with consumers, as the social chatter around fashion week has identified, and technology is becoming as big a factor as the models and clothes. Digital is the way fashion brands and retailers can quickly connect with customers, and we’ve seen a number of companies embrace it and take risks, often with positive results.

The majority of customers and fans will not attend any of the fashion weeks, so digital marketing initiatives such as live streaming and social media successfully build closer relationships between the designer, retailer and customer. Download the full reports.

Do we have a analytics tool for such data analysis?