The day two keynote at SAP’s TechEd && d-code conference in Las Vegas was literally out of this world. 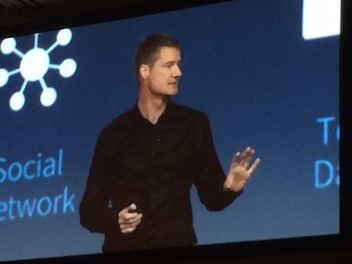 Bjorn Goerke (pictured), head of products and innovation technology for SAP, channeled his inner sci-fi geek in front of thousands of developers, engineers and technologists to underscore the fact that the impossible is always possible – especially in the ever-changing world of IT.

Goerke said he’s always been inspired by the vivid imaginations of iconic sci-fi authors like Isaac Asimov, Robert Heinlen and Arthur C. Clarke. “Even before man set foot on the moon they were already astonishingly accurate about how space travel would work,” said Goerke.

Clarke in particular, was typically spot on with his tech predictions (satellite tv, personal “transceivers”) and formulated three laws that still hold up to this day:

“At SAP we are too venturing into innovative ideas not thought possible,” said Goerke who reminded the audience that SAP has been turning outrageous ideas into realistic innovations that continue to help businesses around the world run simple. For example:

“Today, we are going one step further in the business networks,” said Goerke. “It was always about co-innovating with you our customers and partners. I am thrilled to be at TechEd this year to figure out with you how this will work.”

Goerke warned that digital disruption is making it harder for businesses to compete, one reason why it makes sense to tap the power of business networks. Uber, for instance, is taking out taxi business. Air BnB is disrupting the hospitality industry. In fact, since 2000, 52% of the Fortune 500 are now off the list. “That’s how fast the digital revolution changes markets,” said Goerke. “The whole world is hyperconnected.”

Ariba, SAP’s business network of 1.6 million customers transacts over $100 billion  – more than Amazon and eBay combined. These types of established networks create challenges and opportunities. Technology, software in particular, can be an enabler to address these challenges. “Developers, you are the new king makers,” said Goerke. “A simple approach to getting things done is the right way forward.”

“With SAP HANA, we have the opportunity to place all data in one spot and process all of these data points very quickly,” he said. “We can understand what happened in the past and predict what will happen in the future.”

Goerke announced the next iteration of SAP HANA would be ready by end of November.

To showcase the incredible speed and drill-down capabilities of SAP HANA, Goerke introduced Drs Pieter den Hamer of Netherlands-based gas and electric company Alliander, an SAP HANA customer. Pieter said his company’s #1 priority is to maintain the integrity of the pipe infrastructure. His demo showed SAP HANA in action, as he entered a variety of different maintenance queries into the system. Two years ago, under Alliander’s prior process without the aid of SAP HANA, queries typically took 3.5 hours to complete, totally “unacceptable” according to Pieter, especially when dealing with emergencies. With SAP HANA, most queries, some of which might involve data dealing with 28,000 different pipes takes under four seconds to process and schedule for maintenance execution.

With more than 4,100 customers, 1,700 startups and 3,000 partners using SAP HANA, Goerke challenged the audience to also get on board with SAP HANA.

“What are you waiting for?,” asked Goerke. “Start the journey and come with us. We are providing the one platform to offer non disruptive innovation.”