What if the Quarterback isn’t your Quintessential back? The Impact of a Consistent and Reliable QB

As we near the midway point in the NFL regular season, there has been a variety of surprising stories thus far.  This past weekend was no exception.  From the unfortunate injuries and surprising win/loss records, to the unlikely fantasy studs and duds, this season has without a doubt captivated us all.

Although each season has its unique characteristics and storylines, one thing remains constant.  In order to be successful, your team needs a quarterback that is above average – a true top quartile performer compared to his peers.  Being an Industry Value Advisor at SAP, if I had to benchmark every single championship winning quarterback from the beginning of time, I would say well over 90% of those Super Bowl winning quarterbacks were deemed top quartile performers from a statistical standpoint.  Of course, American football is a team game, and it’s important to have productive players at every position, however having that reliable player who is the focal point of your offense is imperative to getting your team to the next level.

So what is the single most important position in football?  Yes, you guessed it – the quarterback – the quintessential back in my eyes.  The quarterback is the only position player to touch the ball on every single down.  From calling audibles at the line of scrimmage to something as trivial as handling the snap properly, there are many critical factors that are at times overlooked by most fans.  Having proper footwork when taking your drop, feeling the rush and adjusting your position in the pocket, anticipating your receivers’ routes, and delivering the ball with pace and touch are some other examples that highlight a quarterback’s giant responsibility.  I may be biased being a former one myself (albeit at a MUCH lower level competitively speaking), but I know firsthand just how difficult and important the position is to a team’s success.

As important a QB is to his individual team’s success, a QB is just as important to a fantasy owner’s success.  Millions of fans come together and participate in fantasy football each and every year.  There’s not only pride on the line, but at times, money – big money.  Fantasy football is big business.  To ensure you’re giving yourself every opportunity to win your matchup each and every week, SAP has developed a Player Comparison Tool in collaboration with the NFL.  With this tool, you are able to forecast player performance based on different criteria – performance, matchup, consistency, upside, and intangibles. 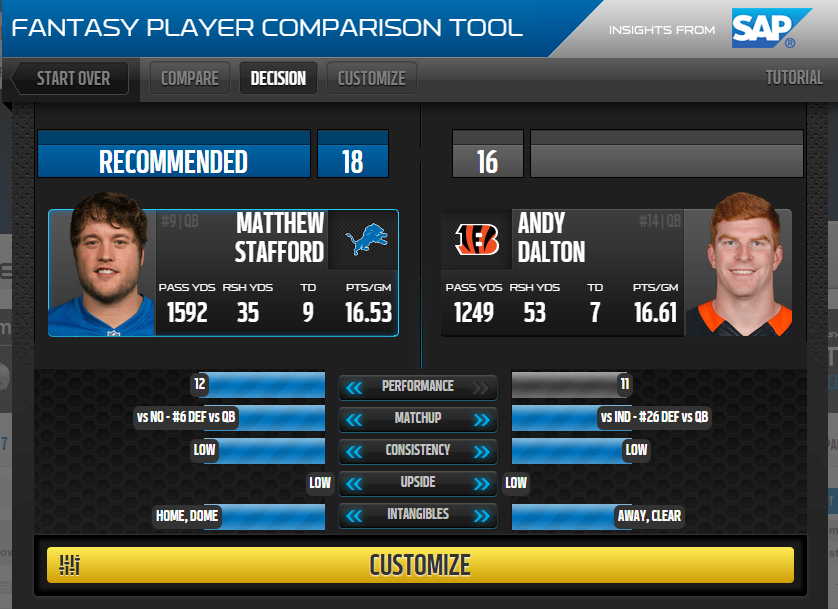 As you can see, the tool takes it to the next level.  Above is a screen shot of a comparison of my two QBs prior to their games this past Sunday.  The tool recommended Matthew Stafford by a close margin, and the tool’s recommendation was validated.  Stafford ended up scoring 11 more points than Dalton this past weekend.

In addition to being easy to use, the tool allows you to perform scenario / “what-if” analysis by placing more emphasis / weight on certain criteria.  After customizing the criteria, the tool will instantly give you its recommendation and help you make the right decision.  Making the right decision when it comes to which quarterback to start could be the difference in a win or loss given the potential amount of points QBs put up.  Indecision can lead to poor decisions.  Poor decisions can lead to losses.  Losses can lead to missing your fantasy league’s post-season and your pride and money going down the drain.  In a structured and sage way, the Player Comparison Tool helps eliminate uncertainty and instill the confidence you need to make the right decision at the right time.

Be sure to check out the Player Comparison Tool yourself on NFL.com to help set your lineup for Week 8.

Good luck the rest of the way.