The EBOLA disaster: 3 things that your business can learn from its mismanagement

The current outbreak of #Ebola is its most severe since its discovery in 1976, exceeding the sum of all previously identified cases. #WHO just announced that there could be 10,000 new cases of Ebola per week, and the death rate in the current Ebola outbreak has increased to 70%. What was imagined to be a problem of West Africa has now gone global with 17 cases being treated in Europe and America, and 4 of them resulting in a fatality. The International President of Médecins Sans Frontières (#MSF), the largest NGO working in the affected regions, said “Six months into the worst Ebola epidemic in history, the world is losing the battle to contain it.”

How did we allow this to get out of hand? Similar sentiments were expressed during the 2008 financial crisis too. It looks like its ‘Yesterday Once More’. Remember that song from The Carpenters!

To start with, none expected this to blow up into such an unmanageable scale. In the aftermath, the response of the international community has been appalling, to say the least. There is no Ebola cure available yet. Vaccines which could help combat similar situations are in various phases of development still. The lack of a revenue incentive for the large Pharma companies to go after was a big deterrent. West Africa is amongst the most poorest of nations! But now with Europe and US reeling under the Ebola scare, all of them are working at breakneck speed to get this to the market first.

While a concerted effort to contain this has just begun, the question that businesses need to ask themselves is what they could learn from this experience. 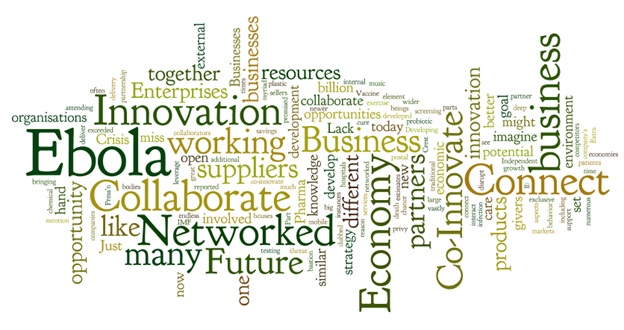 1. Lack of Collaboration: If one were to look at this closely, there were numerous players involved in this whole exercise. Starting with the care givers, volunteers, NGOs, Government departments, international bodies like UN, WHO and IMF, donor agencies, developed economies and also the Pharma companies. The glaring fact is that there was complete lack of collaboration between them. Simple aspects like protective gear including gloves, body suits, protective tapes, body bags, disinfectants and research equipment, were in short supply. Given the volatile nature of the disease to spread easily, this was also preventing many more aid workers stepping in. This was available across the world, but there was no visibility into the supply chain, resulting in the disease reaching epidemic proportions, that we are contending with today.

Do businesses encounter such challenges? All the time, some would say! Just imagine how much potential savings and business advantages are missed when organisations lose out on the opportunity to collaborate with their suppliers, partners, influencers and in some cases customers too. Imagine the lost opportunity to develop new products and bring them to market effectively.

Networks like #Ariba, #Alibaba, #Amazon and #eBay provide businesses with a platform to interact and engage with a wider community of sellers and buyers across the globe. Businesses need to leverage the power of such networks to partner better with its ecosystem. Sage Health Solutions in South Africa is a great example of how businesses can leverage the power of a business network to partner better with its ecosystem and ‘Collaborate without boundaries’.

2. Missed opportunities for Co–Innovation: Developing a vaccine was the most crucial element for success here. Vaccine development today is the bastion of a few large Pharma giants, some of whom actually have one in development for similar type of viruses and which could address the issue here. Independent researchers have been working on this since 1976. Health workers and care givers who have been attending to these patients and could share knowledge on the symptoms and infection behavior. There were many with deep and profound knowledge on Ebola. Lack of leadership in being able to bring them together to jointly develop with promised returns could have helped reduce the testing phase, and we might have had a vaccine on the ground before now.

Businesses are so often caught up in their myriad working complexes, and internal egos. Innovation becomes an exclusive club in organisations, which only few are privy to. More importantly they miss out on the opportunity to look at the vast ecosystem, including their suppliers and other potential partners.

Until 2001, less than 10% of Procter & Gamble’ new products involved external innovation partners. It set a goal to increase this ‘Collaborative Innovation’ to more than 50%. By 2008, it had exceeded that goal, and its external partnering strategy – Connect and Develop – had become a fundamental part of its business. The reason for its success was that P&G was open to any kind of partnership – Individual inventors to launch Crest Spinbrush; chemical suppliers to develop Olay Regenerist creams; university spinouts on a line of probiotic supplements; and even with competitors like Clorox on the Glad Press’n Seal plastic wrap. Today, P&G delivers US$3 billion toward its annual sales growth through this network of outside collaborators. The Networked Economy is about bringing together people, businesses and new opportunities!

3. Looking at the big picture: When the first case of an Ebola death in the US was reported, many countries switched into a panic mode. Extra screening at airports, isolation wards in hospitals, additional resources and resulting costs due to all of these, not to mention the economic impact which the World Bank estimates at $32.6 billion. Just imagine if all of us had got together, pledged support, money and resources, there was a better chance that this could have been limited and a working cure available in hand by now!

How many times we have seen this happen in business. Classic examples like Kodak in photography, Nokia in mobile, book publishing houses, music labels, print media, postal services… the list is endless. Quite many of these instances could have been vastly different, if they had been open to look beyond their traditional environment. This could have simply been a different set of suppliers working on newer technologies; different partners who were disrupting the status quo; or innovation in service delivery.

The business environment we live in today is an extremely challenging one, very similar to the Ebola threat – economic uncertainties, geo-political conflicts in many parts of the globe, depleting natural resources combined with aspects like globalization leading to increased interdependence among companies and newer business models emerging every other day. On the other hand technology innovation is making the world a smaller place. There are more connected devices than human beings, which are opening new routes to market. Companies like #Airbnb #Uber are leveraging this ability to connect people and business, to create new business opportunities. This is truly the networked economy.

Businesses today have a great opportunity to connect, collaborate and co-innovate. If they do not, they could end up facing the ‘Ebola’ in their business very soon!

#FOLLOW the conversation on the #Networkedeconomy and the #FutureofBiz here!

You put things in a positive manner here.

But ask me, if I was a company producing vaccines and drugs, I would have wanted Ebola to spread and reach a point when all are scared of it. Then I can sell my vaccine at the price I put/ i can sell large volume and churn up big profit.

if i was in any other busness, And loss to my  business, only if it spreads to my market. and my market is asia, europe or america, and never Africa.

Thats the fact and reality in business, which is really Bad

Jobi - Thanks for the comment. Here's my view on this. Incidents like these provide an organization to gain 'exponential success'. Companies spend millions on activities like CSR, Sustainability etc. Those investments could best be utilized here. The amount of goodwill that they could generate is tremendous. Apart from this, they have an opportunity to work together with Govts., such favours could easily be traded for financial incentives in different ways - Tax exemptions, entry into new markets, access to research, academia etc. In the entire process an opportunity to establish themselves as thought leaders, community leaders, engage with a wider audience. There might be new business opportunities that opens up! This is why I used the term exponential success. You may not win profits in one go, but what you achieve in small portions on a continuous basis, will far outweigh the one time benefit. Call it the 'Network Effect'.

Hi suresh, You are absolutely correct. If atall the decision makers of a company have such social commitment and insight.  Companies have CSR. then I donno if any company would take up a huge investment project as part of CSR, and again the decision making is always by the individuals - the CEO, MD and the CFO. So thats how it goes..

Just for an example, cholera is a disease which kills 1000 around the world every year. At present there are no good vaccines available for it even though some are available, they are not been prescribed efficeiently. The simple reason is the target market and the ROI. Dont forget the H2N thing few yrs back. The vaccine business is not that simple, its a very big Game.

This is just for argument sake. Anyways your views are good. 🙂