It’s a cold mid-December night in “Krzyzewskiville,” a makeshift city outside of 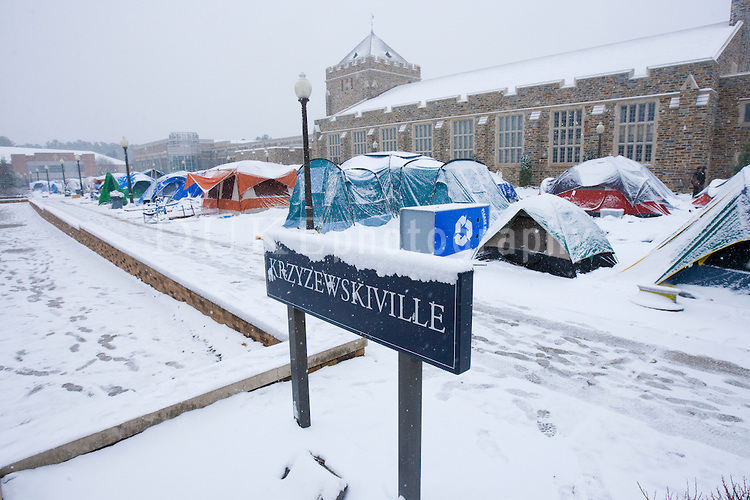 Cameron Indoor Stadium – the home of Duke’s Blue Devils. And while the much anticipated basketball game doesn’t start for another month, Krzyzewskiville is full of the “Cameron Crazies.” You see, for students, tickets to the game don’t exist; their rite of passage is earned by “tenting,” where legions of blue-faced fanatics unite.

Tent order determines stadium seating and up to 12 people can stay in a tent. Duke Student Government regulates tenting and there must be a certain number of students in the tent during regular, periodic checks. They freeze together, snooze together, attempt to study together, and occasionally eat pizza together… supplied by the legend himself, Coach “K” – who has also been known to hold open forum “team meetings” before games.

The team buys into the fans just as much as the fans buy into the team, and every time they win at home, the impact of the crowd is a trending topic, often verbalized by the players during post-game interviews with the media. Everlasting passion is something that doesn’t go unnoticed at Duke, and now the die-hard fans of Duke are in for a real treat…

“We always have and always will look to be a leader in the digital space because that’s what our student athletes and fans deserve,” said Ryan Craig, director of digital media for Duke athletics. “We’re looking forward to providing the greater Duke community with the ability to engage in our history and tradition like never before.”

And what a rich history it is, having won 4 NCAA championships and appeared in 10 championship games, along with 15 final fours. Duke Athletics is taking men’s college basketball data to the next level by launching one of the most intuitive data visualization tools in college sports history. 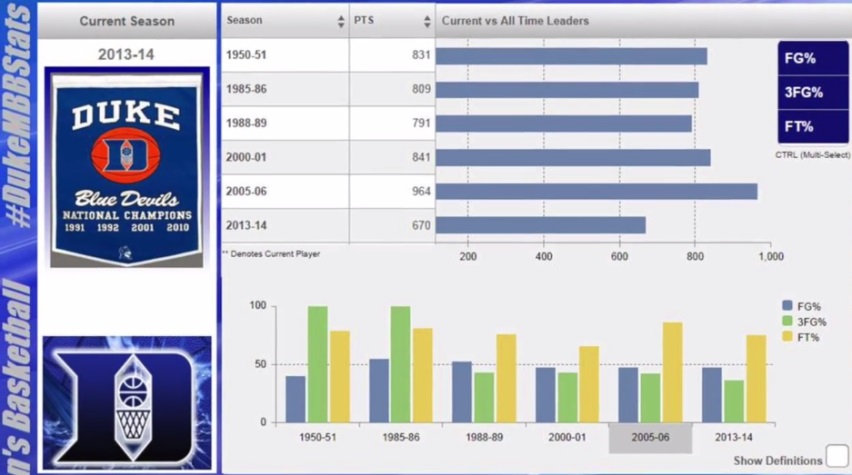 Designed “by Duke Fans, for Duke Fans” – MBA students at Duke University’s Fuqua School of Business, teamed up with SAP and NTT Data to design the tool that allows interaction with the team’s historical record books. The powerful in-memory computing capabilities of the SAP HANA platform provide almost instant access to decades of Duke basketball tradition dating all the way back to the 1930’s.

“With the power of SAP HANA, Blue Devil Basketball fans, alumni, players, coaches, and the sports media will now have ubiquitous access to this information and become more knowledgeable in this storied team and university,” said Frank Wheeler, global vice president and head of business development for SAP media, sports, and entertainment.

By the start of the season and armed with influential team data, the Cameron Crazies can debate the best Duke players and teams of all time with confidence – and hope that a heated discussion will keep them warm as they prepare to witness history in the making during those cold winter nights at Krzyzewskiville. The student team that drove the project explains their vision in this video.

Want the ultimate Slam Dunk? Connect with me @airsomers and on LinkedIn for more on Sports & Technology