What If All Your Fantasy Analysis Needs Were In One Website?

Well sports fans we are in week six of the NFL season. Fall has finally dawned upon us and this is the thick of the NFL season. Teams need to start the season on a roll; offenses need to gel. Defenses need to work together to force turnovers and limit opponent’s offensive output. After five games, my beloved Eagles are 4-1. Many, if not all, of their games this year, have been won by the defense creating turnovers and special teams. The past two games (weeks 5 and 6), special teams and defense have scored 35 points, including 14 against the Rams. This just enforces that teams cannot gloss over the special teams, as with an even matchup, special teams can win or lose the game for your team. This is the same story with fantasy football.

Leading up to this week, my team was 1-3 and on a two-game losing streak. It would be easy for me to pack it in and coast. You are the coach of your fantasy squad and in these situations, you need to tell your team and yourself to calm down and take it one week at a time. The NFL and fantasy seasons are both long and championships are won in part by making skilled and strategic roster moves in addition to playing the waiver wire. In my eyes, the goal during the fantasy regular season is winning the division and getting to the playoffs while building a championship caliber squad. Rarely, if ever, is your final team lineup in the playoffs the same as in week 1.

As defending champion of my SAP league, I know the power and importance of playing the waiver wire. When an injury happens or a player outperforms the competition to be first string, you need to be quick to these trends. As mentioned, my team has put up decent point totals thus far, but I was at 1-3. With this miserable record, I was only two games out of first place. I had to make some changes to my lineup if I was to make up ground in the standings, even at this early stage in the season. Enter Cody Parkey, the hometown new favorite kicker. I swapped Cody in for Phil Dawson, the kicker for SF, who with a combination of missed FGs and a stalled offense, wasn’t producing. I also kept an eye out for breakout receivers. In fantasy, it’s not always the sexy name or veteran that delivers. Brian Quick, a third year receiver for the Rams, has been catching at least seven passes for 74 yards or a scoring TD in each game this season. Anyone who follows the NFL knows that the third year of a receiver’s career can be a breakout year. I was able to pick up Brian on the waivers. Both pickups instantly paid off, as Brian was on the receiving end of 2 TDs and 87 yards, for 20.7 points last week against Philly and Cody kicked 28 points the past three games to aid in a win.

Now that the entire back story is complete, let’s move on to week 6. As you can see, I am one game out of tying for the division lead. My team name is In It To Win It, because, well, I’m in it… TO WIN IT.

I stressed earlier the importance of strong special teams, as we’ve seen in Philly, which can make the difference between a 4-1 team and a 1-4 team. This is relatable to NFL.com, which technology, powered by SAP, has brought all new functionality to both its desktop and mobile platforms and can act as a Special Teams to the user, if utilized properly and often. I use both, but will be writing about just some of the many insights available via NFL.com. I am all about stats and insights, as a member of the NA Business Management Office. We deal with turning data into actionable insights on the daily, which is why I can appreciate what SAP has done with the NFL stats & fantasy portals. I am a huge fan of the Advanced bar, which consolidates a fantasy player’s dream of consumable stats in one place. For receivers, targets and percent receptions, for example, can be as telling as fantasy points. I won my SAP league last year with Frank Gore and Reggie Bush, due to their versatility in the receiving game in addition to their rushing duties. The entire Detroit offense has mostly been in shambles this year and there have been three different RB in Detroit that have more rushes in each game than Reggie, outside of one game. But I’m holding on to him now, in my flex position – with a question mark. My lineup looks to be set, with the possible switch in my flex. I’m either sticking with Reggie or subbing in Pierre Garcon or Torrey Smith. I have research to do. 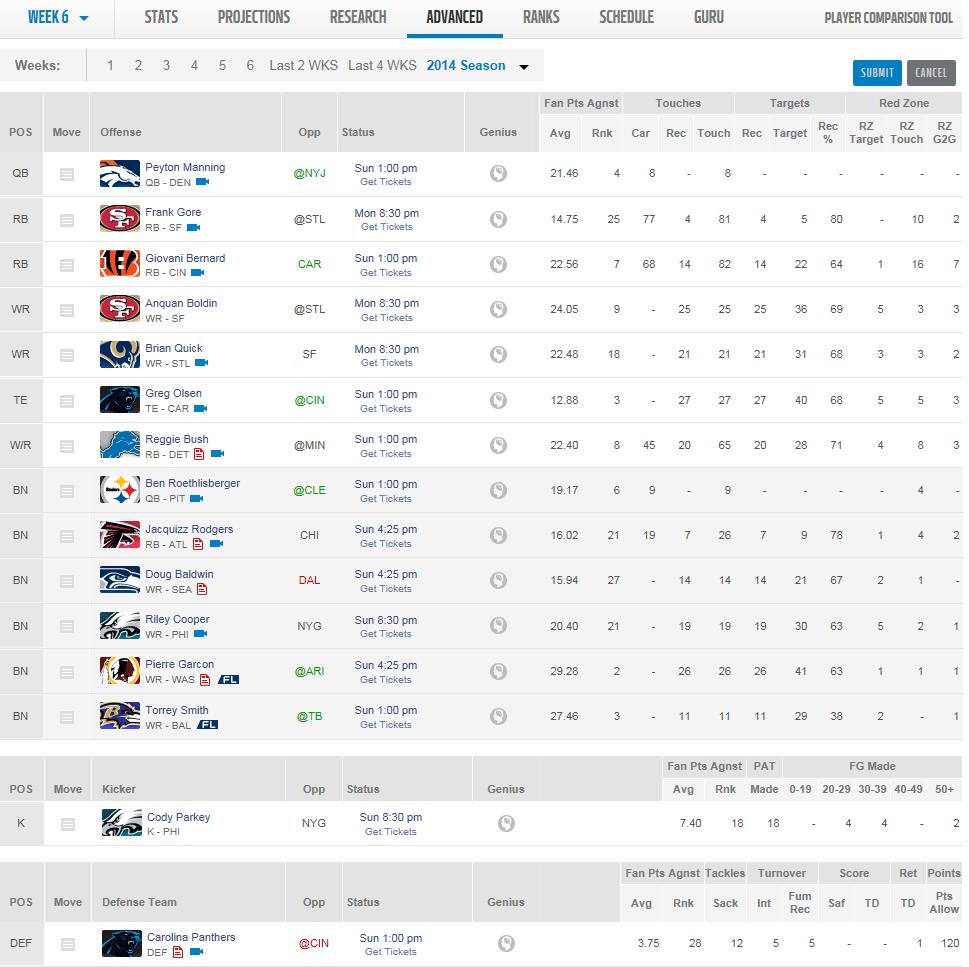 As mentioned, the Detroit offense has not been great this year, outside of Megatron, who currently has an ankle injury. So that is a huge blow toward moving the chains. The backfield is ridiculously cluttered, as Reggie has to contend with three other RBs. It also looks like Joique Bell will be back in week 7 from a concussion suffered in week 5. Reggie unfortunately hurt his ankle against the Bills last week and is awaiting MRI results. All things considered, I would like to avoid him as my flex play – if and only if there is a better option.

So let’s first compare Pierre Garcon and Torrey Smith. Torrey is having a down year, as Steve Smith has come in from Carolina and has had a very productive fantasy season, but stealing Torrey’s targets, as he only has 11 receptions on the year. This is awful. I like his upside and previous year production, so I’m keeping him on my squad for now. Baltimore is in Tampa Bay, who gives up the 3rd most fantasy points to receivers. Pierre is a PPR king, as he had 113 receptions last year with Washington. I thought the addition of Desean Jackson would only help his stats, with Desean attracting double coverage, similar to what happened with Riley Cooper’s production jump last year. Unfortunately, it’s been a combination of bad QB play along with stalled offense, as Pierre has really only had two solid games, with the other three having receiving totals of 12, 28, and 23 yards. Washington is playing in
Arizona this week, who gives up the 2nd most fantasy points to receivers. Let’s turn to the NFL.com Player Comparison Tool for flex guidance. By the way, stats displayed or mentioned come from the analysis on NFL.com. 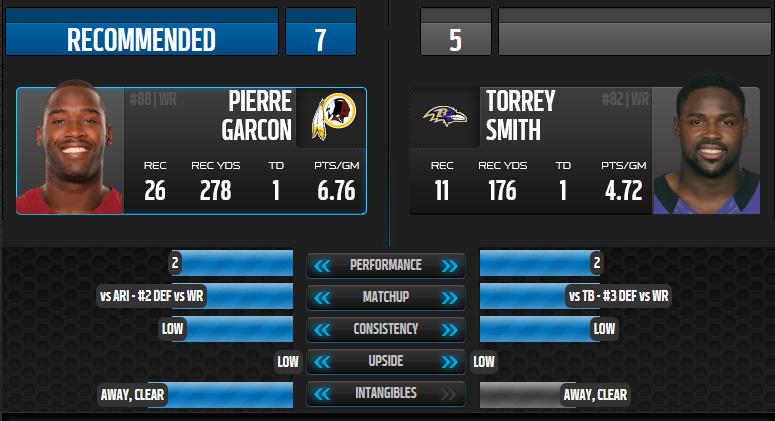 The first matchup has Pierre Garcon as the winner. Pierre gets more targets (8.2 per game, even with a combined 9 targets the past two), has more production on the field, and has the slightly better matchup, so it makes sense he wins this week over Torrey. Now let’s compare Pierre vs. Reggie. This is a tough decision, as the thought was ALWAYS play a starting RB over a WR, but Reggie Bush is in crowded company in Detroit.

Silver lining with Reggie is his receiving output, which he has the 11th most reception yards of RBs with 142 on 20 receptions. He is fourth most among fellow RBs with 28 targets and sixth in red zone targets, so that is a great thing. Despite the crowded backfield for rush touches, Reggie gets a lot of reception targets. I will keep an eye on Reggie’s ankle results as well as team RB returns. If Reggie gets the green light, I’m keeping him in my flex. If not, Pierre is in. 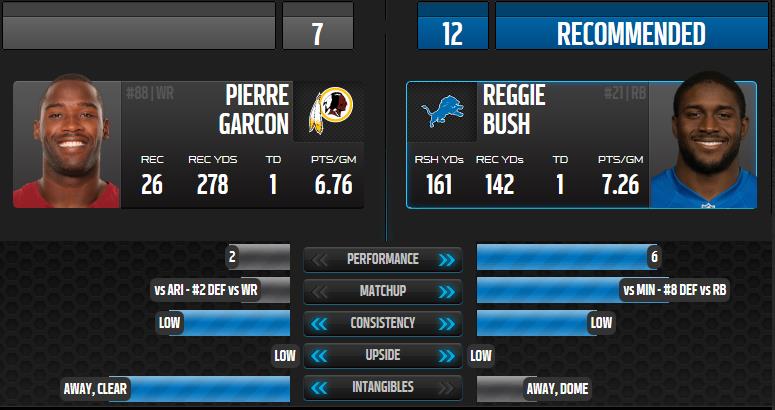 The Player Comparison Tool recommends Reggie, as I would have predicted. The tool agrees with playing starting RB over a WR, as it prefers the RB matchup against the Vikings, who have been awful all year. What is also really cool is you can customize the recommendation analysis against three other analyst choices along with a custom selection.

There are way too many thoughts and analysis that goes into each week to put in a single blog post, but these are some insights into one week of fantasy prep I’ve had this season. Each week could be drastically different. My goal over the next 5 weeks is to be at least one game over 500 and tied or leading my division, preferably with a 2 game cushion. This will push me to the last third of the regular season, where my team will have to keep
that cushion and advance to the post season. I, no doubt, will be using most, if not all, of the insights and tools provided by NFL.com, to my aid.

So the decision was an easy one (at the time) for me, as Reggie Bush was inactive Sunday. I kept my eye on that all week so I was prepared to sub in Pierre Garcon. The good news is my team won.

I had four players in double digits. Panthers D have been up and down all season – I may have to look into a replacement. Quick was a letdown after a superb start to the season, but hopefully this is a one week jinx. Pierre was able to nab a touchdown and put up a solid 9.1 points. If you watched the Baltimore game, you may have seen Flacco throw five TDs in the first half, with two going to Torrey Smith, who was on my bench. I’ll have to keep an eye on Torrey’s targets, as they are still way down. Luckily, the double-digit earners showed up and pushed me to a win. I am back on track with a two-game win streak and tied for first in my division.