Getting around the BEx Query Limitations using Analysis Office with Lumira

As you may/may not know you can only access the Visualize room with Lumira – no prepare, compose or share rooms are available.

But let’s say you have data in a BEx Query and you would like to share the Lumira story.  First I access the BEx Query using Analysis Office and have 2 workbooks, one for 2013 and one for 2014.  The data source to Analysis Office is a Solution Manager Incident Management BEx Query.

Figure 1 is a subset of the Analysis Office Workbook

Figure 2 shows the options merge and append.  I appended the two Analysis workbooks 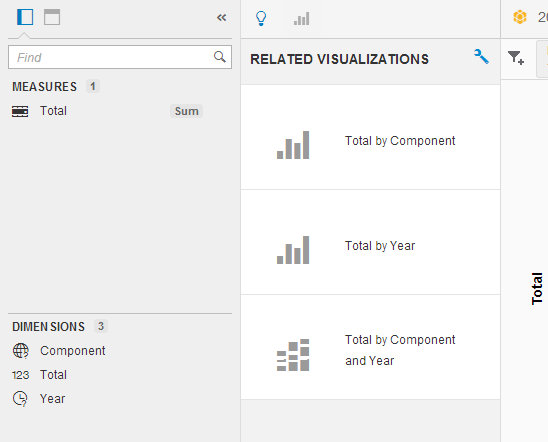 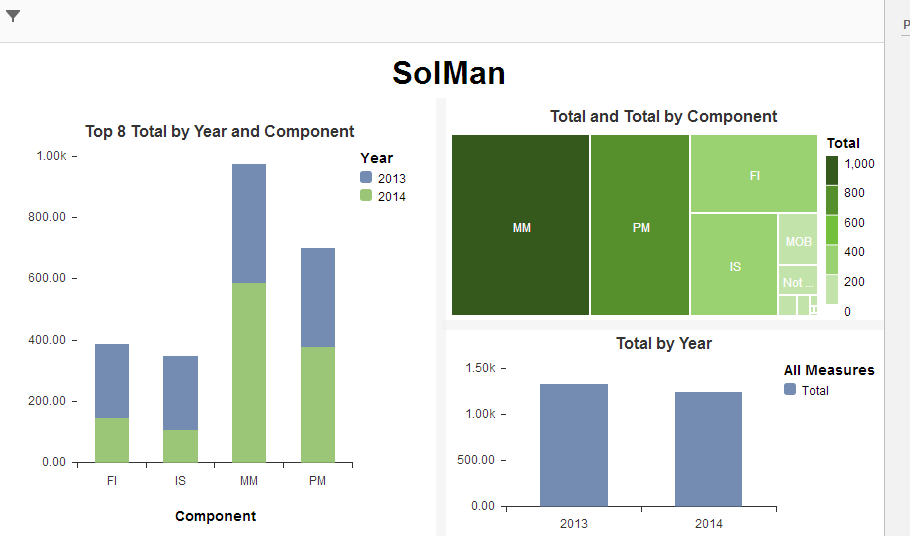 Now I can create a storyboard, something I can’t do when using Lumira directly against a BEx query.  I can also share it with Lumira Cloud.

Thanks for sharing 🙂 . I've installed Analysis Office but I need to get time on my hands to play around with is now against Solution Manager.

Thanks for the tip. However, like so many other workarounds, it involves using Excel as a "middleman". In addition to turning the solution "off-line" as you say, the problem with this kind of solution runs deeper.

Once in Excel, the data can no longer be trusted as current or reliable. Any data in Excel should be treated with suspicion. It is open to "manipulation" and therefore error. The aggregation process from multiple sources may also introduce errors.

Updating the data has been done manually, and may be time-consuming. Sometimes the underlying data can change enough (e.g. an extra column is introduced because of a new product), that half the solution needs to be rebuilt when the data is refreshed.

One of the major value propositions of enterprise IT is to free ourselves from these error-prone, untrusted, time-intensive Excel-oriented reporting processes. Yet time and time again, due to design/feature limitations of the software we find ourselves having spent $$$ for very little gain.

When dealing with multi-vendor solutions, it's perhaps inevitable, but I expect better from a single vendor. I have many similar stories and workarounds using HANA and Lumira.

Frankly, it's unacceptable. I live with it since the HANA/Lumira combo is free from a license perspective, but there's no way I'd ever pay $1000 per user for a product that perpetuates the need to use data in Excel to make critical business decisions.

In this case my analysis was purely "ad hoc" and not something I will do on a routine basis.

But right now there are limitations with the BEx Query and Lumira - being only limited to the Visualization room and not being able to share, this is a work around.

As you may or may not be aware, Tammy is not an employee of SAP. She is one of our greatest and inspiring mentors who finds and shares creative solutions to achieve business objectives. Where does she get her 48 hrs a day, I don't know 🙂

We have exciting plans on our BW road map, as well as other great self-service BI capabilities and various deployment options for all sizes of organizations and we will soon be providing more public communications and demos.

We were a little late on the start but I have no doubt in my mind that we will win this race. Everything we build is designed for a longer, and sustainable solution and sometimes it needs a little bit of time to sharpen our tools.

Thank you for your feedback and hope you can stay tuned with our on-going communication of upcoming plans and road maps.

Yes, I'm aware Tammy doesn't work for SAP. My response to her post was to raise awareness of what I hold to be an important issue, rather than to specifically call her to action. It was not a criticism of her workaround, but rather that she needed to create one in the first place, due to the limited functionality of Lumira.

Happily, she referred it on to you, and you engaged. That's great progress, because frankly, most of the SAP community engagement I see is one way, and almost all marketing fluff.

I applaud the Lumira team for its continuous improvement release strategy. There have been 5 functional (as opposed to bug fix) updates in the past 10 months alone. I'm sure that the feature backlog for Lumira is quite long, but so long as there are things that can be done with offline data (e.g. aggregate multiple sources, access to all rooms) that cannot be done with a live connection to the exact same data, I can't take the product seriously as real self-service BI tool.

I strongly suggest the team consider an "online-first" development strategy. That is, if a feature isn't fully functional and optimised for live connection to data-sources, then it isn't ready for release. Admittedly, all online sources are probably too much to aim for, so adopt a "HANA first" or "BI Universe" or "whatever first" strategy, but get rid of the "Excel first" development and testing approach I'm guessing is currently in play. Just because it's easy to develop and test with doesn't mean it's right.

I hope that you do take this feedback seriously, and do more with it than pay lip-service. I do believe that Lumira can be a great BI tool, but it'll get there sooner by addressing these fundamental issues before adding new features.

Thanks for the forward on to Sharon Om. Much appreciated.

Don't most reporting solutions begin their life as "ad hoc" before they become routinized?

Thank you also for recognizing our execution cycle. We have just released 1.20 to keep up with our delivery cycle and we are working on our next release.

Disappointed to see that there is no improvement in SAP BW integration functionalities to SAP Lumira 1.21 also. I really don't understand the need of updating the version number with minor changes. What is the option to have a self service front end for SAP BW data for a business user? as explained in above document, introducing analysis for excel in between lumira and BW is not a flexible option.

Is there in any plan in future to improve integration options of SAP BW with Lumira? The tool looks less flexible/less useful for an end user with current limitations. It is difficult for a consultant to suggest it as a self service tools to a customer knowing this limitation. I strongly agree with points mentioned by Derick. When features are not there for a live connection to data source, I don't think its matured enough to release as a tool/product. I have been hearing the names Visual Intelligence/Lumira for almost 2 years and still the tool is not matured to have a live connection to data source.

Its difficult for a consultant to tell customer that this feature is expected/under development etc. Lumira will be a very nice tool if it can support all features with datasource like BW. Hope it will happen soon

Also I think your appraisal of SP21 is inaccurate, the gains were well worth noting. See blog here http://scn.sap.com/community/lumira/blog/2014/12/10/whats-new-in-sap-lumira-121-summary

Thanks a lot for the links and happy to know that SAP is in the direction to enhance more features in BW integration with Lumira. I am sure that Lumira will be a powerful tool once all features are available for direct BEx connectivity and will be useful in scenarios where I work currently.

thanks again for the info.