October.  The first frost is giving notice about a new winter period. The leaves turn red and yellow and is falling down through the mist towards a moist ground. Hidden between the trees is an old cemetery. Wisps of autumn fog conceal a dark soul who sneaks between the graves. He is sniffing, unbearable stench crawls in his nose, but is not stopping him to dig for the corpses. His master, Dr. Frankenstein, needs dead old bodies to build the bride of his monster……and instead of the well known flash, in SCN one only needs to click the reply button, and immediately a dead old thread is reanimated and enjoys its miserable existence among the living. And the end of the story, you may know it, the crowd is chasing the monster into a mill and burns it down. But Dr. Frankenstein is still alive and is looking for more dead bodies to reanimate.

The crowd are the SCN users who report it to the moderator, who burns it by rejecting.

Doc Frankenstein is disappointed and defeated this time. He could not get what he aimed. However, the monster cannot be placed where the dead body parts came from, it has to be buried next to the living. Translated into jive:a rejected reply does not bounce the thread back to the place where it was before. The last change date is current and makes this old thread stay among the new questions.

Let us have a closer look on Dr. F, who is a split personality. But no matter who he is when he appears – something resurrected is left on his way.

Version 1: adding a new solution to a thread which is clearly marked answered

Version 2: adding an answer which was already given

Version 3: is actually a different type, see Type B

Just learned something new and wants to spread it. Has really great search skills as he finds numerous duplicate questions and adds always what he  just learned, stereotype by copy and paste to let all answers look equal.

Version 1: question as reply to a question without answer: “Did you get an answer?”

Version 2: question as reply to a question with several answers: “Did you ever get an answer?”

Version 3: question as reply to a question with a correct answer: ” How was this solved?”

He has done something fantastic, but usually offsite. Has great search skills and finds numerous old discussions where he adds “the solution can be      found behind that link”. Variations are those who wrote a document in SCN today, and add then reproachful to a 6 year old discussion that the OP      could have looked into their document for a solution. Spammers are a subspecies, who turned past successful  into money.

He always has the same problem. And I usually agree to this statement, as this sentence has no more info than many of the questions to which it   is added.

In case I shared this blog with you: Do you know in which category you are in? 😉

One positive thing can be said: all these people who reopened an old discussion had searched……

Only it looks like they stopped at the first hit, instead of looking into others too.

If you expected a picture of Boris Karloff because of the blog title, then I have to disappoint you, but I share a screenshot of MM discussions from October 7th.  Almost every 3rd discussion was a reopened (solved) discussion: 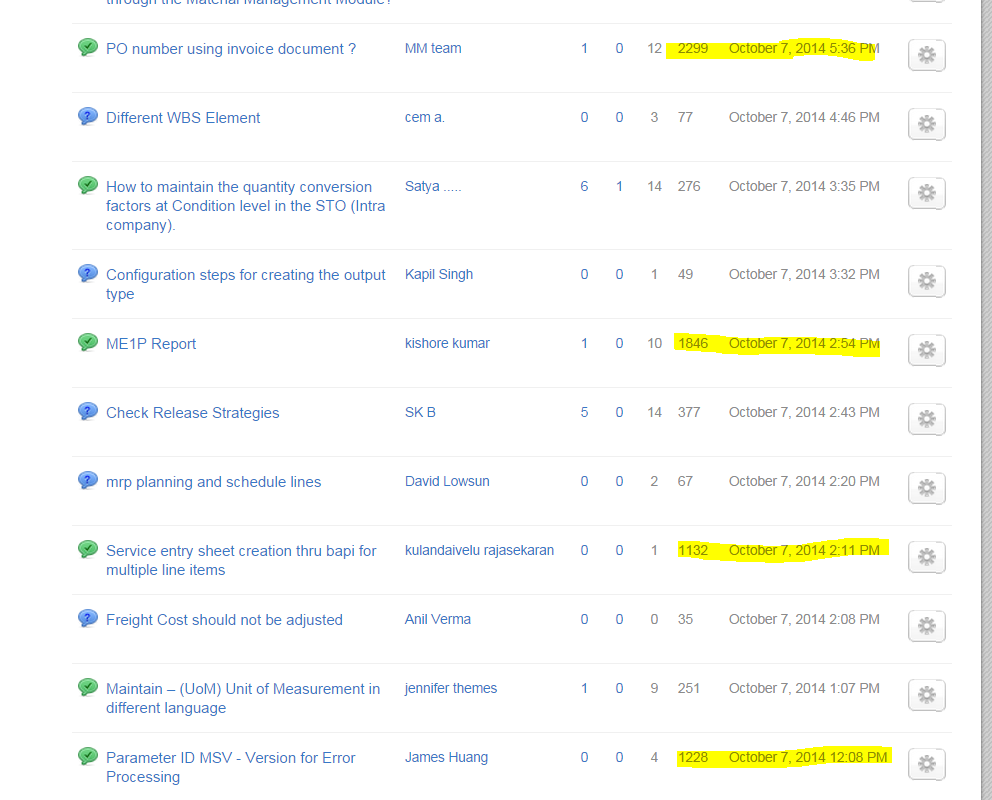 Let me ask some questions and give some comments in sequence to the above mentioned types.

Type A.1: How much is an alternative solution worth if the question has already a correct answer? Even a better solution is degraded in the very moment when it is added, as the readers will focus on the answer with the green bar on the right.

Type A.2: that is obvious – a redundant answer does not add any value. It just confirms that the poster of this answer had not read the entire chain before the reply was added. Or is he eventually a free rider who hopes to get 5 points when the first answer gets 10?

Type B: Does it add value if you get 10 to 20 equal discussions next to each other in a forum where just the same reply is added? Of course the chance that in future a lucky searcher can stop right here is big, but at the same time many new discussions get buried behind all the resurrected old discussions.

To all who want add answers: Please do it on new questions, where the poster is still interested in an answer.

Don’t misunderstand me – I have nothing against adding an answer to an unanswered old discussion. But it should be an answer, not just a “try this” reply.

Type C: I know certainly how this reply was meant, but it is really funny if you stick to the words in context to the existing discussion.

Type D: This is dedicated to the people who are only here to advertise their business, their own blogs, their websites. They could add some value to SCN if they contribute with their knowledge, but they just focus on getting the people off SCN. Sorry, no mercy. Nothing against a little kicking of an own blog or document. Many of us are doing it as normal contribution to current questions, and that is okay, but reopening several year old discussions to launch an ad for a new blog is not.

Type E: Even it is a nice gesture to say thank you – I usually expect this from the person who asked the question and got an answer – it updates the communication stream, the RSS feeds and sends email notifications to  many many people who are less interested in this part of a thread. It often looks like saying thank you to the the other guy who asked the question instead to the person who gave the good answer. Just click LIKE to the answer which helped you, this is the modern way of saying thank you, and it can be read by a machine and eventually ranks a discussion with many likes higher in the search results. And it makes it easier visible to other readers which answer was helpful among others, especially if the OP forgot to do mark the question as answered.

Type F: This is actually the most annoying type from my point of view. Just this little sentence: I have the same problem, how did you solve it.

Whats wrong:  The question is asked to just one person, the original poster (OP) of the question, instead to the entire community. This person was often not online for many years. Clicking the user ID could tell when the OP was last online. If this was many months/years back then a  reply is not like a  kiss wake up sleeping beauty. If the same question(how did you solve it) was asked a year before by someone else without any reply, then the same words are not really more sexy a year after.  Why did the question not have an answer? Maybe it was not good explained. Explaining the problem in other words can make it more understandable. Adding more detailed info, e.g. error message numbers, steps of execution, release infos as well as telling directly if the given answers were tested and why they did not work could give it a valuable push.

However, the person who added the reply is not the owner of the discussion. He is actually celebrating a party in neighbors garden. The OP gets eventually updates by mail years after he had asked the question (like getting telephone calls from other residents in the street).

And in the rare case of an answer it is not even possible that this answer could be marked with correct answer, because only the OP is able to do that, so it stays open and someone else will come along and ask, an eternal loop.

Not to forget that SCN has a reputation system. Helpful and correct answers will assign points. Since only the OP is able to mark a reply as correct or helpful it does no really attract others to answer a question which is added to a question of someone else.

Same is valid for already solved discussions. Honestly, who wants answer a question which is already marked solved?

In most cases of reanimated old discussions the owner is not coming back. However, every rule has an exception as you can see here