The pharmaceutical industry is major sector in India. It is world’s third – largest in term of volume.

Using Lumira application. I would like to elaborate Pharmacy world of India.

So I have generated some graphical representation which shows top 10 Indian pharmaceutical companies which are compared with different financial criteria.

Ranbaxy is among the predominant pharmaceuticals in India. It is founded in 1961. It is a research based pharma giant and become a public limited company in 1973. It is industry leader in pharmaceutical sector in India.

Ranbaxy is also reputed for its 11 state-of-the-art manufacturing facilities in countries like China, India, Brazil, South Africa and Nigeria. The company is especially well-known for having the highest research and development (R&D) budget among pharmacompanies in the world which is as high as US$ 100 million.

Cipla was founded by Khwaja Hamied in 1935 and was known as The Chemical, Industrial and Pharmaceutical Laboratories, thought it is better known by the acronym Cipla today.

Apart from its strong presence in Indian market, Cipla also has extensive export market and regularly export to more than 150 countries in regions such as North America, South American, Europe, Middle East, Australia and Africa.

The company was founded byAnji Reddy, who had previously worked in the mentor institute, Indian Drugs and Pharmaceuticals Limited, of Hyderabad, India Dr. Reddy’s Laboratories is one of the popular pharmaceutical companies with base in more than 100 countries. This company is very customer friendly. It takes care of the fact that maximum people get benefited by the products of this pharmaceutical company. It tries to meet the medical needs of the people.

Lupin was founded in 1968 by Dr. Desh Bandhu Gupta   an Associate Professor at BITS-Pilani, Rajasthan. Named after theLupin flower because of its inherent qualities and what it personifies and stands for, the company was created with a vision to fight life threatening infectious diseases and to manufacture drugs of the highest social priority.

Lupin first gained recognition when it became one of the world’s largest manufacturers of tuberculosis drugs.

Aurobindo  pharma an India-based private pharmaceuticals company having presence around the world. Aurobindo Pharma Limited is a pharmaceutical manufacturing company headquartered in HITEC City, Hyderabad, India. The company commenced operations in 1988-89 with a single unit manufacturing Semi-Synthetic Penicillin (SSP) at Pondicherry. Aurobindo Pharma became a public company in 1992 and listed its shares in the Indian stock exchanges in 1995.

Sun Pharmaceuticals was established by Mr. Dilip Shanghvi in 1983 in vapi with five products to treat psychiatry ailments. Cardiology products were introduced in 1987 followed by gastroenterology products in 1989. Today it is the largest chronic prescription company in India and a market leader in psychiatry, neurology, cardiology, orthopedics, ophthalmology, gastroenterology and nephrology.

Cadila Healthcare (is an Indian pharmaceutical company headquartered at Ahmadabad in Gujarat state of westernIndia.  It is a significant manufacturer of generic drugs.

Cadila Laboratories was founded in 1952 by Ramanbhai Patel(1952–2001), formerly a lecturer in the L.M. College of Pharmacy, and his business partner Shri Indravadan Modi. The company evolved over the next four decades into one of India’s established pharmaceutical companies.

Jubilant Life Sciences serves its customers globally with sales in over 100 countries and ground presence in India, North America, Europe and China. Its registered office is situated at 1A, Sector 16A, Noida Uttar Pradesh, India.

Wockhardt Ltd. is a pharmaceutical and biotechnology company headquartered in Mumbai, India. The company has manufacturing plants in India, UK, Ireland, France and US, and subsidiaries in US, UK, Ireland and France. It is a global company with more than half of its revenue coming from Europe.

Wockhardt was found by Habil Khorakiwala in the early 1960s.

Ipca Laboratories is an international pharmaceutical company based in Mumbai, India. It produces more than 150 formulations that include oral liquids, tablets, dry powders, and capsules.

In 2004, Forbes selected Ipca, for the second consecutive year as one among the first 200 ‘Best under a Billion Company’ in Asia.

It was founded by group of businessmen and medical professionals in 1949. 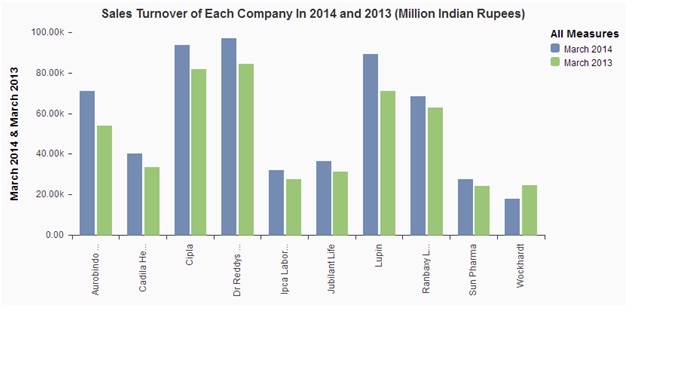 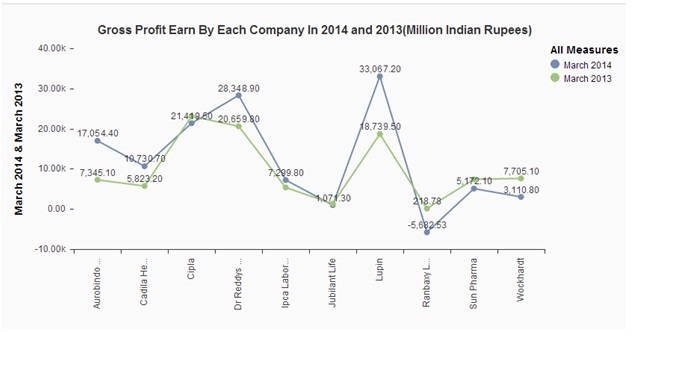 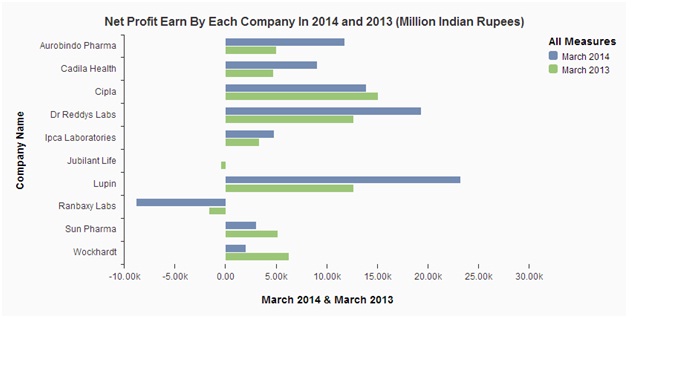 Above bar chart explain net profit earn by each company where we can see that  Ranbaxy lab showing  negative figures for both consecutive year. 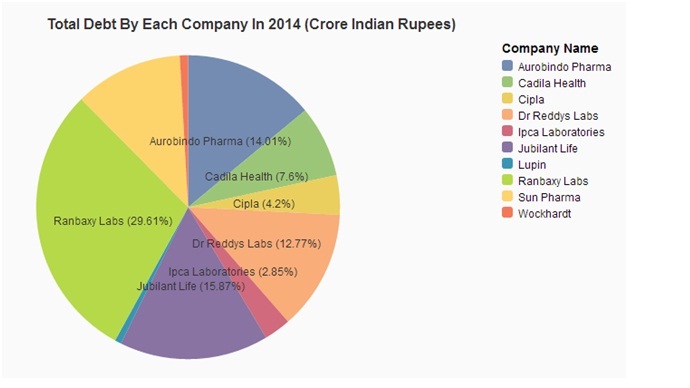 Above both Pie chart Visualize data for Debt by each company for both years. 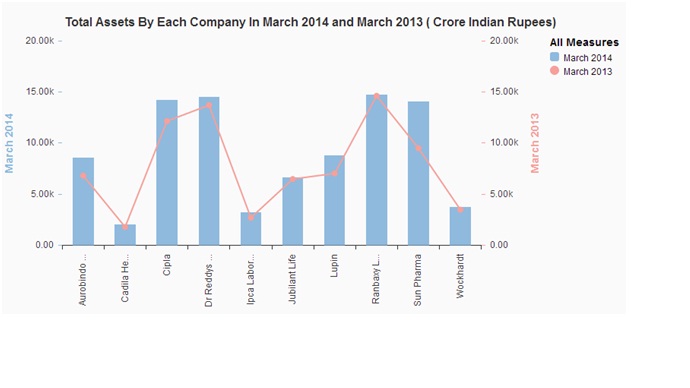 From above combined column chart we can see that Sun pharma total assets value increased more than other companies for 2013 -14 financial years. 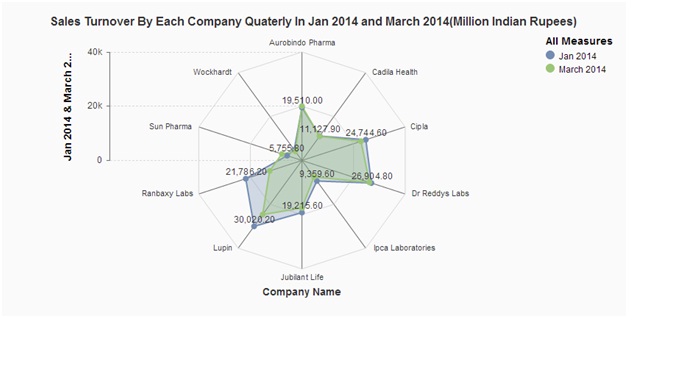 This Radar Chart explain us that sales turnover of all companies for last two quarter.

I very much like your analysis, thank you very much! As I think this could be interesting for our Life Sciences industry group, could you please add the tag "life_sciences" to you blog? Thank you!

Thanks for comment.I will post  new blog on life sciences companies within some days.  I am very much interested on your suggestion because I did my graduation in Life sciences.

I very much look forward to your next post! Please feel free to check out http://scn.sap.com/community/life-sciences and @SAP_Healthcare and to discuss with us!