Paris Fashion Week (PFW) has an iconic place in the international clothing trade show calendar, with catwalk shows held in historic venues such as the Louvre and Grand Palais. PFW brings the curtain down on the big four international fashion weeks (the others being New York, London and Milan) showcasing the clothes that we could see in stores for Spring/Summer 2015 (SS15).

Social media can give us a great insight of what is hot and not at a modern day fashion show, in real-time. We analysed social data that came out of PFW to find out which looks, trends and indeed celebrity stardust drove conversation. And with this information, retailers looking to fill their clothing racks next year are armed with the data they need to stay ahead of the competition.

At a show such as PFW, the conversations critics such as fashion bloggers are having can be very different to the chatter being driven widely on social media. But it’s important to understand both, as they will provide insights for retailers and brands valuable in drawing up their clothing lines for SS 2015. For critics, the top designer was Chanel, a brand with a huge amount of history and a larger-than-life creative director in Karl Lagerfeld. He came up with a headline-grabbing ‘feminist protest’ show at the Grand Palais, led by model-in-demand Cara Delevingne and complete with placards carrying feminist slogans. Other models at the show included Gisele Bundchen, Georgia May Jagger and Kendall Jenner.

Chanel was also in the top five when it came to general social media chatter, but number one was Givenchy, which had a show that wasn’t on the radar of critics. Talk around Givenchy was largely due to a celebrity couple which came to dominate much of the social chatter at PFW this year – Kim Kardashian and Kanye West.

For a retailer looking to prepare clothing lines for SS15 next year, an appreciation of what colours will be in fashion next year is very important. From analytics we saw at PFW, black and white were popular, followed by metallic silver and grey. An example of black’s popularity was with Givenchy’s collection, with Riccardo Tisci going for a ‘gothic’ and ‘new romantic’ styling for some pieces, which included leather, lace, grommets and corsetry. On the other hand, Christian Dior’s show was heavy on white fabric. 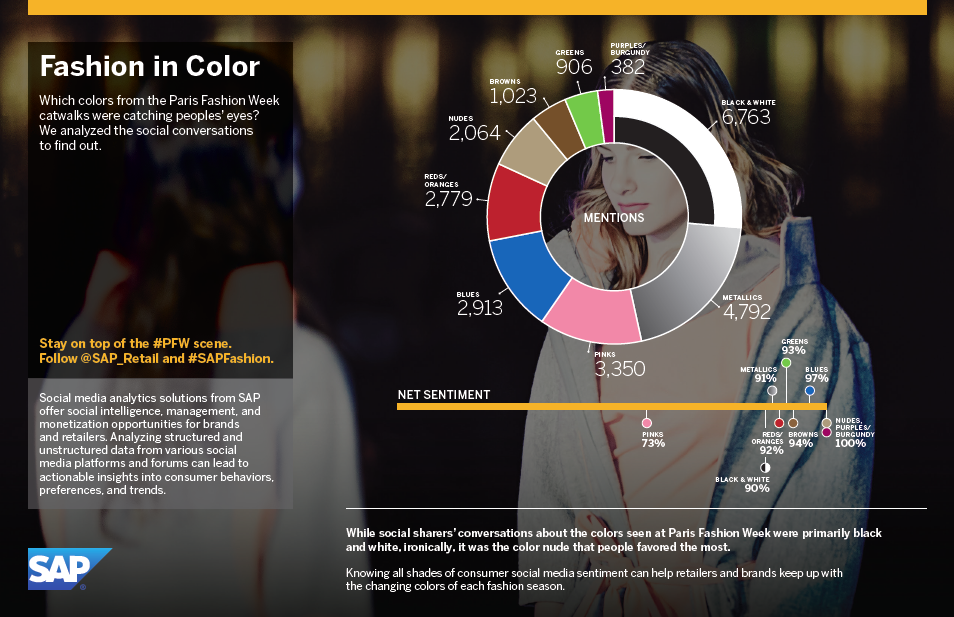 Although some would dismiss Chanel’s feminist ‘protest’ as a publicity stunt, many viewed the message as a strong positive. The actual Chanel SS15 clothing collection drew positive feedback, with its combination of classic Chanel looks and street fashion drawing a lot of praise. And although Givenchy’s show was dominated by Kardashian-West headlines, it was described as a ‘powerful’ collection of clothing.

Although missing the spark of celebrity that only the Kimye circus can bring, Christian Dior’s collection also drew a combination of high critical praise, large amounts of social media conversation and positive sentiment. People loved Dior’s collection (including shoes and bags), while a catwalk show at the Louvre showcased a spectacular ‘invisible runway’ thanks to clever use of mirror reflection. 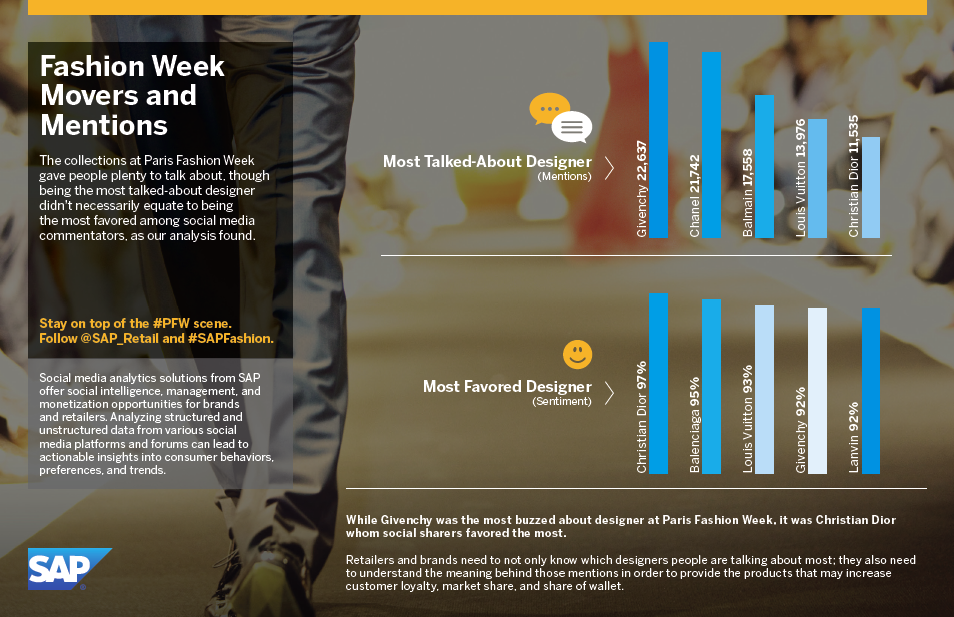 The strong showing by Chanel and Christian Dior was reflected by the popularity of their Twitter account handles and hashtags – @Chanel and @Dior scored the top two Twitter handles, while #diorlive and #chanel were both in the top ten hashtags.

Celebrity power on social media was also illustrated by the spikes Kim Kardashian caused in social chatter during PFW. She appeared at the Lanvin show near the beginning of the week, driving high conversation and negative sentiment, possibly due to a particularly revealing open blazer she was wearing. A similar spike occurred during her appearance with husband and baby at Givenchy’s show.

Although designer Alexander McQueen didn’t show up particularly highly in overall mentions and sentiment overall, it did receive a big spike of editorial and social conversation near the end of the week thanks to a ‘breathtakingly complex’ number of pieces, as well as the presence of a twin pair of Marc Quinn orchid sculptures which dominated the catwalk. 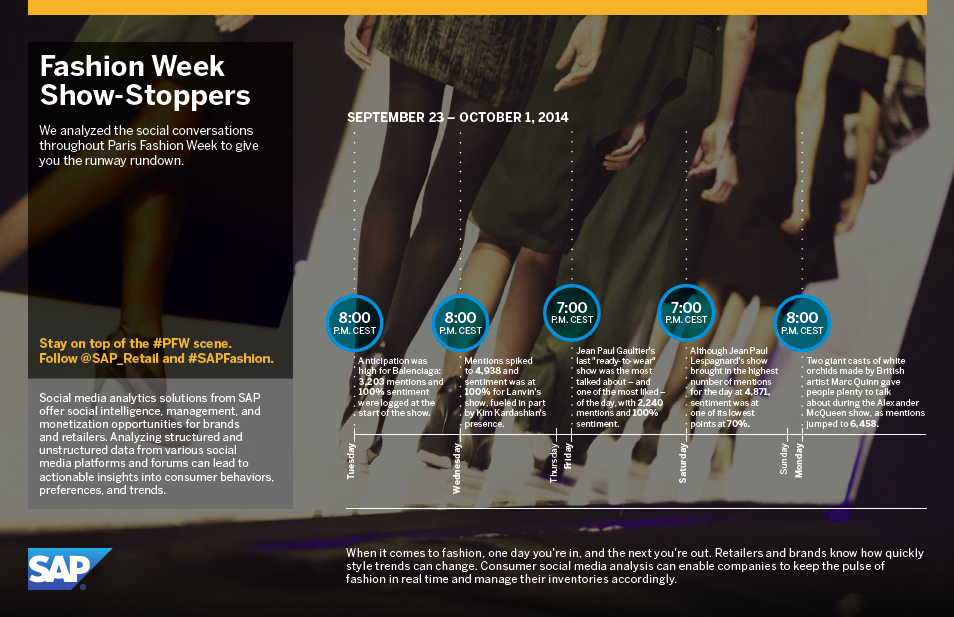 Another designer of note was Jean Paul Gaultier, known for his couture fashion style and unconventional pieces such as Madonna’s infamous cone bra. He had his last ‘ready to wear’ fashion show during the middle of PFW – this was one of the most talked about and liked shows of the day, with 2,240 mentions and 100% sentiment.

Who and what will you be wearing?

The long-running link between celebrity and fashion was illustrated through Kim Kardashian and Kanye West – at whatever show they appeared at, they dominated social conversation. But good fashion designers understand the power of celebrity. Many of the bigger fashion shows sit big stars on the front row – you can almost guarantee their presence will be highlighted on social media and in news outlets 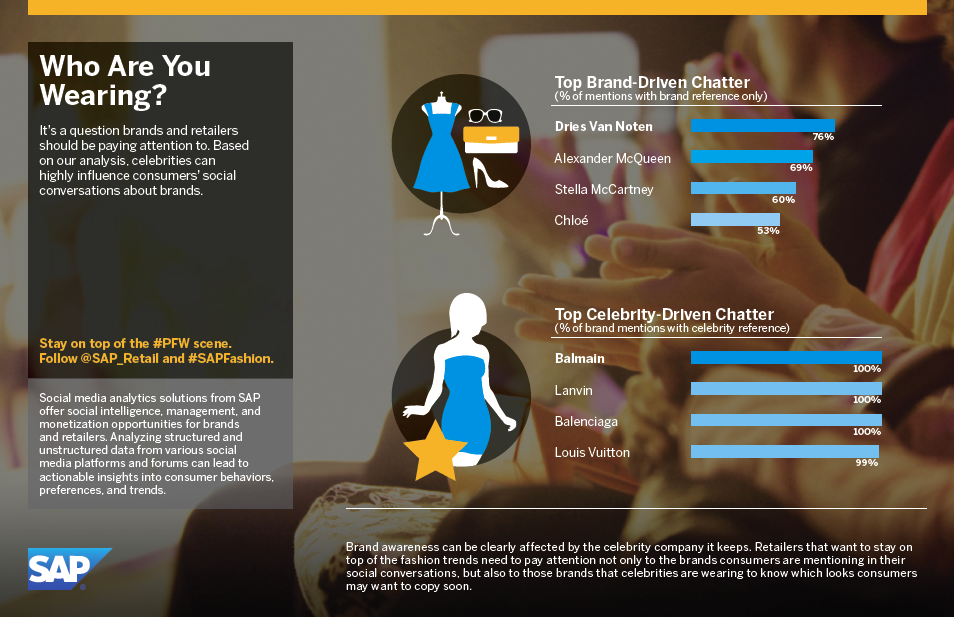 But social analytics driven by fashion and celebrity is still highly valuable to retailers as it really captures what’s hot and what’s not in real-time – many articles in magazines and websites now urge readers to ‘copy the looks’ of the famous. And with this data they can hopefully pick the right clothing lines to grace our favourite shopping stores in 2015.

Find out more by visiting our fashion week infographic page.

If only someone could remember what Kim Kardashian is actually famous for... Makes one long for the good old days when designer fashion was associated with bona fide movie stars and high society. 🙂

Interesting stats, thanks for sharing! Really like the pictures. And now I can read about fashion during work hours because - guess what - it's SAP related. 🙂