Taking the Data Geek III Challenge as a good opportunity to explore Lumira, I decided to analysis charitable donation in Australia as a contribution to the House of Spirits. Of course all the social good done by charitable organisations couldn’t happen without the donations that allows them to run and I take my dataset from http://www-958.ibm.com/software/analytics/manyeyes/datasets/income-and-charitable-donations-by/versions/1 which claims as its original source the Australian Tax Office (ATO).

The data is broken down by gender and state and contains total income, taxable income, average income, number of donation and total value of donations.

Firstly looking at the break down by gender we see that according to this data Australian women give a lot more to charity both as a percentage of their income and in absolute terms.

In fact, as we see here, women accounted for over 80% of private donations to charity.

However, as we see here women and men made similar gross number of donations.

Which of course implies a far larger mean female donation as illustrated below.

Moving on to comparing donation levels across states we see that New South Wales and Victoria account for over 50% of total donations.

However, this is really just a reflection of their large population and subsequent higher aggregate income. If instead we compare donation as a percentage of income between states we see that there is very little variability between Australian states.

The same information can also be displayed Geographically, which might be more instructive for those less familiar with Australia. 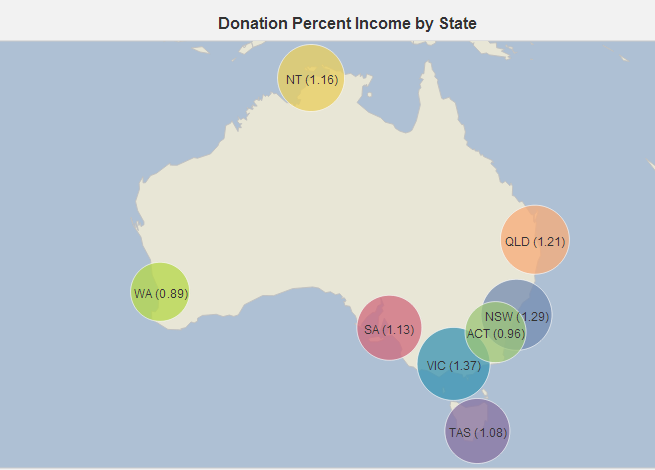 As mentioned there is little variability in terms of the percentage of income given as charitable donation between Australian states. A scatter plot of this variable against income for each state is almost flat and certainly does not show any strong trend.

However, as an aggregate measure this conflates two possible explanatory factors: wealth and population. If we eliminate population by creating a scatter plot of average income against percentage of income donated to charity we see a more interesting shaped graph with the percentage of income donated to charity clearly increasing initially and then falling once average income passes a certain point.

However, with a sample of only eight Australian states we cannot draw too many conclusion from this apparent relationship and carrying out any quantitative analysis of the relationship is unlikely to prove fruitful.

Charities might also be interested in looking at the groups from our data set that donate the most overall. The heat map below summarise this information. Unsurprisingly, four of the top five categories are groups of females although males from NSW do manage to squeeze into the top five as a result of the large income of that state.

One final visualisation. All the data analysed here is probable quiet well summarised by the following 3D Bar chart.

This is a very thorough analysis. It's interesting to see that women are donating larger amounts than men. I suppose charity organizations should take this into account.

As for improvements, you may want to sort your results. Also, you last chart is hard to read and I don't think it ads to the your analysis.

I once worked for an orphanage in South Africa and the director was very interested in the seasonality of donations. There's no reason to be worried if you only realized 25% of your donations in June because most donations were located around September (back to school) and December (Christmas and tax deductions). If your data supports this analysis, it would be interesting to show this.

Thanks for the feedback it is very much appreciated. You're right not sorting was a bit of an oversight that would have made all the chart more presentable and I agree with you that the last chart doesn't add much, I might not have included it if I weren't treating this as a bit of a learning exercise to try out as many of Lumira's visualizations as I could with the data I had chosen. Unfortunately the data set I have isn't detailed enough to carry out the analysis you suggest.