The most important news for Open SQL in ABAP 7.40, SP08 are as follows:

Inline Declarations after INTO

You might like this one. From 7.40, SP08 on you can place inline declarations with the declaration operator DATA( … ) that was introduced with 7.40, SP02  after INTO.

Or for a table

Either an elementary data object, a structure, or an internal table is declared depending on the results set defined in the SELECT list. See the documentation for details of the type construction.

Example for a searched case:

In the SELECT list, you can specify all columns of a data source using the syntax data_source~* from  7.40, SP08 on. This can be handy when working with joins.

The rationale behind this change is, that the INTO clause is not part of standard SQL but defines the data interface between SQL and ABAP. In order to enable future enhancements in the SQL part of Open SQL, e.g. UNION, the INTO clause has to be removed from the SQL part.

Some restrictions have been removed. E.g. from 7.40, SP08 on you can place a minus sign in front of an operator of an arithmetic expression in the SELECT list, you can carry out a simple CASE for aggregates, you can use LIKE and IN (…) in join conditions after ON, you can specify a subquery after WHERE dynamically.

But if you use any of the new things listed here, as already for SP05, the syntax check for Open SQL is carried out in a strict mode, where stricter syntax rules apply. E.g. you must use comma separated lists and the escape symbol @ in front of host variables. By this, at least in Open SQL ABAP enforces a release dependent  deprecation concept in a downward compatible way. Now what do you think about that?

Now what do you think about that?

Horst (err, i meant ABAP) is getting cooler with every release 😉

Horst, it's a tremendous update!!!

One of my fellows used to work with a non-SAP system which supported such features. And he was looking forward to getting the possibility of writing SQL queries as he had accustomed to.

And special thanks from me for

Not I, but my Open SQL colleagues 😉

Without you we would still have been in the dark about it.

And of course, many thanks to the guys from Open SQL team.

"I get a syntax error : The inline declaration "DATA(RESULT)" is not possible in this position"

then I misunderstood the sentence:

'You might like this one. You can place inline declarations with the declaration operator  DATA( ... ) that was introduced with 7.40, SP02  behind INTO now.'

Today I already wanted to use the new SQL syntax for a client report, but went into a problem.

The following two statements work (and no, this is not from the client report):

FOR ALL ENTRIES IN @carrids

But if I want to combine them, I'm getting a syntax error.

FOR ALL ENTRIES IN @carrids

I don't see any (good) reason why this shouldn't be allowed.

(and maybe the "together" should be placed directly after "literals" to make the message clearer because it seems only the combination of both is not valid -> "Host variables and literals together are not permitted in expressions with the addition FOR ALL ENTRIES.")

Up to now, SQL expressions (literals and host variables in the SELECT list are a special case of SQL expressions) cannot be used together with FOR ALL ENTRIES. Simply a question of workload on the developer. But there are plans to tackle that too.

One question are there any plans for SUBSTR function or LEFT / RIGHT? I don't found any infos about it in ABAP Keyword Documentation .

In the past we must select the data from the database and then do a loop and drop out the lines which doesn't mach the abap substr in the loop.

There are indeed such plans. In the end, Open SQL should support the same functions and expressions as the ABAP CDS - both are open and have the same code base.

You will use the advanced view building capabilities of CDS in order to persist your model and Open SQL - well as embedded SQL within ABAP programs.

As long as Open SQL does not offer the same functions and expressions as ABAP CDS, you can create a CDS view that encapsulates your SELECT with a SUBSTRING function and select it with Open SQL as a workaround.

is this a known issue?

Sure, and documented too 😉 .

If the content of a host variable read in an operand position needs to be converted to the target type, this is done using the rules for lossless assignments. If the assignment cannot be lossless, an exception is raised.

And that is good, as your example shows ...

I am driving multiple SoH migration and S/4HANA Conversion project. When we do remediation we change all Select Single ( Which are reported in SCI ) as per requirement and we use inline declarations.

In few SELECT up to 1 rows , we get dump for the SAPSQL_DATA_LOSS . So we need to rework on those after getting the defects .

Why Inline declaration not able to declare a compatible target structure for few cases ! How to identify the cases where we should avoid inline declaration in SELECT statement , to avoid the defects or rework .

One Example given below where I got the same dump and then I use explicit internal table declaration instead of inline declaration .

we have Release 7.40 SP11. I wonder of the result of the following SQL Expression:

The first column of lt_result is a CHAR, length 2! (I would expect 3 because of the 'BBB':

If I remove the "ELSE" of CASE, then the column has the correct length of 3.

I am finally able to use the SP08 features.  But even though the new position of the INTO-Clause works fine for the syntaxchecker, the editor doesn't really seem to like it and marks it as faulty.

Yes, some new version should do it ...

Hmm - the SAPGUI doesn't seem to be the problem.  I installed the very latest GUI-Patch ( 7.40 Patch 6 ) wich was released just in these days and the problem remains.

Since I get the same coloring using Eclipse maybe it's not a GUI-Problem at all. Any ideas what else might cause this?  It's quite annoying to see correct code being marked incorrect.

Do I assume right, that when I code:

that the resulting table is of the type STANDARD TABLE WITH EMPTY KEY, or does the table inherit the primary keys of the database-table?
If I used the ORDER BY clause - would I then get a SORTED TABLE?

No need to assume, you can read it here

"INTO TABLE @DATA(itab) declares a standard table itab ... with an empty table key":

No exceptions from that rule.

Thanks for clearing this point - should have remembered, that the documentation has been updated as well ... silly me.

We're on 740/SP13 where the below SELECT statement with GROUP BY..CASE works perfectly fine. 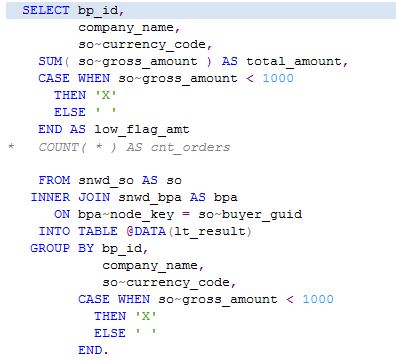 However, when I use a string expression in GROUP BY..CASE, it gives me an error for the below SELECT statement. Does this mean, GROUP BY..CASE works only for numeric expressions and not for string?

Please, simply have look into the documentation, this restriction is clearly described there:

Is there a chance to get a case insensitive open sql search? It would be useful in association with odata.

In fact there is a very good chance for SQL-functions UPPER and LOWER ...

I wonder - how does the ABAP - compiler distinguish between commas from a comma-separated column list in the select-clause and the commas used with the ":"

Since you don't have @ in front of value1, value2, it is old syntax and a comma separated list isn't possible anyhow.

But in fact, the colon always wins and writing the statements separately must result in correct syntax, either old or new.

Is it not possible to use a NUMC column in a CASE comparison? I get an error "Comparisons using < in this position are possible only if GJAHR has a numeric type."

In my case GJAHR is NUMC4

Never mind, found the solution. I tried casting GJAHR before I posted but got a different error. A closer look at the documentation then brought up the idea to reverse the operands and have the casted GJAHR as operand2. This works for me:

This code runs fine. However, when one comments out line 4 and uncomments line 5 we get runtime errors (dumps) CX_SY_DYNAMIC_OSQL_SEMANTICS complaining about not using the "new OpenSQL syntax".

This is unexpected since both SQL statements are identical. What are we missing? The dynamic WHERE works fine with:

What are we missing?

◾Subquery specified in a dynamic WHERE condition

Am I correct that the CASE statement cannot include OR for single operands--I haven't been able to get this to work, e.g.,

I want to use CAST in select where the field will be referenced to a DATA ELEMENT. Is this already possible? If yes, how to properly code it?

Currently, I am limited only to referring my cast to built-in datatype. Please see my code below.

How can I read just last record in a select query.

for example ; A simple SQL

i need to write the same thing in ABAP.