The Zen of Golf – Analytically Speaking

My standing joke about my golf game is that I’m lucky to have a close group of friends who keep inviting me back every weekend—regardless of how I play. A relative latecomer to the game about a decade ago, I like to think my unbridled enthusiasm makes up for any innate athletic shortcomings.

Anyone hooked on this game understands the sheer joy of hitting the ball 100 percent square and watching it soar into the stratosphere. Chasing that too elusive thrill, I’ve binged on all kinds of technology from a metronome clipped on my visor to even out my swing tempo (it didn’t), to the first clunky GPS devices that my golf partners wanted to borrow (now everyone has their own). And, I’ve blogged previously about the technology that my golf pro uses, something I eagerly await every year as her repertoire evolves. Someone I was partnered with once remarked that golfing with me was like playing with Bill Gates. I took it as a compliment.

This is why I’m all over the prototype of a next generation golf analytics solution that my colleague, Raimund Gross, Solution Architect and Futurist at SAP, has shared with me. Still at the conceptual stage, this cloud-based technology opens up a whole new world of data correlations near and dear to every golfer’s heart.

“Golfers generate a huge amount of potential data points, but hardly anybody captures it for later analysis. There are numerous apps, gadgets and devices on the market aimed at supporting golfers, but most address only a single aspect of the complex sport. We’re turning Big Data into simplified guidance for golfers,” says Gross.

Combining historical and predictive analytics, the solution goes deep and wide providing usable stats based on how someone plays by hole, by round, and by season. The concept is to collect and crunch shot data that matters. It’s not just how many times you hit the fairway or reach the green in regulation. It’s how many times you shanked it into the woods to the right or into the water on the left. It’s what would have happened if you’d selected your 7 iron instead of the 6 hybrid. As the screen capture below shows, the data comes alive in a color-coded, interactive visual display allowing you to map out alternative ball paths for different clubs on any hole. All of the data is based on the average shot length and placement of your ball in all of your rounds captured in the system. 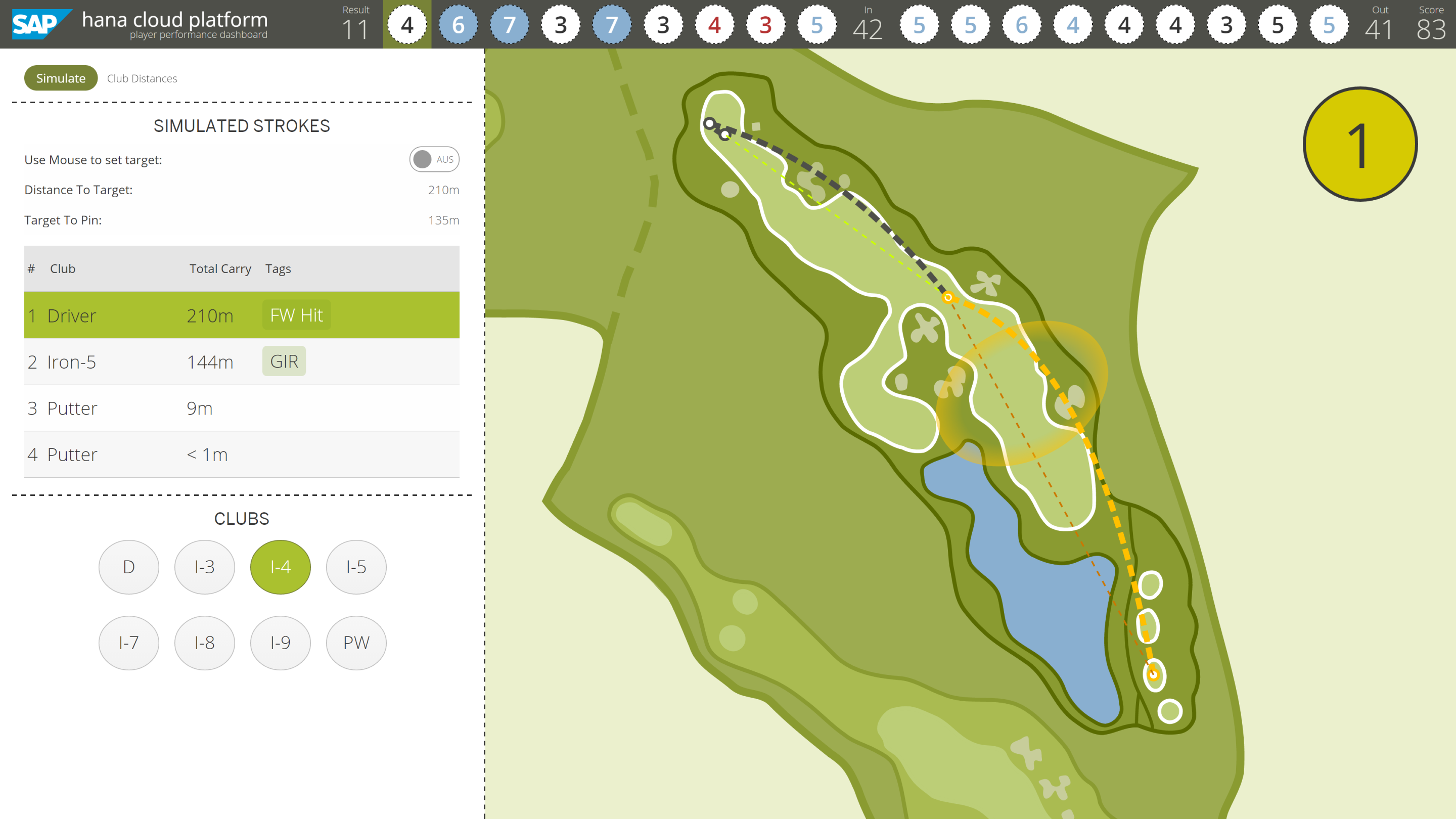 The app tracks putting in the same way. Beyond just the number of putts and overall averages, golfers can see what percentage of balls drop into the hole correlated to the length of each putt. Here’s a screenshot of a player’s complete round. 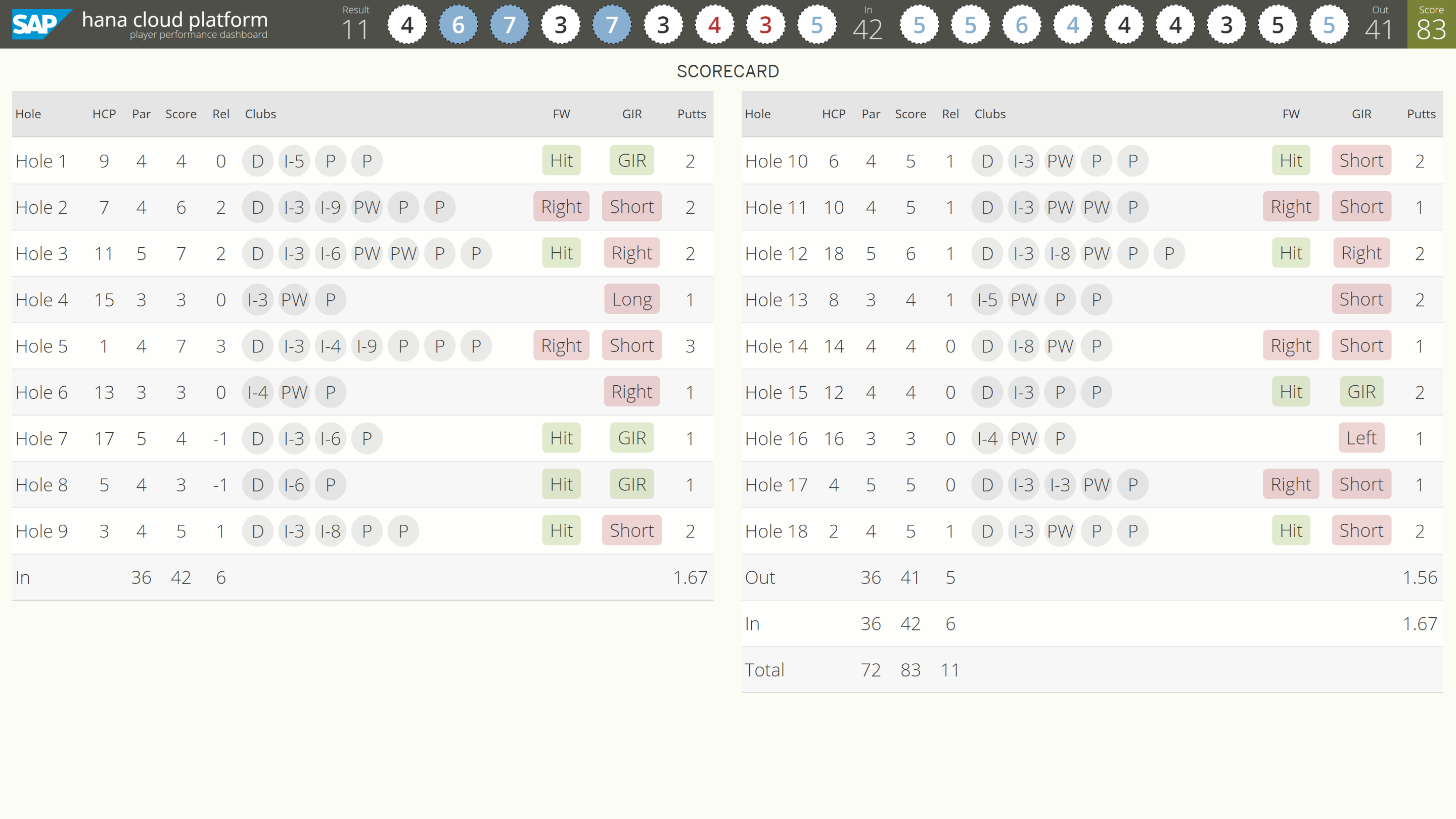 The idea is that by combining ‘what if’ scenarios plus historical data, golfers can improve their game. Functioning as a sort of digital caddie, the solution makes it easier to identify trouble spots and figure out what to focus on with your golf pro and/or on the driving range and practice green. Golfers can plot new strategies before and after playing by viewing the data on any device with a web browser—laptop or tablet.

As for the technology underneath, Gross told me that the solution runs on the SAP HANA Cloud Platform, and consists of a smartphone app that transmits data from tags on the clubs using NFC (nearfield communication). The concept right now has been entirely developed by SAP but there are certainly partnership opportunities with sports equipment manufacturers, for example.

Although not commercially available yet, the technology was recently used at the Solheim Cup Charity Promotion Event that included Paula Creamer. Here’s a screenshot of the Leader Board that captured real-time stats on each golfer’s shot for the longest drive competition. 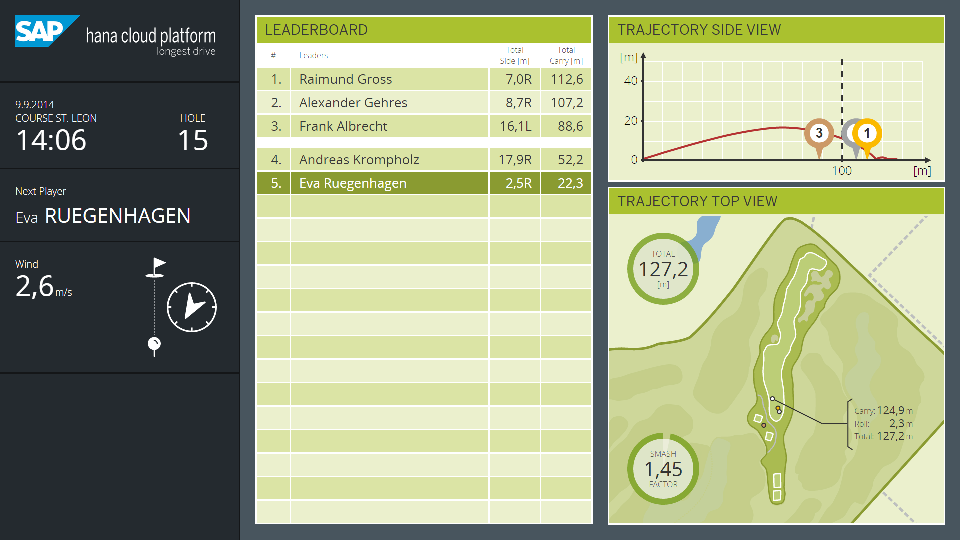 Golf is arguably one of the most complex sports impacted by a multitude of variables within and beyond the player’s control. Stroke mechanics will continue to challenge novices and seasoned pros alike. My company’s mantra is “Run simple,” and it would great to translate that credo to my golf game.

Being a Golf-aholic and BI Consultant all I can say is: This is Awesome!

Can't wait to have a go with this app.

Thanks Carlos. I feel the same way.

Cool, I had been pondering on a similar idea using the hana cloud.

I even bought NFC tags to hook up to my golf clubs so I just had to bump my cellphone to get location data and club type.

Sadly, NFC only works when my phone is awake, and it's mostly in standby...

So I kinda put that idea in the freezer.

Glad you like this. It's a prototype right now and if you have access to our internal systems, I can share a few more docs with you. Please email me on my SAP account.

the phone application needs a bit of fine-tuning. You are absolutely right.

So the app will be active but the display turned off to be much more energy conservative.

There are other vendors that do the same. Hardware and/or software focussed. The main difference is that - at least to my best knowledge - none of these can do the real-time part sufficiently.

It is highly unlikely that we will build our own hardware for these cases. So integrating whatever is out there is a more viable option.

Amateur golfers can improve their game if they practice constantly on a professional golf course. On the other hand, golf courses want to offer the best experiences to their clients. But without the right specialty services, like the ones offered by the Troon golf management company, this goal is difficult to be achieved. So, a golfer, professional or amateur, should search only for the best golf services on the market.