Visual Facilitation is an innovative way of representing the information through the use of graphic symbols and minimal text. It can also be used as real-time note taking method at meetings, seminars, and conferences. At these events, the “visual facilitators” will listen to a speaker while capturing the content in visual manner on a large-scale paper or canvas.

In July 2014, our team, the Design and Co-Innovation Center (DCC), had the opportunity to participate in a Visual Facilitation training along with other teams from SAP for two days. The training took place in the Design Thinking space at the SAP Palo Alto campus, and was taught by Tobias Hildenbrand and Stefan Behrendt, the Visual Facilitation specialists from SAP Germany. 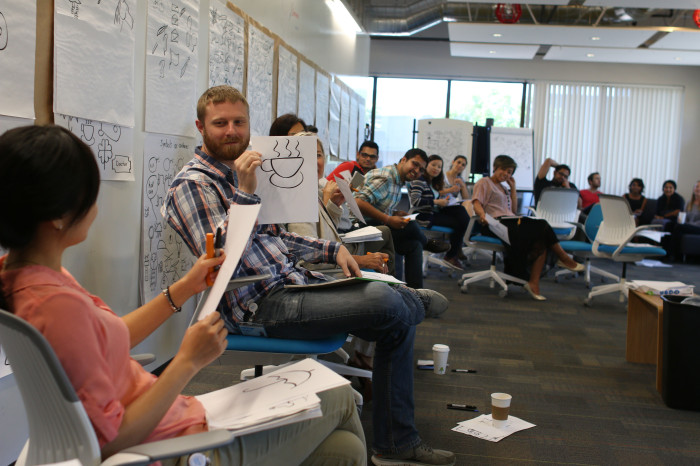 Despite entering the workshop at various levels of artistic ability, participants would learn that it isn’t necessary to successful visual communication.

On the first day of the training, I recall seeing my colleagues looking at one another, not knowing exactly what they were about to do. Some doubted that they would be able to perform visual facilitation due to their lack of drawing skills. Some questioned whether visual facilitation, which involved a lot of seemingly old-fashioned hand drawings, would have its place in such high-tech environment, like at SAP. These doubts seemed to evanesce as the workshop went on.

Being a good artist may have helped some of the participants to excel early on, but we later learned that a good artist is not necessary a good visual facilitator. At the beginning of the workshop, Tobias and Stefan taught us how to draw simple visual elements, including lines, shapes, containers (of text and images), arrows, shadows, and highlights. The participants were surprised and relieved to learn that this was all the technical skill that they needed. However, to be become good visual facilitators, technical skill (i.e. drawing skill) is only a small part of it. The rest was mental. First, one must be a good listener. In contrary to the traditional note-taking method where one can simply write down what one heard, word by word, a good visual facilitator has to listen and understand the subject matter thoroughly to the extent that they can tell the story about the subject matter to others.

Second, a good visual facilitator must be creative. Sometimes, it is not easy to come up with a simple, yet appropriate, graphical symbols or analogies that can represent a complex or an abstract concept. This is where the visual facilitator’s imagination is needed. For example, a simple illustration of an iceberg can be used to illustrate characteristics of a multifaceted subject; the exposed tip of the iceberg represents its superficial attributes, while the greater, underlying traits are hidden underneath the water.

Last, but not least, a good visual facilitator must be confident. Most of the time, visual facilitators perform live in public. They will have to make quick decisions (about the layout, the graphic analogy, etc.) and execute on them while everyone is looking. While part of the confidence may come with practice and experience, a can-do attitude is essential for all visual facilitators. 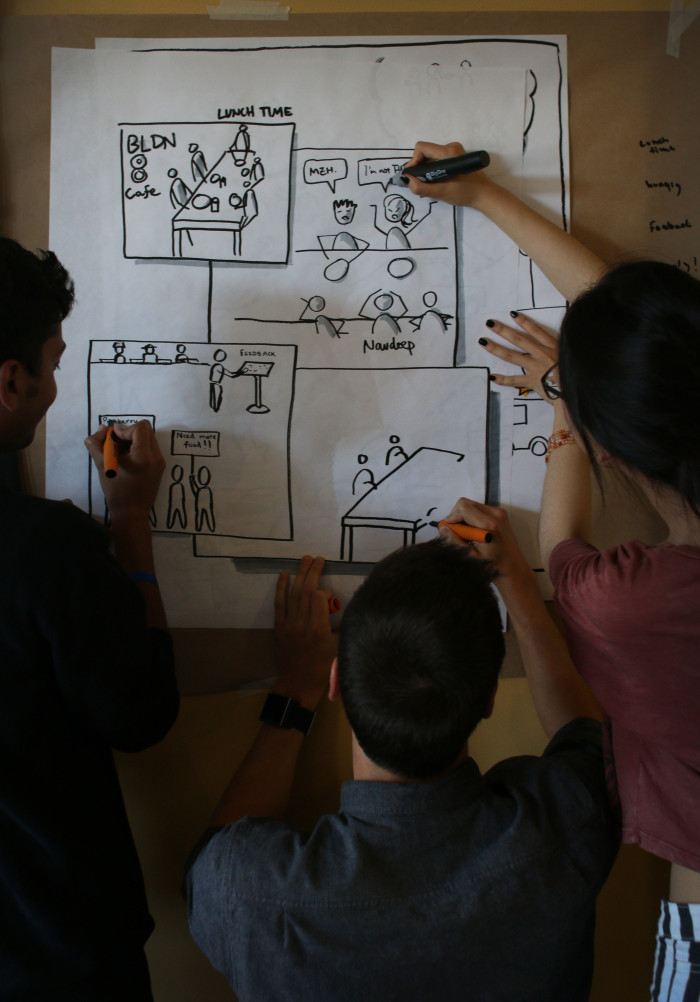 Participants gained significant confidence and skill over the course of the two-day workshop, culminating in a 4-tile storyboard, in this case describing a future lunch time scenario.

Secondly, you may have learned in science class about the Left Brain – Right Brain Theory. The traditional note taking favors left brain (languages, numbers), and ignores the right brain (colors, images, creativity). Visual facilitation is non-discriminatory. It addresses both sides of your brain, using elements that everyone can appreciate, regardless whether they are left-brain or right-brain dominant.

The last benefit, which may be the most important of all, is that visual facilitation has better recall value than the traditional note taking. Studies have shown that people learn and remember information better when it is accompanied by visuals. I still remember when I was a kid, that flash cards with graphics proved to be very useful in helping me learn new words. I may not be learning as many new “words” today as I did in school. But, in this fast-changing world where I have to be alert and absorb new concepts like a sponge on a daily basis, I learned that visual facilitation training is not only just relevant, but indispensable. 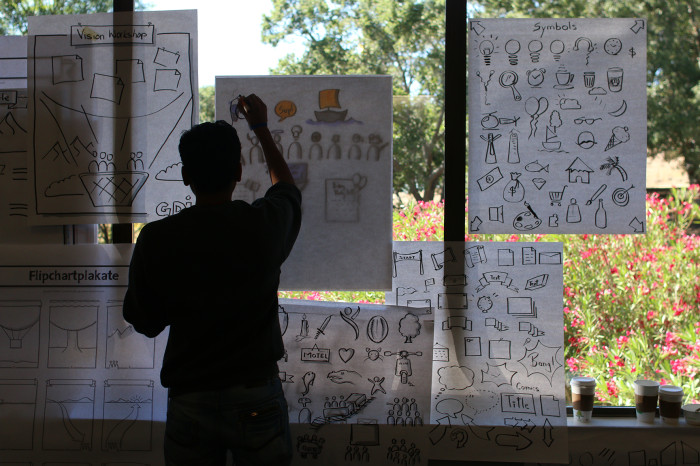