September’s Milan Fashion Week (MFW) was where all the classic Italian designers came out to parade their collections for Spring/Summer 2015 (SS2015). This was a week where big brand names like Armani, Versace and Dolce and Gabbana came to the fore – internationally-known premier fashion labels that have huge resonance both online and offline.

We dug into the social chatter around MFW and found insights which could make a real difference to brands and retailers looking to decide what kind of clothing lines they should present to consumers next year.

As usual for the Italian show, the powerful fashion label Armani was dominant. In terms of general social media chatter and the fashion critics, Armani came out first and second respectively. This was to be expected – after all Giorgio Armani is Italy’s most famous fashion designer – and his SS15 collection was generally well received. 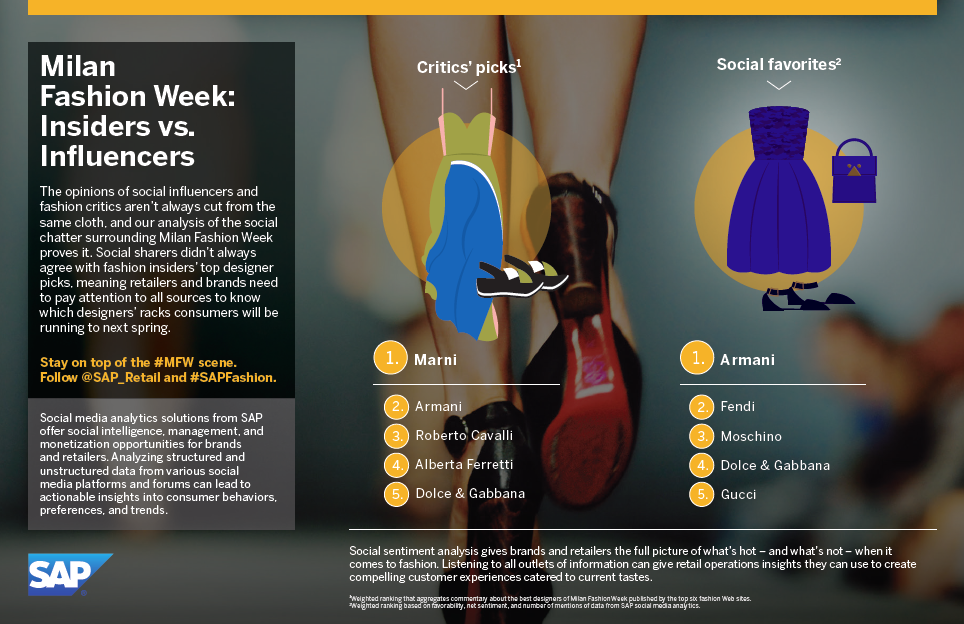 However, there are brands which are either talked about on social media or by fashion critics, but not both. One of these labels was Marni – critics could not stop talking about its flower-power dominated SS15 collection, but the clothes didn’t receive much attention on social media generally.

This could possibly be due to the nature of Marni’s clothing which is very much ready to wear – The Guardian described Marni as “less red carpet, more art gallery opening, and all the more loved for it.”

Fendi is a brand on the luxury end of the scale, which is why it wasn’t a favourite of the critics but second top designer in terms of social media. This was helped by famous models that attended Fendi’s show, of which internationally famous and sometime controversial fashion designer Karl Lagerfeld is creative director.

Kendall Jenner of ‘Keeping up with the Kardashians’ fame walked down the catwalk, while the most famous active model in the world right now Cara Delevingne appeared, important because she has been quite selective in the international fashion shows she appeared in this year.

For colours, social media chatter was driven by black and white, as well as blue. According to critics top-to-toe blue is a big trend for Autumn/Winter 2014, and Armani’s SS15 collection indicated that this trend was likely to continue with its ‘sea’ collection showcasing a number of clothes that sported varying shades of blue. 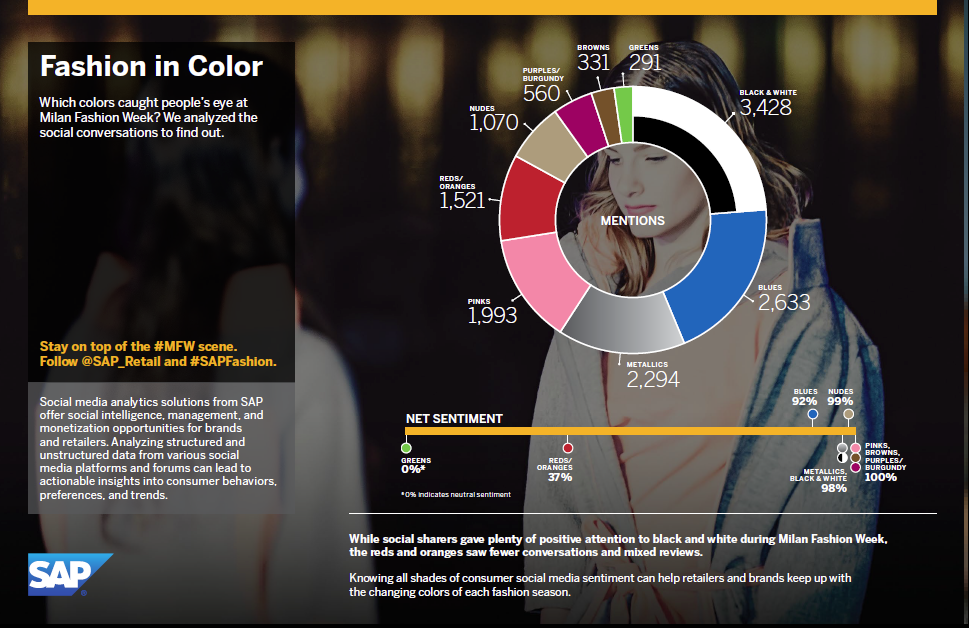 The ‘black’ conversation was driven by Dolce and Gabbana, which presented a Spanish themed collection that that had the brand’s signature black quite prominent. In the past D&G has been known for creating items like black-lace dresses, as well as black bras worn by celebrities as famous as Kylie Minogue and Madonna.

Another interesting brand to look at was Moschino, the third top social media designer behind Armani and Fendi, and which drove a lot of chatter around the colour pink. This was because of its ‘Barbie Girl’ themed collection, which caused quite a bit of stir – not all of which was positive!

Moschino’s Creative Director Jeremy Scott sent his models down the Milan runway in Barbie doll inspired dresses to the sounds of Aqua’s ‘Barbie Girl’ song. The show was even opened by a model dressed exactly like a doll that had been gifted to audience members.

As well as social media attention, labels like Armani, Fendi and Dolce and Gabbana inspired love. As well as carrying lots of blue, Armani’s sea inspired collection drew a lot of praise over its clothes where “everything was in muted tones and in the best of taste.” 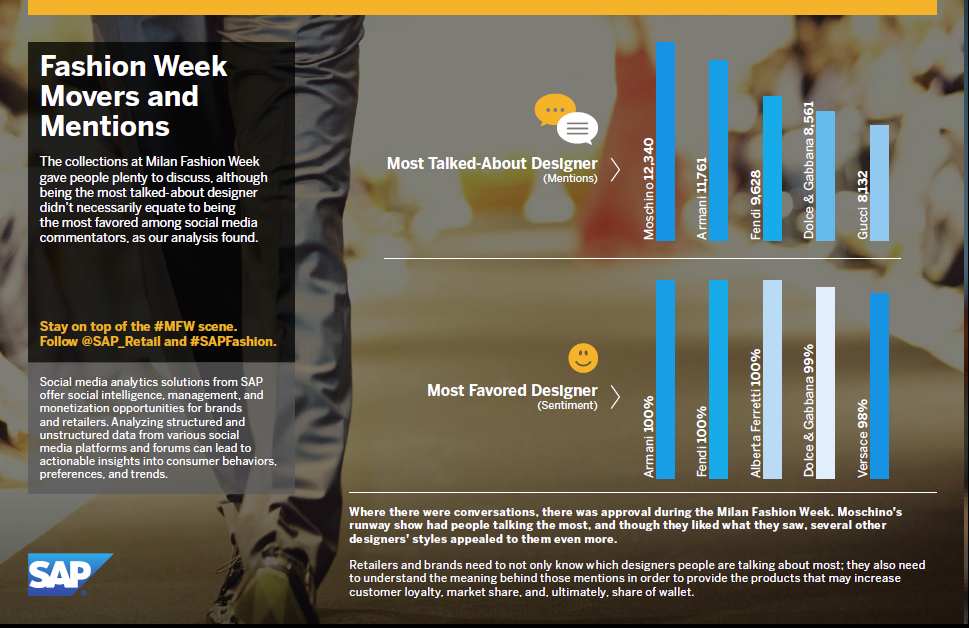 was described as “bringing the sexy back”, with a collection inspired by the Spanish invasion of Sicily which brought “baroque, religion, colour and flowers.” Models wore “matador-style jackets, flamenco-style layered polka dot dresses and white bullfighter shirts.”

We mentioned Moschino’s Barbie Girl collection as drawing a lot of buzz, but as our reports show – a fair proportion of it was negative, which is natural considering the gimmicky nature of the show.

The power of these two shows was supported by social conversation driven by their official Twitter accounts – handles @dolcegabbana and @Moschino had the two highest amount of mentions.

Although MFW chatter doesn’t begin until the week of the actual show, hype around it begins a week or so before and builds to when the show begins.

During the week, there were spikes in social chatter with Marni’s flower market fashion presentation, and Dolce and Gabbana’s fashion show. Both drew a lot of editorial and social feedback. 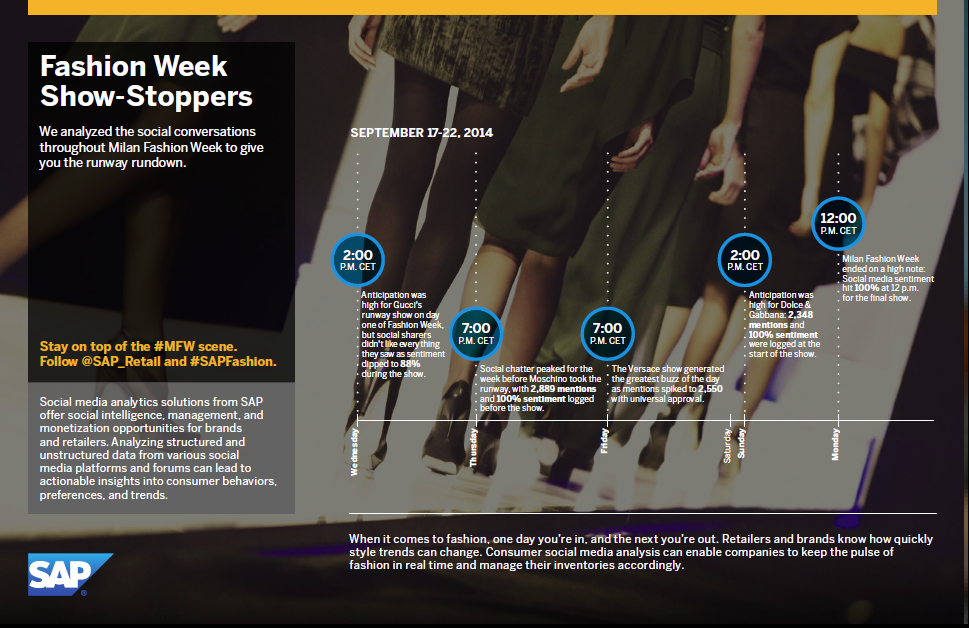 Although not engaging in serious social media campaigns, some brands were still mentioned widely on social media due to their enduring classic fashion appeal. Although @Armani did not come up highly as an official handle, the #giorgioarmani and #emporioarmani hashtags were popular, as were #prada, #gucci and #versacelive.

MFW more about clothes than celebrity

MFW didn’t have a roll-call of celebrity faces, which was often the case in the London and New York Fashion Weeks. This meant that celebrity wasn’t such a factor in some of the reporting we put together – In Milan, it was the clothes that were the key factor in social. And this analysis will be vital for both brands and retailers to decide what kind of items they should be putting out on the racks next summer.

For more information on the Milan Fashion Week take a look at this page.