Greetings to all the Baseball fans, fans of Lumira, Data Geeks, and those who have sworn allegiance to the House of Titans!

Fresh from the 2014 SAP World Cup Football Challenge, comes the SAP Baseball Play off Challenge! Show off your knowledge of what is billed as America’s Favourite Past-Time.

No game screams stats like baseball. Statistics are such an integral part of the game that they have changed the way that some teams build their teams. Brought to the forefront by the movie Moneyball, (although the weight that stats play in scouting was somewhat refuted in Trouble with the Curve) statistics are something that all teams pay attention to. No matter which movie philosophy you subscribe to, this challenge offers you both paths. 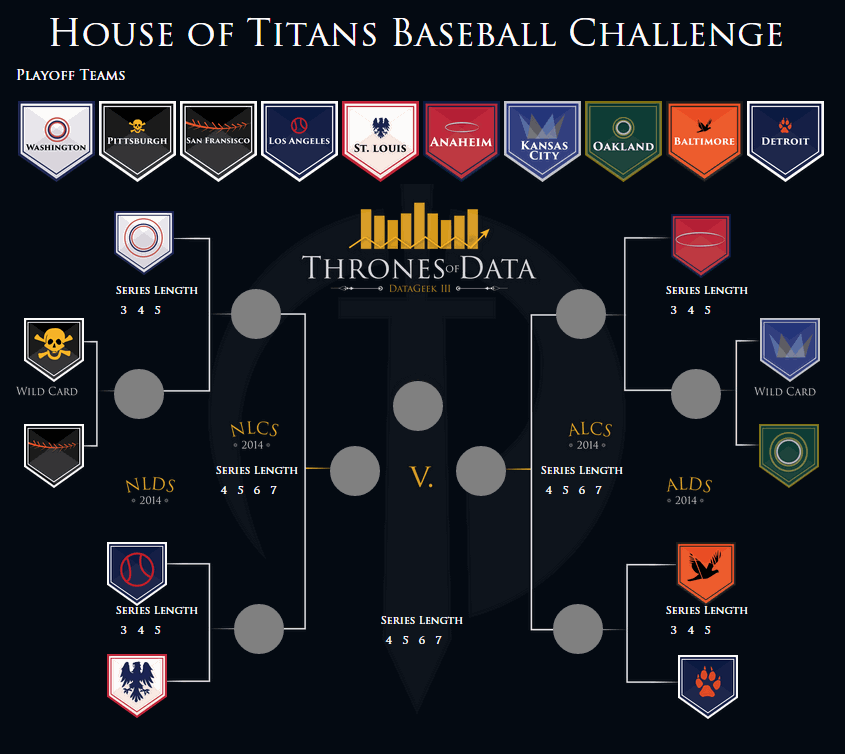 We want you to use Lumira Visualizations to back up your picks as well. Not only to prove you’re not a fluke, but to get a really cool t-shirt! That’s right! If you create a Lumira visualization, and submit it through the Data Geek challenge (see how to enter here) you’ll not only be qualified for the SAP Play-off Challenge, you’ll also be entered in the Data Geek III, Thrones of Data Contest! It’s a 2 ‘fer!! Who doesn’t like that?!?

How does the #SAPPlayoffChallenge work?

Now, if your team crashed and burned early, don’t give up hope! All is not lost. There are still opportunities to score some big points.

Step up to the Plate!

Show us how much game you have!

If you submit your Lumira Visualization and blog, to the House of Titans Early Bird Baseball Challenge,you are also entered into the third instalment of the Data Geek III, Thrones of Data! Good Visualizing, and PLAY BALL!

You really really messed up the generic logo for the cardinals, unless your intent was to annoy folks from St. Louis.  That logo for St. Louis is all wrong and you could have chosen just a generic cardinal bird instead.  I get the games of throne mirroring, but even the colors for your St. Louis cardinal logo are all wrong.  Even the dodgers logo you use just feels wrong as it should have been "dodger blue & white".

Please fix your logos to actually match the color/mascot schemes used by the real teams. Better yet can't SAP afford to pay to use the real logos??