On behalf of the SAP GUI team, I am delighted to announce that SAP GUI for Windows 7.40 will be released on October 8th. This release offers the following new features:

SAP Blue Crystal is a new visual design theme which succeeds Corbu. It is the standard theme of Fiori applications and has been adapted to the specific needs of SAP GUI. Furthermore, it is fully compatible with the previous themes and comes with a new color palette and icons which are better scalable. The background texture has a stroke pattern in white and light blue with a gradient layer. The picture below shows the new Blue Crystal theme in comparison to the Signature theme which is still the default for SAP GUI for Windows: 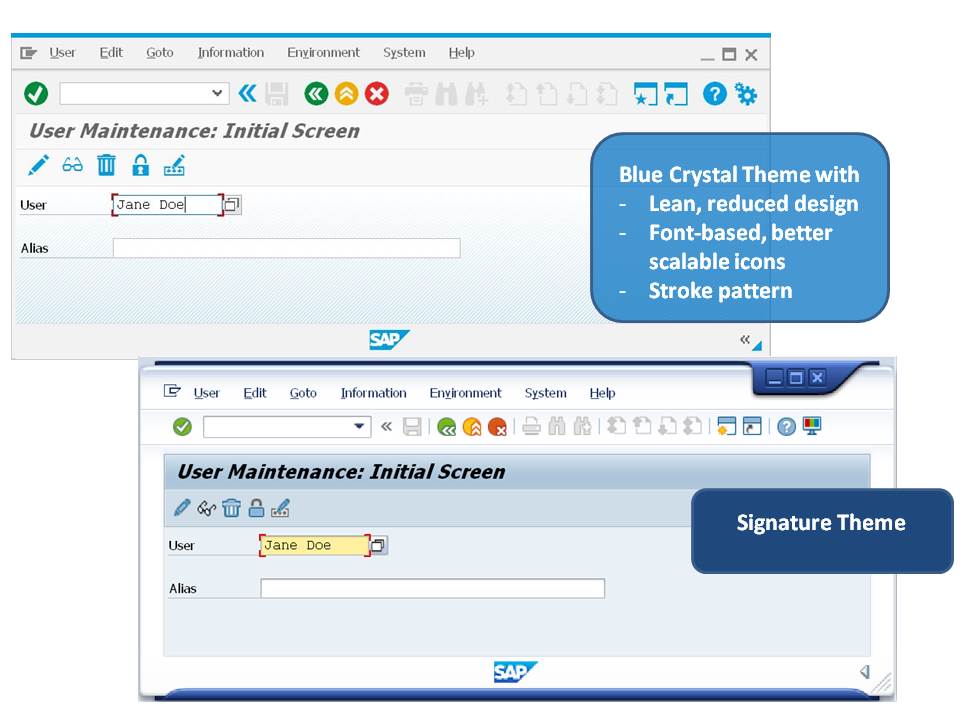 As of SAP NetWeaver Business Client (NWBC) 5.0, which is delivered on the SAP GUI DVD, SAP GUI for Windows can be embedded into the NWBC, so that the user has one shell that unifies multiple frontends. One desktop/taskbar icon consolidates NWBC and SAP GUI sessions, tasks, frequently used links etc. in a tabbed view NWBC frame as shown in the picture below. 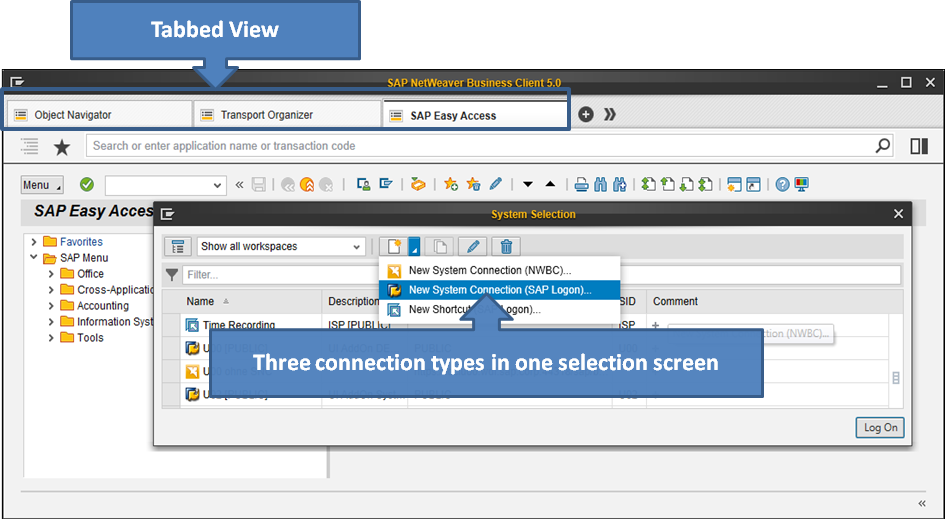 For the integration, you simply install SAP GUI for Windows 7.40 together with the SAP NetWeaver Business Client (NWBC) 5.0.  This has the following advantages:

Note: At the moment, these new configuration features are only available when using SAP GUI together with NWBC. However, in the long run, this procedure will become the default for all SAP GUI installation and configuration scenarios.

Registry values can now be set on installation package level, for example, for the following SAP GUI options:

You will find the whole list on the package configuration tab in NWSAPSetup.

SRX enable the use of SAP GUI together with the screen reader program Jaws for Windows. The Extensions are Jaws-based scripts that make the SAP GUI accessible via the SAP GUI object model.

I note that the first patch for 740 is scheduled for the middle of December i.e. about two months time. Hopefully that will fix some of the more horrible bugs.

In regard to the obvious problem with the ABAP editor, it seems to me there are several possible reasons why the 740 GUI was shipped in such a state that this problem occurs, each reason worse than the last:-

ℹ The problem was noticed during testing, but someone decided it did not matter, it was only the customers as in "I think about my custnmers all the time, I think about how much I hate them and want them to suffer, this will be a good way of acheieving that goal". This is called being "customer centric" OR

(2) Not even one developer was involved in the testing, nobody in the testing team ever so much as looked at an ABAP editor screen. They can't have as anyone would noticed the problem straight away (it is literally highlighted in red) OR

(3) There was no testing OR

(4) The internal SAP system is so different from customer SAP systems that errors do not show up on the SAP internal system which would happen at a customer site. This is the worst possible scenario, as it renders SAP internal testing useless.

I wonder which of the four it was?

Have you tried Access Method G for frontend printing?

I had problems connecting via SAP Router, need to downgrade to 7.30.

You have to edit all router strings (located in Router xml elements) and remove the trailing /H/ at the end.

I appreciate your effort to help, but I think ther's need more to be done on SAP side. Also this solution won't work for fixing system IDs and more problems with this release.

If you (SAP) see there's problem with release, you should release high priority fix/patch, not to force users to do manual update of files, because not everybody is able to proceed technical procedures of this kind.

Bigger problem is, that there's problem with configuration migration from older version(s). So even if patch will be released, it won't solve all problems which current installer will make. So I think it's time to think about update of installer to avoid and fix problems. Or write some install procedure or prepare tool to backup current configuration files. And then after applying of latest patch to be able to import them correctly to fixed/patched environment. It's not possible to fix problem, when things are lost already.

Thanks for your valuable feedback. We are working to fix the mentioned problems as soon as possible.

Thanks Vasil, you are doing a great job. I however feel that SAP should step up and release a hot fix right now for the most apparent discovered bugs, not let customer wait until half of December. I don't think it can get much worse than what it is currently...

In SAP BW (7.30), we see no buttons in the navigation panel in the Data Warehouse Workbench (RSA1) with the Blue Crystal Theme.

Nice to finally see the option "Stop transaction" ! However, when you try to close a tab where a transaction is running (e.g. when you made too big of a selection), the tab will be inactive and the process is impossible to terminate (except for SM50/SM66)...

thank you for all the feedback that you have provided within this blog (be it negative or positive). The issues that you have mentioned will be addressed as quickly as possible - if you have not yet received any replies from SAP for an issue mentioned by you I recommend creating a customer incident on component BC-FES-GUI so that the issue can be properly addressed and tracked.

I will now close this blog for further comments.