1. Crawl metadata of new release movies as well as social media data and insert into SAP HANA in real-time

2. Use the text analysis feature of SAP HANA to analyze the social sentiment

3. Build some fancy UIs to expose the result of sentiment analsyis

Actually, what I want to share with you in this series is the second version of this smart app. If you are interested in the first version, you can have a look at Real-time sentiment rating of movies on SAP HANA One. You may ask why I want to build the second version and what’s the difference between the first version and the second version. So, I’ll answer this question first. I’ve already explained some reasons in Use XSJS outbound connectivity to search tweets. The first version was built with SAP HANA SPS05 and at that time XS Engine does not support some advanced features such as Core Data Services (CDS, since SPS06), Outbound Connectivity (since SPS06) and Job Scheduling (since SPS07), etc.. Without these awesome features I could only use some external tools/methods to finish some part of the app, e.g., I used Twitter4J to crawl tweets which means I used Java in the first version. With the rapid development of XS, now I am able to build the smart app with pure XS which means now I can build the pure SAP HANA native application. That’s the major motivation why I want to rebuild the smart app and share with you. The second reason is that I’m not satisfied with the UI of the first version. I’d like to build a more fancy UI and the app should be able to run on mobile devices. Besides I also fixed some bugs in the first version. I’ll also show you in the series later.

I can’t wait to share with you. 🙂 Are you ready? Now let’s start!

1. A running SAP HANA system, at least SPS07, since Job Scheduling was introduced since SPS07. I am using SAP HANA SPS08 Rev. 80.

In the series of “Real-time sentiment rating of movies”, I won’t explain basics about XS, for example how to create XS project, how to commit/activate your design-time object and some basic concepts. If you are new to SAP HANA XS, you can first have a look at the following blogs/materials/references.

Before we start to develop the smart app, we need to first do some research work or some tests. The most important thing is that we need to figure out which APIs we can call to get the metadata of new release movies and the social media data, e.g. tweets. I’ll still use Rotten Tomatoes API – Welcome to the Rotten Tomatoes API and Twitter Developers as the data sources which I used in the first version of this app. Now let’s have a look at which APIs we need in our app.

Among Rotten Tomatoes API – API Overview, we can find that we can get new release movies of current week via Rotten Tomatoes API – Opening Movies. There are some parameters you can configure, e.g., limit the number of movies to return. Let’s give it a shot. The URL is http://api.rottentomatoes.com/api/public/v1.0/lists/movies/opening.json?apikey=[your_api_key] You can find your API key from http://developer.rottentomatoes.com/apps/mykeys if you’ve already signed in. 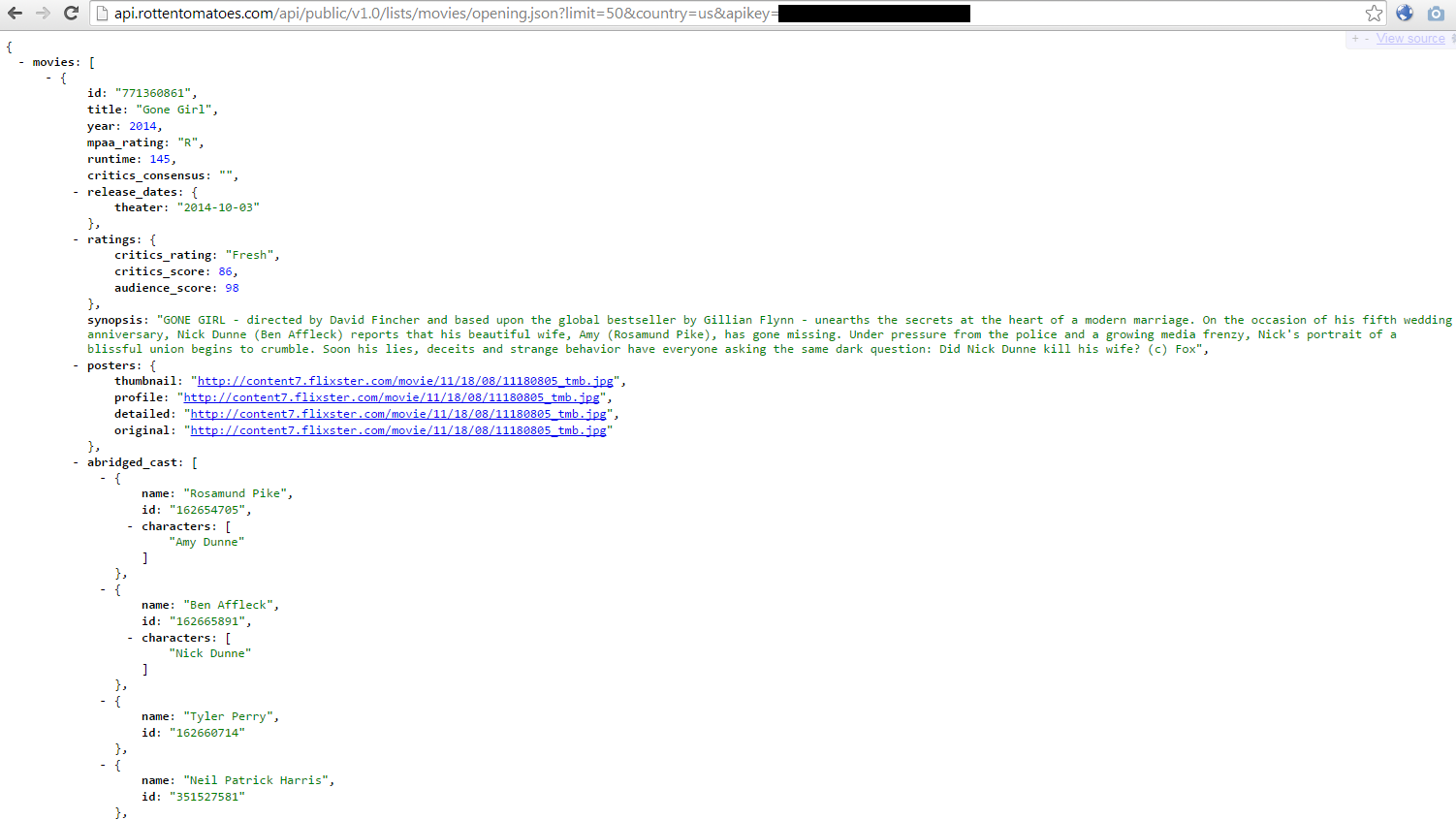 It works! 🙂 However, we need some details of movie metadata which is not included in this API call, e.g., the director, studio and genres of the movie. Don’t worry! There is another API we can use, Rotten Tomatoes API – Movie Info With this API, we can get all information about a certain movie as follows. 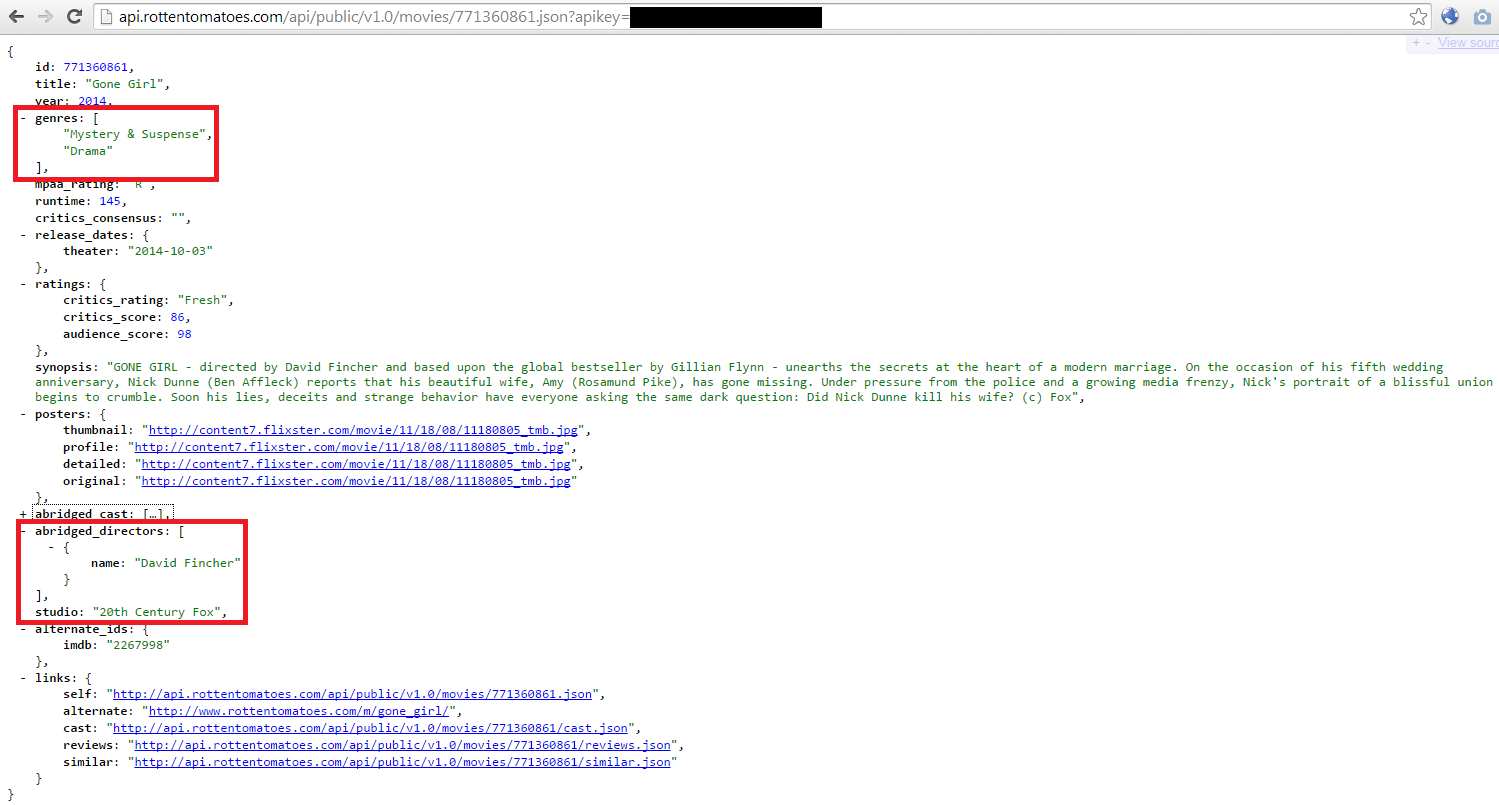 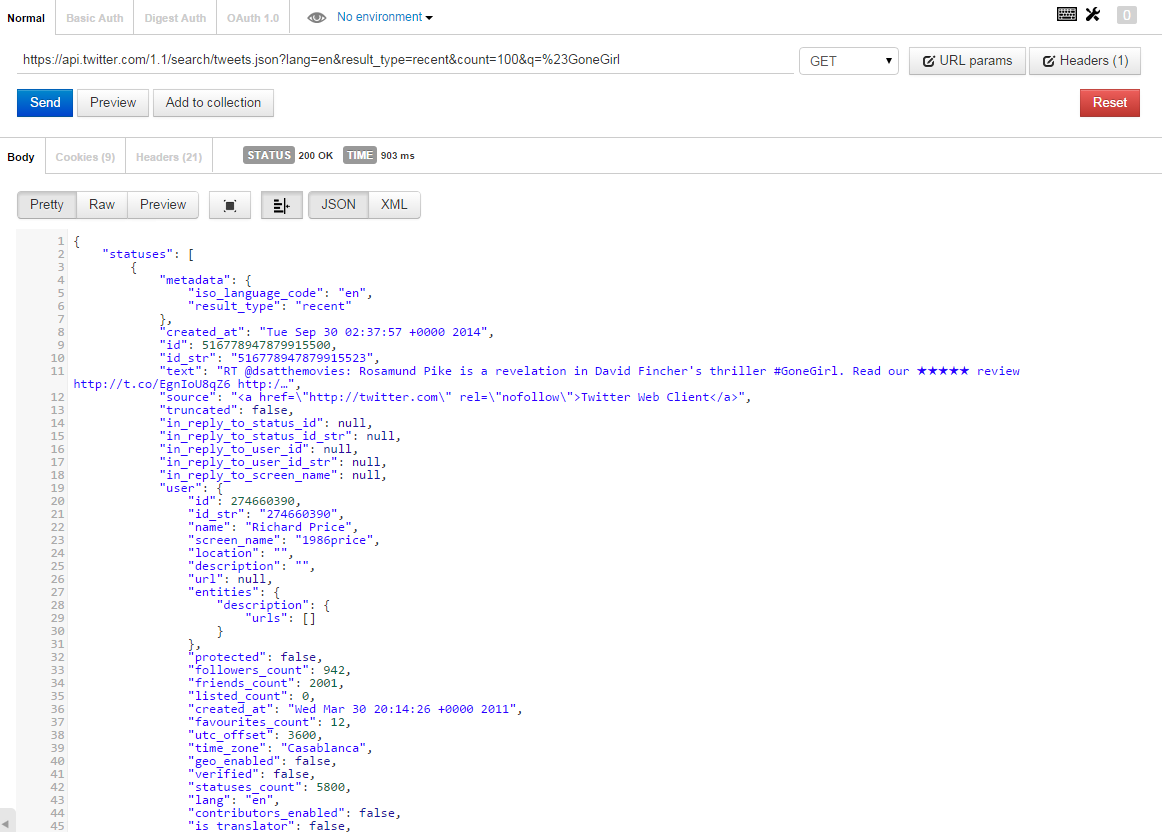 OK. In short we need the following three APIs in our app.

Now we can start to develop our smart app with SAP HANA XS. First of all, we need to create XS project, then add .xsapp and .xsaccess. Since we want to build a pure SAP HANA native application, we can use .hdbschema and .hdbdd these two artifacts to create our schema and tables.

You can find there are five entities as follows which means after the activation there will be five corresponding runtime tables under schema “MOVIE_RATING”.

– For “hashtag”, it’s an improvement in the second version. We can generate a hashtag for each movie with the following three advantages.

1. Hashtag means a topic/keyword in Twitter. See Twitter Help Center | Using hashtags on Twitter It’s common to “hashtag” movie titles in tweets. So, we can use the hashtags of movies to search tweets instead of movie titles in plain text.

– For “timestamp”, we use it to record when we crawl this movie.

– For “since_id”, in order to only search new tweets of each movie, we will use it as a parameter to search tweets. See GET search / tweets | Twitter Developers

Since movies and genres/cast/directors have n:m relationship, we can store this info in additional mapping tables. For simplicity, we do not store the info about actor/actress/director, so we do not create tables for these entities. If you create tables about actor/actress/director, you can use associations in CDS. See Create an Association in CDS – SAP HANA Developer Guide – SAP Library

First of all, you can find the JSON format of tweet object returned from Tweets | Twitter Developers. As you can see, we just store info what we need in our smart app instead of all information of a tweet object.

– For “id”, we use “id_str” instead of “id”. You can find the reason from this thread Google Groups

– For “created_at”, “text”, “source”, “user_screen_name”, “user_profile_image_url”, we can get them directly from GET search / tweets | Twitter Developers

– For “movie_id”, we need to record which movie this tweet mentioned.

– For “timestamp”, we use it to record when we crawl this tweet.

After the activation, you may find five tables are created under schema “MOVIE_RATING” in run-time. However, now you cannot do select/insert/update/delete operations on these five tables, since both design-time objects and run-time objects are owned by the technical user _SYS_REPO. 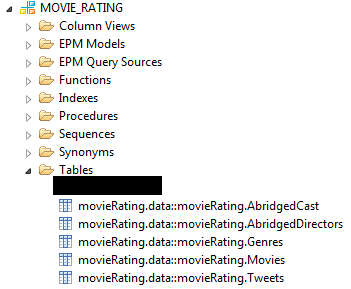 Till now, we’ve created several tables in our smart app. In the next blog, we will first create few roles and grant these roles to some users, so that they can do select/insert/update/delete operations on these tables. Then we will use Outbound Connectivity and Job Scheduling features to crawl metadata of new release movies from Rotten Tomatoes API and tweets from Twitter API in real-time!

Hope you enjoyed reading my blog. 🙂