Recently, SP8 for SAP BW 7.4 has become generally available. This new release of SAP BW brings a number of important changes to the SAP BW landscape from a modeling perspective.

Introduction of the Advanced DataStore Object

The Advanced DSO consolidates DataStore Object, PSA, InfoCube and Hybridprovider functionality into a single object and completely replaces both objects in newly to be developed data flows.  The Advanced DSO:

The Advanced ODS however, does not seem to be available directly after upgrading SAP BW to 7.4 SP8. Modeling the Advanced DSO in the Eclipse-based environment is only available from release 1.5 of the BW modeling tools, due to be released in October 2014. As of yet it is unclear if workbench access to this functionality will be available before the release of BW7.4 SP9.

UPDATE: both SAP BW NNW 7.4 SP9 and the BW Modeling Tools 1.6 have been released by now, and this functionality is fully available. For details, please see SAP First Guidance – Implementing BW-MT for BW-aDSO by Roland Kramer

With SAP NW BW 7.4 SP8 several enhancements have been made to the Composite Provider. These are:

A first check on our demo environment* reveals that it is only possible to create a CompositeProvider with a JOIN operation which includes Open ODS views, when the ‘Calcscenario used’  property in the Open ODS view is set to ‘yes’. This is not possible for all Open ODS View sources. * Intenzz Demo system details:

With the new functionalities the Advanced ODS (ADSO) offers and the new enhancements in the CompositeProvider, the SAP BW modeling landscape is simplified in a drastic manner. Using the new development objects, only four BW Modeling object types remain to be used. The InfoObject and ADSO act as building blocks for everything persistent, the CompositeProvider and Open ODS view for everything virtual. 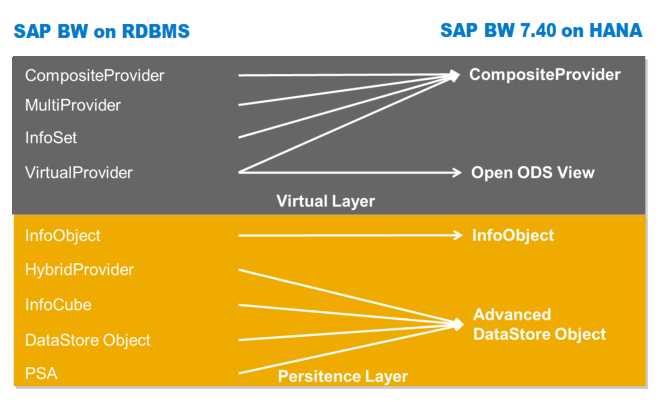 The main advantage SAP NW BW 7.4 offers over SAP NW BW 7.3 is the fact that next to the data and activation processes, Transformation logic has been pushed down to the HANA database as well. This provides a huge performance improvement for transformations. In SP8, the number of supported formulas has been enlarged, and ABAP managed database procedures are now integrated as well.

Generation of HANA models based on BW InfoProviders and Queries have been further developed, introducing the following enhancements:

With SAP NW BW 7.4 SP8, a number of really interesting new features should be available. Assessing these new features in our demo landscape however, we found not all new functionalities to be available yet. This raises the question what is available and what isn’t at this point in time and subsequently, and SAP’s plans are regarding the missing functionalities.Unavailable features in SP8:In the previous sections, the new features were listed and explained briefly. In order to avoid to make a list of these features again, you will find only those that are not yet available below:

With regard to the Advanced DSO it is at least expected with the release of SP9 later this year (probably December). It is expected a future release will also support conversion of existing InfoProviders to Advanced DSO’s. If this functionality will be available in the short term however, is unsure.

See below the future planning as announced by SAP earlier this month: 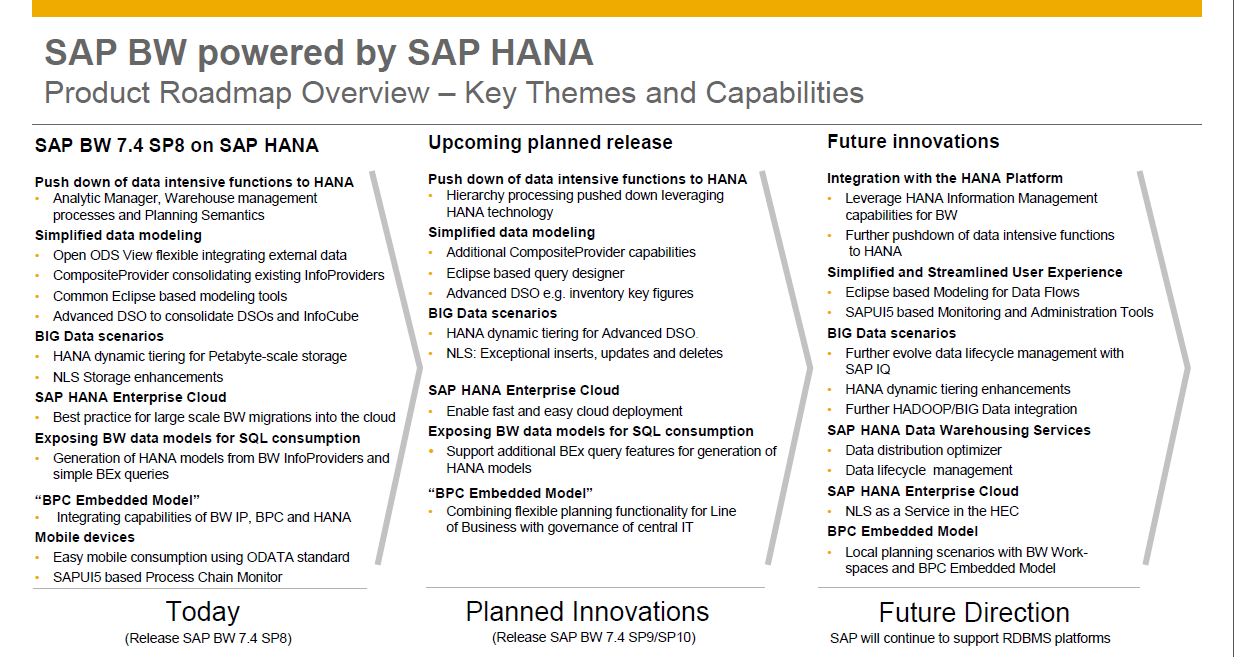 Nice blog and thanks for posting up to date and consolidate information.

Thanks and seeing your shared doc.

Thanks for sharing this info, nice blog.

This is very useful to me. 😎

Thank you mr. Koersen, glad to be of service 😉

Thanks for the great Blog.  Very informative.

Yet it seems this query designer won't be available until SP9.

Would you be able to confirm that ?

For details on Query designer in Eclipse.

This is nice document, Thanks for the sharing...

This is nice document, Thanks for the sharing...

I am beginner on BI, and your document is very useful.

After the reading I have 2 questions :

1.Do you have example of how the new transformation will be implemeted on BW 7.4 ?

"...The main advantage SAP NW BW 7.4 offers over SAP NW BW 7.3 is the fact that next to the data and activation processes, Transformation logic has been pushed down to the HANA database as well. This provides a huge performance improvement for transformations. In SP8, the number of supported formulas has been enlarged, and ABAP managed database procedures are now integrated as well....."

2. Where do you find informations on new SP features ?